Members of the Riders of the Philippines (ROTP) group rode to the Senate offices in Pasay City to hand over their opposition letter to the Senate’s Motorcycle Crime Prevention Act of 2017 (SB 1397), dubbed by riders as the ‘Doble Plaka’ law now undergoing a bicameral. It is just a few steps away from becoming ratified as a law.

The group submitted its position paper to all of the senators' offices, including the primary author of the bill, Senator Richard Gordon. The letter has been received by the offices.

In its position paper, the group alleges that the bill, now undergoing a bicameral and just a few steps away from being ratified as a law, requires all motorcycles to fit a license plate both in front and behind. The plate is estimated to be approximately 200 mm x 225 mm (7.8 x 8.8 inches) in size or possibly larger. The group noted that it is larger than the European standard plate for motorcycles.

The group is opposed to the provision for fitting two plates on that grounds of (additional) cost, lack of fitment provisions in current and past motorcycle models, safety, and potential discrimination of such large plates. Riders, manufacturers, and dealers have already expressed concern over the provision, citing that a front-mounted plate may be unsafe for the rider if improperly mounted; its size is costly to implement; difficult to fit in both current and past models; and potentially discriminatory to motorcycle riders as it paints all riders as potential criminals. 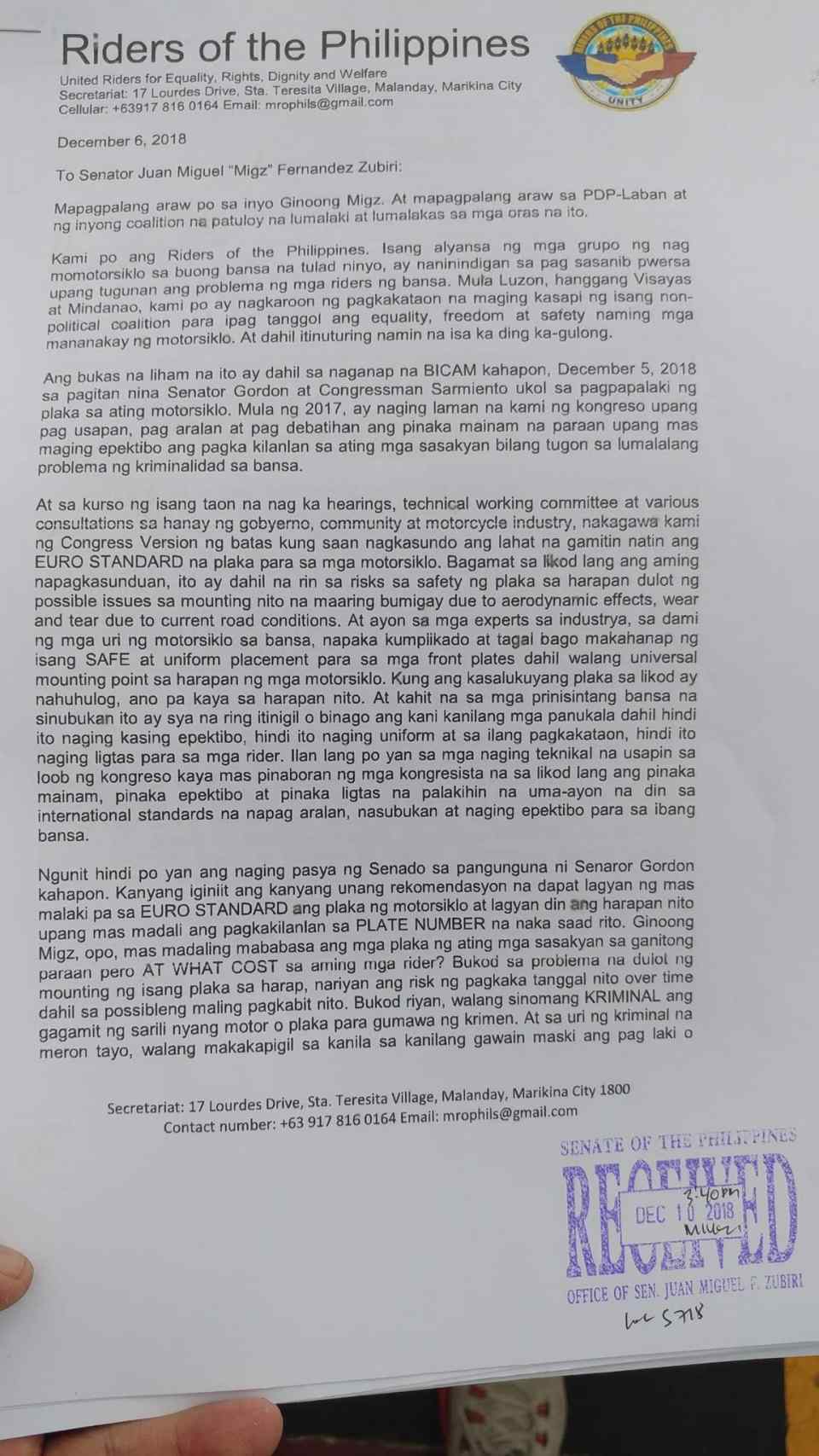 The paper hopes to convince the Senate to "consider the Congress’ version which is only one plate number for the rear and is based on the European standard that passed safety tests, and was drafted along with the consultation from concerned stakeholders – manufacturers, motorcycle dealers and the motorcycle community..." said one of the group's most vocal members, Jobert Bolanos. The group alleges that the two-plate provision was pushed by Sen. Gordon during the bicameral meetings.

"If this does not convince Senator Gordon... then we have no choice but to go to the Office of the President,” he said.

The group hopes the recipients will consider their position. It will also stage a peaceful demonstration on Sunday, December 16, to voice their opinion on the provision proposed by Gordon.

The Supreme Court has issued a TRO against the RTC injunction that allows Angkas to operate. BMW joins the midsize scooter battle with the C 400 X, and spruces up the R NineT with Option 719 packages.