Angkas may be halted from picking up passengers again as the Supreme Court (SC) has issued a temporary restraining order (TRO) against the Mandaluyong court injunction that has allowed Angkas to operate.

This grants the Land Transportation Franchise and Regulatory Board (LTFRB) the authority to block Angkas operations and apprehend Angkas riders caught taking on passengers. 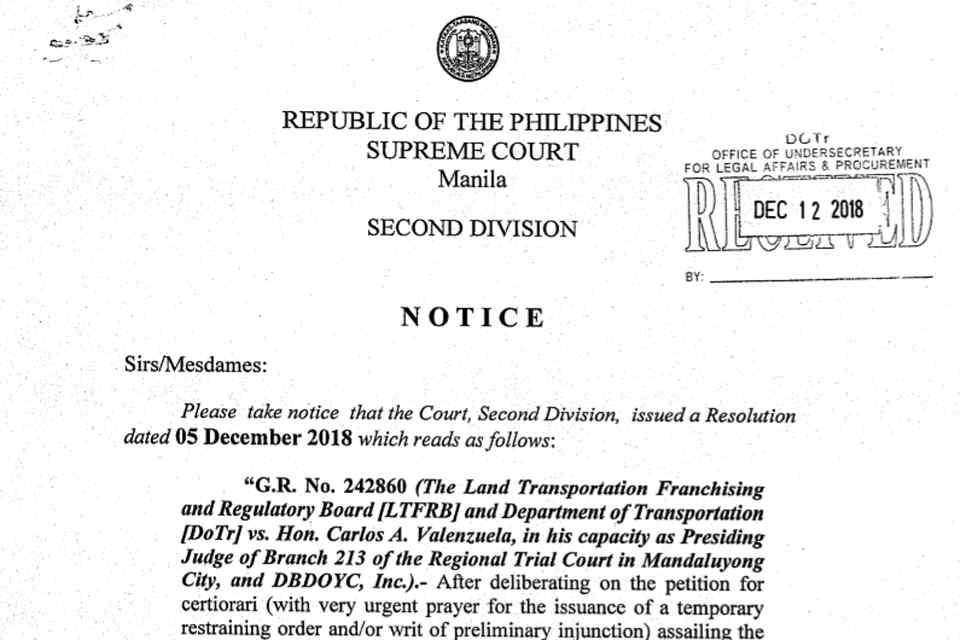 "Now, therefore, effective immediately and continuing until further orders from this court, You [LTFRB], the respondent [Angkas], the Presiding Judge, Regional Trial Court Brach 213 Mandaluyong City, your representatives, all other persons acting on your behalf are hereby RESTRAINED from implementing the assailed RTC order dated August 20 2018 in Civil Case No. R-MND-18-01453-SC," the SC order said.

Angkas has repeatedly clashed with the Department of Transportation’s (DOTr) LTFRB with regards to its authority to operate. In November 2017, the LTFRB suspended Angkas from taking on passengers, citing that two-wheeled transport, such as motorcycles, cannot be used for public conveyance according to the law.

In August this year, the Mandaluyong City Regional Trial Court granted a preliminary injunction to Angkas, preventing the government from interfering with its operation. The LTFRB has since filed an appeal against this.

The Supreme Court decision is in response to the appeal, allowing the LTFRB to once again prevent Angkas from taking on passengers.

The LTFRB will be issuing an order to Angkas to cease its passenger hailing operations. It will also issue an order its officers to once again apprehend any Angkas riders taking on passengers.

The DOTr will begin apprehension of Angkas riders found accepting passengers within the day. The Riders of the Philippines (RoTP) group rode to the Senate to oppose the two-plate provision in the Motorcycle Crime Prevention Act now in bicameral.