PAMSS justified its claim by presenting its official accreditation by the Philippine Sports Commission (PSC), the government agency for sports attached to the Office of the President of the Republic of the Philippines. The accreditation was made pursuant to PSC Board Resolution No. 019(B)-2017, and further affirmed as such under Board Resolution No. 921-2017, and signed by PSC Board Secretary, Julia Llanto. PAMSS has already applied for affiliation with the Fédération Internationale de Motocyclisme (FIM) — the global governing body for motorcycle sports and a Fully Recognized Member of the International Olympic Committee (IOC) — and expects to receive it by November this year.

Present at the event were PAMSS President, Ruby Ann Kagaoan; Founding Trustee and Corporate Secretary, Atty. Tony Abad; VP, Michell Turk; and Chito Poblete of Total Philippines, as well as representatives from various motorcycles manufacturers and distributors, such as Suzuki Philippines and Harley-Davidson of Manila.

“The Founders of PAMSS fought with everything they have got, risking all that mattered to them, even their lives and careers, to see this very day happen when they can finally officially represent the country as the motorcycling national sport association (NSA), to unite the Philippine motorcycle sports community, and be a driving force in bringing unity and peace to our country through sports,” said PAMSS President, Ruby Ann Kagaoan.

For more than two decades, Philippine motorcycle sports have been governed by the National Motorcycle Sports and Safety Association (NAMSSA), headed by its, President, Stephan ‘Macky’ Carapiet. NAMSSA was the accredited governing body under the PSC, and was also recognized by the FIM. 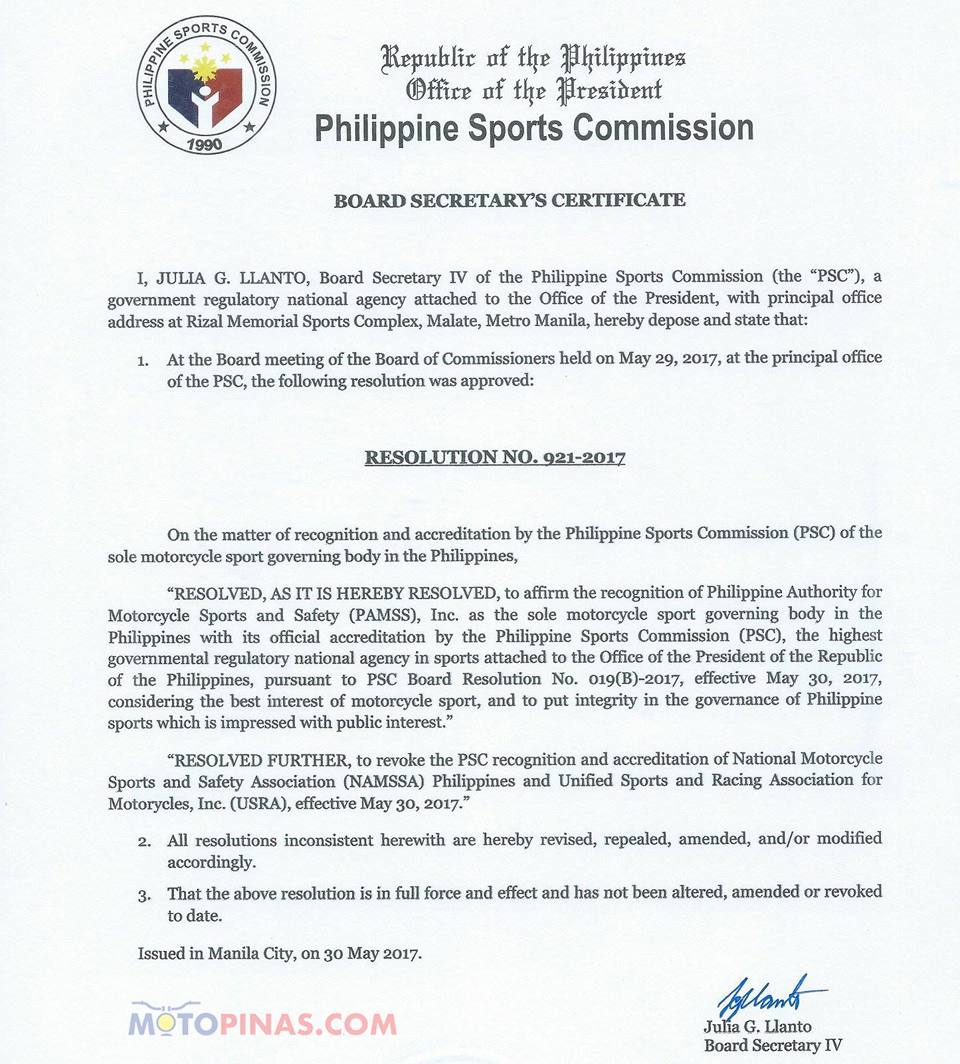 During the press con, however, PAMSS also presented Board Resolutions from the PSC that revoke the accreditations of NAMSSA and USRA. With the paperwork presented, PAMSS hopes legitimize its claim as the sole regulatory body for all motorcycle sports, covering all engine displacements, power sources, and even three-wheeled motorsports. This would effectively make the organization the new motorcycling National Sport Association (NSA). It also hopes to form a more coherent national advocacy for motorcycling and road safety. Besides this, PAMSS also hopes to establish a more linear ascension program for riders hoping to graduate from Philippine motorcycle racing into the international scene through a licensing structure compatible with and modeled after international standards.

Among its first projects is the aim to bring the Motorcycling World Championships to the Philippines, through an event called the Philippine Motocross Grand Prix, making the country a stop in the prestigious racing series.

PAMSS however has to resolve any questions that might arise over the current crop of racing series that are alreay running in the country's racetracks, operated by the Batangas Racing Circuit Association (BRCA), which manages majority of the country’s race tracks (Clark International Speedway, Batangas Racing Circuit, Carmona Racetrack, and a circuit in Palawan). Its current motorcycle racing series are under the oversight and governance of the USRA and SBRA.

The BRCA, USRA, and SBRA have yet to make statements regarding the recent turn of events. Ducati unveils 1299 Panigale R Final Edition with the tagline, “When the End Tells the Whole Story”.