Though typically associated with regional automotive launches, the Bangkok International Motor Show (BIMS) is also a highly anticipated event in the motorcycle industry’s calendar. With a good one-third of the total floor space dedicated to motorcycle displays and booths, the BIMS continues to serve as a vital barometer of regional motorcycle trends, as well as a preview venue for models that could be coming soon to the Philippine market. 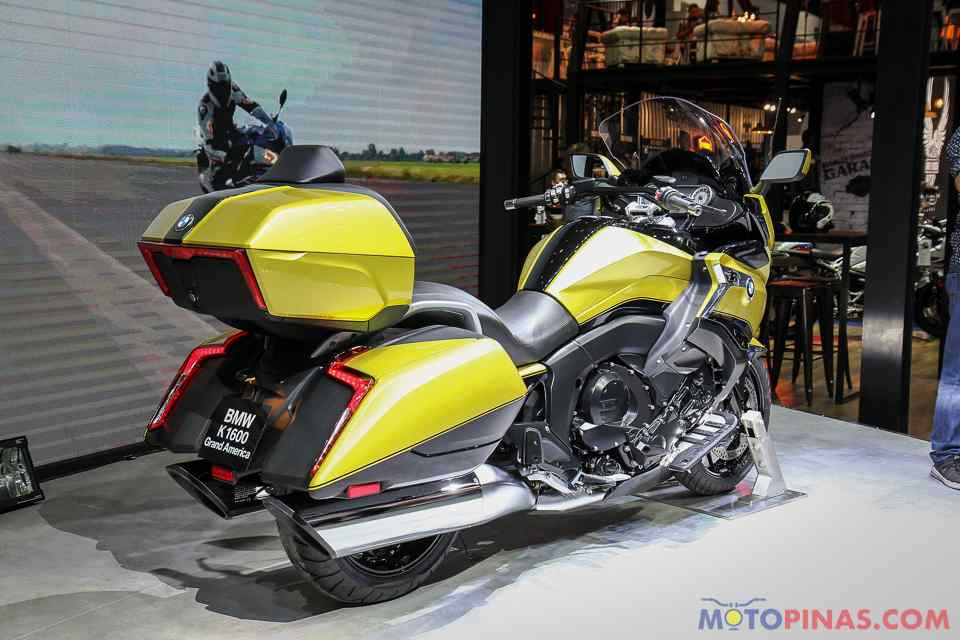 BMW Motorrad has always had a strong presence in Asia. Its new shift towards broadening its offerings by producing multiple models from the same platform is becoming apparent. If last year, we were treated to a veritable buffet of R-NineT variants, this year Motorrad decided to put forward its GS line, with its latest model which was recently launched in the Philippines, the G310 GS, headlining the booth. 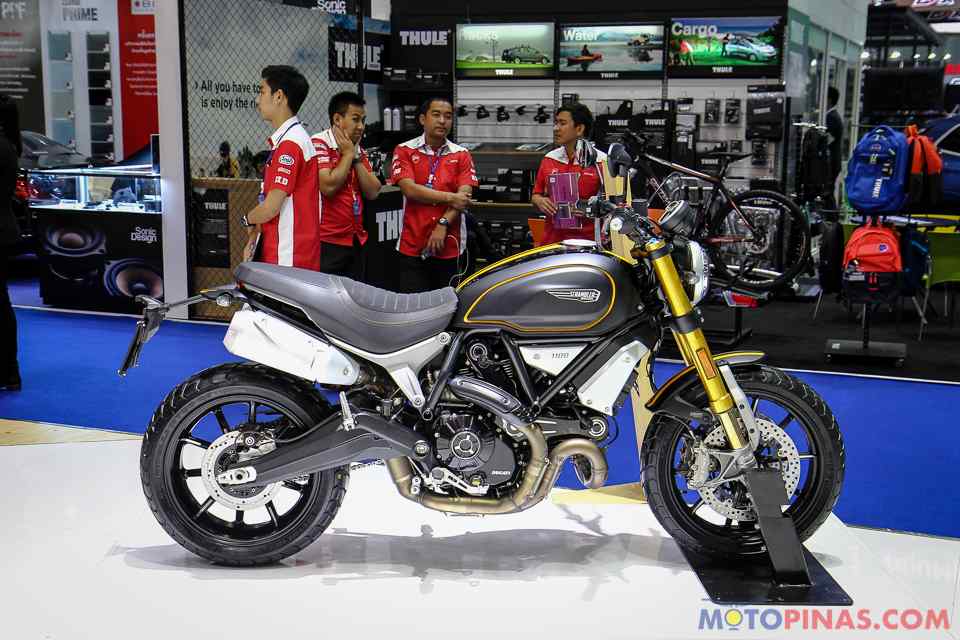 Ducati easily had the most to show off, with a wide variety of new models on the show floor. Most notable was the new Scrambler 1100, adding some much needed power to the new and popular line. Ducati has also been wise to enlarge the fuel tank as well as add a few more functions to that spartan speedometer.

Also present was the new Monster 821, presented in a long forgotten Ducati color: yellow. The Monster gets some much needed software upgrades like new ride modes and an all color TFT LCD screen, making the formerly sparse mid-level bike feel a little more premium.

Naturally, Ducati’s top seller in Asia was also present, this time in limited edition trim. The Multistrada 1260 Pikes Peak adds some extra carbon fiber and racing livery to the already desirable adventure bike, with three packages to pimp it out before it even leaves the showroom. 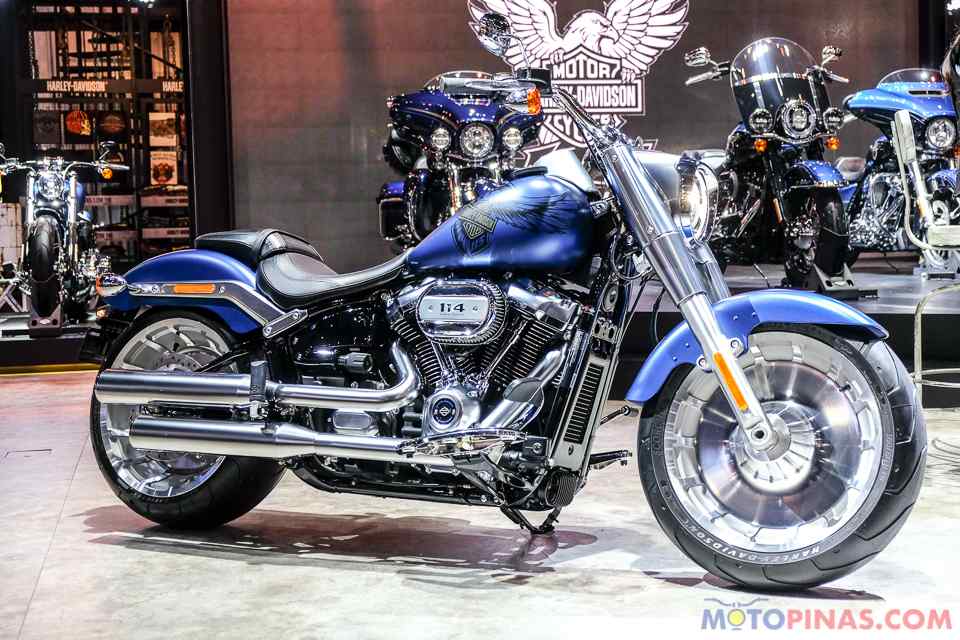 Harley-Davidson had a very complete display. Each of its lines: Street, Sportster, Softail, Touring, and CVO had a shining example on display. Unlike Japan, Thailand doesn’t appear to be as fond of the trike line, being the only model line missing. Nonetheless, all the models displayed bore special blue paint jobs in celebration of its 115th anniversary, complete with logos, badging and blue stitched seats. 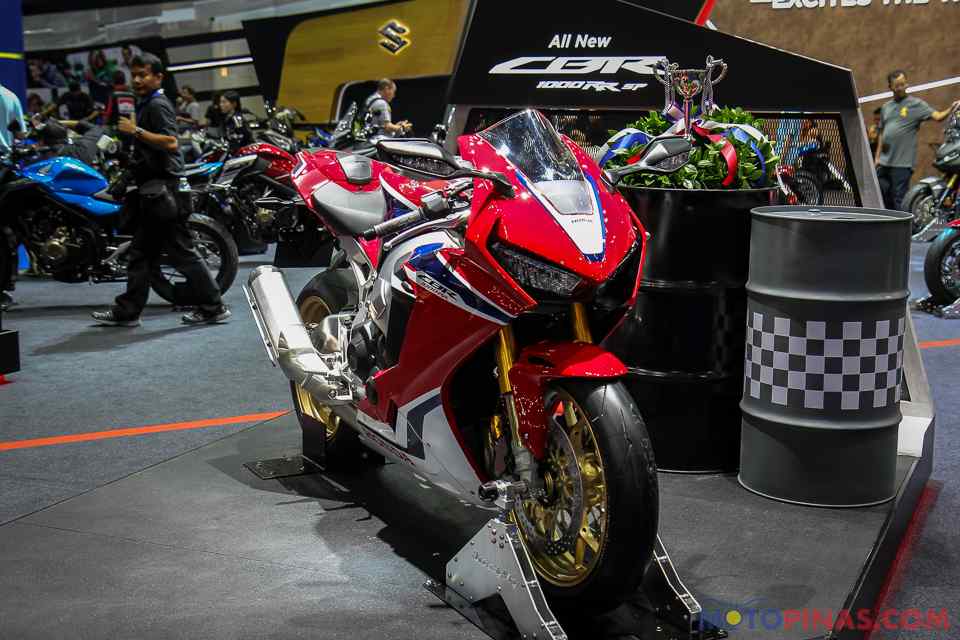 Yet another brand with a number of new models was Honda. The Japanese maker had new models for practically every niche, covering scooters, sportbikes, naked streets, and cruisers. The most notable launched were the Forza mid-size city scooter, the CBR1000RR SP sportbike, the CB1000R naked bike, the top-of-the-line Goldwing GL1800DA Tour with airbag, and an Automatic DCT, and the Africa Twin Adventure Sports. Sitting on the turn table was yet another concept called the 150SS. Bearing neo café racer styling, just like the CB1000R, perhaps it could be headed for production soon as well. 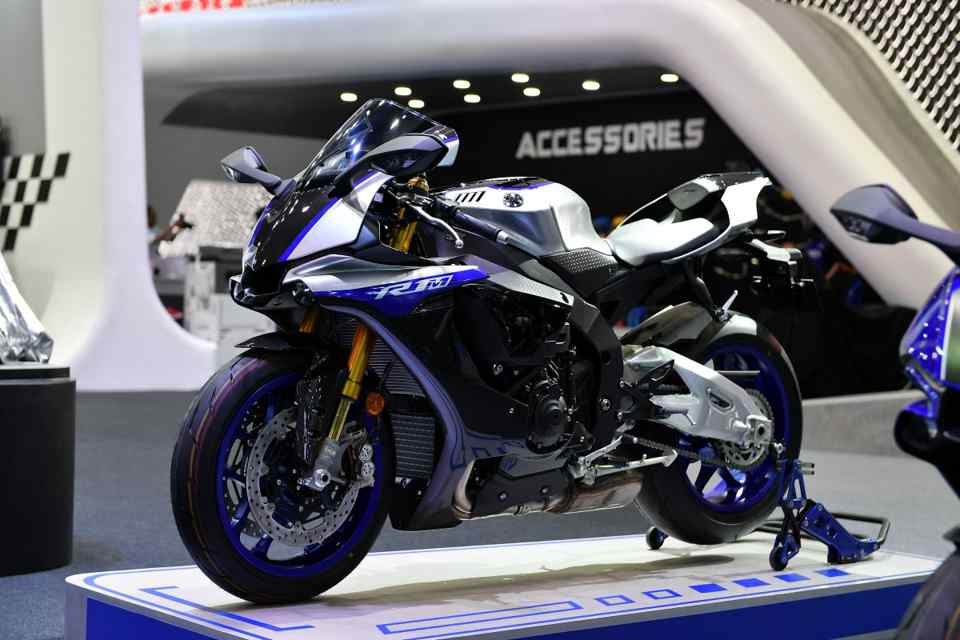 Kawasaki on the other hand showed its pride for its Ninja family. Much of the brand’s display was dedicated to the wide variety of Ninja sport bikes, all in KRT Green liveries, of course. Naturally, the latest ZX10Rs and H2s took center stage. Also present were a few of Kawasaki’s street bikes and cruisers. 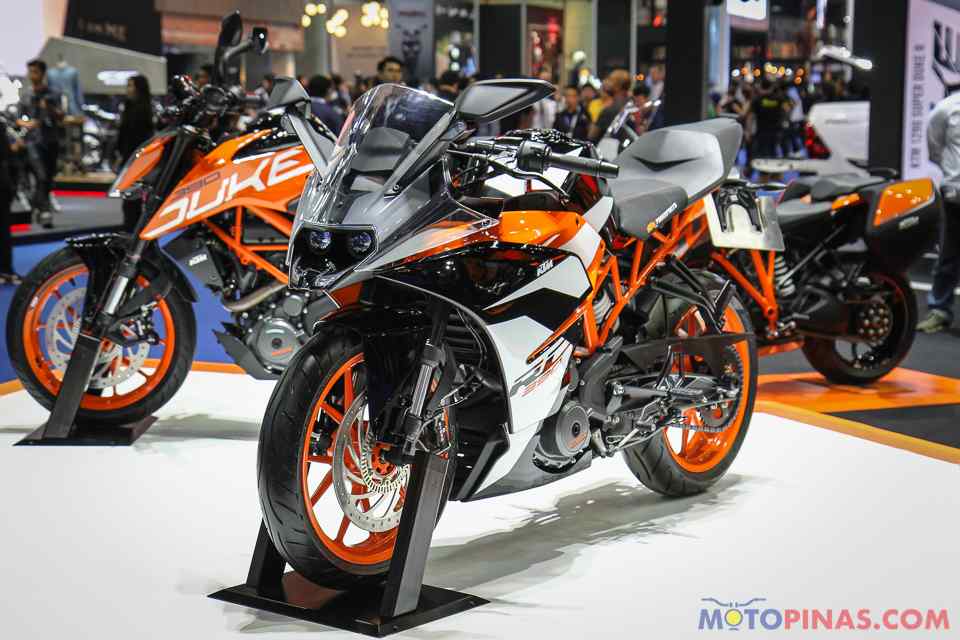 Gaining ground in Asia is Austrian brand, KTM. Easily the brightest shining of them all was the new 1290 Super Duke R. The naked sport bike features lightweight construction paired with next-level riding tech like ride modes that include a Supermoto drift mode, keyless ignition, cruise control, and a tire pressure monitoring system. Also on display was the new Duke 390, one already made available locally at the start of the year. 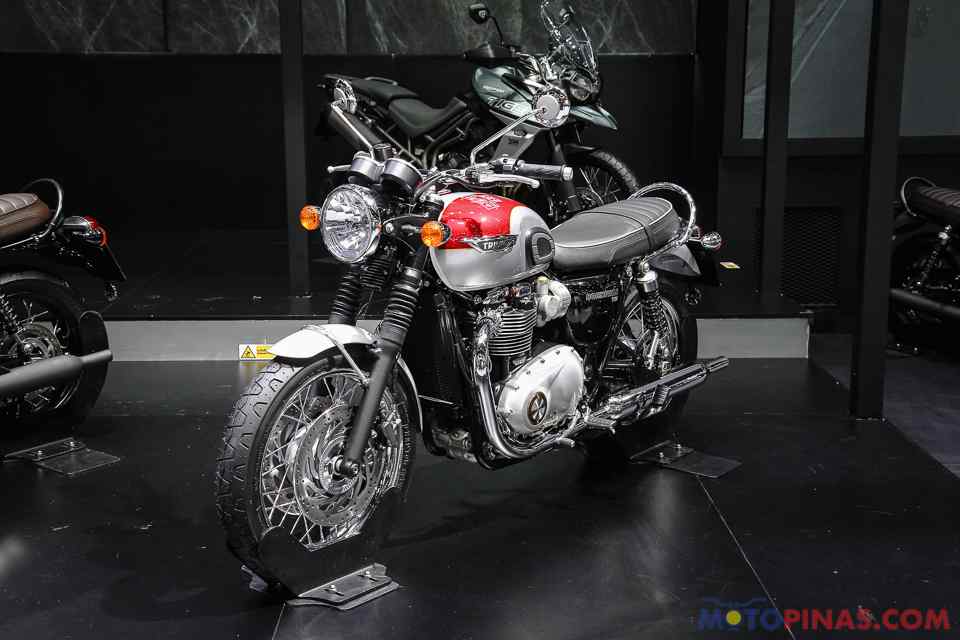 British brand, Triumph, was also present at the show, with a broad range of bikes to show off. On display were the Street and Bonneville model lines. Of course, properly taking much of the glory were its newest models, the Speed Triple and Tiger range, featuring the Tiger 800 XRX. 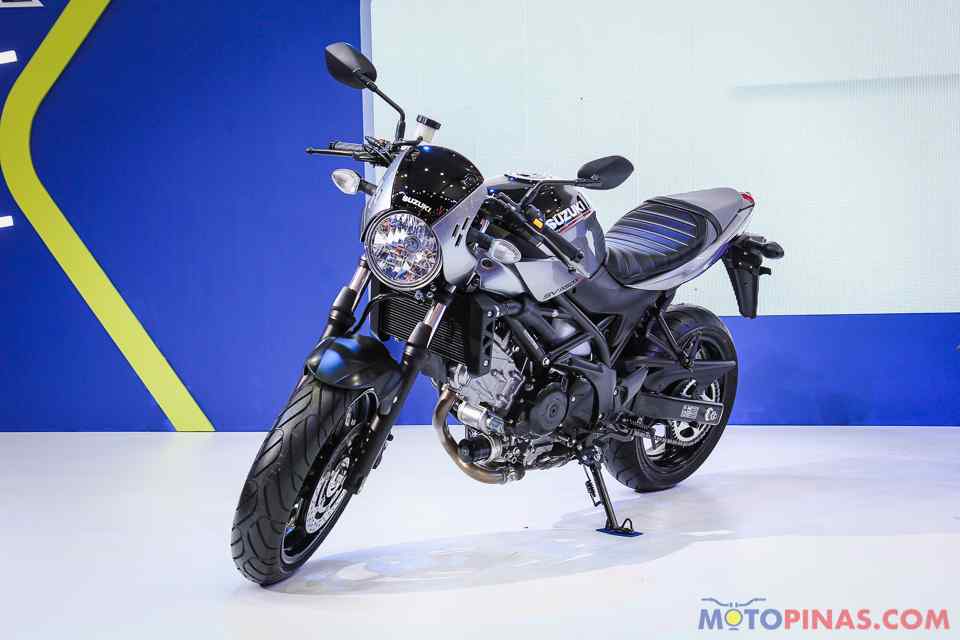 Suzuki’s booth took up a lot of space, utilizing it to show off its entire range of motorcycles. Most notable was the launch of the SV650X ABS, bearing café racer style with modern features like a dual spark cylinder head, low RPM assist, and ABS.

Another notable model on display was the C50, with the ‘50’ standing for 50 cubic inches, or 805cc to the metric world. It’s powered by a V-twin through a 5-speed transmission, powering the rear with shaft drive, serving as a worthy adversary to the Kawasaki Vulcan and Harley-Davidson Street 750. 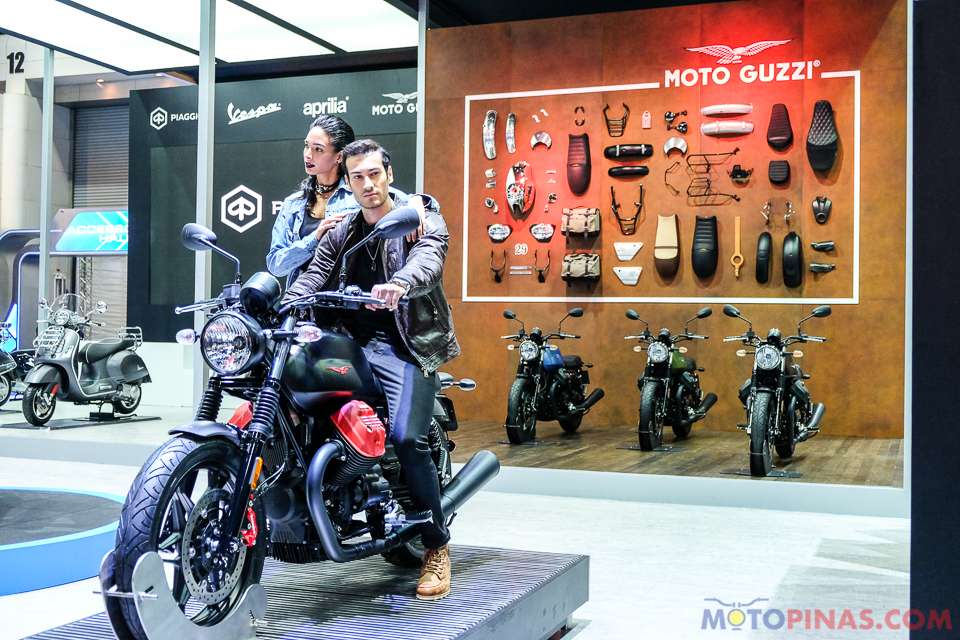 The blue brand took to the show with its own broad display. Among them, two models stood out: the R1M and Qbix concept. The carbon bodied bike is as close to MotoGP as a consumer can get, complete with similar tech used on the top tier race bikes. The Qbix on the other puts an even more futuristic spin on the already futuristic looking scooter. Little details about the concept were revealed but it was surprising to see it could be made to look even more… uh… futuristic.

Taking up the challenge was local brand GPX. Though the marque typically offers small displacement bikes, it certainly isn’t lacking in style. Among the most alluring models on display was the Demon 150GR mini sport bike, taking quite a lot of inspiration from a Ducati Panigale. Though slightly smaller in scale, it bears all the trimmings of the popular Italian bike and is likely priced much more affordably. Another interesting bike on display was the Legend Gentleman. The bike pays tribute to the Ducati Scrambler Café Racer. It’s powered by a 200cc engine and quite easily gives you the look for less.

We bring you the highlights of the recently concluded National Federation of Motorcycle Clubs of the Philippines Convention.