Is a Haojue-based Suzuki GSX-S300 coming?

Suzuki Philippines brought in its 2017 line of big bikes in an event it called, 'The Royal Arrival', held at the Suzuki Big Bike Center in Makati. Suzuki Auto-Moto Makati was converted into a launch venue for the big bikes. Five models were unveiled during the launch. 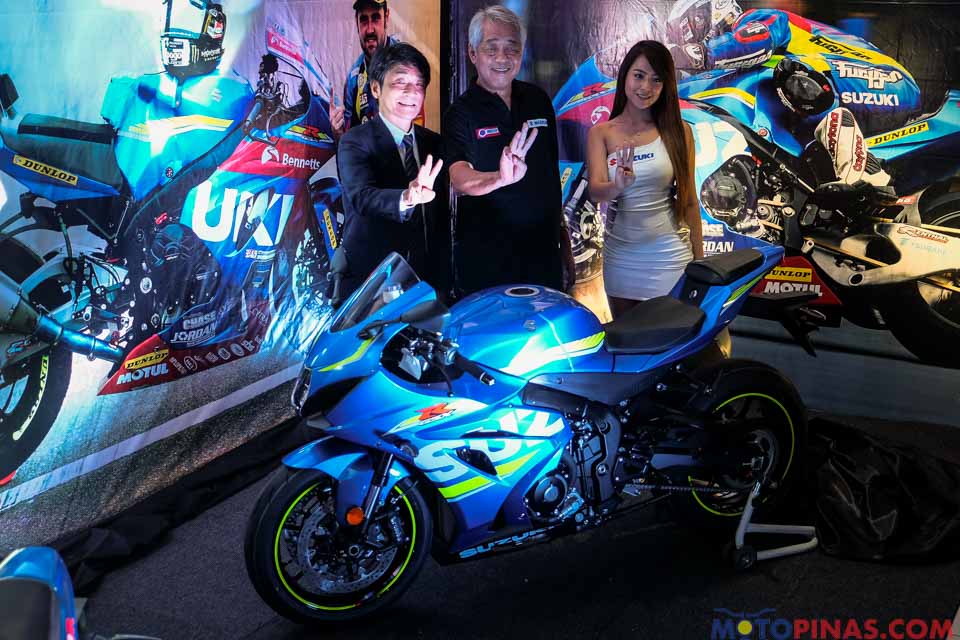 Headlining the event was the model Suzuki calls the 'King of Sportbikes', the GSX-R1000R. The bike had just recently won the Senior TT Isle of Man this year and has been designed with more than 30 years of experience in performance, innovation and domination.

This 6th generation GSX-R1000 is the most powerful, fastest accelerating, cleanest-running GSX-R yet. It is powered by a 999.8cc liquid-cooled inline 4 with Suzuki Racing Variable Valve Timing System (SR-VVT). It produces 199-hp and 87 ft-lb of torque. It's fitted into a compact and lightweight frame suspended by a Showa Balance Free Fork in front and Balance Free Rear Cushion to combine with new Motion Track ABS-equipped Brembo T-drive 320mm dual front brake rotors and Monobloc 4-piston calipers. 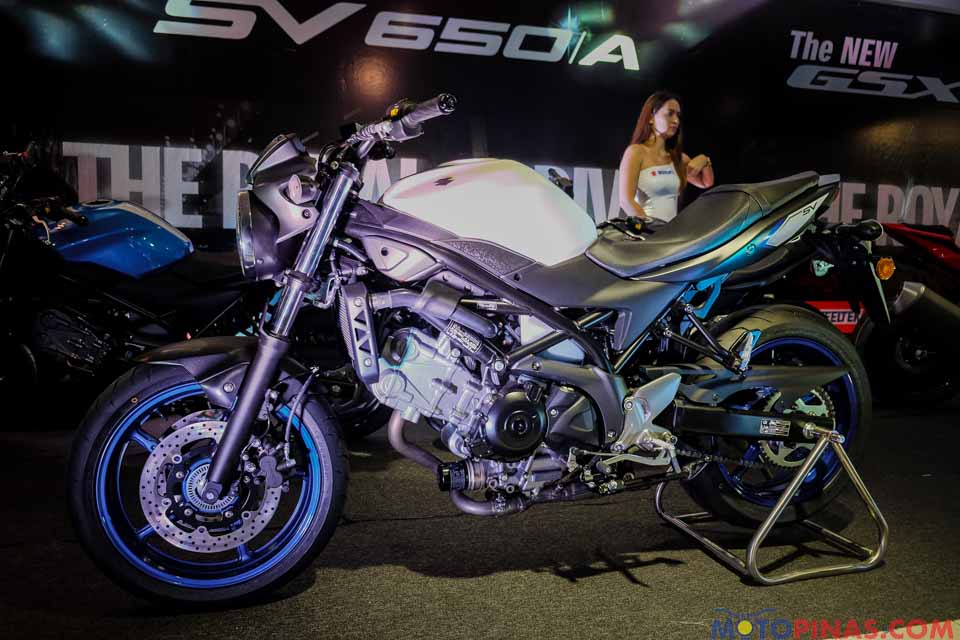 Firs previewed at the Inside Racing Bike Fest last March, the SV650A now formally joins the lineup. SV stands for Sporty V-Twin, and is powered by a 645cc engine with dual spark technology. The engine is governed by Suzuki's Dual Throttle Valve fuel injection. It's fitted into a high-strength steel frame and is designed to be both at home in the city and for touring. The bike also features Low RPM Assist Control to make pulling away from a full stop effortless. The SV650 is available in three colors with a red variant to follow later in the year. It is priced at PhP 399,000. 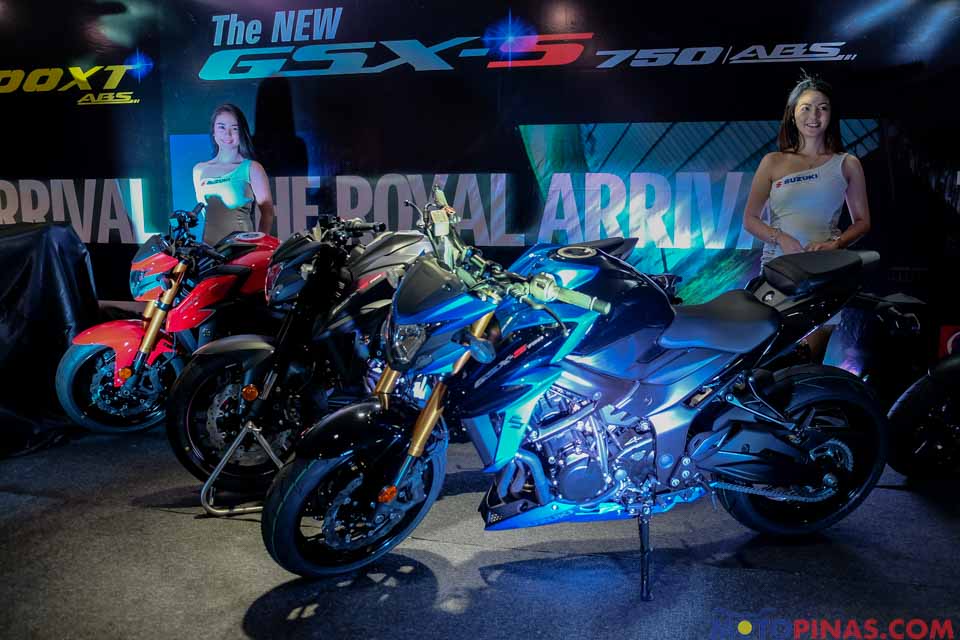 For those that prefer the intimidation of a naked spork bike, Suzuki offers the GSX-S750. It's powered by a 4-cylinder 749 cc fuel injected engine. It's paired with a 6-speed transmission. Four-piston calipers on its twin front discs and rear single disc bring it to a quick stop. Best of all, an advanced 3-mode traction control system helps reign in its power, allowing for smooth operation in the city or more aggressive response when desired. The easy-start system also takes care of firing all four cylinders without fuss. The GSX-S750 is priced at PhP 599,000. 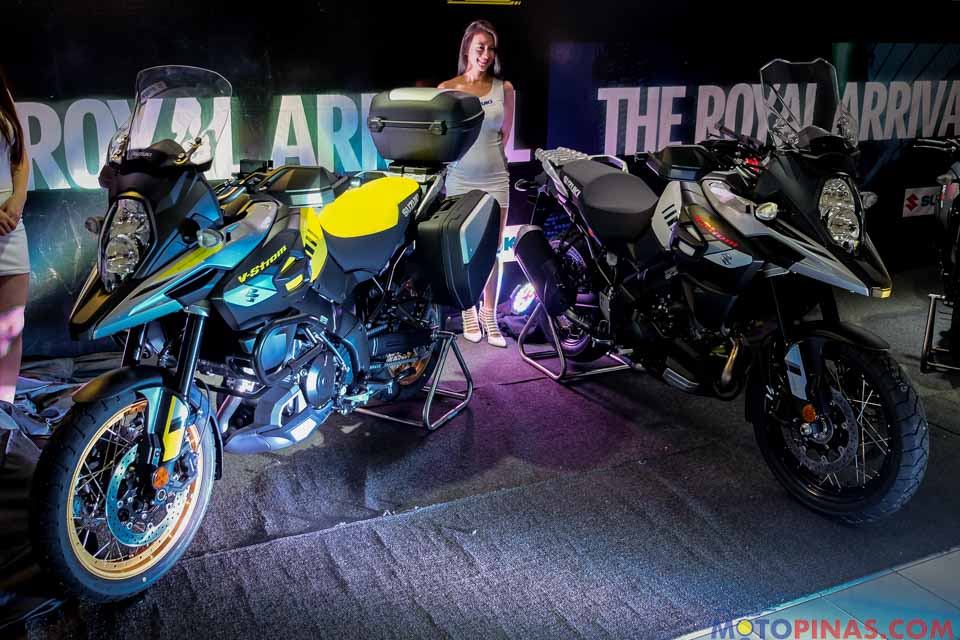 The last, but certainly not the least to be unveiled was Suzuki's top adventure bike, the V-Strom.

Among the many well-received upgrades in the V-Strom are to its stopping potential. Similar to the GSX-R, the new V-Strom features new Motion Track technology integrated into its ABS system, granting the bike 5-axis inertial measurement, which monitors the posture of the bike with the front and rear wheel speeds, allowing for optimal stability when braking while cornering — cornering ABS. It also adds Combination Brake which applies pressure to the rear brake when front brake pressure rises to a certain point.

Ensuring the wheels keep in contact with the ground is its advanced traction control system, which measures the thottle pressure applied against the current traction available to the wheels for smoother operation with out risk of slippage.

Besides the electronic aids, the V-Strom features new fairing, and lightweight construction. Knuckle Covers are now fitted as standard, as well as an Under Cowling and Rios. Like before there's also an extensive optional extras list. 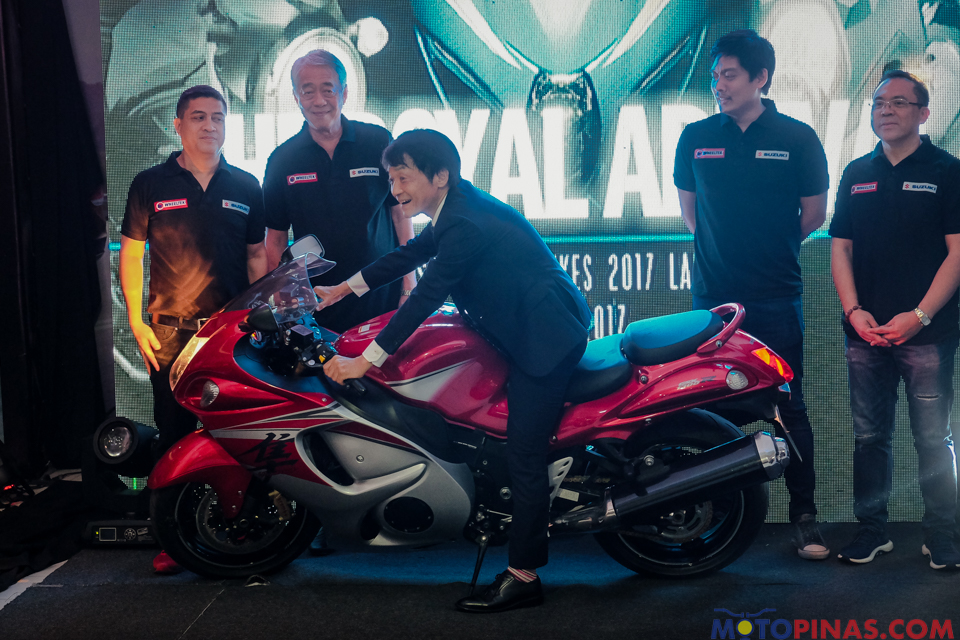 First it was Harley-Davidson, now Bajaj is optimistic about acquiring Ducati.

Harley-Davidson releases the 2017 Street Rod for the Philippine market with local pricing. Loncine fires back at Benelli with a new 1279cc civilian version of its police bike.