Expected to arrive in the third quarter of this year is the new BMW R nineT Scrambler. Its release was previously hinted at by last year’s surf-inspired Concept Path22, and more recently BMW unveiled the Dakar tribute Concept Lac Rose. The latter heralds an R80 G/S tribute of sorts within the new R nineT lineup. An adventure trim as well as a sporty version will be included in the three new R nineT spin-off models announced; the additions to the expanded Heritage line will debut at EICMA later this year. The bikes will also get some technical updates to comply with Euro4 regulations.

The R nineT is a retro-modern motorcycle with ABS, built around an air-cooled 1170cc flat-twin boxer and introduced back in 2014. BMW Motorrad took care to build their vintage-inspired R nineT range with customizability in mind. For example, every R nineT comes with a bolt-on subframe that can easily be removed as well as access to a range of original BMW accessories. The modular configurability of the bike gives custom builders more ease in making their own adjustments and new parts from scratch—something that BMW openly encourages with their own commissioned collaborations with shops. 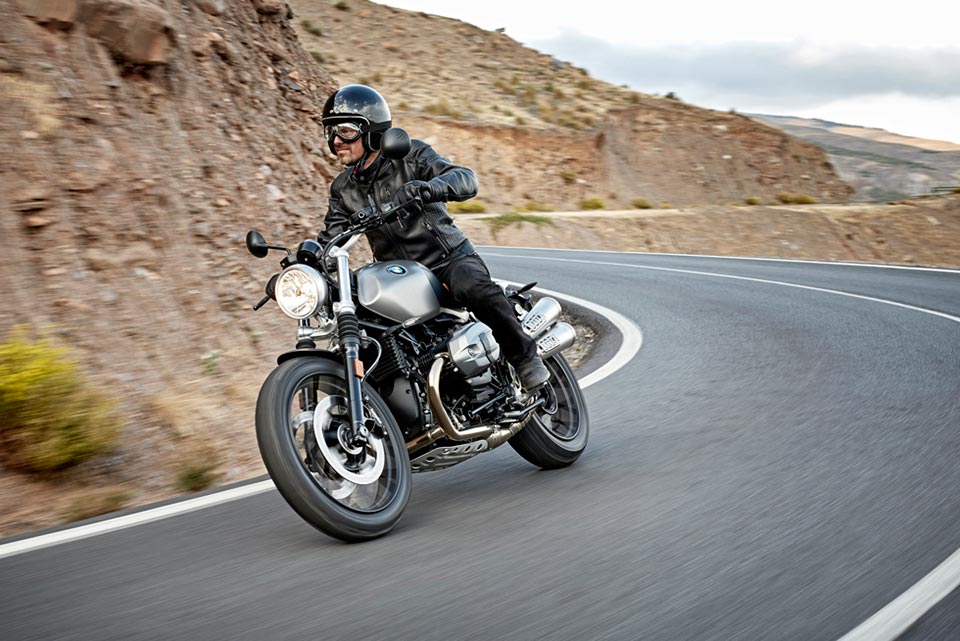 The R nineT Scrambler will be released for the public market this fall, providing a better starting point for riders who want their very own retro dual sports. The Scrambler has a raised exhaust with its two silencers mounted higher than the original R nineT Roadster. The pipes fit close to the bike’s body to create a narrow silhouette, while also meeting new noise emission regulations. BMW claims that the boxer will still sound “sonorous”. Those who want an adventure enduro can wait it out a little longer because BMW Motored has another R nineT in store especially for them.

The Scrambler gets a 19” front wheel. The Roadster’s tire sizes are 120/70-17 in front and 180/55-17 for the rear. The Scrambler’s dual-sport rubbers are 120/70-19 and 170/60-17 respectively. The R nineT Scrambler also trades in the Roadster’s aggressively inverted front forks, for its own new telescopic forks with rubber gaiters. Riding position is made more relaxed and upright thanks to higher handlebars, lower footrests, and less upholstery material on the seat—tapered and stitched in Saddle Brown. 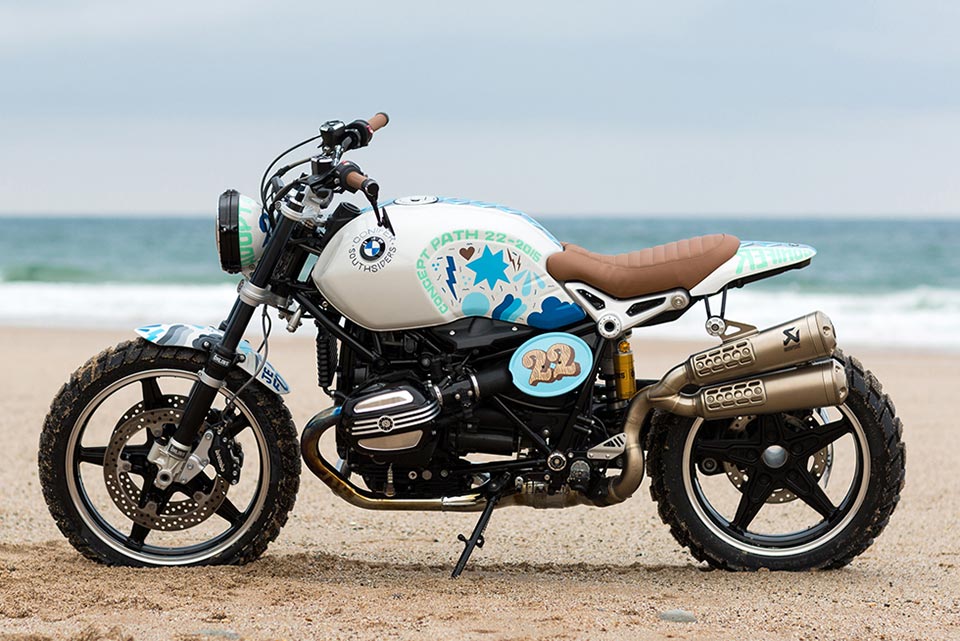 Throw it back to last summer’s Scrambler prototype Concept Path22—a collaboration between BMW Motorrad, Roland Sands, Wheels & Waves club Southsiders MC, and graphic designer Ornamental Conifer. The bike was named after a stretch of remote beach in southern France, only accessible by a path marked number 22, and was rightfully unveiled at the 2015 Wheels & Waves Festival in Biarritz. 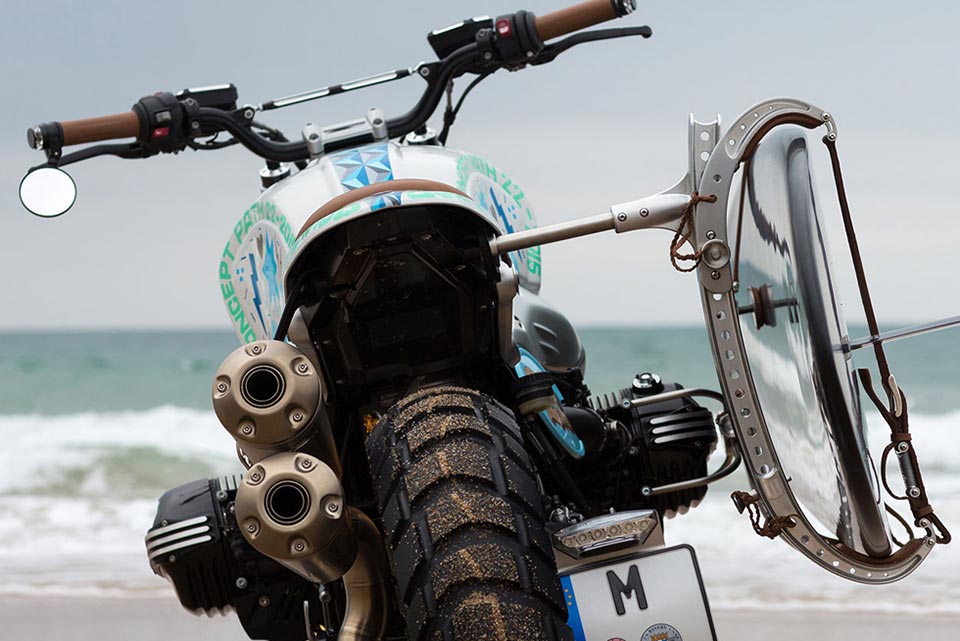 Roland Sands contributed its cylinder head covers, the gold inverted forks were shed for a more traditional route, a 19” front wheel by BMW was added, and even the radial calipers were replaced by older Brembos. BMW also designed the aluminum surfboard mount, adjustable and adaptable to different sizes of boards. The surfboards displayed with the Path22 were created by Mason Dyer

Forward in time to last month’s Concept Lac Rose. This one was, again, revealed at the annual Wheels & Waves Festival. BMW has homed in on Wheels & Waves as a premier event that champions Europe’s custom motorcycle scene, sponsoring the shebang and using it as a launchpad for some of their own spectacular creations. The Concept Lac Rose was no exception. 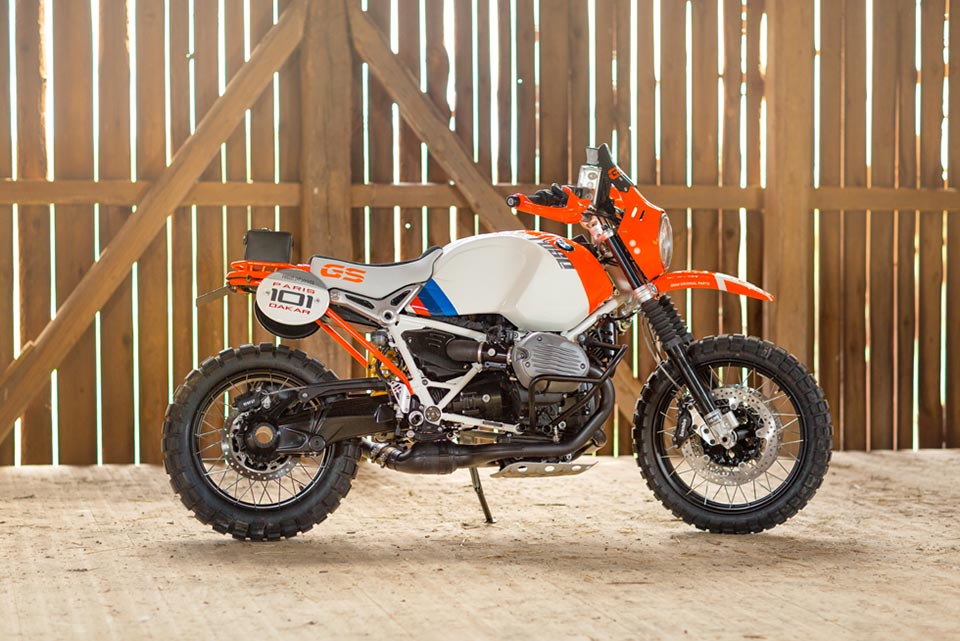 Lac Rose is the French name for the Retba salt lake near the Paris-Dakar Rallye’s former finish line—a fitting name for this off-road motorcycle. Tell-tale features like the high mudguard, large fuel tank, knobbies, and longer suspension travel harken back to BMW’s legendary R80G/S. Even the paint scheme is a tribute to Gaston Rahier’s Marlboro Dakar-spec rally machine. As the Concept Path22 paved the way for the Scrambler’s launch, the Concept Lac Rose signals an upcoming R nineT adventure model. 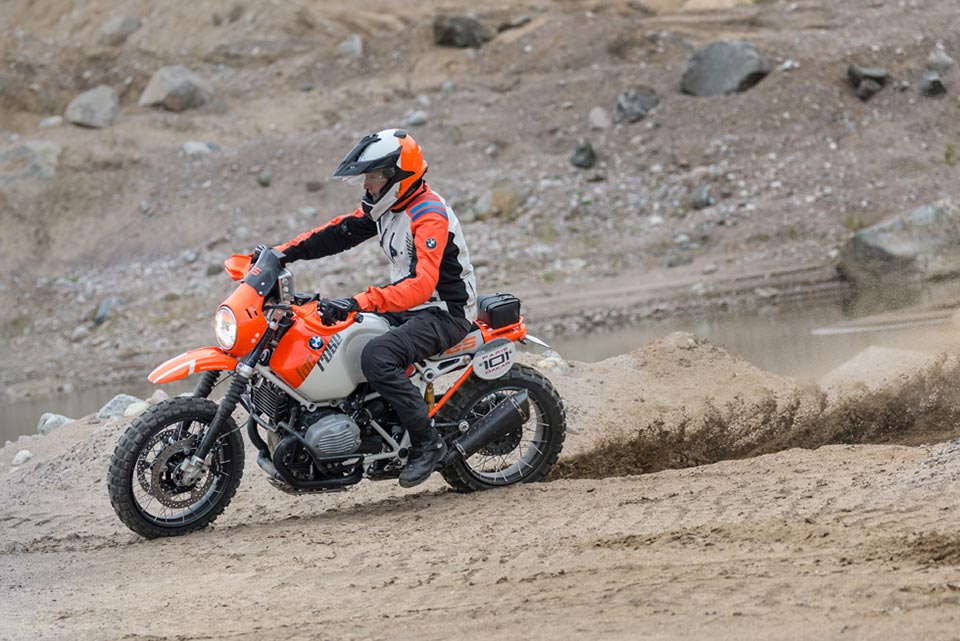 BMW Motorrad’s new Heritage department disclosed that it is working to get three new R nineT versions out; expect to see them at this year’s EICMA in November. One of them is to effectively turn the R nineT into an adventure-designated enduro, possibly packing more technology than the other relatively purist incarnations. The second is to be a simplified base model, aiming to bring the price of the existing R nineT down to meet the budgets of more of the motorcycle market. The third has been revealed to be a sport model—nible, light, and possibly faired in some way. Unofficially speculative renderings are floating around the internet as soon as now, but it’s anyone’s guess at this point. We can look at clues from BMW Motorrad’s past and current platform sharing trends to theorize on the R nineT’s new Heritage line.