Two years ago, at the 2014 EICMA Motorcycle Show, Husqvarna unveiled the “Vitpilen” (White Arrow) and “Svartpilen” (Black Arrow) 401 concept street bikes. The next year, Husqvarna announced plans to produce the 401s and first displayed a new, larger-displacement Vitpilen 701 concept at EICMA 2015. Husqvarna has made good on their promise and revealed the long-awaited production versions of the Vitpilen 401 and Svartpilen 401 for 2017, almost identical to the futuristic designs put forward by the concepts. 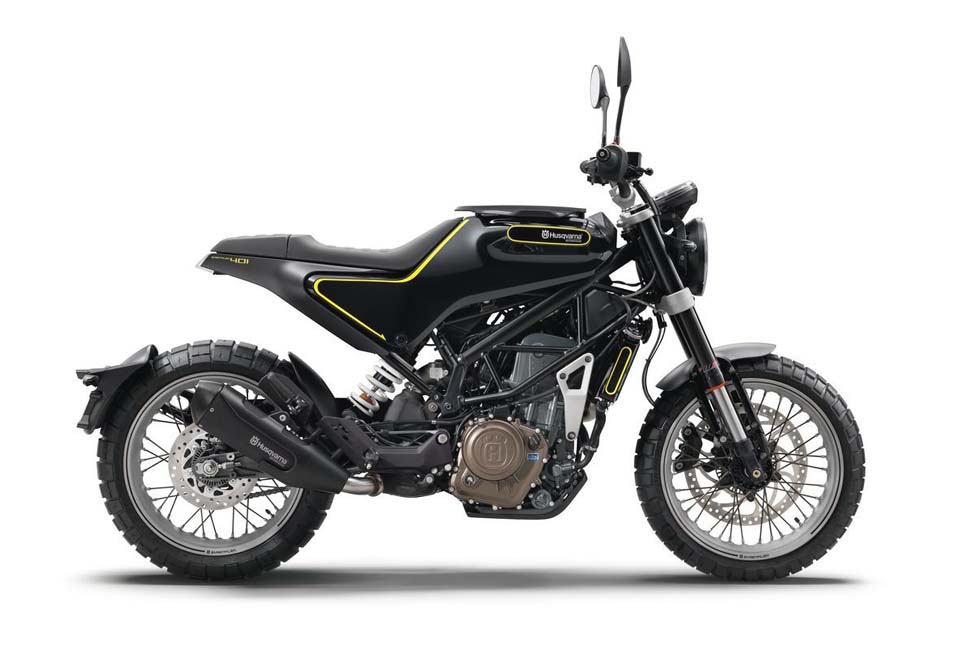 Husqvarna Motorcycles, originally Swedish with its headquarters moving from Italy to Austria in 2013 (when KTM bought Husqvarna from BMW), is a motorcycle manufacturer known for a legacy and lineup of competitive dirt bikes, motocrossers, enduro motorcycles, and supermotos. The brand is looking to expand its position by offering a range of what they call “Real Street” bikes — using urban models like the Vitpilen and Svartpilen to infiltrate new markets where Husqvarna has yet to see representation. This may be done in some locations via KTM distributors. 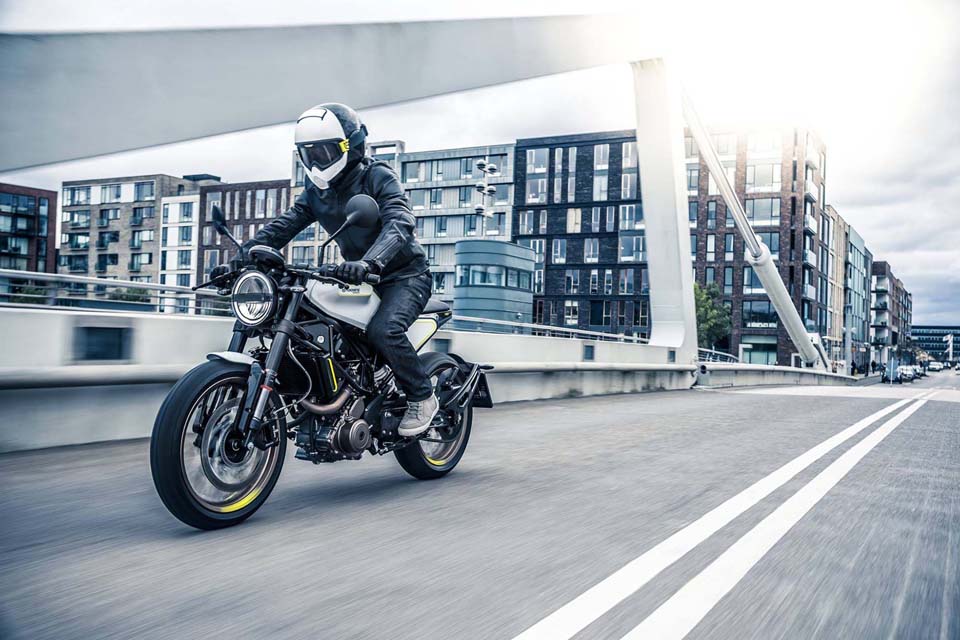 The 2017 Husqvarna Vitpilen and Svartpilen 401 feature forward-thinking body work, showcase LED halo headlights, and are built around the platform of the KTM Duke 390 on chromium-molybdenum-steel trellis frames. They share KTM's 6-speed, liquid-cooled 373.2cc thumper, producing 43.5 PS at 9,000 rpm and 37 Nm of torque at 7,000 rpm. Both bikes make use of ride-by-wire, a slipper clutch, and Bosch 9.1MB two-channel ABS as standard. Suspension by WP is shared: 43mm inverted front forks with 142 mm of travel, and a rear mono shock with 150 mm of travel. Fuel capacity for the Vitpilen and Svartpilen is measured at 9.5L, with a seat height of 835 mm and ground clearance of 170 mm. 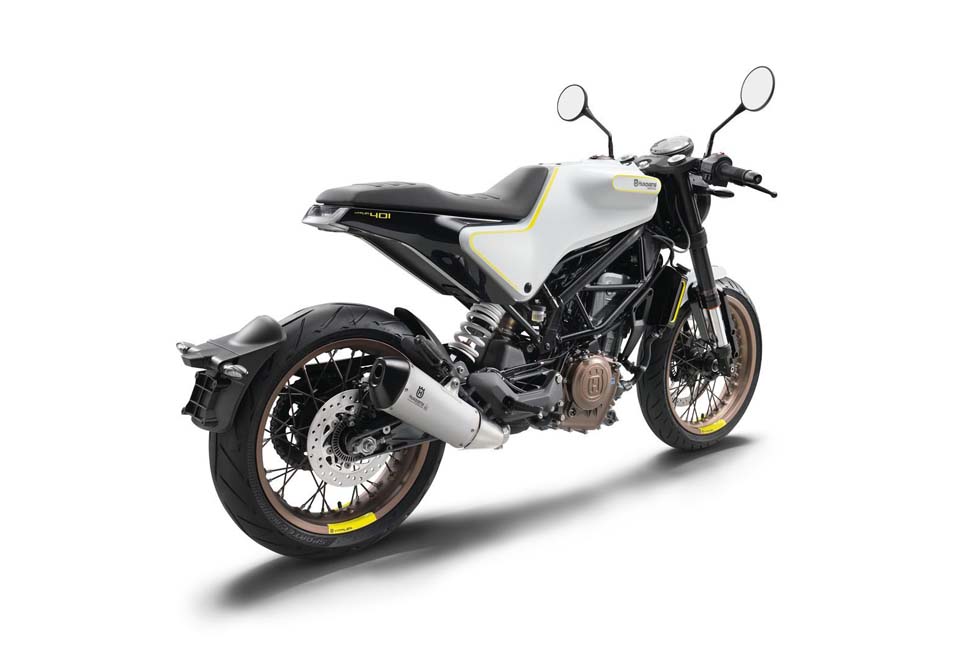 The Vitpilen 401 is a sport naked motorcycle and what some of the public muses as a futuristic cafe racer of sorts. It gets a bigger 320 mm brake disc and ByBre four-piston caliper for stopping the front, with a 230 mm disc and ByBre single-piston floating caliper in the rear. The Vitpilen 401 weighs 148 kg dry, wears sporty Metzler M5 road tires on its wire-spoke wheels, and provides an aggressive riding stance care of low clip-on handlebars. 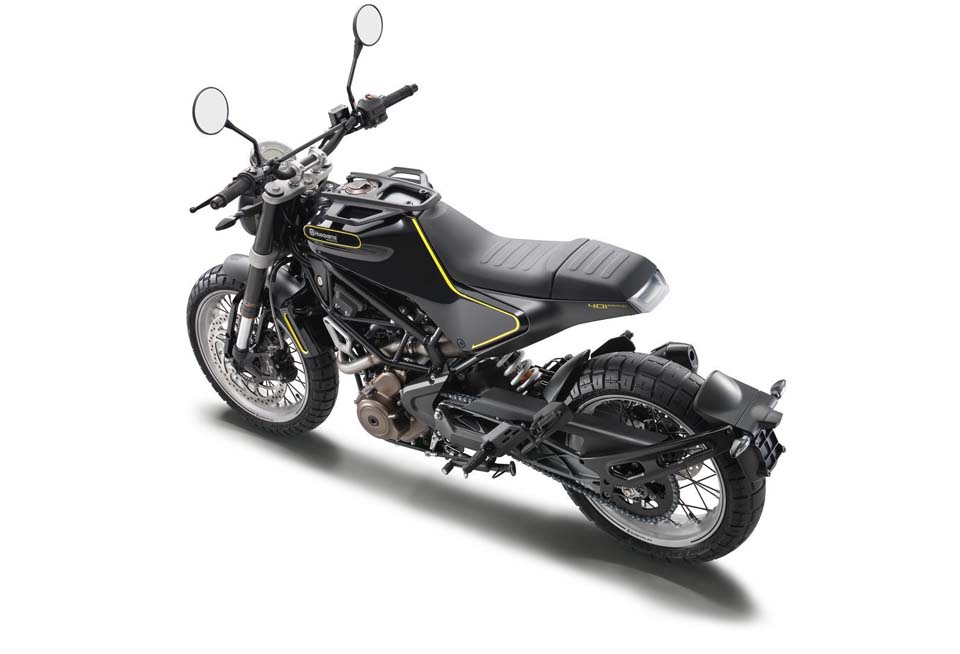 The utilitarian and more rugged Svartpilen 401 is a neo-scrambler with a dark attitude — thanks to higher moto crossbar handlebars forged in aluminum for an upright riding position, and knobby Pirelli Scorpion Rally STR tires. It gets a tank rack for mounting gear, as well as additional protection care of a skid plate and exhaust protector. While the Vitpilen 401 gets a 320 mm disc to stop its front, the Svartpilen receives a smaller 300 mm front disc and keeps the 230 mm rear disc. The Svartpilen 401 weighs a tad heavier at 150 kg dry.

While the powertrains are manufactured in Bajaj’s Chakan plant in India along with the frames and other components, KTM’s Mattighofen factory in Austria handles assembly to give the Husqvarna motorcycles a more premium feel compared to KTM’s lower-displacement models. 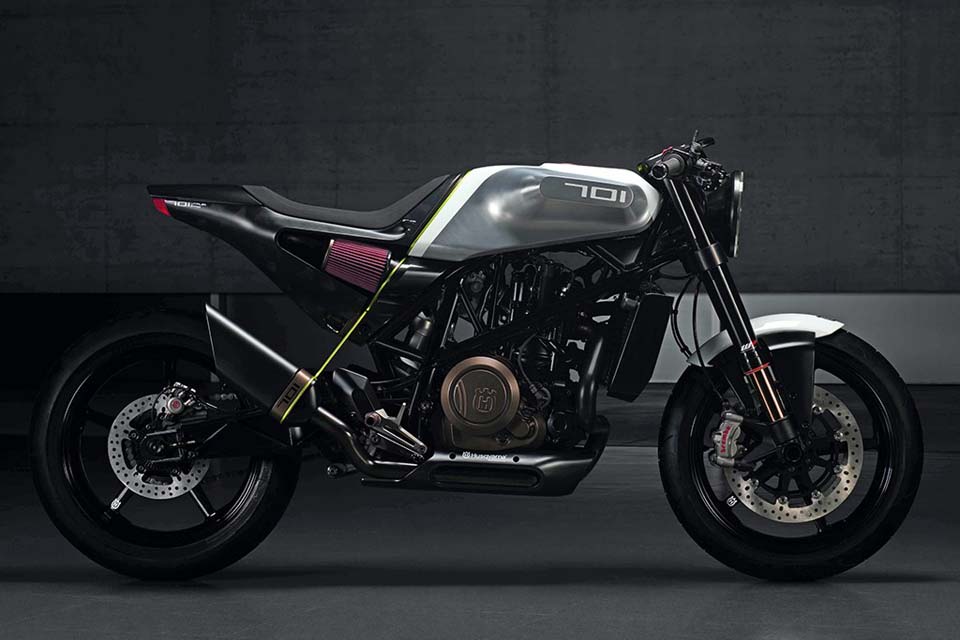 While a production version of the larger Vitpilen 701 concept (utilizing KTM's Duke 690 platform) have been confirmed as Husqvarna’s next step, rumors of a smaller 125cc variant have since been dashed. 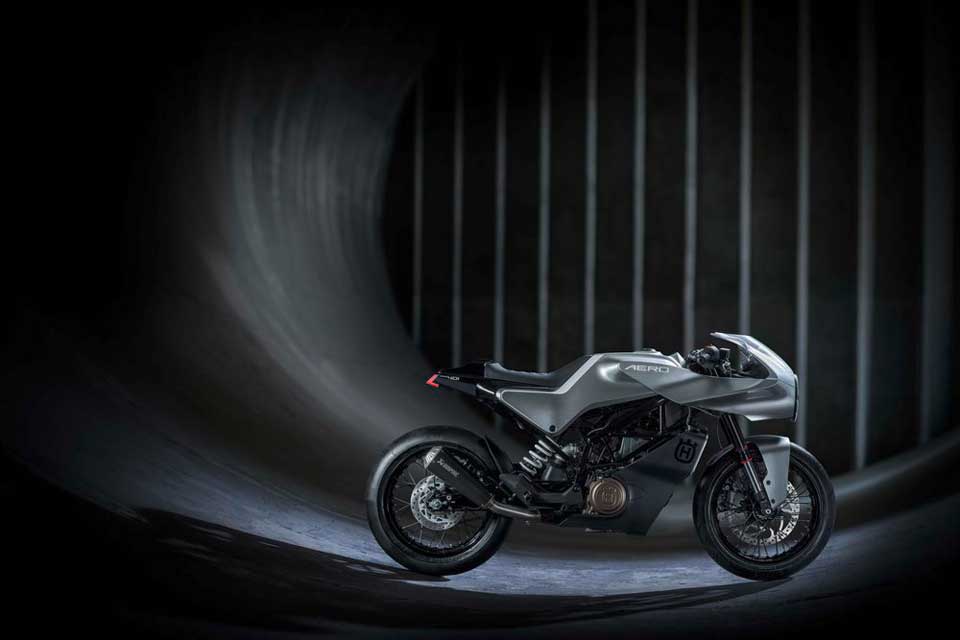 The Vitpilen 401 Aero concept had also been revealed in the past, showcasing more ground-breaking work by KISKA, the Austrian design company credited with envisioning the Vitpilen and Svartpilen concepts. Whether the aerodynamic, angular bodywork and fairing of the Aero will be available for the Vitpilen has yet to be announced.

Ayala-KTM rumored to be exploring distributing Husqvarna in the Philippines; will the Vitpilen and Svartpilen 401 be part of that plan?