Moto Builds Pilipinas 2017 drew a lot of excitement when its new venue was announced. Moving from its previous setups at the Tiendesitas shopping center, the 3rd Moto Builds Pilipinas shared the SMX Convention Center this year with the longest-running automotive-geared Trans Sport Show from April 20-23, 2017. 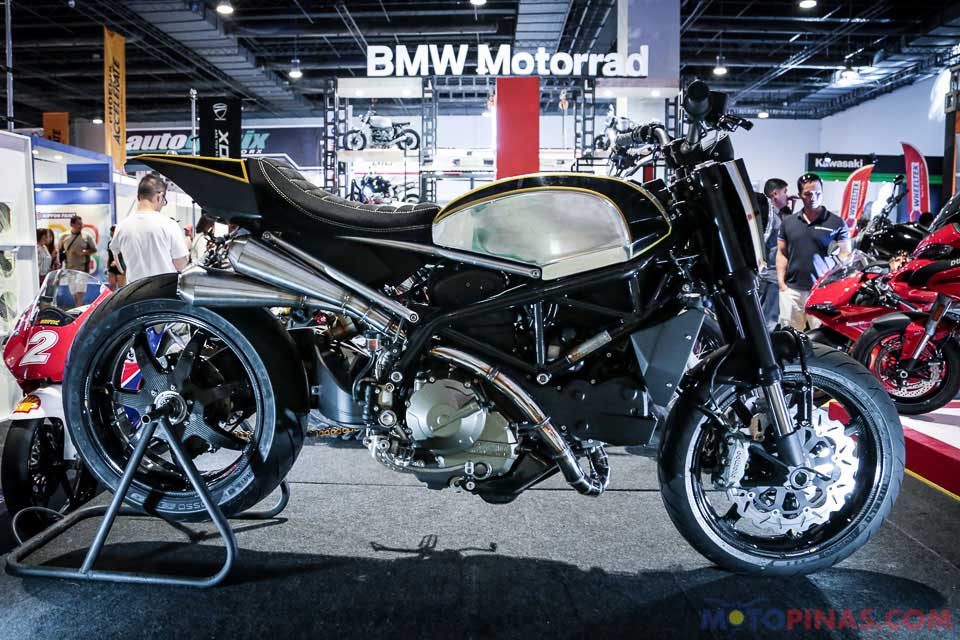 Displayed near the entrance was the high-end Ducati Hyperstrada street tracker-cafe racer hybrid by world-renowned Benjie’s Cafe Racer (BCR) — utilizing advanced and luxurious materials, showing painstaking detail, and donning carbon fiber wheels care of Blackstone TEK. MBP is one of the rare events in which the public is able to view BCR’s artwork in person. 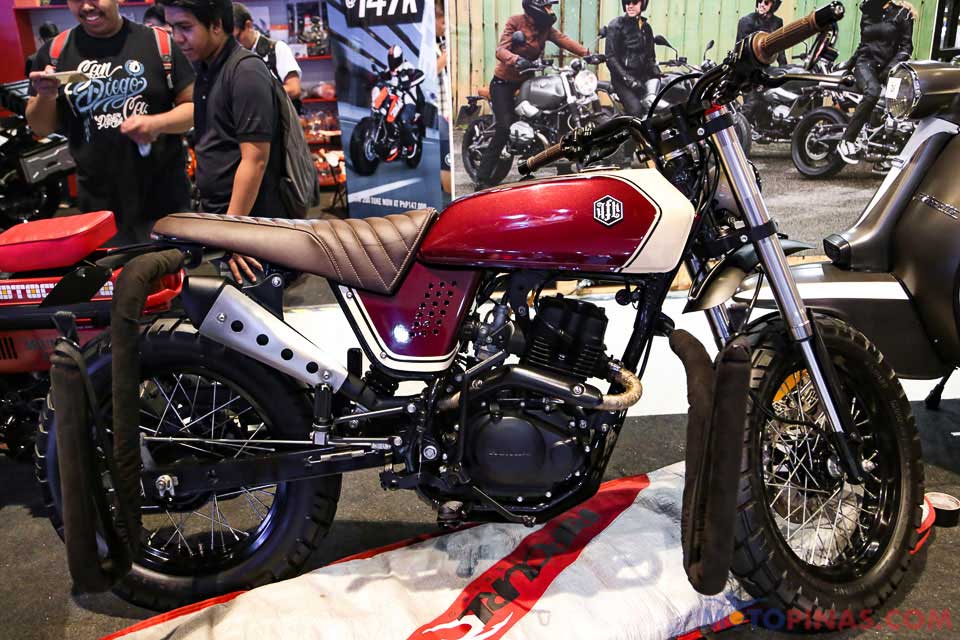 Jerry Formoso Kustoms (JFK) added to the lineup of dirt bike builds with a surf-ready Honda XR125 brat tracker. More and more trackers and scramblers emerged for this year’s show, following the global trend of shops choosing to build practical and versatile dual-sports for agility and adventuring over uncomfortably sportier cafe racers. Due to the country’s rough road quality, increasing traffic, and the urge to explore provincial trails, self-expressive lifestyle riders are realizing the additional value of narrow dual-sport runabouts. 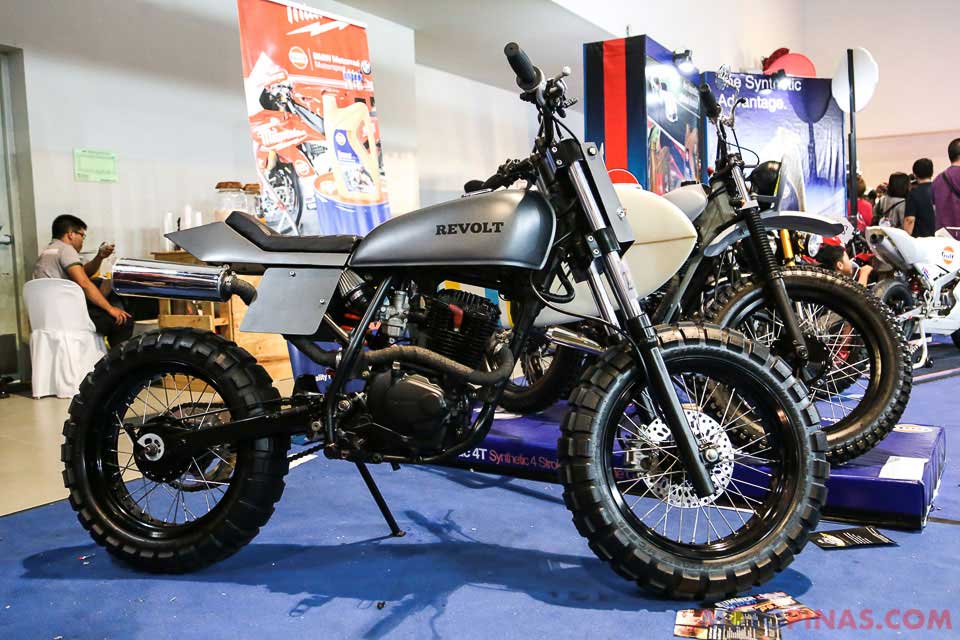 Revolt Cycles exhibited two of their stunning dirt bikes, based off the XLR 200 and XL100S by Honda. The XLR looked right at home in a flat track race — while the XL, shown carrying a surfboard, teetered between brat tracker and scrambler on the spectrum. 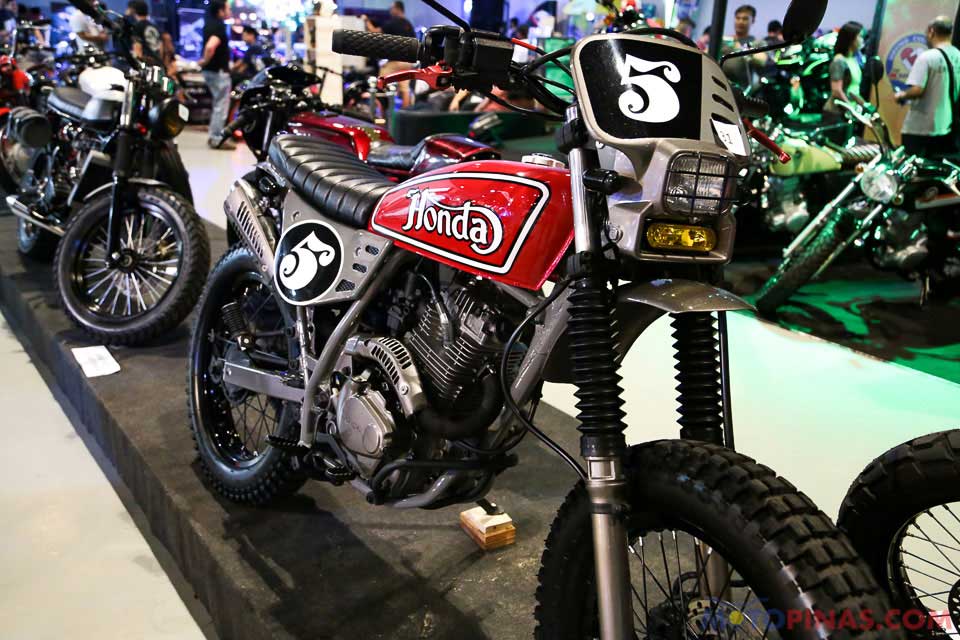 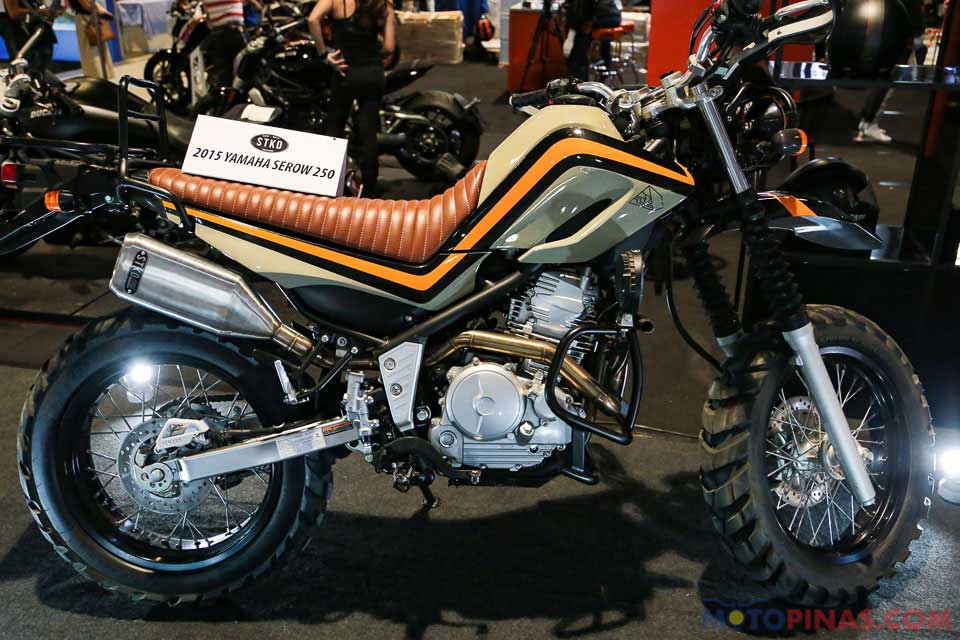 STKD, the surf moto division of water sport outfitters Stoked Inc., came onto the scene as a customization service for Ducati Scrambler riders. They’ve since consolidated and diversified, tackling more makes and models like this Yamaha Serow 250 scrambler. 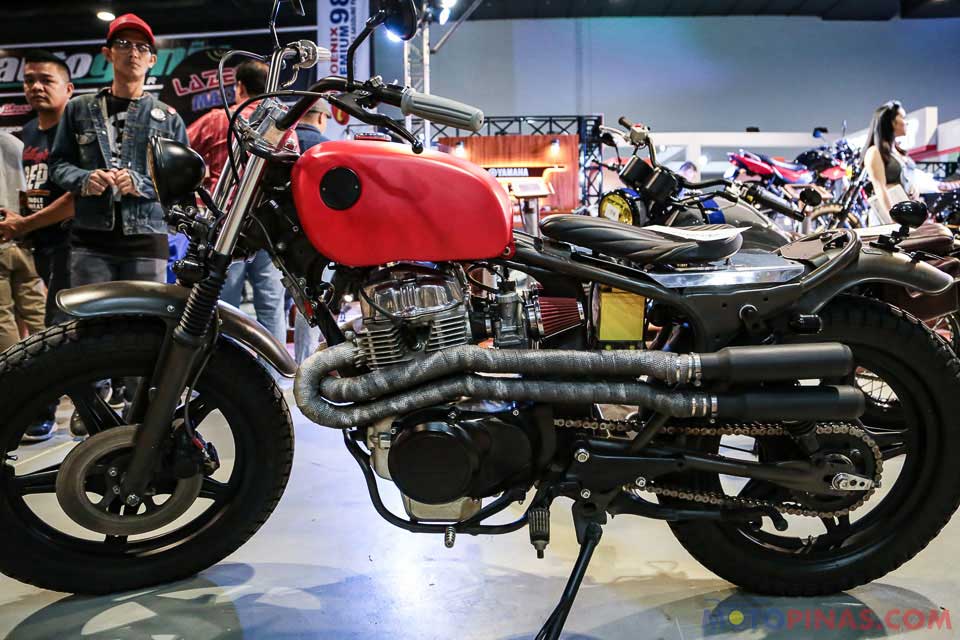 The ‘70s Honda CB400T by Laguna Choppers and LSD Studio was modified to follow along an even more traditional vein. The collaboration turned the standard Universal Japanese Motorcycle (UJM) into a scrambler with lifted exhausts and a smaller short-range fuel tank. Opting for a solo bobber-style saddle instead of a more popular slab seat and slight pullback handlebars gave the CB an even more unique, “Franken” look. 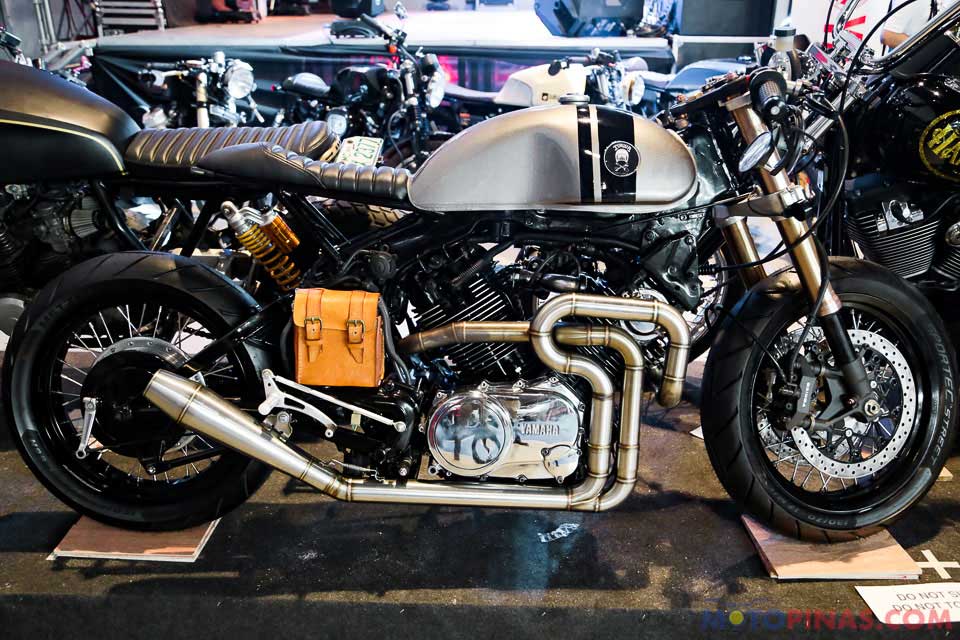 Cafe racers remained retro staples with the likes of Tokwa Party Garage’s crowd-pleasing Yamaha XV750 Virago. The Virago, originally a cruiser, is a favorite base for builders around the world due to the combination of a good-looking middleweight V-twin mounted on a svelte frame with later models getting desirable rear mono shocks. Tokwa fabricated a new rear subframe for a sporty tank-to-tail line, added inverted front forks from a Suzuki GSX-R1000 for modern cornering capability, and hid the battery in a pouch by leather-smith Le Rida. The eye-catching exhaust was outsourced to Reinier, directly lifting a pipe design from the Virago cafe racer by Dutch builder Moto Adonis. 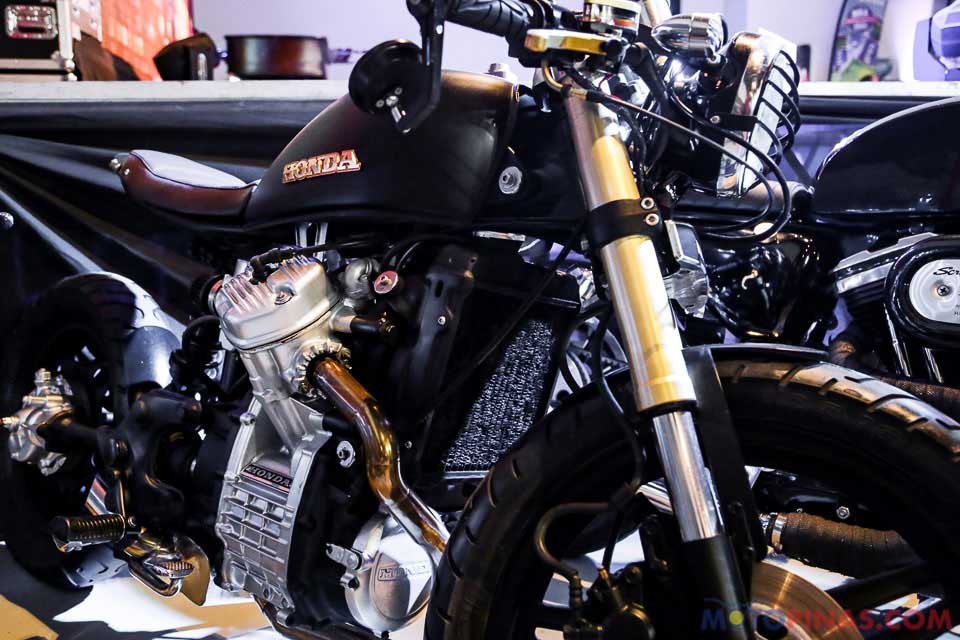 Wilson Tan’s cafe racer was built around the Honda CX500 and its shaft-driven longitudinal crankshaft V-twin (considered “transverse” in popular motorcycle terminology, referring instead to the cylinders). Its inverted front forks were sourced from a Ducati Monster, and the motorcycle was converted to take a mono shock — making its solo seat and short tail float, and giving the cafe racer a remarkably aggressive stance. 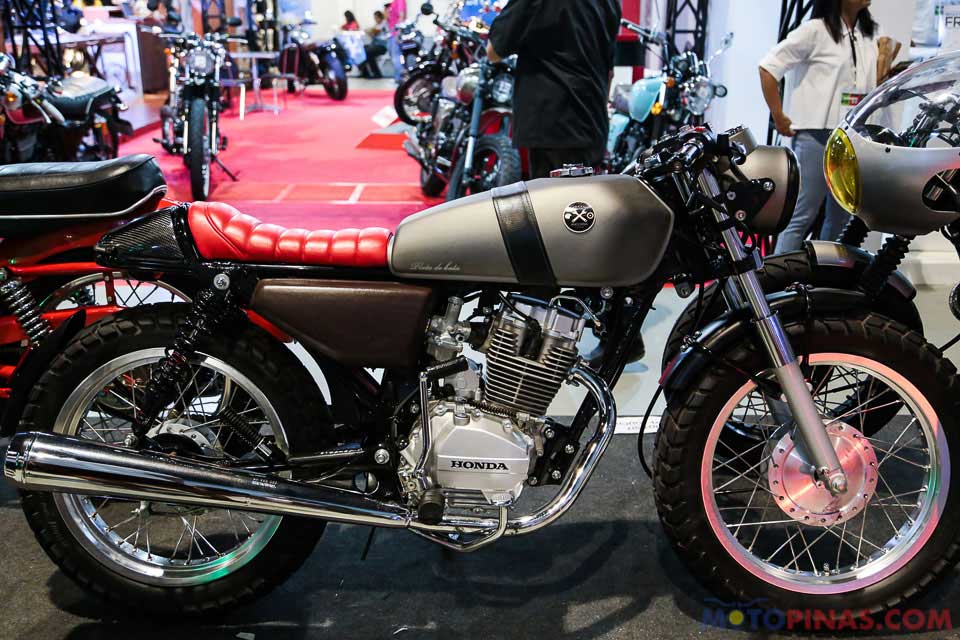 One of the loveliest cafe racers built on a small-displacement commuter was the Honda TMX 125 “Plata de Bala” by Iron Macchina — featuring a bright red seat against a black and gray scheme. Its tail was originally molded out of carbon fiber by Iron Macchina. The shop represented in full force, entering ten bikes into the show including one for the Biker Buildoff main event. 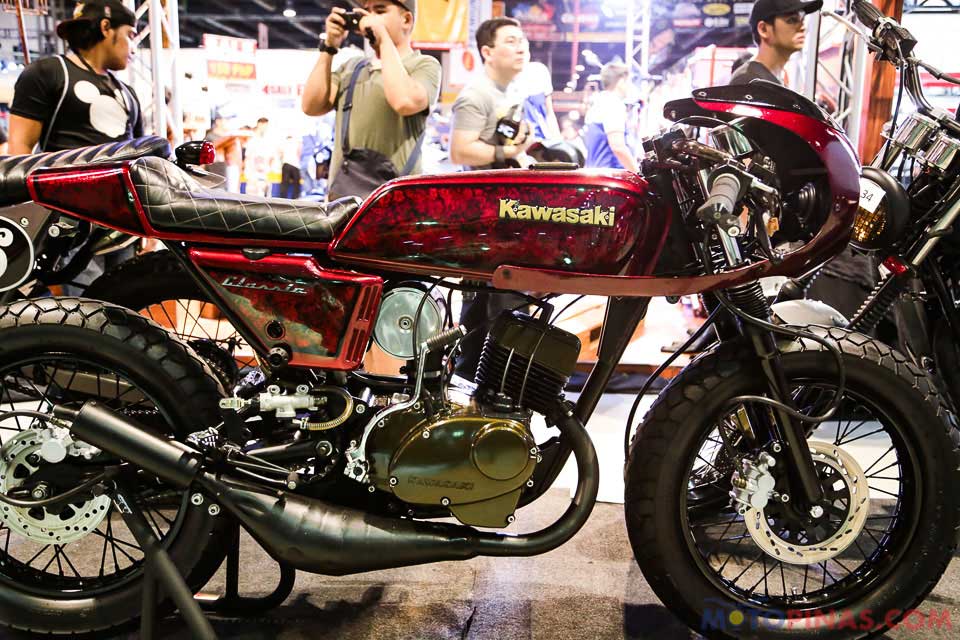 The Kawasaki HD3 125 cafe racer by Aktum Yatco was one of the few two-stroke builds at the show. It wore a classic GP-style half fairing around its headlamp, a diamond quilted seat, and a unique black and red paint job. 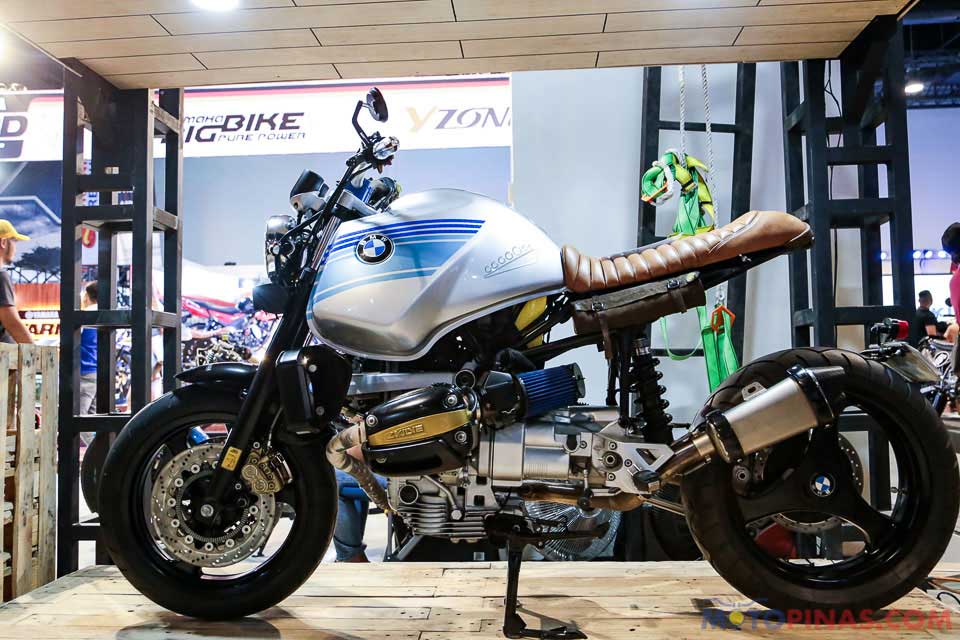 At the BMW Motorrad booth, Pong Incomio through Bai Customs morphed an R 1100 R naked roadster into a retro-modern street fighter with an aggressively mounted leather seat and an enduro-style tank from an R 1150 GS. 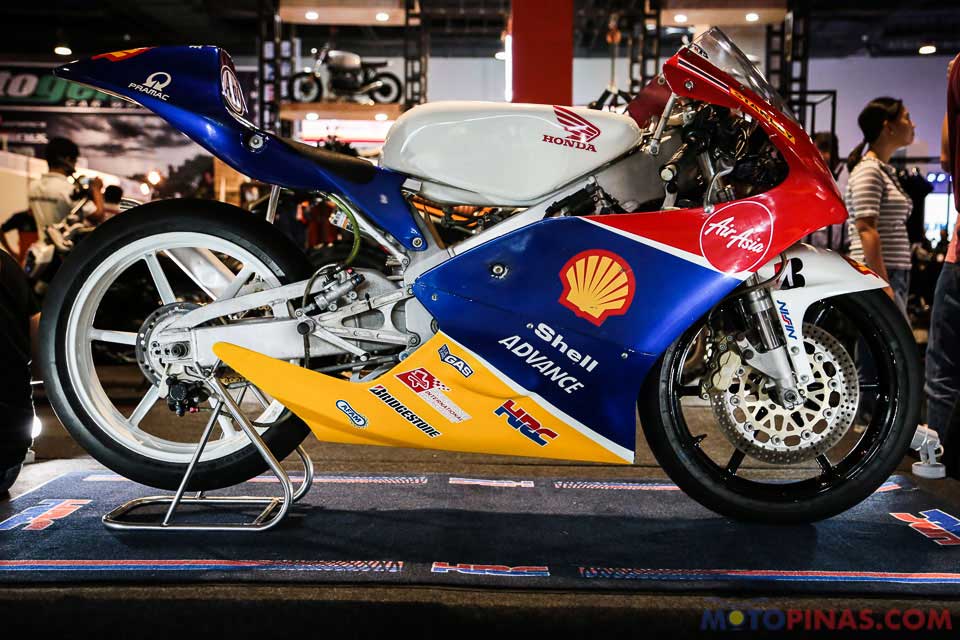 In contrast to the production motorcycles at branded booths and the hodgepodge of custom machinery at Motobuilds Pilipinas, this RS125R was a special sight to behold. Brought into the country from Malaysia, the RS125R is a two-stroke race-only bike built by Honda Racing Corporation (HRC) to compete in the Grand Prix World Championship’s 125cc class. It was displayed in Shell Advance Asia Talent Cup (SAATC) livery. HRC would later replace it with the current four-stroke NSF250R Moto3 bike.

Moto Builds Pilipinas has seen exponential growth along with local interest in custom culture over the three years since its inception. More Filipino builders have been learning fast, and quickly gaining exposure thanks to the exchange of information and ideas over the web and social media… However, a couple of custom bikes were still seen elaborately copying distinctive designs sourced from online. In the future, we hope to see locals push things further with their own wild and original ideas as well as continue to receive client funding and manufacturers' interest. The market is ripe. It’s only a matter of time until the Philippine scene starts to tackle more materials like fiberglass, aluminum, and perhaps carbon fiber and titanium… Maybe even strike closer ties to performance tuning, clever engineering, and advanced construction methods.

This year’s event solidifies Moto Builds Pilipinas as the country’s most prominent custom bike show, inferring that the Philippines proudly has the creativity, resourcefulness, capability, and know-how… To create machines that can and already do inspire petrolheads around the world.

Lane-splitting is actually illegal in the Philippines

Motorcycle riders in the Philippines break more laws than we realize. Many of them are laws as far back as 1987. We check out motorcycle models at this year's Bangkok Motor Show that could come to our shores soon.