A taste of Taiwan's electric future Just recently, Taiwanese motorcycle manufacturer, Kymco, announced the launch of its two new electric scooter models for the global market. The Kymco Many 110 EV and Nice 110 EV are the first two of a planned broad offering of electric scooters under the new Ionex line. Kymco has 8 more in the pipeline planned for the next three years with the goal of making electric motoring an accessible reality.

There could be no better starting point than Taiwan. The country has the world’s highest scooter density. Kymco is also the number one motorcycle manufacturer here, making it uniquely positioned to lead the electric charge. 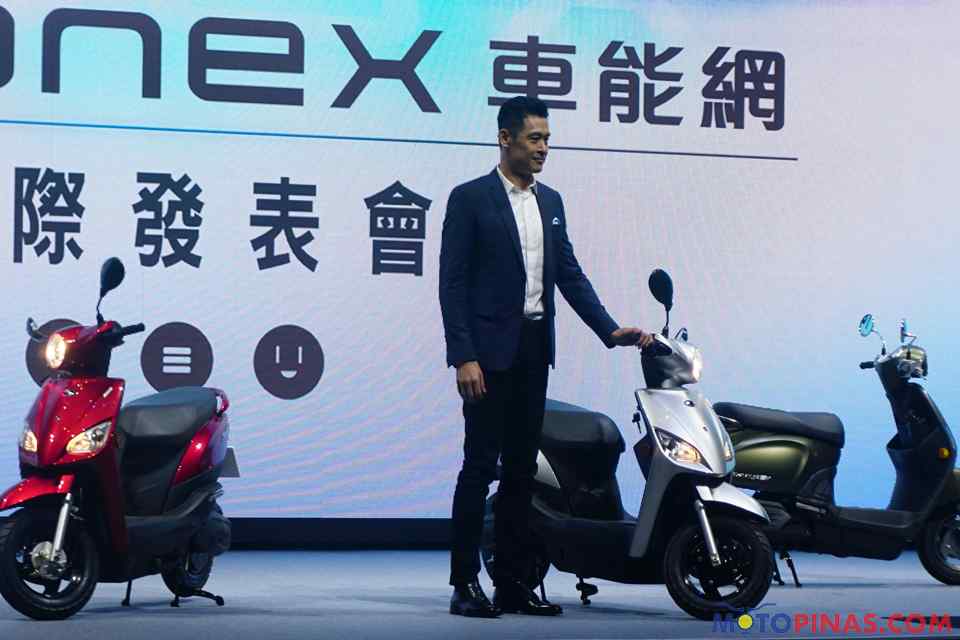 Kymco’s electric scooters are all part of their Ionex system. The Ionex system is composed of standardized batteries, home chargers, and a charge point network and energy stations. The standardized size and form means each battery can fit and power all scooter models. Each scooter can fit two batteries, easily stowed into a compartment that twists up from the floorboard. Besides the swappable batteries, each Kymco Ionex scooter also has its own core internal battery, allowing the user to continue to travel while the removable batteries are charged. Each scooter can fit two removable batteries and carry two more in its underseat storage, effectively extending its range up to 200-km. 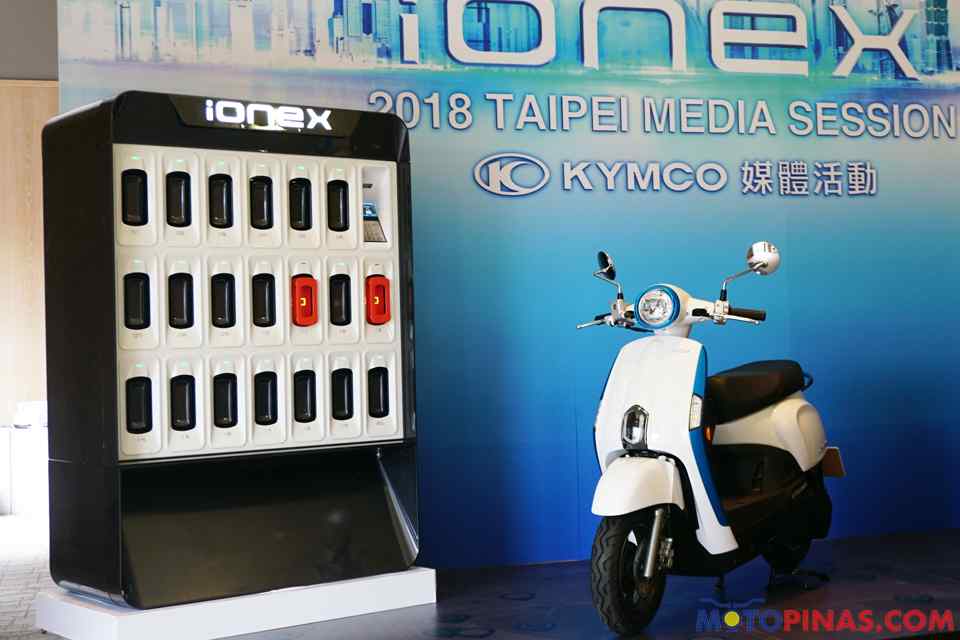 As for the charge point network, scooter buyers are offered membership into this network for an annual fee of just US$10. This comes with an annual mileage cap of 1000-km. With this membership, they’re granted access to the charge point network and energy stations. To extend an e-scooter’s range, simply add more batteries which can be rented from energy stations throughout the country. All the chargers and charging stations are also built to one specific design, allowing all Kymco scooters to charge up where available. Kymco hopes to complete the deployment of 1,500 Ionex fast charging stations on day one of shipping its first Ionex e-scooters. By the end of 2019, it will complete the deployment of 2,000 Ionex energy stations, so riders can easily rent swappable shared batteries for long-distance travel. Furthermore, it plans to have more than 30,000 shared outlet spots to completely eliminate any range anxiety riders may have. 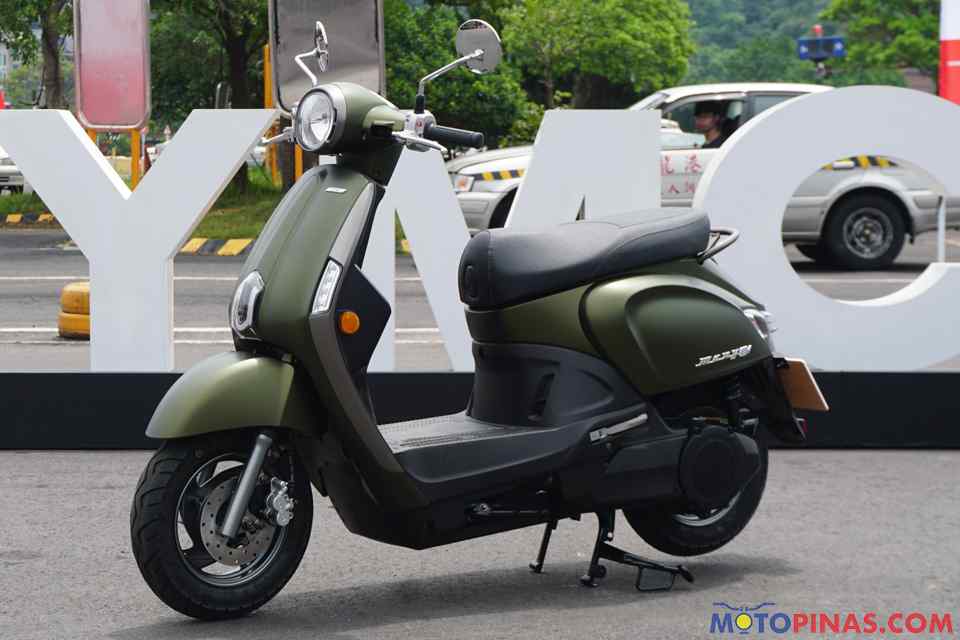 Each scooter is still offered with its own charger. Each one also comes with a personal rental removable battery that weighs just 5-kg, allowing the rider to easily carry it home to charge at night. These combine to provide a range of 60-km; more than enough for a couple of days’ use. Charging takes just 4 hours, or as fast as 1 hour with the fast chargers fitted in the charging network. The scooters are covered by a 5-year core battery warranty, 10-year power motor warranty, and lifetime warranty for the rental batteries.

The e-scooter is powered by Biactron efficiency technology, making it more efficient with energy, and take up less space and weigh far less than its competitors.

The final cherry on top is the optional Noodoe Navigation system. The Noodoe system is displayed on a circular color LCD screen that can display the weather, navigation and clock. It can also connect to a cellular phone or helmet communication system to broadcast audio from the navigation and provide turn by turn directions. 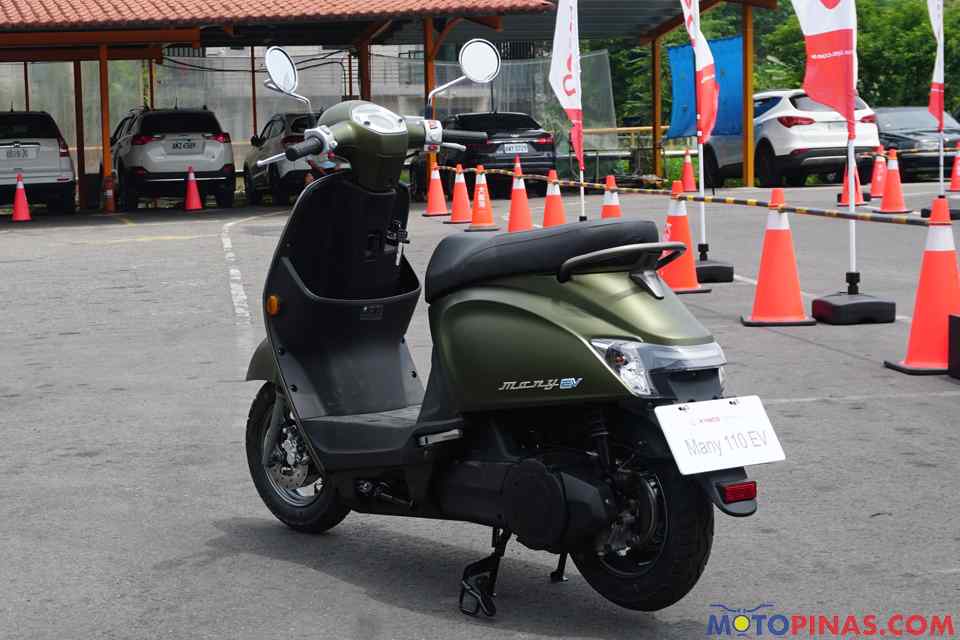 Besides the launch of the motorcycle itself, Kymco invited us over to experience the New Many 110 EV in person, serving as a good indicator that the company is planning to offer it in the Philippines. 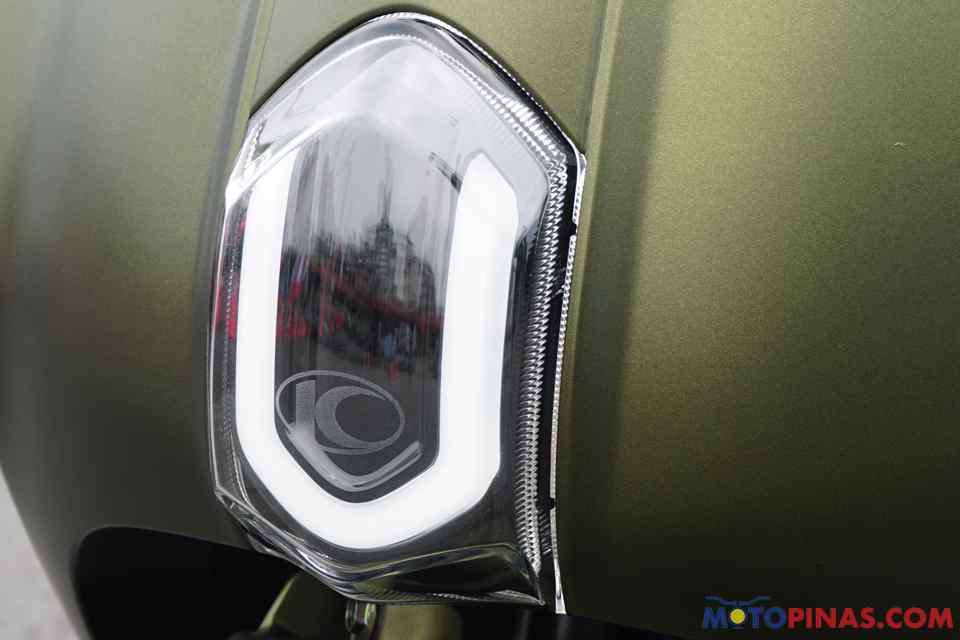 The Many EV features European scooter styling, looking very much like your typical Vespa, Lambretta or even Kymco’s own Like. What distinguishes it as an electric scooter is an LED hexagonal just above the front fender. It rides on 10 inch wheels on 90 mm tires. Upside down forks keep the front aloft while a single swingarm takes care of the rear. It almost looks like a regular scooter with an internal combustion engine as the rear right has some sort of extension that almost looks like a muffler. 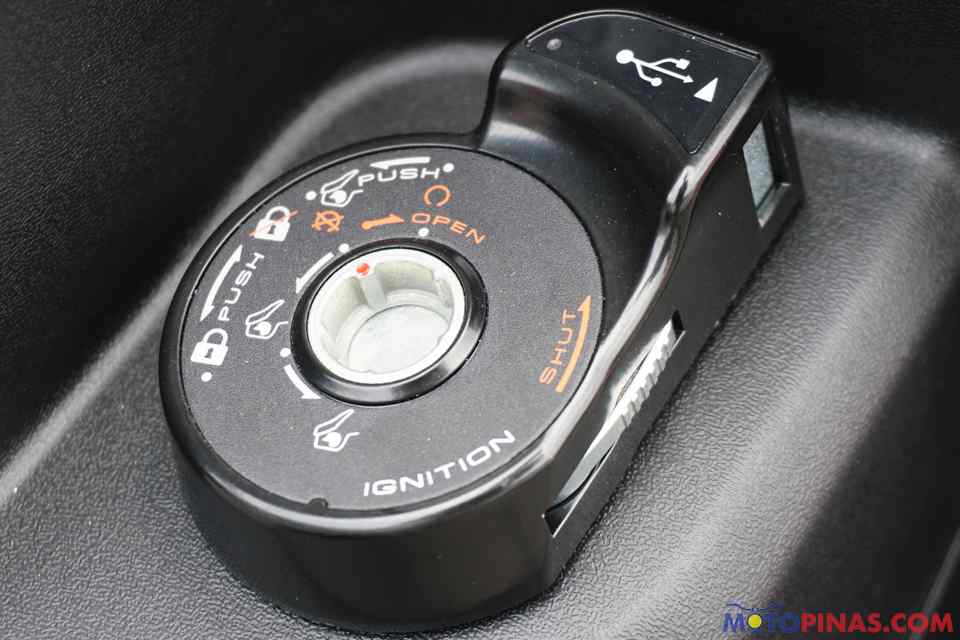 The key slot is like any standard scooter with front steering lock and keyhole cover, with the addition of a USB slot for charging your phone. There’s an accessory and ignition position too. 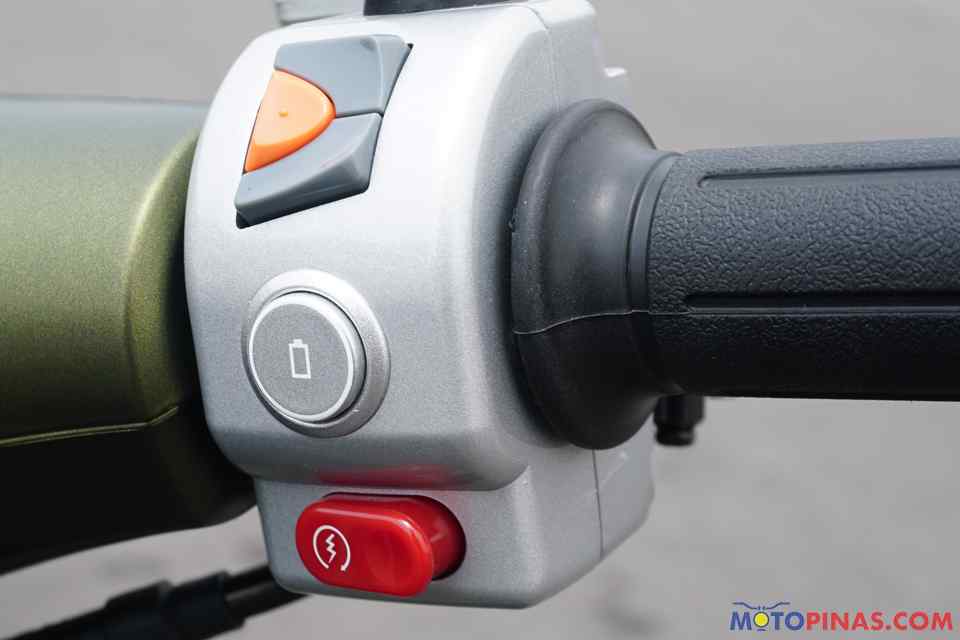 The start button turns on the bike, but there is no vibration to indicate its on. Instead, the LED quietly lights up and it’s ready to go. Just above the start button is the battery button. 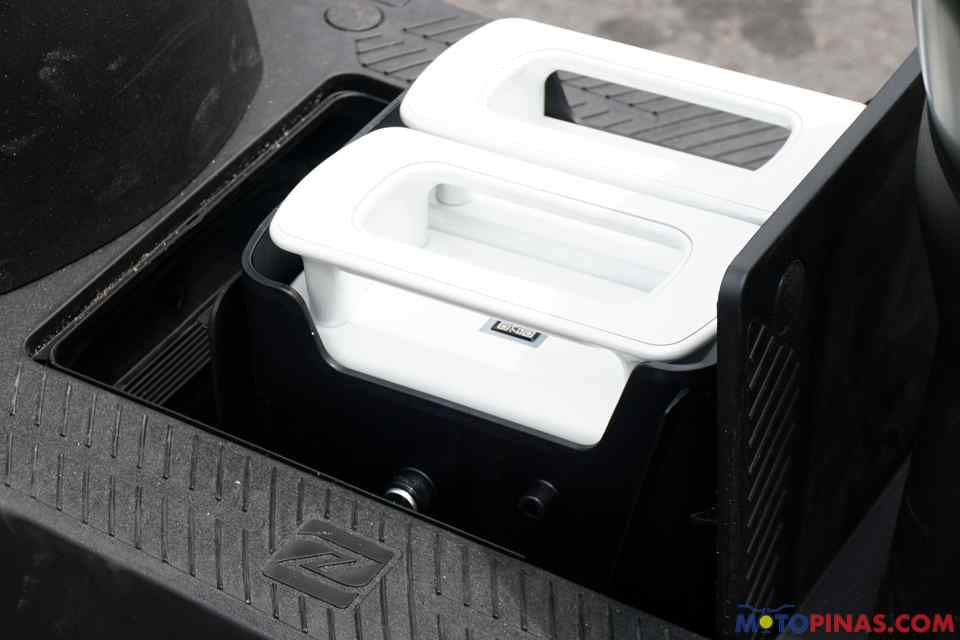 Provided the bike is on its center stand, pressing this opens up the battery compartment, which twists upward from the flat floor. The compartment can also be opened via NFC, by simply positioning the battery above the sensor on the floor board. 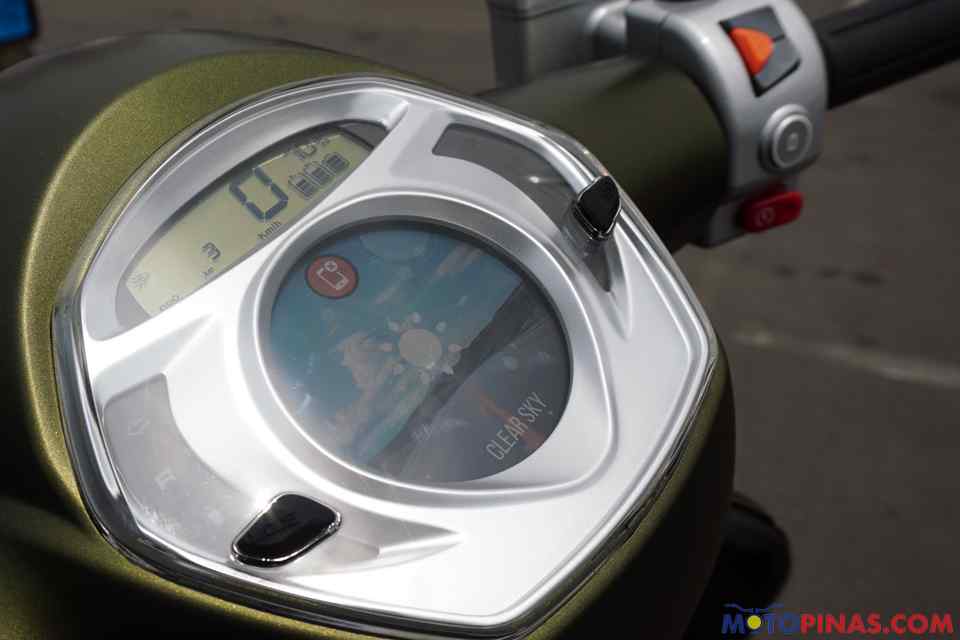 All the models present had the optional Noodoe Navigation system, which took up the majority of the instrument cluster space. It could display the route, the weather, a digital speedometer, or clock, as well as phone details when connected with one. The navigation, however, is mobile data dependent. These options are toggled via buttons on the right handlebar. 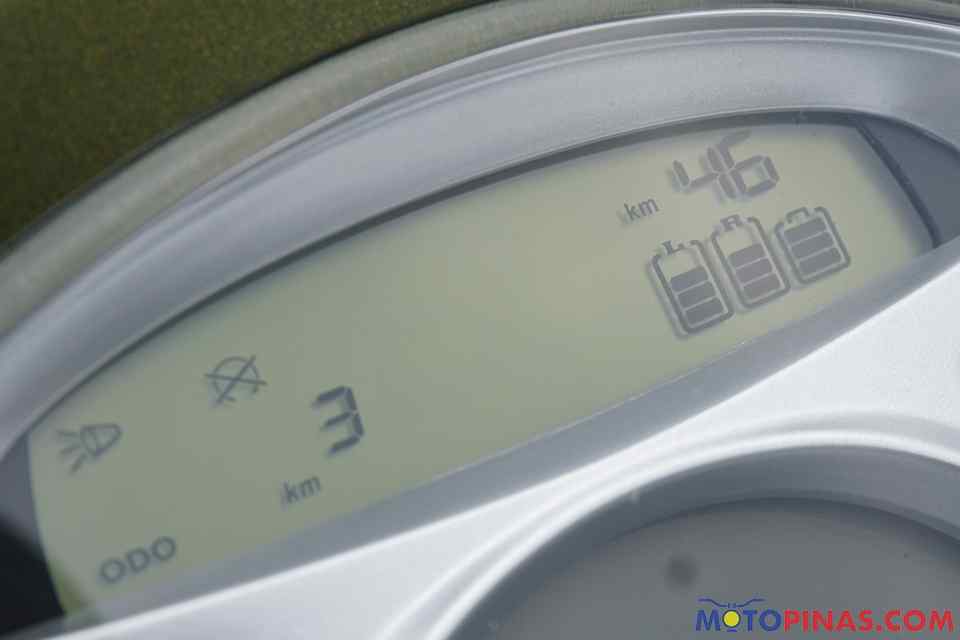 Just above it is a simple LCD screen that has the odometer and indicates how many batteries are connected, the power left in percentage, or their estimated range in kilometers. This is also were the warning lights are displayed. 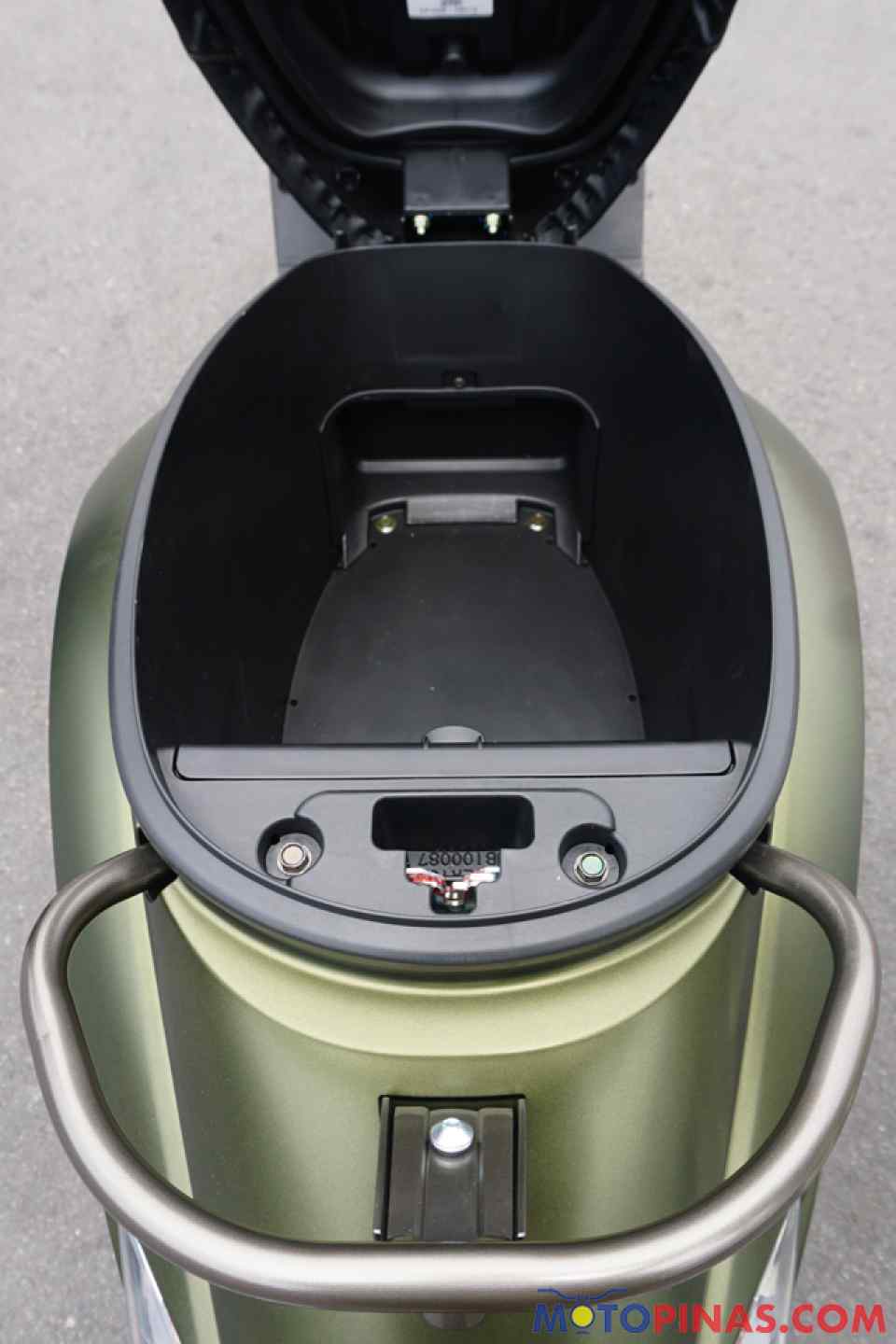 Under the seat is a particularly massive storage space, thanks to the compact electric motor. It’s designed to fit two Ionex batteries, but can easily fit a full face helmet or a full grocery bag. 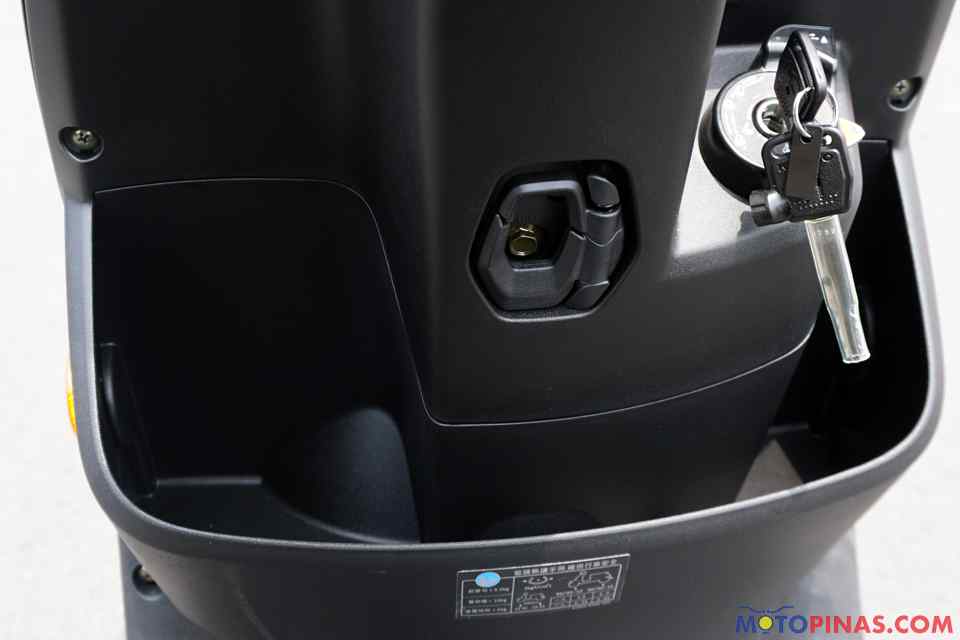 The rest of the bike is pretty standard fare with hooks, a storage pocket in front, side stand, and foot rests for the pillion passenger. 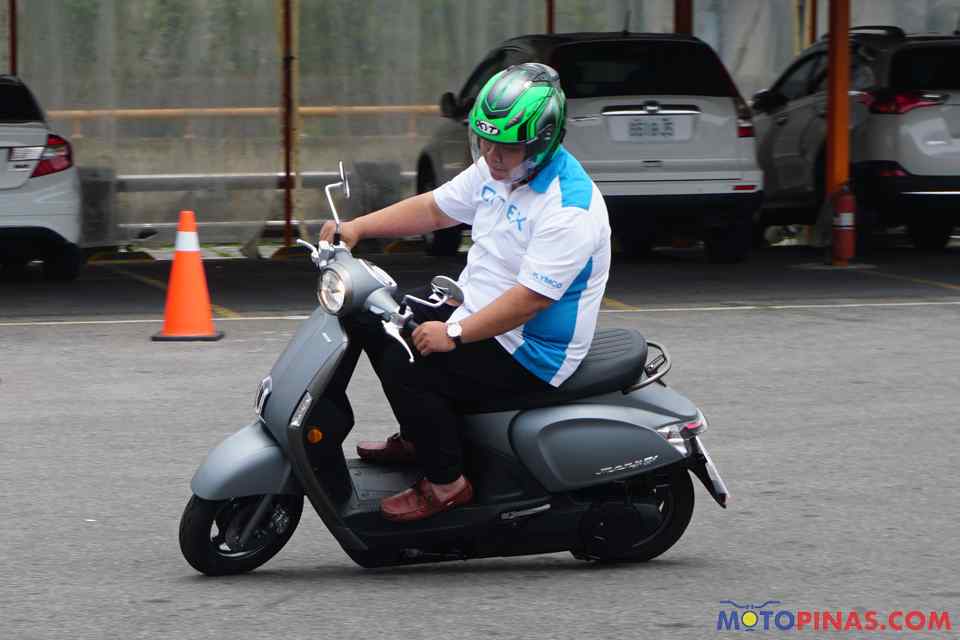 With a helmet fitted, we were given the go ahead to take a brief ride. Perhaps the only confusing part is figuring out if the bike is already on as there really is no sound to indicate so. There’s no torque from the motor at idle either so it doesn’t creep forward like a regular scooter.

The bike itself feels relatively light. It’s far lighter than a conventional scooter, making it easy for female riders or those of short stature to keep it upright. A gentle twist gets it going. And while the common perception is that electric motors give you all the torque instantly, the Many EV delivers it progressively, making it easy to handle while accelerating. The bike also comes with an Eco and Power mode, delivering variable power with just a push of a button. This changes the throttle response instantly from sluggish to something a little more exciting. 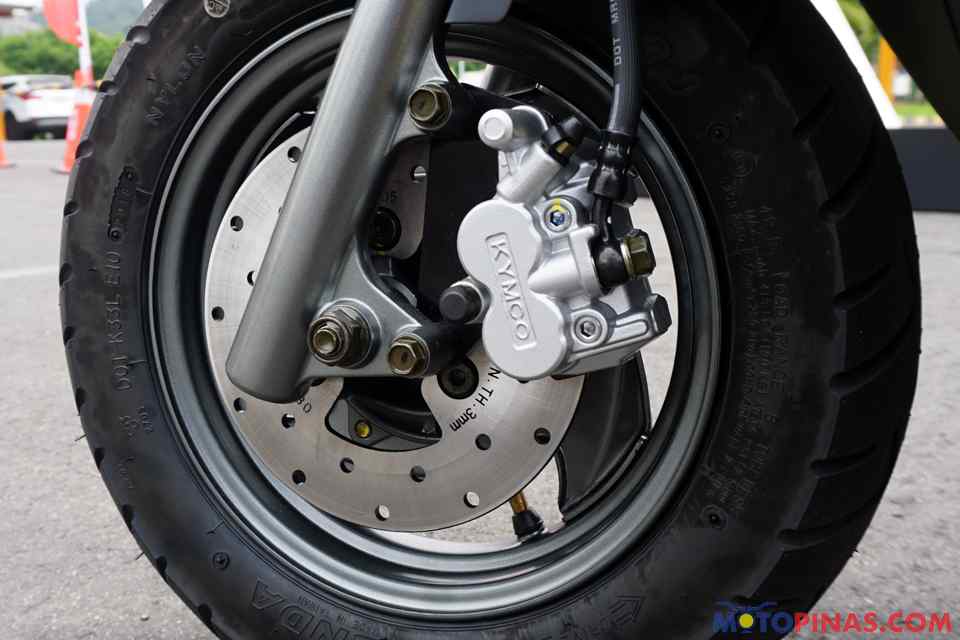 Even with Power mode, it doesn’t accelerate quickly, and that may be a good thing. It feels like a regular 100cc scooter and will go on to a top speed of just 60 km/h. That’s easy for the front disc and rear drum to handle with little drama, even without ABS. 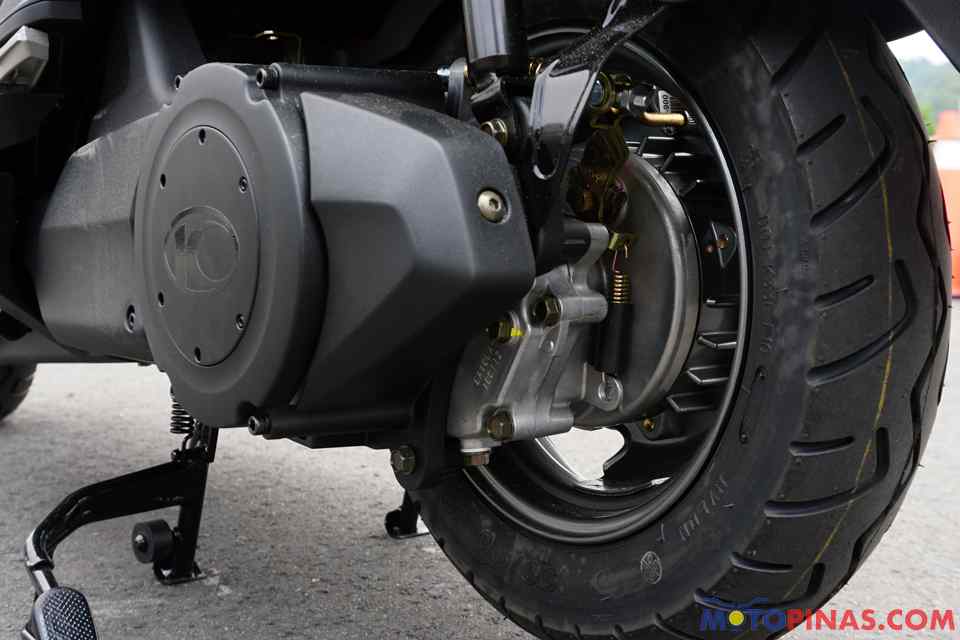 Finally, it’s very easy to handle, thanks to the short wheel base and low center of gravity. Changing directions is quite easy whether through steering or counter steering. The only caveat is that the bike is very rear heavy, making it easy for the front wheel to lift ever so slightly off the ground when accelerating or sudden changes of direction.

Finally, after a few laps around the test track, it was time to head back to the pits. This is where we got to hear the signal light indicator which had a rather unusual tone. Perhaps the Many’s final trick is its reverse gear. A button on the front of the left handlebar engages it. You have to throttle to get it rolling, but it’s certainly handy if you have a pillion and a tight parking space. 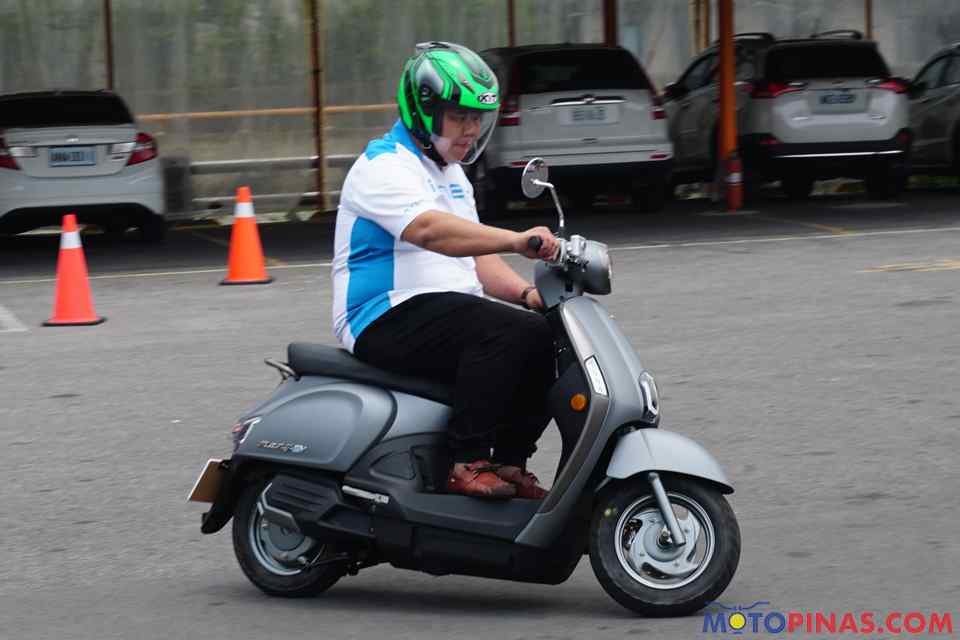 The Many EV certainly makes shifting to electric power quite tempting, particularly because it feels just like a regular scooter, minus the noise. The scooter has great build quality and is certainly more delightful to ride when fitted with Noodoe Navigation. It’s a far cry from the affordable e-scooters offered in practically every corner here with range, style and finesse that is leagues ahead. Unfortunately, so too is the price, but if Kymco offers a similar long warranty here, then it will be worth it.

Kymco executives say the charging infrastructure in the Philippines to support Ionex scooters is still years away, but they’re confident the e-scooters could sell because of the already good range and quality of the bike itself.

Just like Kymco’s latest campaign, the Ionex scooters could be the first electric bikes to “Win my heart.” We catch up with Aris Cuevas, the first Filipino to compete in the BMW GS Trophy, and find out what the unique competition was like.

We give you the highlights of the Big Bike Expo with new brands like CFMoto and Motomorini making their show debut.