It’s been almost a decade since the Triumph Street Triple was introduced to the world, back in 2007 as somewhat of a smaller version of the Speed Triple 1050. The sporty, naked roadster with street fighter genes had been based on the iconic inline-three engine off the Daytona 675 sport bike ever since… For 2017, Triumph upgraded the Street Triple line to take a new 765cc motor, promising explosive and increasingly agile rides with the new stuff. The new Street Triples are also lighter than last generation’s by 2 kg, in spite of the bigger displacement. 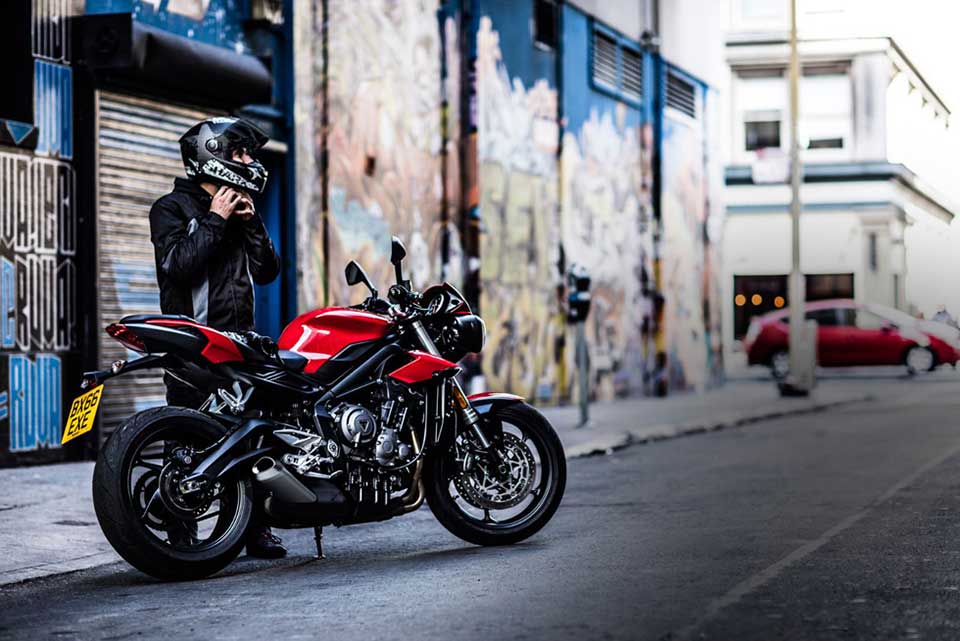 All bikes get blacked out motors and black paint schemes with different color choices varying between models. An improved gearbox with updated acceleration geometry should shorten 1st and 2nd gear ratios. They all come with ABS, switchable traction control, riding modes integrated in a new on-board computer, and three selectable screen display styles for readability in different light conditions — otherwise you can turn the ambient light sensor on ‘Auto’. The revised LCD instrument panel allows on-the-fly mode selection and features a fuel gauge, odometer, and trip meter for all three trims. 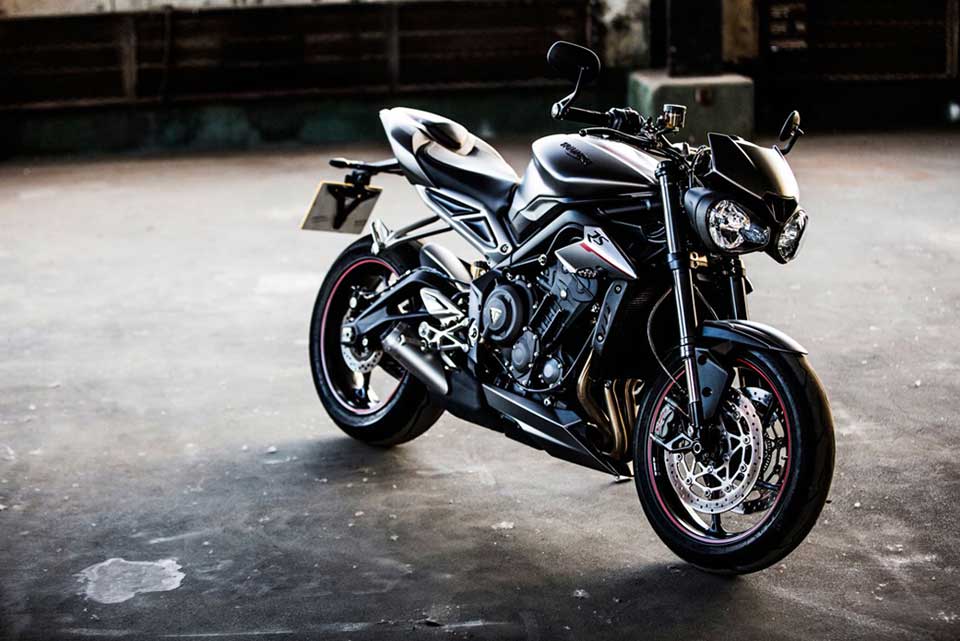 The basic Street Triple S comes with 2 riding modes: Road and Rain. Suspension on the S is taken care of by 41mm Showa inverted front forks with 110 mm of travel, and an adjustable Showa piggyback reservoir monoshock with 124 mm of travel in the rear. Braking power is delivered by twin 310 mm discs and Nissin 2-piston calipers up front and a single 220 mm disc with a single-piston Brembo sliding caliper out back.

The main frame, subframe, and swingarm on the S are powder coated in black with the color scheme choices of ‘Diablo Red’ and ‘Phantom Black’ for body paint.

Both the R and RS models get additional features for their instrument readouts including two trip displays, fuel consumption, coolant temperature, warning symbol and service information, as well as “range to empty.” While the R and RS have increased seat heights from the S, they also both come with lower versions available. 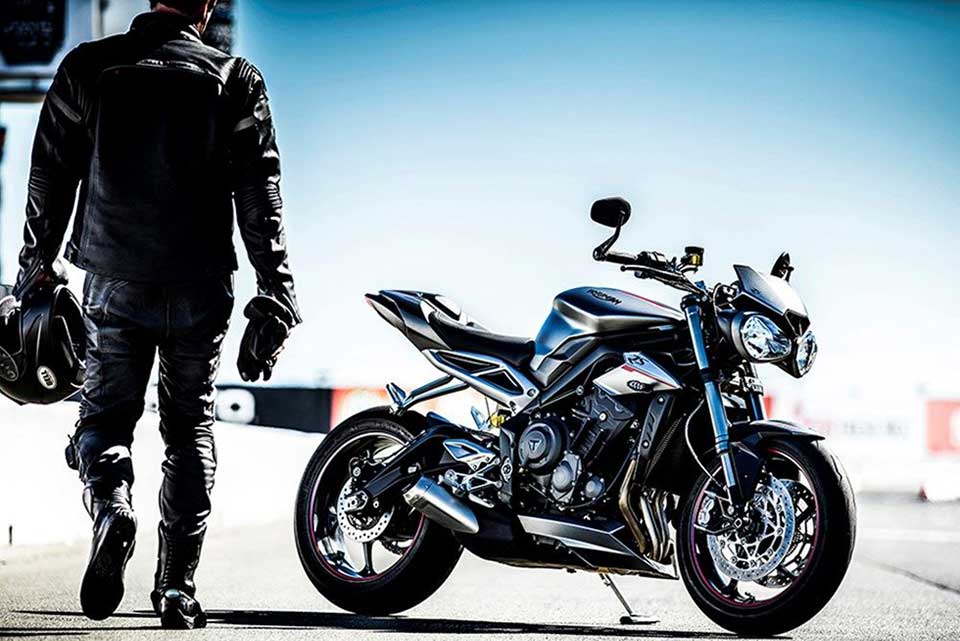 The new Street Triple R receives 4 riding modes adding Sport and Rider (programmable) to the basic Road and Rain settings seen on the S. The R also gets some performance upgrades like a slip-assisted clutch. Working the front of the R are fully adjustable 41mm inverted Separate Function-Big Piston forks (SF-BPF) with 115 mm of travel by Showa, twin 310 mm discs and Brembo M4.32 4-pistol radial monobloc calipers with switchable ABS. The rear acquires a fully adjustable Showa piggyback reservoir monoshock with 134mm of travel, and a single 220 mm disc with a Brembo single-piston caliper and switchable ABS. The Street Triple R makes 118 PS at 12,000 rpm and 77 Nm of torque at 9,400 rpm. Color schemes for the R include red accents and are ‘Jet Black’, ‘Crystal White’, and ‘Matt Aluminum Silver’. 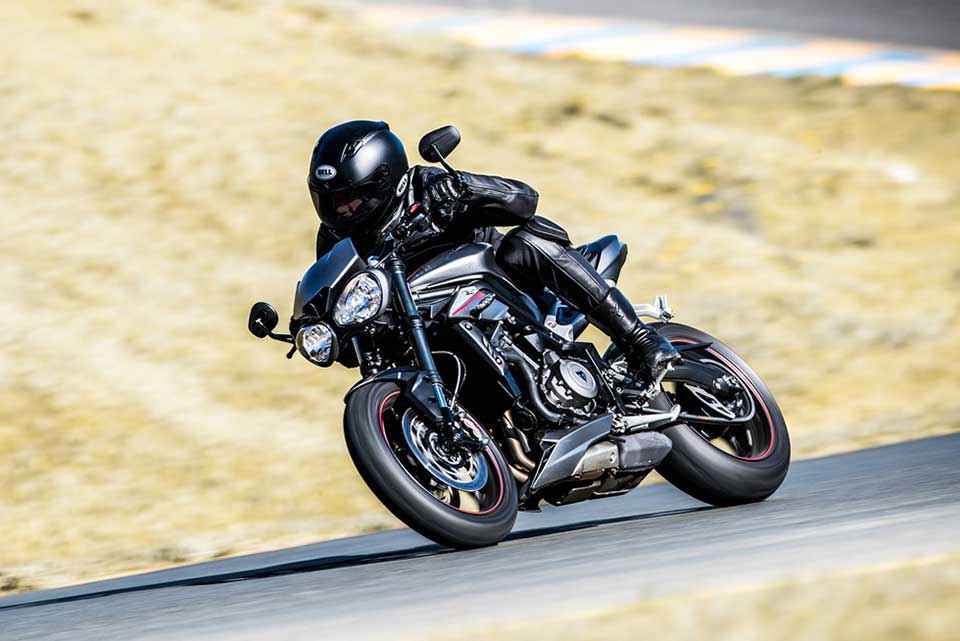 The Street Triple 765 RS is meant for speed hungry riders with more advanced riding skills, higher goals, and foreseeable track time. The electronic suite on the RS adds a ‘Track’ riding mode and its instrument panel comes with an exclusive lap timer. Like the R, the RS also makes use of a slip-assisted clutch. It is also the only bike of the three that gets Pirelli Diablo Supercorsa SP tires. Along with a bellypan and Quickshifter, the RS also gets better suspension and brakes as expected.

In front are fully adjustable 41 mm Showa Big Piston forks (BPF) with 115 mm travel and twin 310 mm discs with Brembo M50 4-piston calipers and switchable ABS. At the rear is an Öhlins STX40 piggyback reservoir mono shock with 131 mm of travel — as well as a single 220 mm disc, a Brembo single-piston caliper, and switchable ABS. The Street Triple RS makes 123 PS at 11,700 rpm and 77 Nm of torque at 10,800 rpm. With a silver rear subframe and some red accents, the color schemes available for the RS are Matt Silver Ice, and Phantom Black.