Thousands of riders banded together to ride in protest of recent events they deemed discriminatory to riders. The event saw riders from several motorcycle groups and clubs band together with Angkas partner-riders in the most recent protest ride at EDSA. The group rode along EDSA last Sunday, December 16, and culminated at the EDSA People Power Monument. The recent unty ride was held to protest of the possible implementation of the 'doble plaka' law and the recent Supreme Court decision that disallows motorcycle ride-hailing app, Angkas, from accepting passengers. Besides the EDSA unite ride, simultaneous protests were also held in the Visayas and Mindanao. 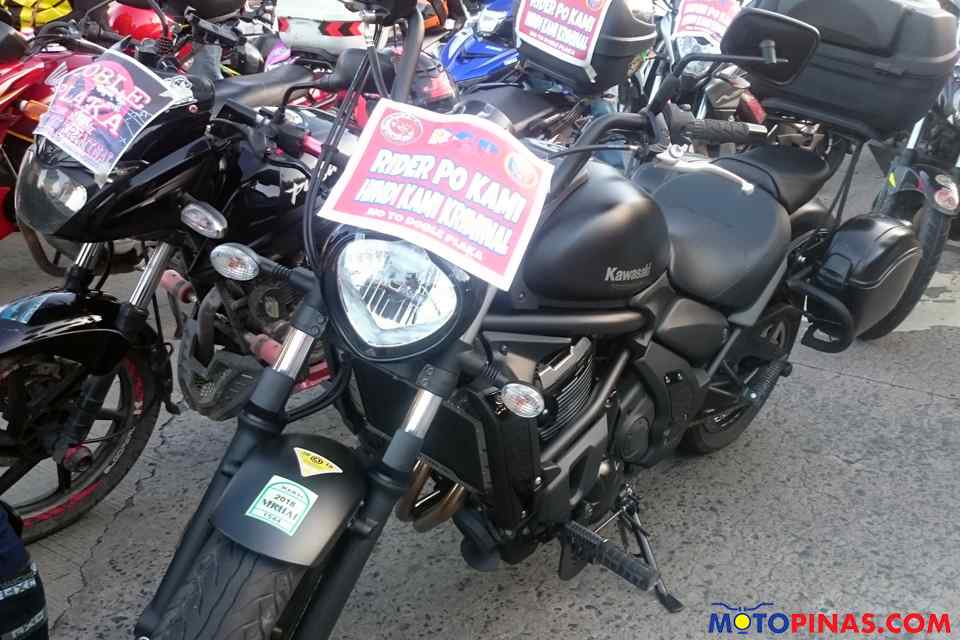 The 'Doble Plaka' law refers to Senate Bill 1397 or the Motorcycle Crime Prevention Act. It is currently under bicameral and once done, only requires the President's signature to be signed into a law. The Senate has been pushing for a 'doble plaka' (double license plate) provision in the law. This will require all registered motorcycles to be fitted with 200 x 225 mm (~ 8 x 9 inch) identical license plates in both the front and back of their vehicles. The group argues that the double plates are: costly to implement, as there are no provisions to fit a front license plate on any motorcycle; unsafe, as a front mounted license plate may come loose and injure its rider; as well as discriminatory, as the move is meant to make motorcycles easier to identify at the behest of the majority of the riding public. According to the motorcycle riders, it is clear and blatant discrimination against them as it already ‘profiles’ all the innocent motorcycle riders as criminals. 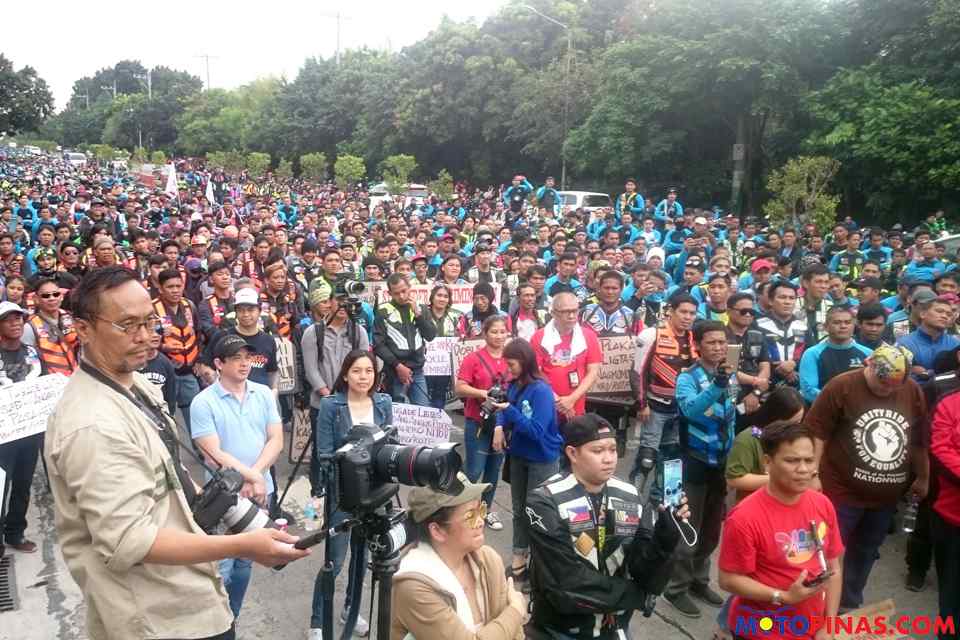 The large group was also joined by Angkas partner-riders, whose employment has been at risk due to the recent temporary restraining order issued by the Supreme Court against the Mandaluyong Regional Trial Court preliminary injunction that has allowed Angkas to accept passengers. The TRO has granted the LTFRB the authority to apprehend Angkas partner-riders caught hailing passengers as well as impund their motorcycles. The LTFRB has already issued orders to its deptized enforcers to do so. 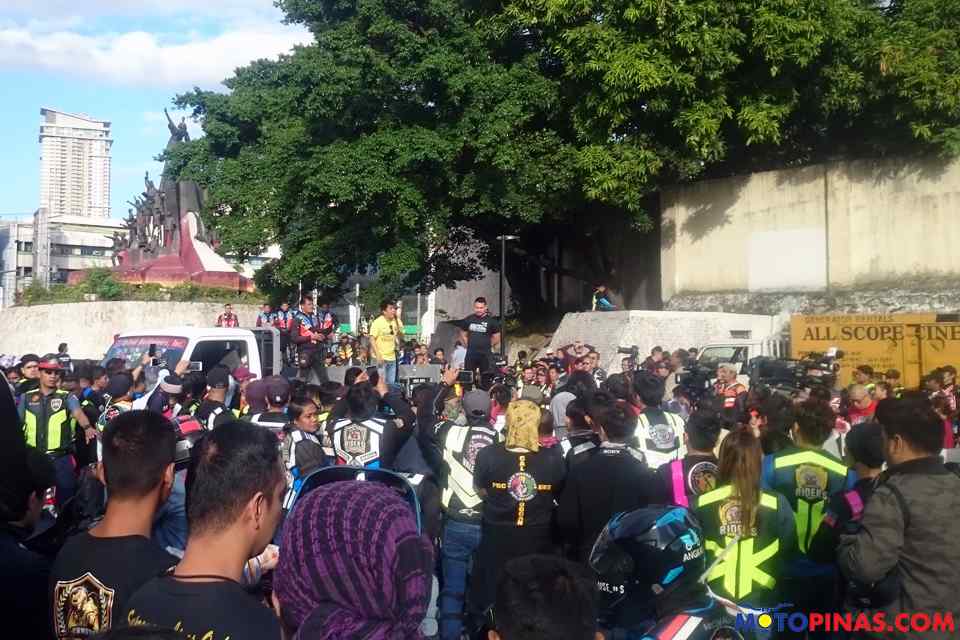 The LTFRB has stated that motorcycles cannot be used as public conveyance according to the law. It also adds that motorcycles are a dangerous means of public transport. Angkas on the other hand, claims that every type of vehicle may be involved in an accident if the driver or rider has no proper training. It counters that, because of their strict training and evaluation of their riders, they still maintain more than a 99% safety record and was servicing more than 25,000 passengers daily at the peak of its operations. 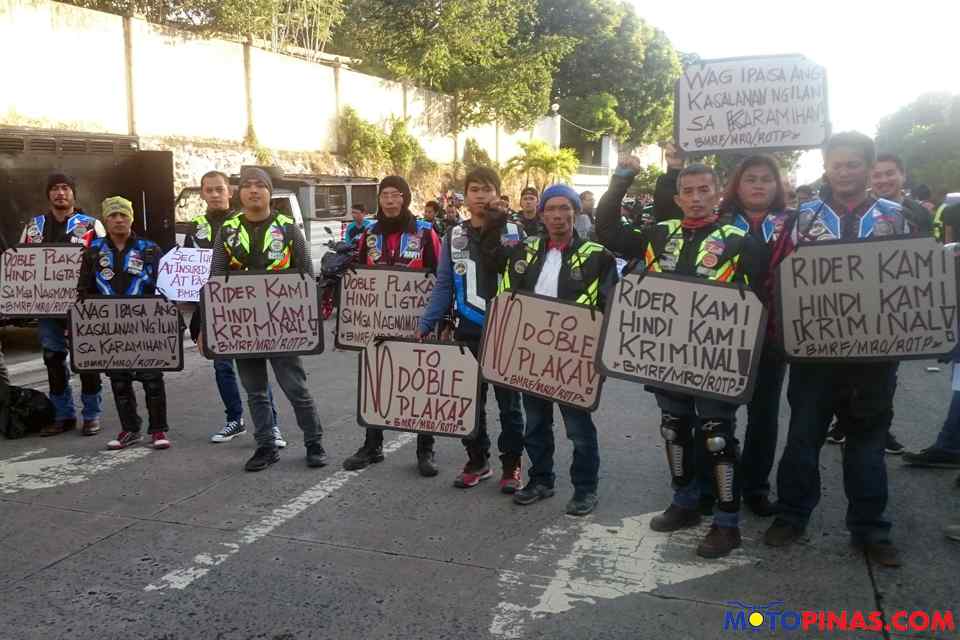 "This is not an anti-government or anti-Duterte protest and let us be clear with that,” said the organizers. “We have gathered here to voice our opposition against [Senator] Gordon’s ‘doble plaka’ as it is clear profiling and discrimination against all motorcycle riders and the LTFRB’s politicizing against Angkas and its riders who just want to have a decent job but most importantly offer a working solution to the transport crisis that our country is facing right now.”

"We have gathered here today having a peaceful demonstration to show the Filipino people the many affected workers and families who are dependent on motorcycle taxis. We are saddened by the recent events and we hope that we could influence the government to be sensitive to the plight of the motorcycle riding public,” said George Royeca of Transport Watch.