Now's the chance to try the new Asin Road You might want to postpone any upcoming rides to Baguio. Effective January 7, 2019 – March 22, 2019, the Department of Public Works and Highways (DPWH) is conducting road rehabilitation along Marcos Highway (aka the Agoo – Baguio City Road). The government agency is currently doing road works along the Road Slip at Kilometer 253, Barangay Cares, Pugo, La Union.

Motorists are advised to take alternate routes as moderate to heavy traffic is expected to take place during the road rehabilitation. Other available roads available for use going to and from Baguio include Naguilian Road (Bauang – Baguio City Road) and the Anduyan-Rizal-San-Pascual-Nangalesan-Asin Road via the newly-opened Anduyan Bridge in Tubao, La Union. 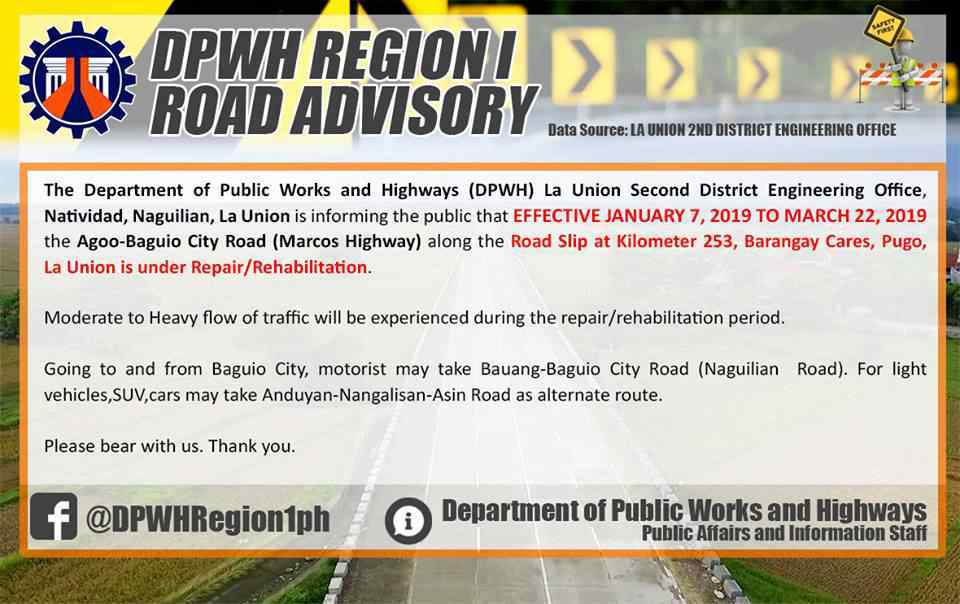 Kennon Road, sadly, is still closed to the public as the DPWH is still working on making the two-lane highway safe for motorists. Last September 2018, Typhoon Ompong battered the aforementioned road, resulting in rocks and other debris blocking portions of the major roadway. Currently, the DPWH is conducting curtain rock-netting operations along Kennon Road to keep any type of debris from falling. The DPWH has opened a new, efficient and scenic route that connects Lanao Del Sur to Bukidnon.

If you frequently pass the Estrella-Pantaleon (Rockwell) bridge, find an alternate route. It will be closed for renovations starting this Saturday.