Honda just revealed several of their off-road competition motorcycles for the 2018 model year. After an all-new redesign for 2017, the highly successful CRF450R dirt bike and CRF450RX closed-course enduro racer receive weight-reducing updates for mid-year release. Electric starters with lithium-ion batteries now come standard, and kick-start levers have been eliminated. The lack of a backup kick-starter may make riders nervous in the event of a mechanical emergency, but Honda hopes the weight saved will result in seconds shaved. Meanwhile, Honda’s smallest competitive motocrossers, the CRF150R and CRF150R Expert, receive new graphics for 2018. 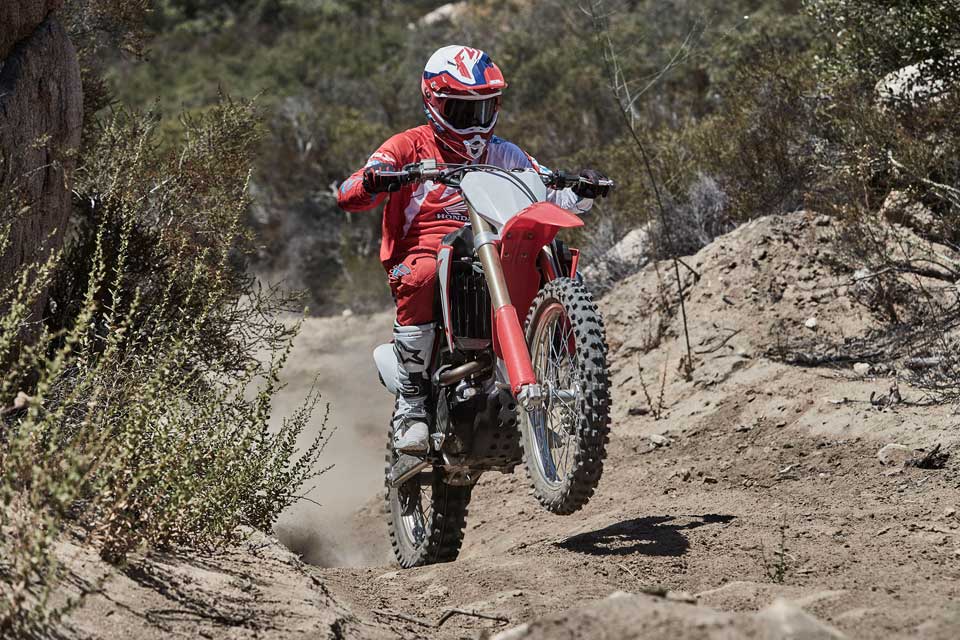 "It's been amazing to see the success of the CRF450R this year, and we're even more excited about this model with the improvements we've made for 2018. In addition to the obvious convenience, electric starting can save valuable seconds following a mid-moto mistake, and with the use of a lithium-ion battery, we can still achieve an extremely light weight,” said American Honda's Manager of Motorcycle Marketing Communications, Lee Edmunds. “These changes make the CRF450R more competitive than ever, and of course customers can continue to count on Honda durability, quality, and reliability.” 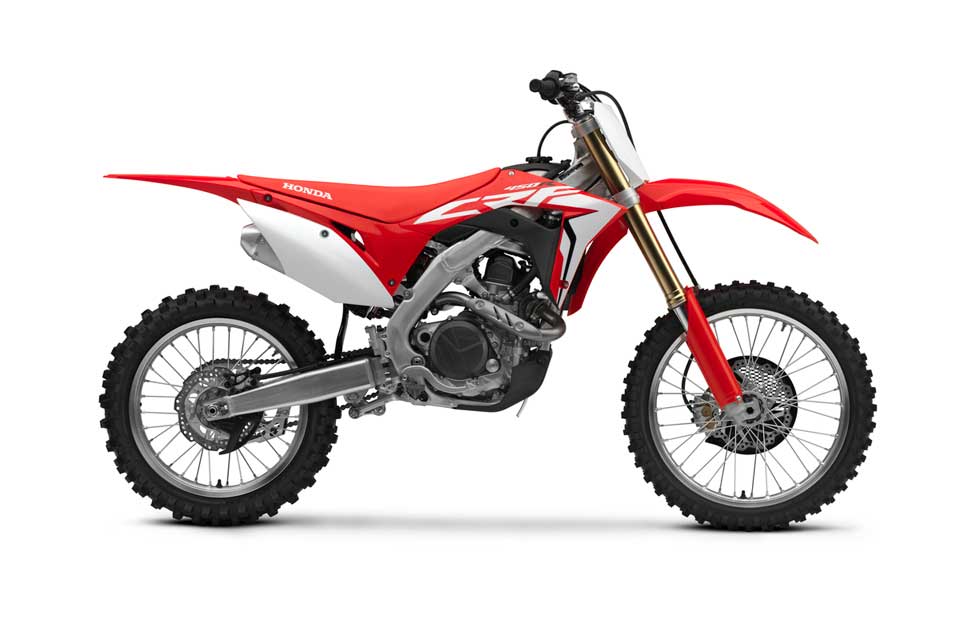 The fifth-generation CRF450R made its debut last year, using an “Absolute Holeshot” design philosophy. For 2017, Honda gave the competitive off-roader a significantly upgraded, liquid-cooled 449.7cc Unicam four-stroke thumper with a new downdraft intake layout. It's been available with an electric starter as an optional accessory, but for the upcoming 2018 model year the kick-start lever has been removed and the electric starter will come standard with a lithium-ion battery to save weight. Suspension settings for the 49mm Showa inverted forks and Pro-Link Showa mono shock have been updated, along with ECU settings for better power delivery. The 2018 CRF450R will be available as early as July, 2017 for $9,149 USD. 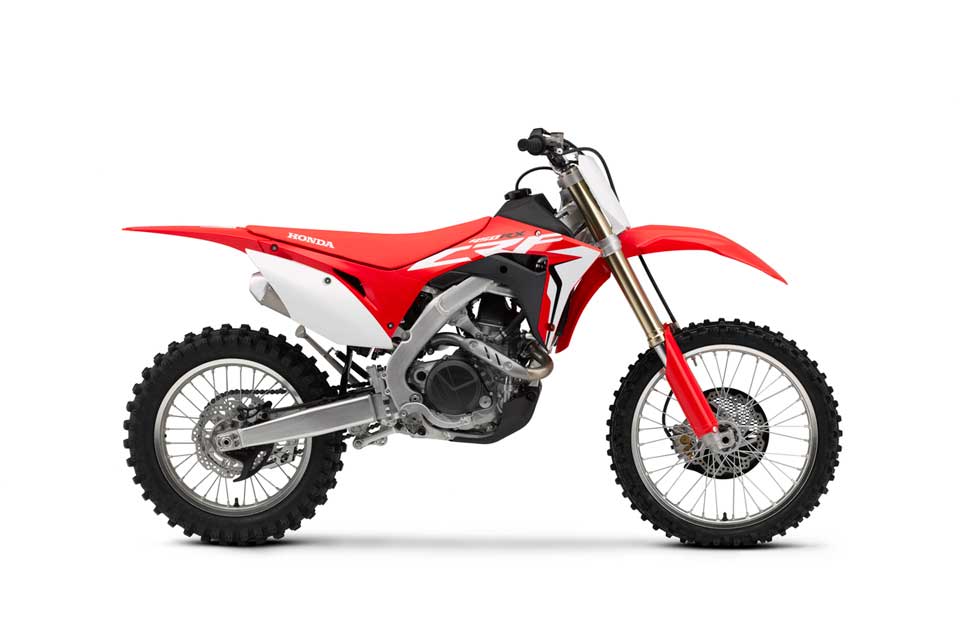 The CRF450RX is the enduro version of the CRF450R, purpose-built for closed-course off-road racing. While the CRF450R uses a 6.3L plastic fuel tank, the CRF450RX gets a larger capacity of 8.5L. The CRF450RX also leaves its kick-start lever in the dust in favor of a standard electric starter with a lighter lithium-ion battery. Other focused factors differentiate the RX from the R — like suspension settings for more technical riding, an ECU tuned more for smoothness, and a rear sprocket one-tooth larger than the R. While the R comes with a 21-inch front wheel and 19-inch rear, the RX gets an 18-inch rear wheel and different tires. The 2018 CRF450RX will be available in August, 2017 for $9,249 USD. 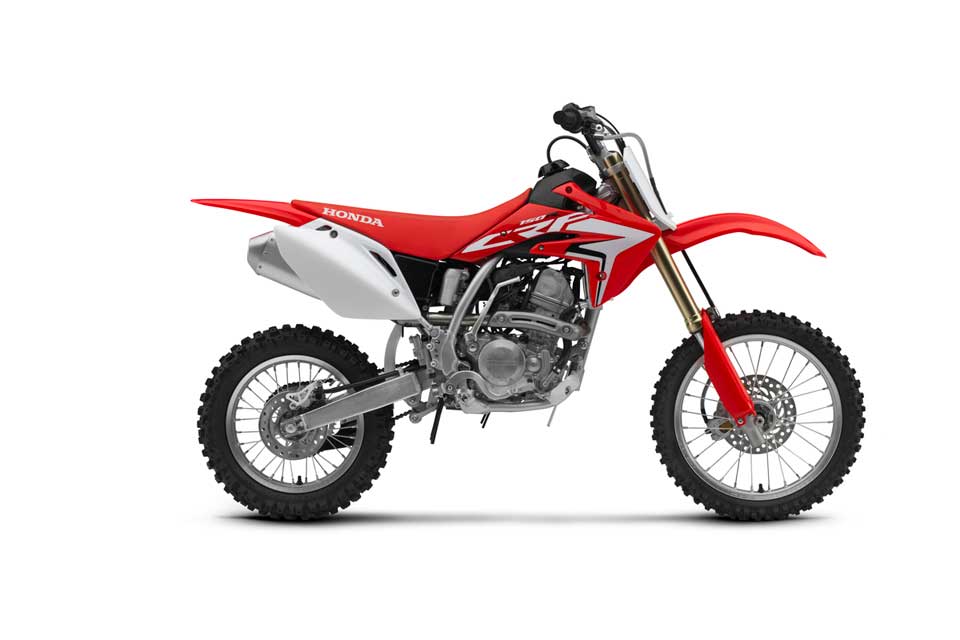 Honda’s smallest competition motocrosser, the CRF150R, also uses a Unicam four-stroke single-cylinder directly derived from the engines of its larger-displacement counterparts. It remains largely unchanged but returns for the 2018 model year with new graphics, aligned with the CRF450R’s design scheme. Honda additionally offers the CRF150R Expert version (also known as the CRF150RB Big Wheel) for taller riders. While the CRF150R uses 17-inch and 14-inch wheels, the RB or Expert rides on 19-inch and 16-inch ones. The Expert also feature more suspension travel, a longer swingarm, and a taller seat. Both the CRF150R and CRF150R Expert will be available as early as July, 2017 for $5,099 USD and $5,299 USD respectively.