Just last year, when Honda announced it will begin to offer big bikes locally, many noticed the considerable absence of some of its more iconic models, namely the Goldwing and the then newly revealed Neo Sports Cafe concept. This year, Honda Philippines is daring to put a damper on the recent launches of other big bike brands with their own new models. 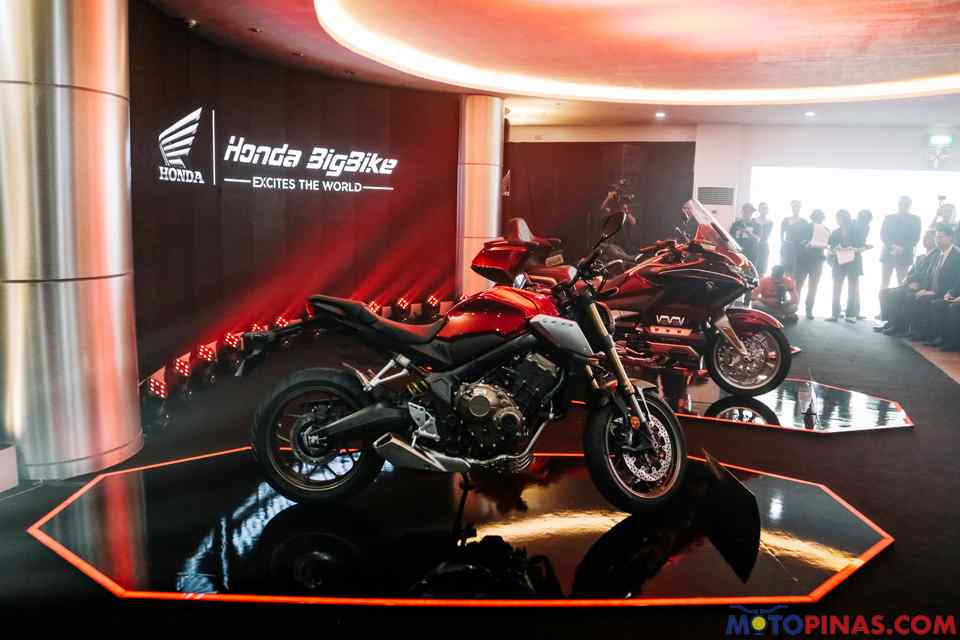 Unveiled just yesterday at the Honda Safety Driving Center in Bicutan were the highly-anticipated additions its touring and roadster lineup, the Neo Sports Café CB650R and CB1000R roadsters, and the Goldwing large touring motorcycle. Honda credits the growing market acceptance of its big bikes as the impetus to introduce these two iconic models. 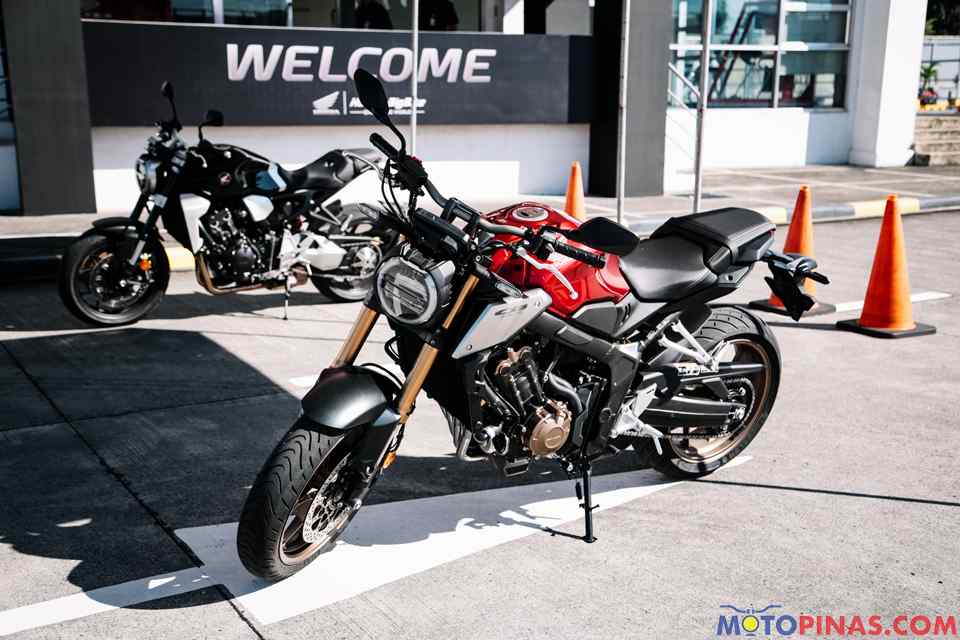 First unveiled as a concept bike at last year's Tokyo Motor Show, the production version was finally revealed early this year. After just a few months, the Neo Sports Cafe is finally coming to the Philippines. Slotting within its roadster category of offerings, Honda offers the Neo Sports Cafe in two distinct models. 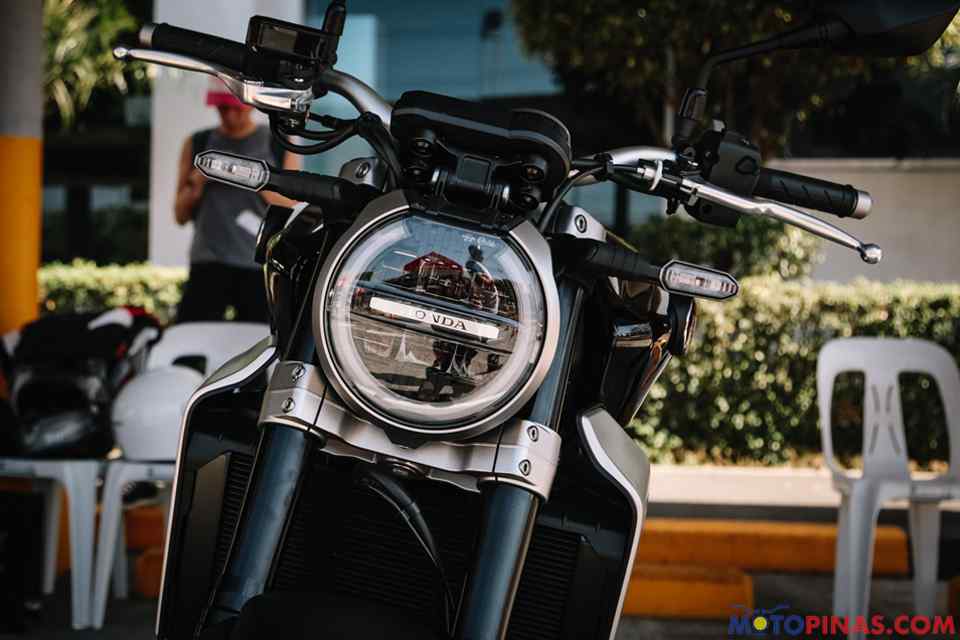 Both feature a neo retro design combining classic elements with modern styling for a unique look. Both motorcycles proudly display their inline four-cylinder engines and 4-2-1 exhaust manifolds with sculpted fuel tanks. Up front, they feature a classic round headlight, but with LED lighting. There’s also a new digital LCD panel for vital trip info. 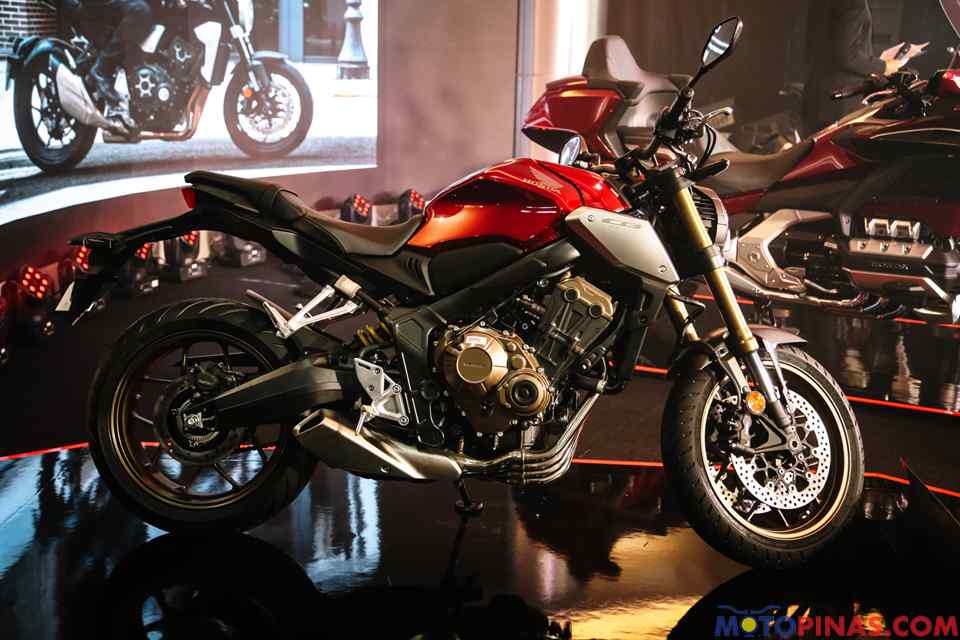 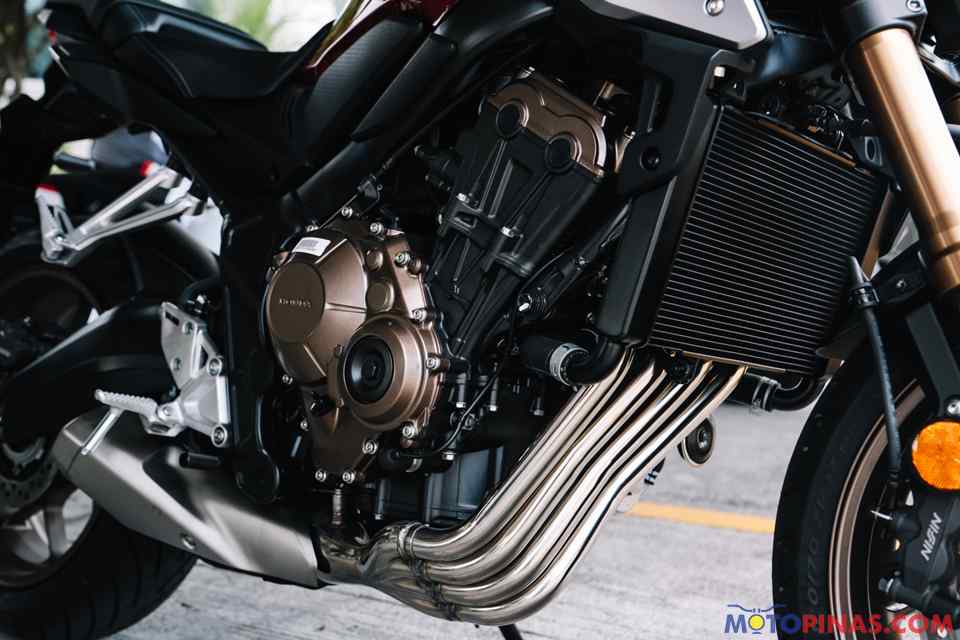 This engine is paired to a 6-speed manual that drives the rear wheels via chain drive. It also includes an assist/slipper clutch for easy shifting. It's brought to a stop by twin discs in front and a single disc behind governed by 2-channel ABS. The bike boasts of a Showa Separate Function USD Fork in front and a mono 10-stage preload rear shock with aluminum swingarm. The entire bike boasts of a light 203 kg wet weight. It features an accessible seat height of 810 mm. Range is covered by a 15.4 liter fuel tank. Honda says it's capable of an average 20.9 km/L consumption. The CB650R is priced at PhP 501,000 nationwide. 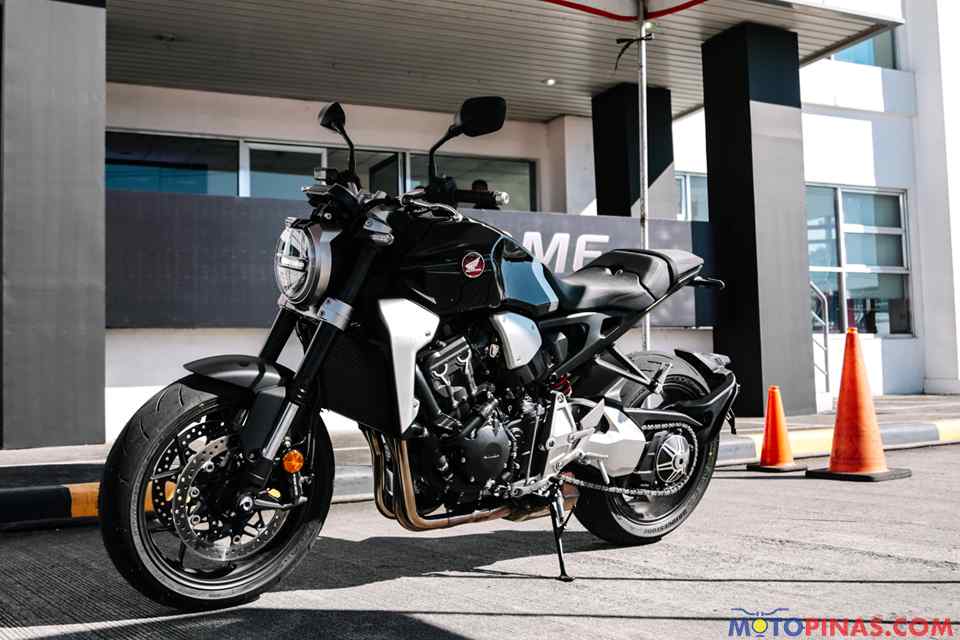 Those that desire more power can look into the CB1000R. This larger brother bears similar neo retro design with a flangeless fuel tank and an aluminum radiator cowl. Like its smaller sibling, it’s also built on a lightweight frame, this time a mono backbone steel frame. 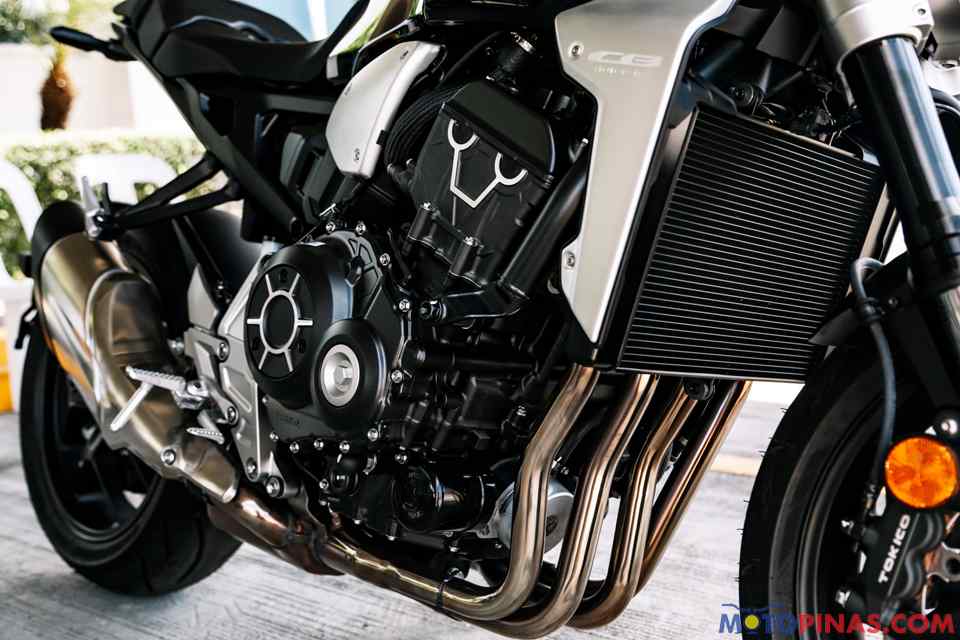 It’s powered by a 998cc liquid-cooled DOHC 16 valve inline-4 engine that produces 145.5 PS and 104 Nm of torque. The engine features selectable riding modes, Honda Selectable Torque Control and throttle by wire. This is paired with a 6-speed transmission via chain drive to the rear wheels Riders can glance vital trip info on its full LCD display. It’s brought to a stop with twin front disc brakes and a disc brake in the rear, governed by 2-channel ABS. The bike boasts of a Showa Big Piston Separate Function USD Fork in front and a Showa balance free rear cushion rear shock with aluminum swingarm. The entire bike boasts of a comparable 212 kg wet weight. It features a seat height of 830 mm. Range is covered by a 16.2 liter fuel tank. This model averages 17.2 km/L fuel consumption. The CB1000R is offered at PhP 865,000 nationwide. 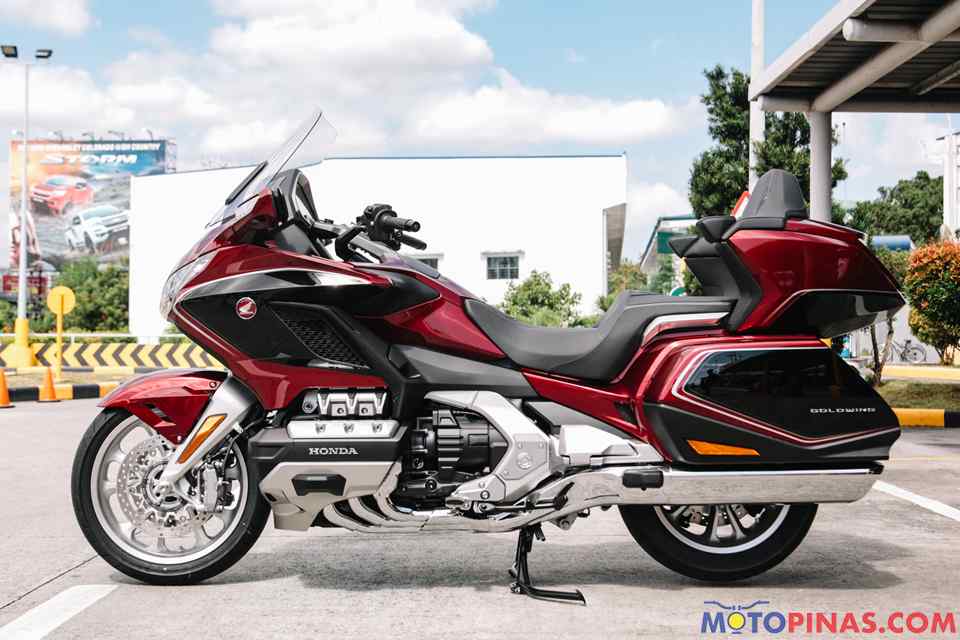 Easily the most anticipated is the Goldwing large tourer. This massive motorcycle is the latest model in the line’s 40-year lineage. It’s powered by a 1,833cc liquid-cooled, horizontally opposed 24-valve SOHC 6-cylinder, paired to a 7-speed dual clutch automatic transmission. Power is delivered to the rear wheels via a driveshaft. The transmission also offers a manual mode, allowing the driver to shift via buttons on the handlebar.

It’s designed to be the ultimate long-distance motorcycle, boasting of features like cruise control, Honda Selectable Torque Control and four ride modes like tour, sport, rain, and econ. It even includes unique features like a crawling mode and reverse crawling mode to aid the rider when parking it. It’s designed to be supremely comfortable as well, boasting of a double wishbone front suspension and all aluminum single side rear swing-arm. It also has 4 electronically adjustable preload settings. A keyless system makes it convenient to use.

As for safety, it comes with full LED lighting, a built-in airbag for front collisions, electronically controlled combine-ABS, and hill-start assist. The Goldwind is now offered at PhP 1.88 M.

“We want to continuously expand and improve our line-up to suit the improving lifestyle of our riders. With this, we are happy to introduce the newest big bikes which will once again excite Filipino riders," said Jomel Jerezo, General Manager of Motorcycle Sales Office, Sales and Marketing Division of HPI.

The MMDA warns motorists to ready themselves for heavy traffic tomorrow, the start of the long Christmas break. Motorcycle groups and clubs were joined by Angkas partner-riders to shed light on the recent events that they deemed discriminatory against riders.