Honda has been spending all year celebrating the 60th birthday of the Super Cub. The first Honda Super Cub C100 was built at Honda’s Yamamoto factory — 10 years after the company’s inception. It debuted in 1958 and its subsequent release in the US went on to spawn arguably one of the most legendary phrases in advertising history: “You meet the nicest people on a Honda.” Japan is drunk on Super Cub enthusiasm right now, and 2018 has seen numerous Cub related events, meets, exhibitions, and announcements. Honda has also collaborated with renowned Japanese manga artists for the Super Cub’s 60th anniversary. 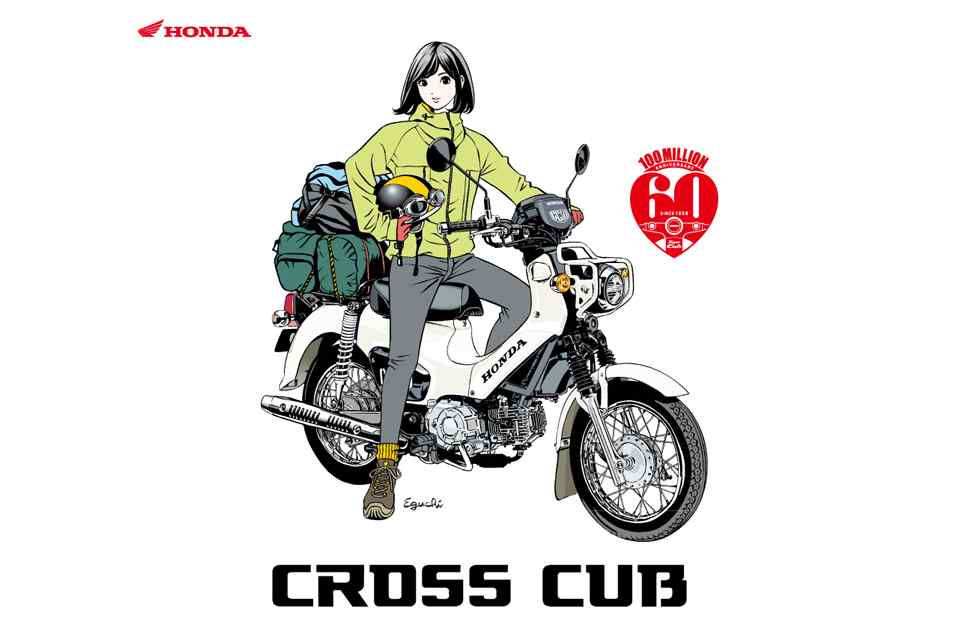 Hisashi Eguchi has worked as a manga artist for 40 years and is one of Japan’s most prominent illustrators of female characters. His work has moved generations of Japanese fans and he himself previously owned a Super Cub — making him a natural fit for this collaboration. Honda made several requests for Eguchi: the models had to not reveal skin and needed to wear helmets and gloves. Eguchi said he wanted the Cub girls to have boyish charm. “My preference does not like high fashion… I like cuteness in ordinary clothes,” Egushi said. “My taste is everyday. Converse and Doc Martens are classics just like me… If you try draw fashionable things, they will not be cool as fashion shifts.” 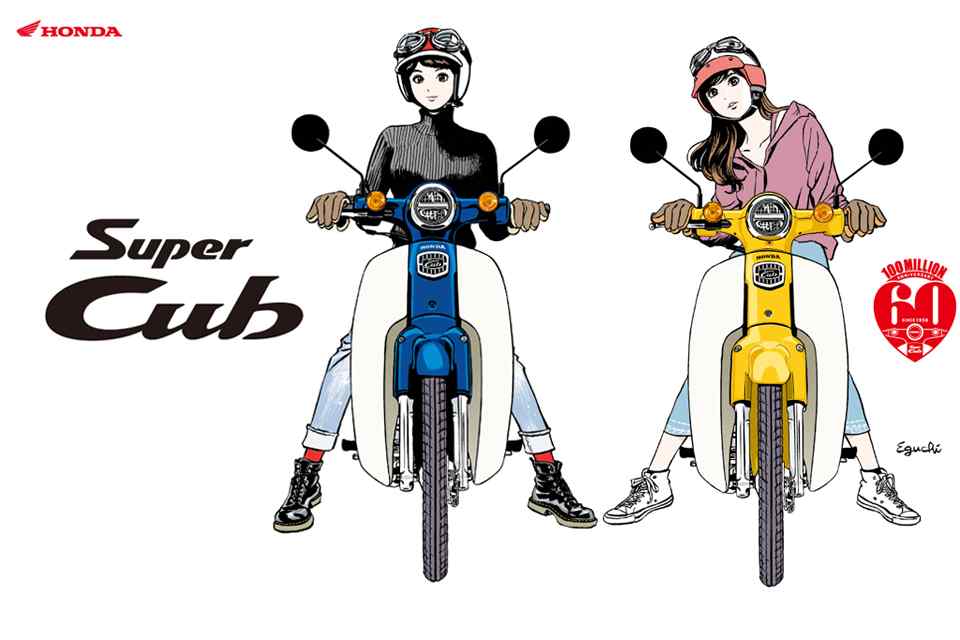 “As I draw illustrations and pictures, new talent comes out one by one, and I feel like I’m getting old… I am aiming for an old-age feeling. I feel sympathy for the Super Cub in that sense. It is the same with the Super Cub, and there are things like jeans which will be cool even after a long time. I want to be such an existence so I think I am attracted to the Super Cub in that way,” Eguchi said. “Most of my drawings show admiration and respect for women. I am often asked, ‘Are you drawing your ideal girl?’ But that’s not the case. I draw the girl I want to be. I would have liked to wear these clothes if I were born a girl… When girls say they want to become illustrators because of me, I feel greatly satisfied. The frustration that I wanted to be born a woman is solved a little by that and I’m glad… Women have strength as living things… I think every woman can be beautiful.” 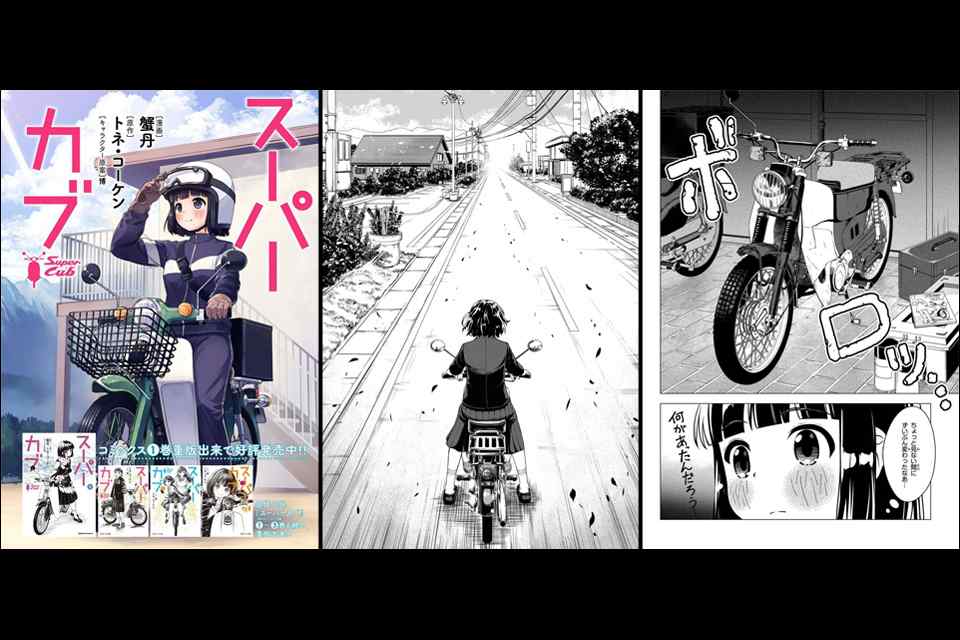 Honda has been periodically releasing a manga series to celebrate the Super Cub’s 60th anniversary. These Japanese “slice of life” comic books are written by Tone Koken and illustrated by Hiroshi. They tell the story of a lonely high-school girl from Yamanashi, who learns to ride a Cub. Her experiences with the bike open her up to newfound friendships, appreciation for life, and a sense of adventure. 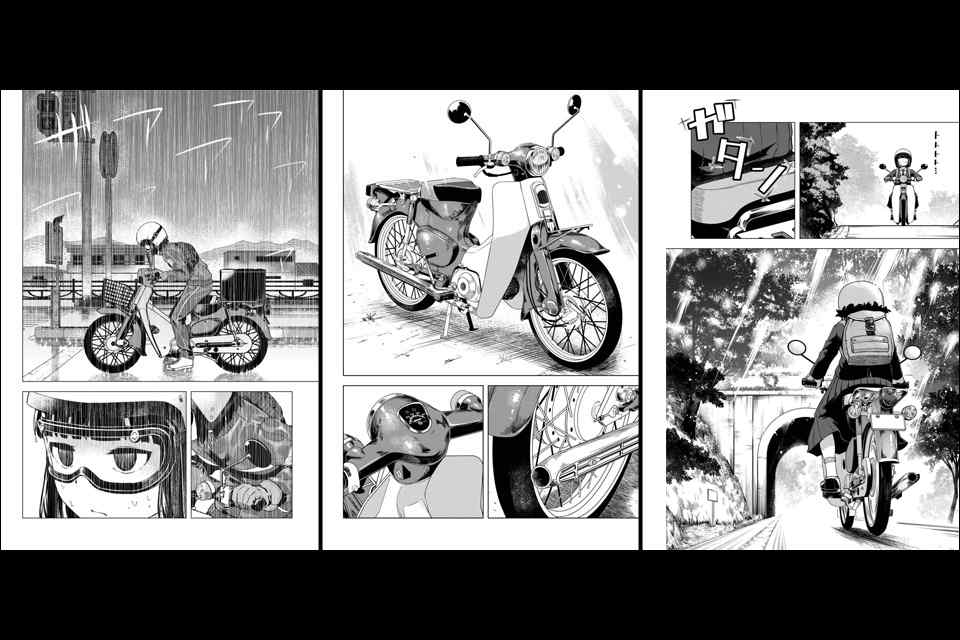 We don’t speak or read Japanese so we can’t really tell you exactly what’s going on. At one point we know that the main character learns to enjoy riding in the rain, meets a female mechanic, gets intimidated by a truck driving right by her on a windy mountain road, and takes on a delivery gig. Nevertheless, enjoy some of these images taken from the Super Cub manga, which you can view online. 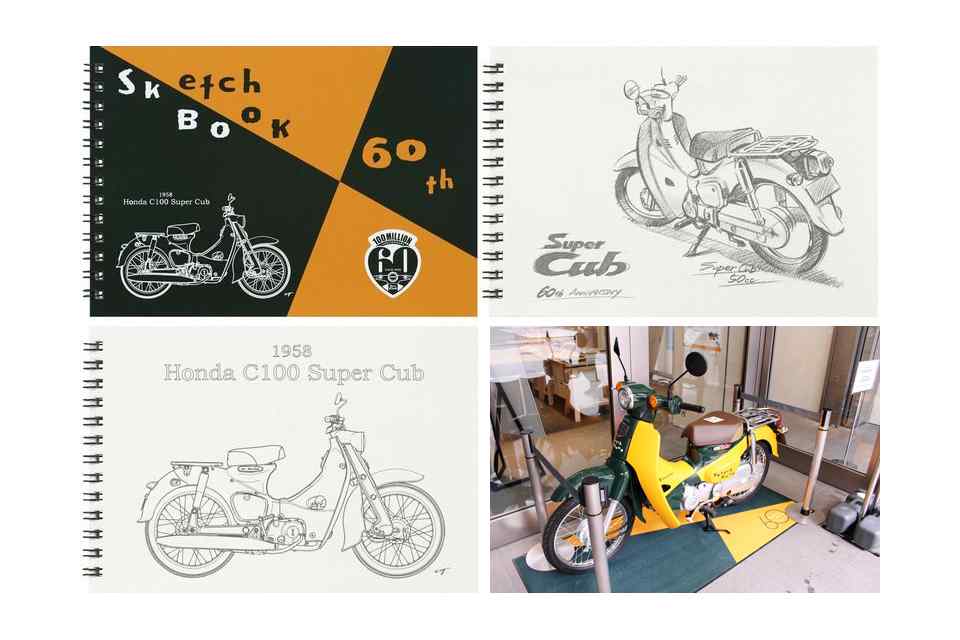 You can now create art in your very own Super Cub themed sketchbook. Ginza Itoya is Tokyo’s most famous stationary shop (in fact, it’s nearly 115 years old) and in April, a Super Cub was displayed on the first floor of the 12-story flagship store wearing the colors of the prestigious Japanese sketchbook brand, Maruman. Honda collaborated on a limited-edition sketchbook celebrating the joint 60th birthday of both Maruman and the Super Cub. Royal Enfield unveiled its Adventure Team to wave the flag and share the passion for riding. The PNP-HPG will not accept photocopies of marriage certificates. They will only accept certified true copies.

Pasig Mayor, Vico Sotto says backriding in his city is not allowed until there are clear rules.

Another petition for certiorari and prohibition has been filed against the Doble Plaka Law.