Touratech is no stranger to custom bikes, but to usher in the new year, the purveyors of aftermarket parts for adventure riding have pushed the envelope with their BMW R 1200 GS “Rambler” prototype. For the project (formerly codenamed ‘K 199’), Touratech was inspired by BMW’s crazy HP2 Enduro from the late 2000s then partnered up with BMW Motorrad and sister company TT-3D with one clear-cut objective: build a high performance adventure bike that weighs less than 200 kg.

The Rambler isn’t a mere aesthetic concept, it’s a working prototype with a host of conversions and new parts designed at TT-3D in Murnau, Germany and manufactured at Touratech in Niedereschach. There isn’t just one Rambler either, Touratech made two — identical in every way except color. One comes in Touratech’s black, gray, and yellow; the other showcases BMW’s signature theme of white, blue, and red. 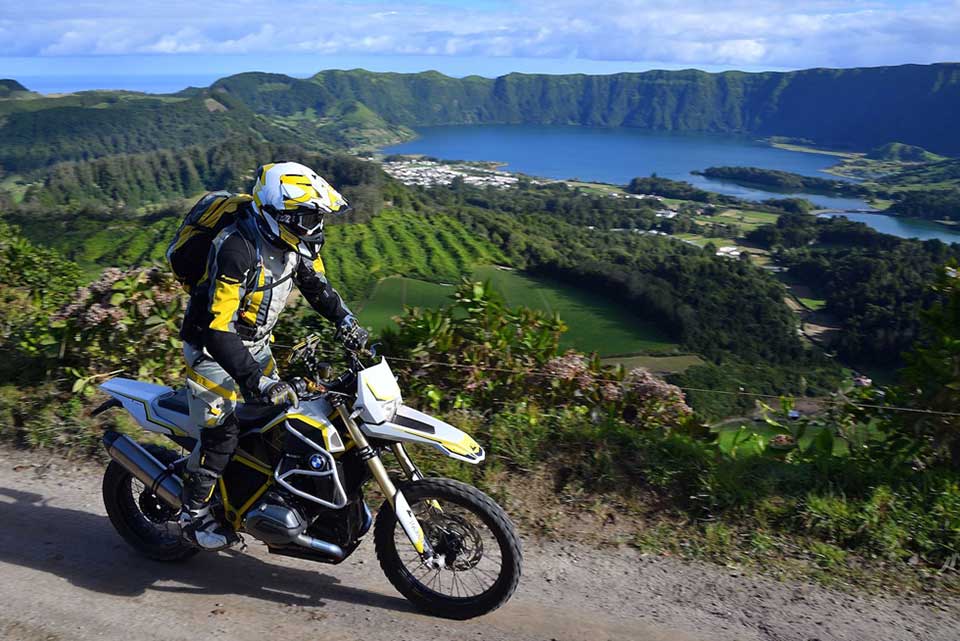 The R 1200 GS Rambler isn’t even based on the R 1200 GS, with Touratech choosing to start with the chassis and liquid-cooled boxer engine off an R 1200 R due to the R frame taking telescopic forks instead of the GS’ telelever front. What comes off the GS are the final drive and swingarm.

To shed around 50 kg of weight, Touratech stripped down bodywork and unnecessary mounting brackets. Carbon fiber was used for the Rambler’s reinforced plastic air box, rear fairing, skid plate, and fender. Touratech used aluminum for the integrated fuel tank subframe, the main fuel tank, foot peg brackets, rear silencer bracket, and for mounting the bike’s fairings and brake lines. The foot pegs themselves are titanium, while front and rear bodywork are plastic. 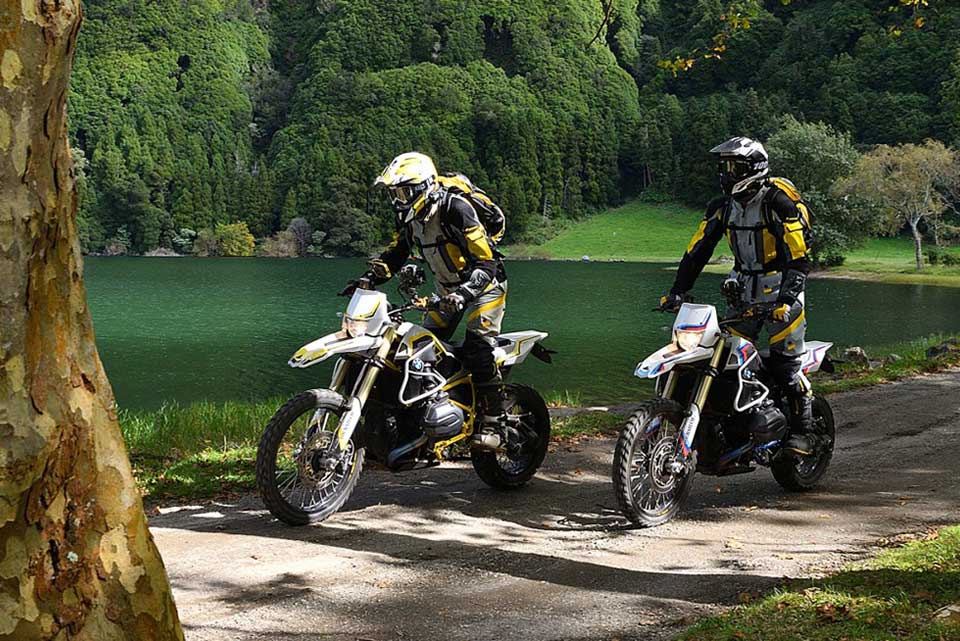 The R 1200 GS Rambler features TX handlebars and ultralight radial-pump master cylinders for the bike’s clutch and brake, both by Magura. Stahflex provided the stainless steel braided hosing for the brake lines, and the exhaust system of titanium and carbon fiber was specially created by Akrapovič for the Rambler. Touratech also chose to install a lighter lithium-ion battery. The lights were taken from a BMW R nineT kit and a G 450 X kit, while the LED turn signals came from an R 1200 GS. The triple clamp was custom made by XTRIG. 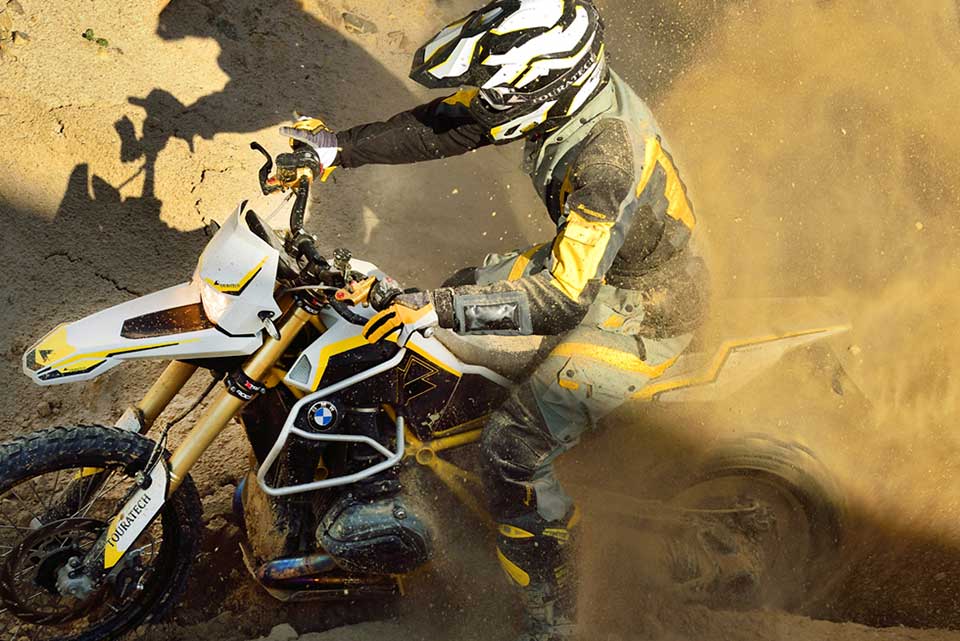 The front forks were reworked from the BMW F 800 GS Adventure — tuned by Touratech Suspension with an ‘Extreme cartridge kit’ and 230 mm of travel. Touratech Suspension also custom made the ‘Extreme type’ mono shock with 200 mm of travel. A single 300 mm disc brakes the front, as does a 276 mm disc at the rear. To stress the off-road designation of the bike further, Touratech utilized Metzler Karoo 3 tires on custom made Haan Excel wire spoke rims. 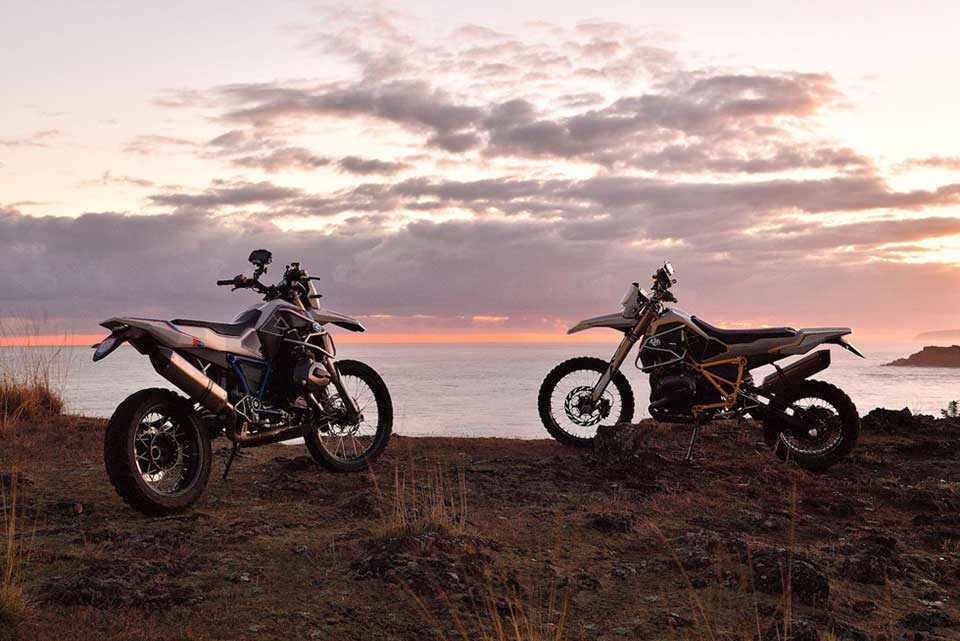 According to Touratech, choosing to mate the R 1200 R Roadster’s engine-gearbox assembly with the shaft drive and swingarm of the GS “gives the Rambler a directly responsive, high-torque drive system…” While the BMW HP2 Enduro made 106 PS from a motorcycle with a dry weight of 175 kg, the collaboration between Touratech and BMW Motorrad has birthed an agile, race-ready, and dirt-crazed beast weighing 199 kg dry while making 125 PS.