Last February 2017, the LTO had issued a memorandum that no motor vehicle (including motorcycles) should be released out of the showroom without registration with a stiff penalty of P10,000 for the buyer and P100,000 for the dealership per vehicle. The memo was met with complaints from consumers, dealers and manufacturers and has since been suspended “until further notice.” For the time being, the “No registration, No travel” policy was in effect, giving buyers only 7 days from the time of purchase to register their vehicles. Some dealers however, circumvent this policy by issuing multiple ‘certificates of stock receipts’ with varying dates as proof that the buyer had only bought the vehicle and is still within its 7-day window, allowing the owner to use the vehicle while the registration is being processed. Some owners alleged that some cases took as long as 1-2 years to complete.

President Rodrigo Duterte slammed this practice during his speech at the 24th National Federation of Motorcycle Clubs of the Philippines Convention in Legazpi City, Albay last April.

“The roads are not really safe. Maraming motorsiklo na mura (There are a lot of cheap motorcycles) and everybody [can] buy [one]… Walang mga lisensya yan at walang rehistro. Walang mga insurance (None of these buyers have a license, registration, or insurance)… If you look at it very carefully, there is really anarchy in the streets. Pupunta ka lang sa casa walang registration, wala lahat and we have to correct this, ibibigay sa iyo ang motorsiklo for as low as P2,000 (If you go to a dealer, there’s no registration, nothing. The motorcycle can be taken home for as low as P2,000).” 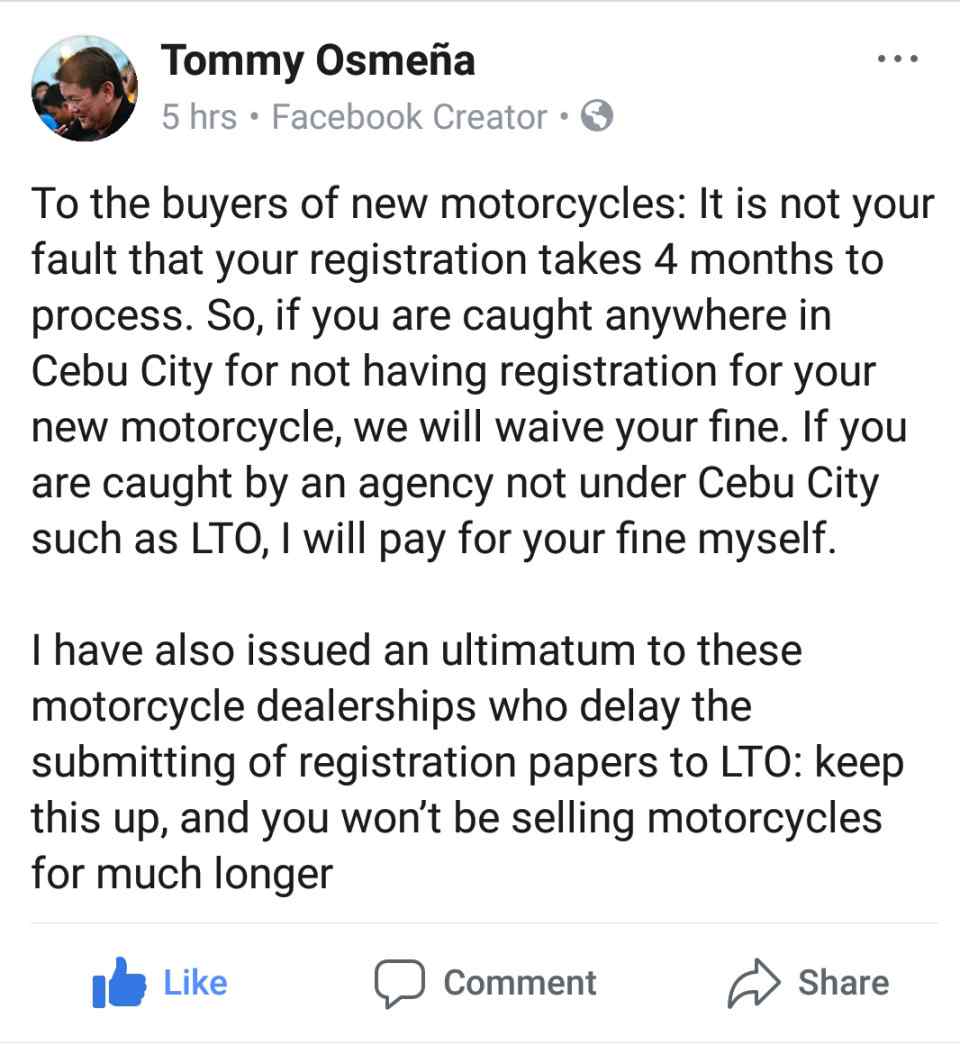 “To the buyers of new motorcycles: it is not your fault that your registration takes 4 months to process,” according to his official Facebook page, posted on June 25, 2018.

The mayor pointed the blame on dealers that process the registration of newly released motorcycles in batches, filling a quota before forwarding the necessary documents to the local LTO office to begin the registration process.

Dealers were quick to come to their own defense, with one of the comments in the mayor’s post arguing that it was the LTO’s fault and not them. The dealer stated that the local LTO office in Cebu City only has 2 computers tasked with processing new motorcycle registrations, with hundreds of dealers queued up for it. The commenter also cited red tape and fixers as cause of delay.

The LTO, in its defense, maintained that it only takes 2-3 days processing time for new vehicle registrations should dealers submit the required documents immediately.

Mayor Tommy Osmeña ended his post with a warning: “I have also issued an ultimatum to these motorcycle dealerships who delay the submitting of registration papers to the LTO: keep this up, and you won't be selling motorcycles for much longer.” Ducati issues a worldwide recall for units of the 2017-2018 Ducati Supersport and Supersport S.

Honda hopes to revive its 60s success in the US with the return of its two most iconic small models. With travel restrictions and checkpoints to deal with, new plates are the last thing riders need.