With some 70 years passing since a Brough motorcycle has last rolled off its assembly line, the SS100 (named for Super Sports and its then impressive 100 mph top speed) is making a comeback. First founded by George Brough in Nottingham, England in 1919, the British bikes were known as the “Rolls-Royce of motorcycles” with each unit modified to customers' desires and assembled by workers wearing white gloves.

They were built for only one passenger, individually tested, and with a certificate guarantee that the motorcycle will achieve its promised 100 mph top speed, personally signed by Brough himself. Its most famous patrons include T E Lawrence, and Lawrence of Arabia. Broughs were sold in small numbers, with just over 3,000 produced over its 20-year run.

The revived brand first made its presence known at the 2014 Milan International Bike Show, with a modern prototype of its SS100. Helming the resurgence is Mark Upham, a former Ducati dealer who supplies parts for classic bikes. Upham had been restoring Brough Superior SS100's to original specification until he had decided to buy the rights for the Brough Superior name in 2008. 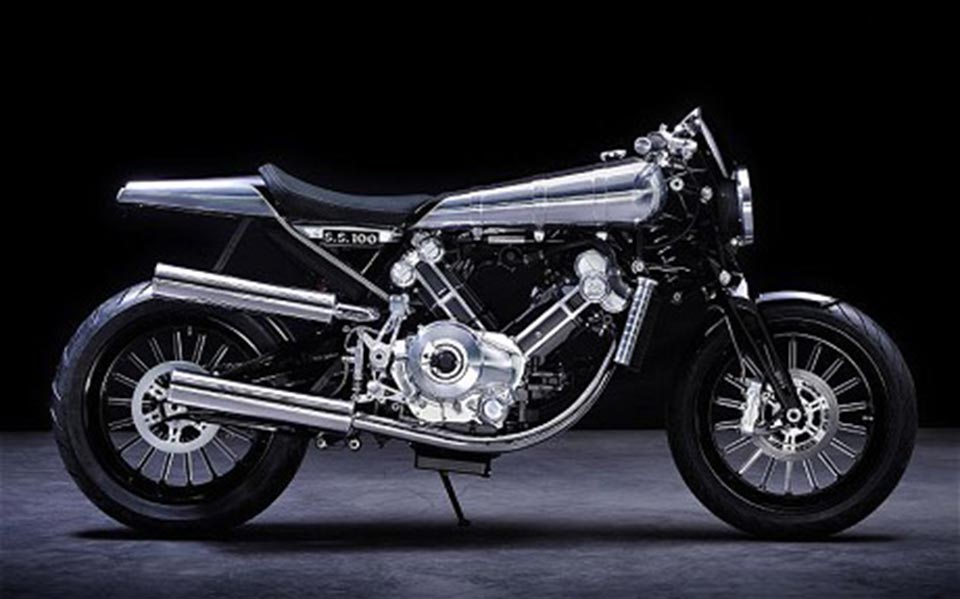 The new Brough is based out of Toulouse, France. The company is gearing up for production with units built by Boxer Design, known for its own Boxer bikes. The SS100 is powered by a DOHC, liquid-cooled 88-degree V-twin engine, developed by Akira, a Bayonne-based engineering firm known for its racing Kawasaki ZX-10R engines.

The chassis is composed of the engine as a stressed member, with titanium tubes holding magnesium fior doublewishbone front fork struts. The front brakes are made of four small diameter aluminium-ceramic discs, designed to be less obtrusive to its classic look yet still provide modern stopping power. The rear powertrain is supported by a progressive system, with a single disc and two piston caliper.

The motorcycle has a dry weight of 186kg, and can produce anywhere from 100 – 140bhp, for road or track specification respectively. As a nod to the original, the naked roadster features a cigar-shaped petrol tank with a polished finish, and a large black-faced dial for instrumentation. Honda has revised its entire line-up of CRF competition bikes, with the CRF450R's especially configured for moto races.