Benjie’s Cafe Racer (BCR Designs) is a 10-year-old operation that busts out one beautiful bike after the other. Aside from creating full, complete machines of utter beauty and superb craftsmanship, the custom shop is a purveyor of fabricated pieces made-to-order. The work of BCR has made ‘Benjie’ a global name in the cafe racer scene, thanks to features in numerous international publications… But what most people hadn’t realize was that Benjie is Filipino—not until the recently concluded Motobuilds 2016 custom motorcycle show where he finally made his local, public debut. Meet one of his creations we got to see in person at the shindig: the world-famous ‘Velocita D’Epoca’ Ducati 900SS/SP.

Before you take out your checkbook, understand that BCR does not typically cater to the Philippine market. The confusion surrounding where Benjie is from stems from two major reasons. The first is that his website cites New Jersey as BCR’s prime address, because the company is registered stateside for export and purveys parts primarily to customers abroad. Benjie was an immigrant who grew up in NJ before his current status as a Philippine resident. His proud identity as a ‘flipper’ still holds its significance. He credits the training he received in the US as an automotive mechanic and still lives a dual PH-NJ life; he still spends time stateside. 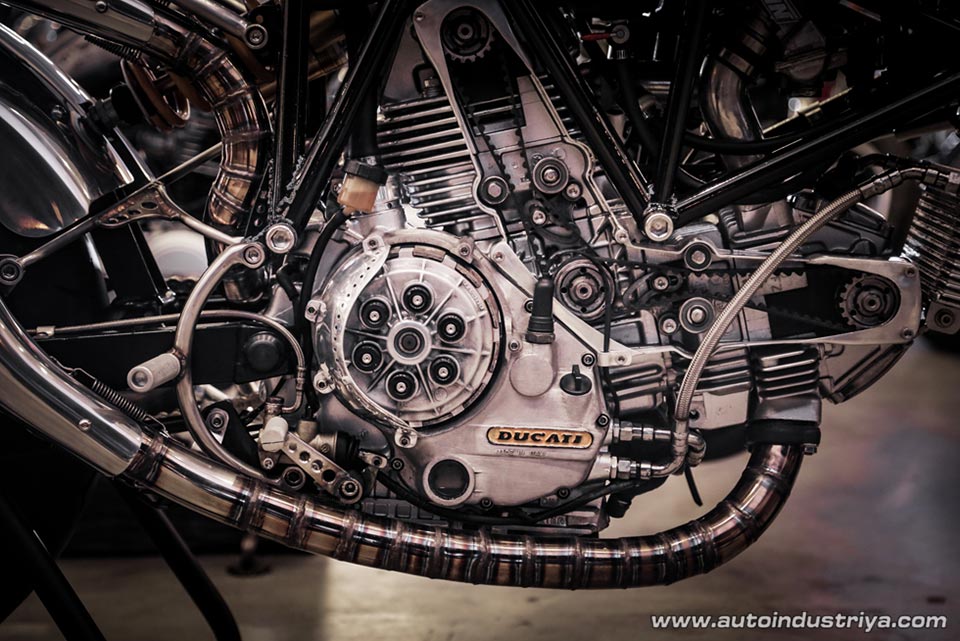 The second reason for the puzzle is that Benjie is just mysterious. He’s your typical introvert with hermit tendencies, a dash of eccentricity, and a genuine aversion to too much attention. The man behind the scenes holds strong principles when it comes to his disdain for personal promotion. Benjie, when confronted by eager journalists, is more likely to geek out over his process, purposefully diverting focus away from himself and channeling it back to his trade. He’d rather let his work speak for itself, and that is something to be respected and even admired.

Having said that, enough about Benjie. Let’s turn our gaze back at ‘Velocita D’Epoca’ as he would wish. Leaving the comfort zone of old Japanese bikes, BCR decided to tackle the Ducati 900SS/SP. After acquiring the base bike, the project gathered dust for over a year until the time was ripe. BCR’s recent builds were trackers and scramblers, so it was time to go back to paying tribute to the cafe racers of the ‘50s and ‘60s. The Ducati 900SS/SP can be a favorite base for custom builders due to its inherent trellis frame and the undeniable performance that it offers—the modern yet raw power of the ‘90s combined with that Italian sporting heritage synonymous with the Ducati brand. Naturally, its L-twin packs a punch both in appearance and celerity. 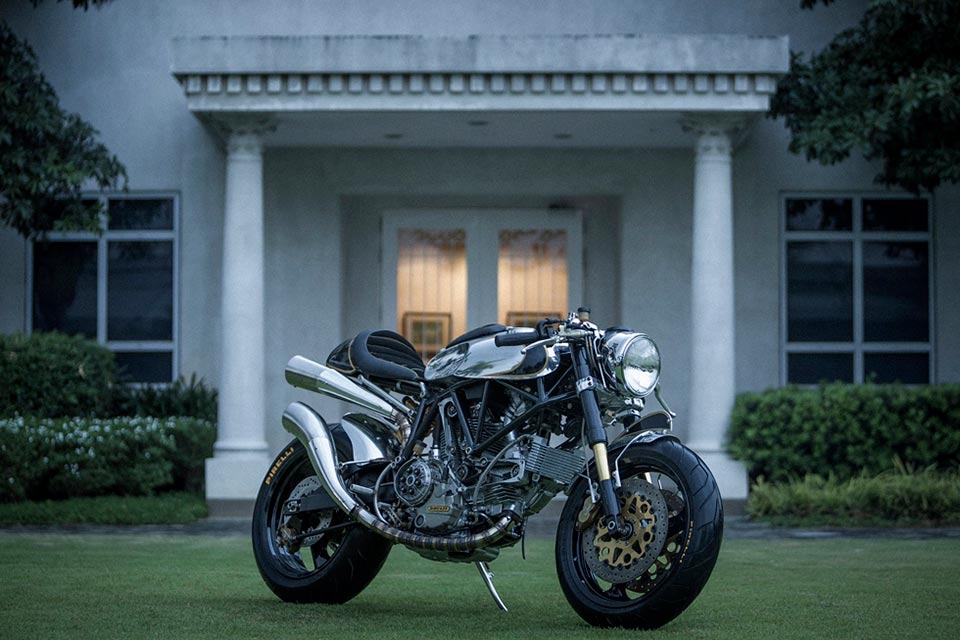 The guts were maintained, including the Showa inverted forks, Ohlins mono shock, and Brembo brakes. The bike came to the shop with a Keihin FCR41mm carburetor which required re-jetting for the custom, serpentine exhausts ending with hand-hammered mufflers. The engine was kept the way they got it, already with racing cams and heads. Bolts were changed to titanium by BCR. The sculpted aluminum tank, tapering down to knee dents, creates an abundance of visual stimuli all on its own.

There’s the Norton-inspired oil temperature gauge and the flush twist cap with porthole points for gas. There’s also the tank strap, stainless steel with a latch—meant to evoke the look of wristwatch bracelets. Notice that the tank doesn’t follow the angle of the trellis. BCR widened the front to partially cover the frame, readjusting the lines for a lower angle of attack. Fenders are aluminum as well, mounted with stainless steel brackets. 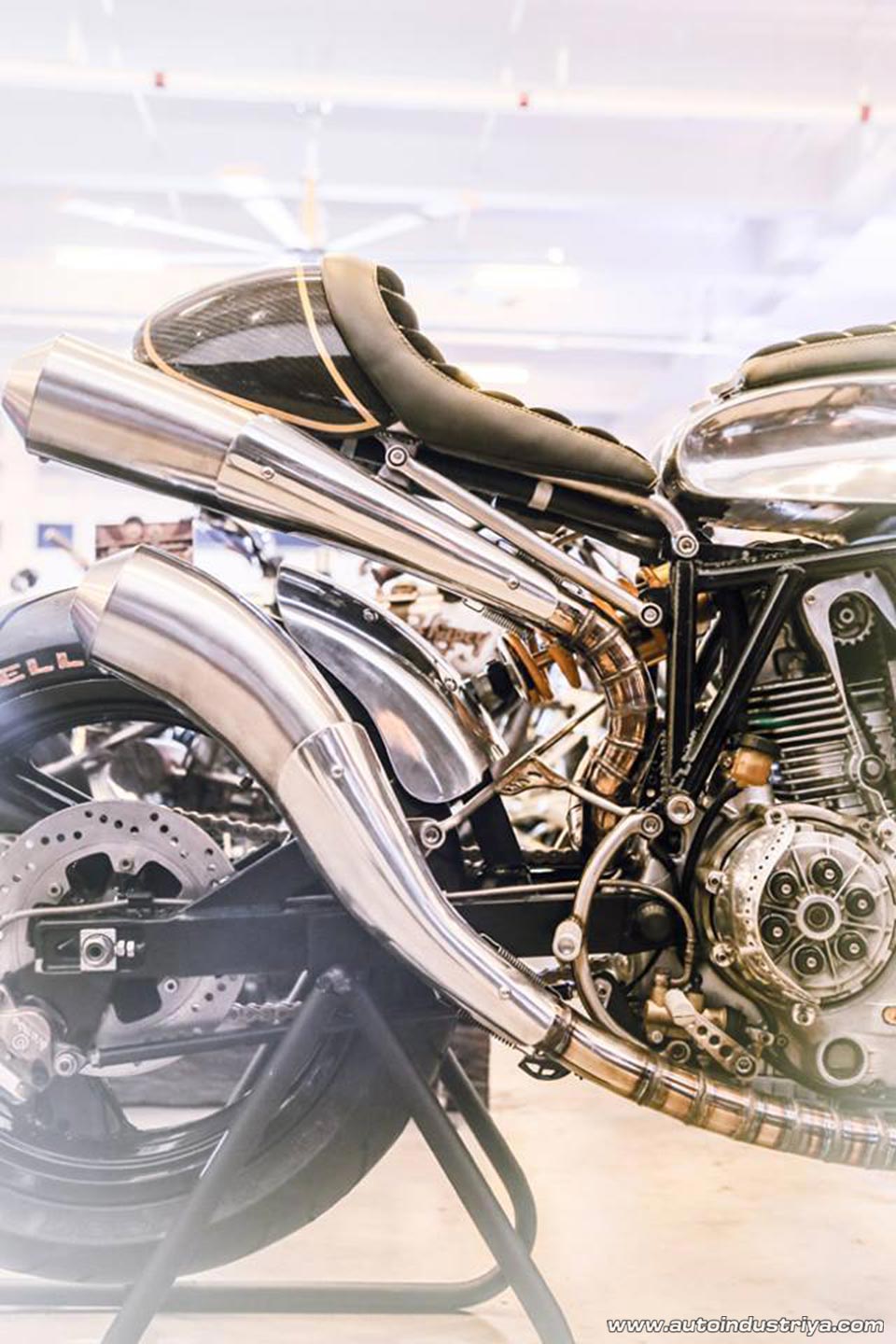 The rear frame was cut for a newly fabricated, more aggressive, stainless steel subframe. This entailed newly machined foot pegs, with new stainless steel brackets—further consolidating the overall elegance with additional curved lines. One’s derrière would sit on a genuine cowhide seat with an alcantara leather center—over originally molded carbon fiber parts. The same luxurious leather is carried over to the tank pad, which features a secret pocket for personal effects such as a wallet or phone. Custom-made, stainless steel clip-on handlebars steer the bike’s black front forks and the new headlight housing was hammered out of aluminum—integrating a British-inspired speedometer for space-saving cleanliness.

Overall, Velocita d’Epoca is stunning. The amount of detail is overwhelming, yet harmonious. The juxtaposition between vintage curves and opulent elements, set against raw, naked, modern machinery with tasteful carbon fiber makes for a retro futuristic match made in heaven. Even the decision to keep Ducati’s aluminum wheels instead of going for classic wire spokes was a conscious one to bring the message home. 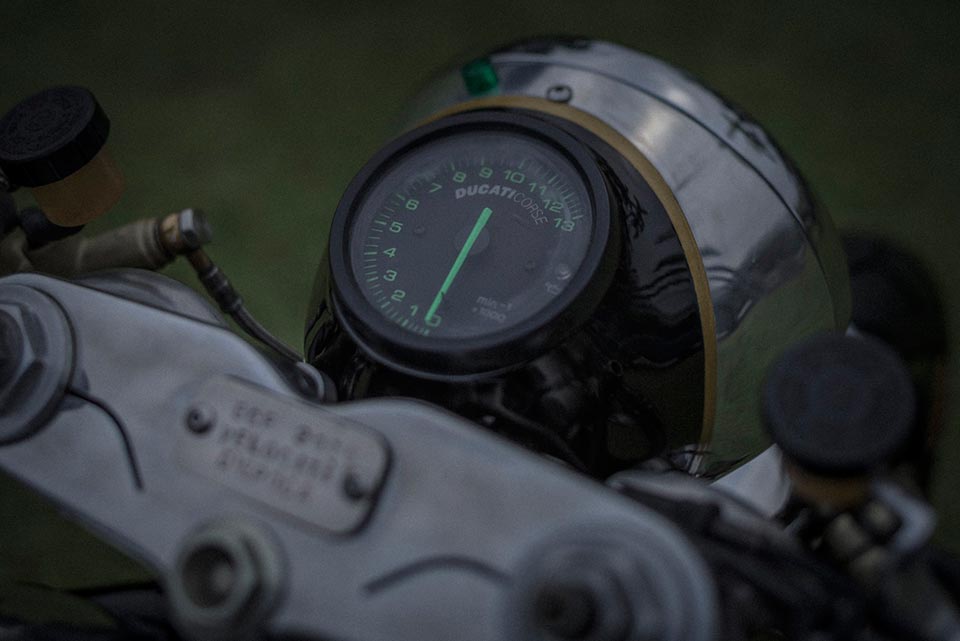 It was an amazing experience for all the show goers at Motobuilds Pilipinas 2016 where BCR’s beastly beauties took front and center, greeting all at the entrance. BCR did not join the competition and instead chose to display his bikes as a token of support for local builders, the show, and our growing custom motorcycle culture. If anything, the move was encouraging and inspiring—showing what can be done with years of skill honing, value for hard work, and the finding of one’s ‘voice’. For our country’s bikesmiths and motoring enthusiasts, there is a sense of pride knowing that Benjie is indeed one of ours.

H2O Technologies is starting a crowd-funding campaign for its Salamander