The Thailand International Motor Expo is not only for cars for but also for two-wheel enthusiats where top makers showcase their latest offering to the Thai and ASEAN market. The 34th edition was dominated by adventure and retro bikes which continues the trend from the recently held EICMA in Milan. 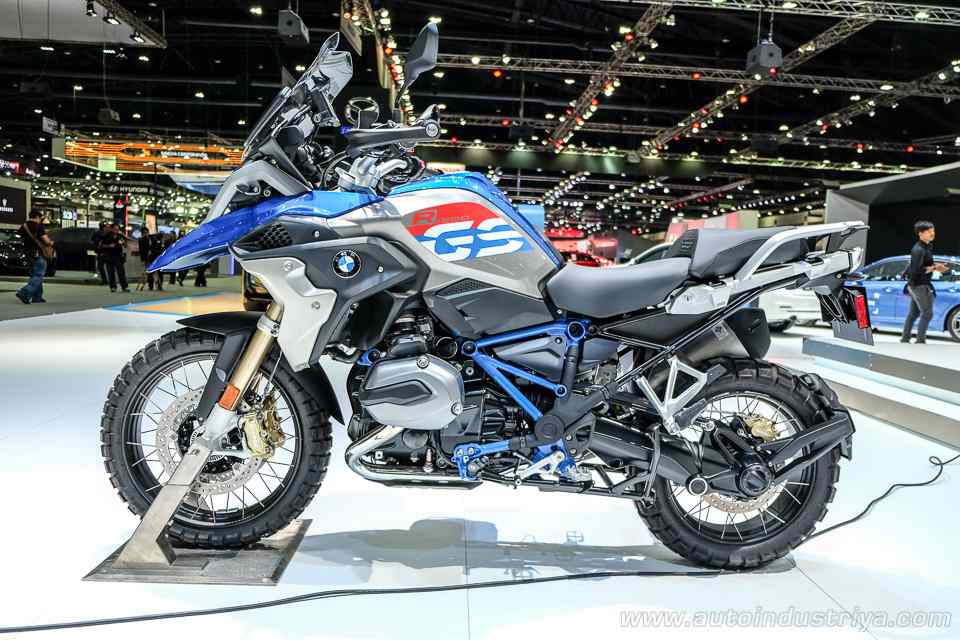 BMW Motorrad Thailand's booth made the GS its focal point, giving the highly advanced R 1200 GS Rallye its Thai debut at the expo. The latest addition to the best-selling GS line is also the sportiest — full of top-spec features for rugged performance and long-distance comfort. It’s powered by the R 1200 GS’ air and liquid-cooled 1,170cc boxer engine, but the Rallye version bumps up its off-road designation to lavish levels. The GS Rallye gets the additional “Riding Modes Pro” pack, which includes “Dynamic Pro” and “Enduro Pro” settings. The Dynamic ESA system electronically controls suspension and promises to impress with a luxurious ride over all sorts of terrain. Dynamic Traction Control (DTC) modulates acceleration, whereas Hill Start Control provides much-appreciated convenience on inclines. The Rallye edition comes with a sport windshield, cross-spoke wheels, and off-road tires. Its scheme combines Lupine Blue paint and a Cordoba Blue frame with BMW Motorsport graphics. 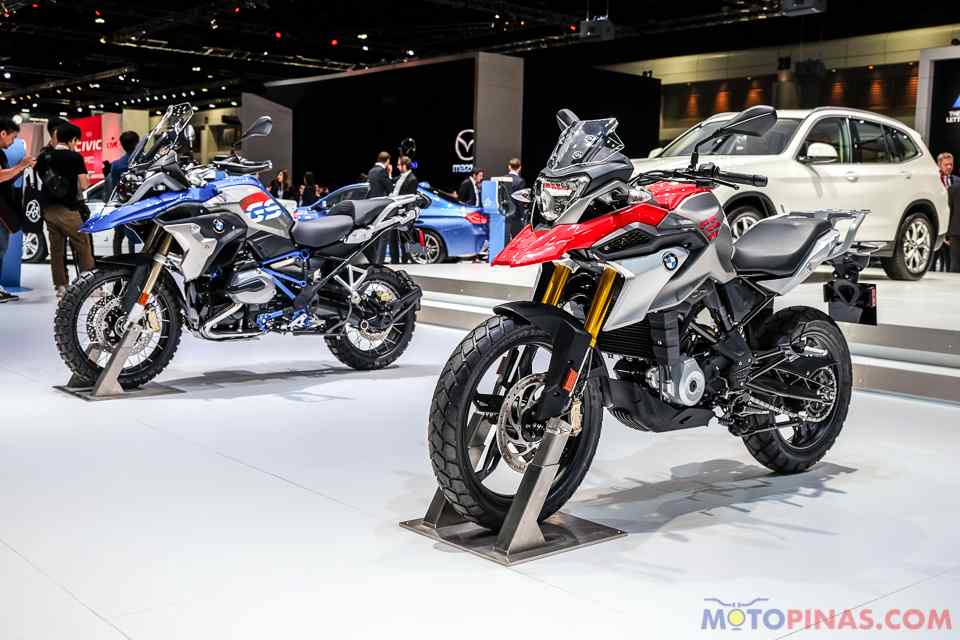 BMW Motorrad Thailand also put a spotlight on the recently launched G 310 GS, the baby adventure bike built around the brand’s G 310 R platform — with its liquid-cooled 313cc single-cylinder, tubular steel space frame, and standard ABS. Compared to its roadster sibling, the G 310 GS gets extended suspension travel and a 19-inch front wheel, together with enduro-inspired looks lifted from the larger GS motorcycles. 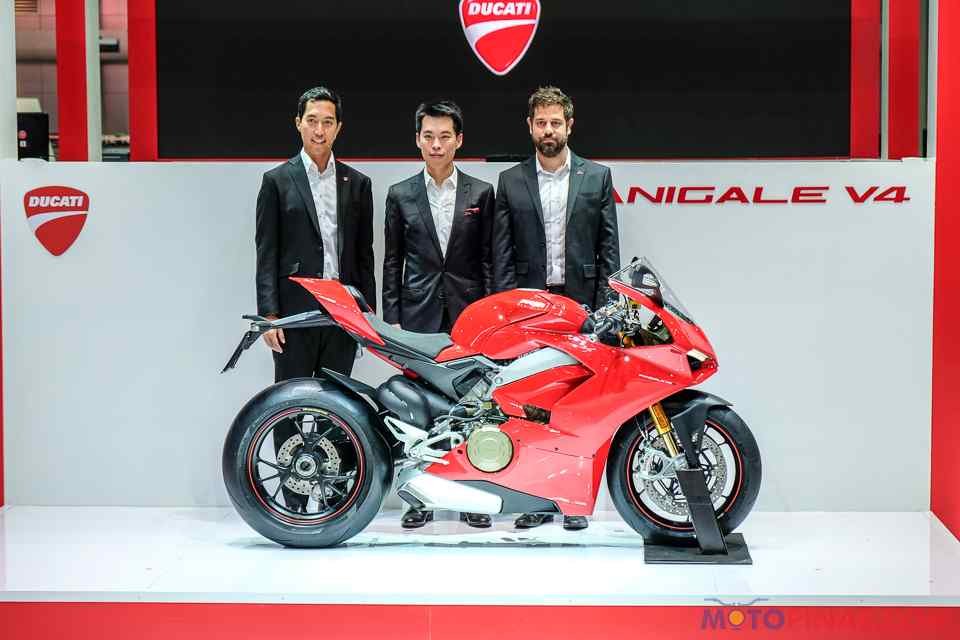 Ducati chose to highlight the new ultra-buzzworthy 2018 Panigale V4 at the show. The exciting superbike, which made its global debut at EICMA 2017, is fitted with the Italian manufacturer’s brand new Desmodici Stradale 90° V-4 engine — measuring at 1,103cc and derived from MotoGP technology. The motorcycle is now the most powerful in its class; power output is rated to make 214 PS at 13,000 rpm, with 120 Nm of torque at 8,750 to 12,250 rpm. Ride-by-wire helps reign in the V4 to meet Euro 4 regulations, and the high-tech bike comes with a ton of electronic rider aids with optional multimedia packages offered. Ducati’s hopeful entry into the World Superbike Championship comes in several trims for the riding public: the Panigale V4, the V4 S, and limited V4 Speciale. While the V4 gets Showa Big Piston 43 mm inverted front forks and a Sachs cantilevered shock, the V4 S uses semi-active electronic Öhlins suspension. The V4 S also receives weight savers like forged aluminum wheels, carbon fiber fenders, and a lithium-ion battery. Only 1,500 units of the highest-spec V4 Speciale will be available, weighing 10 kg lighter than the base V4 and bumping power to 226 PS thanks to a titanium exhaust. 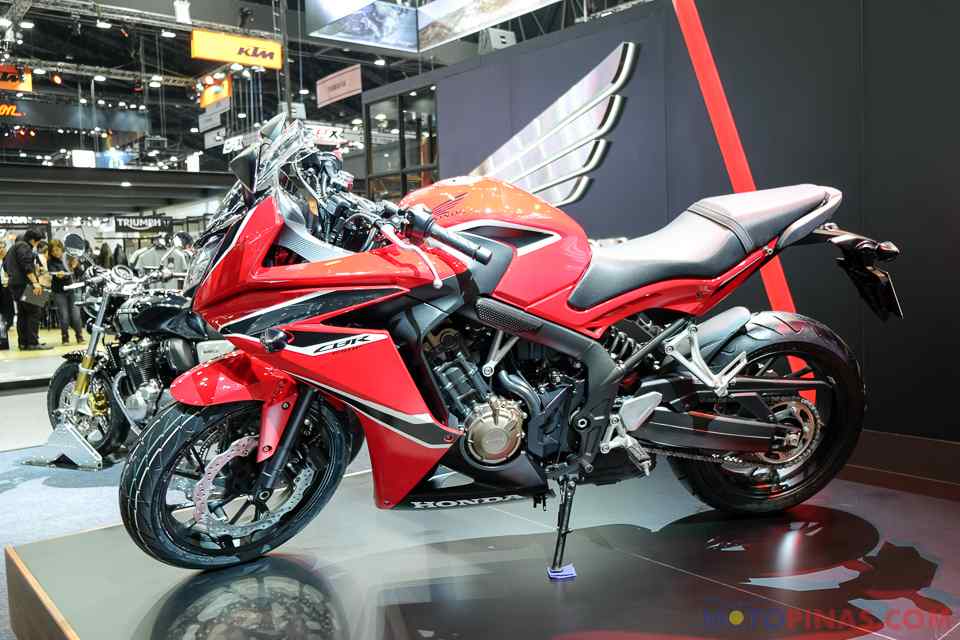 Honda highlighted their lineup with their new 650 Series in the form of the CBR650F and CB650F models. The 500 Series were also present as well the the Rebel 500. The Japanese bike maker also showed off its Dual Clutch Transmission technoogy in the Africa Twin, NC750X, NM4, CTX700 and Goldwing models. 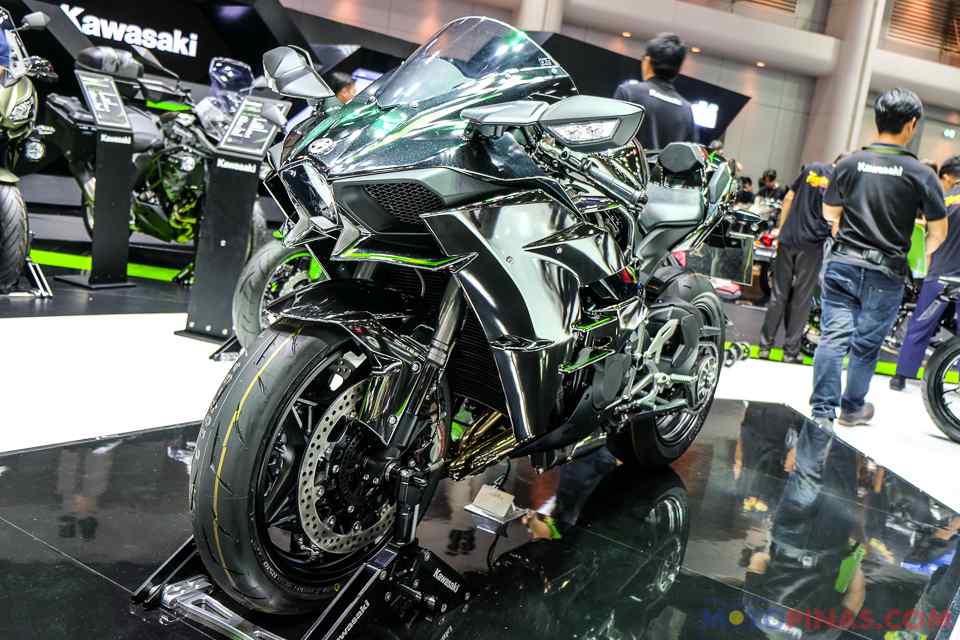 Kawasaki represented in full force with a slew of motorcycles, including the H2 — the superbike with a supercharged 998cc inline-four. The retro roadsters at the show were the small-displacement W250, the even smaller W175 SE, and the much-awaited Z900RS. The Z900RS is a throwback to ‘70s UJM styling and is powered by the well-reviewed 948cc inline-four off the Z900 streetfighter. The Japanese manufacturer also displayed the Ninja 400 — redesigned from the Ninja 300 to sport a bigger 399cc parallel twin, a better chassis, and upgraded features. 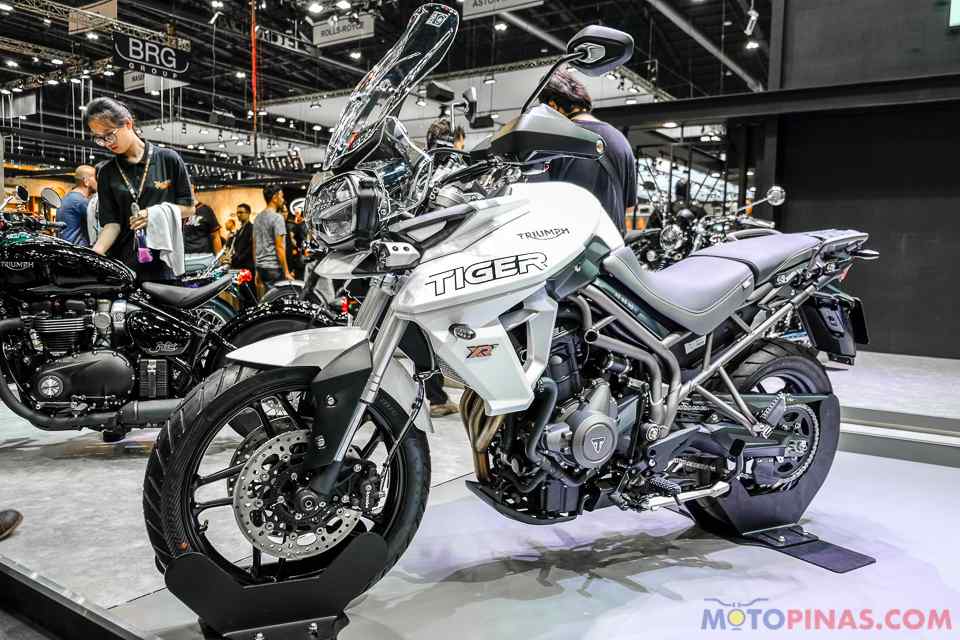 Triumph, meanwhile, showcased the higher-spec XCA and XRT models from the new Tiger 800 range. The 2018 line of 800cc inline-three adventure bikes recently got more than 200 upgrades. The Tiger 800 XC is designated for off-road, while the XR refers to the road-focused version. The Tiger 800 XCA receives extra touring features like full LED illumination, extra display styles, a programmable riding mode, and heated grips and seats. The Tiger 800 XRT is the range topper of the asphalt tourers — sharing additional goodies with the XCA, and more including adjustable Showa suspension for the front and rear. 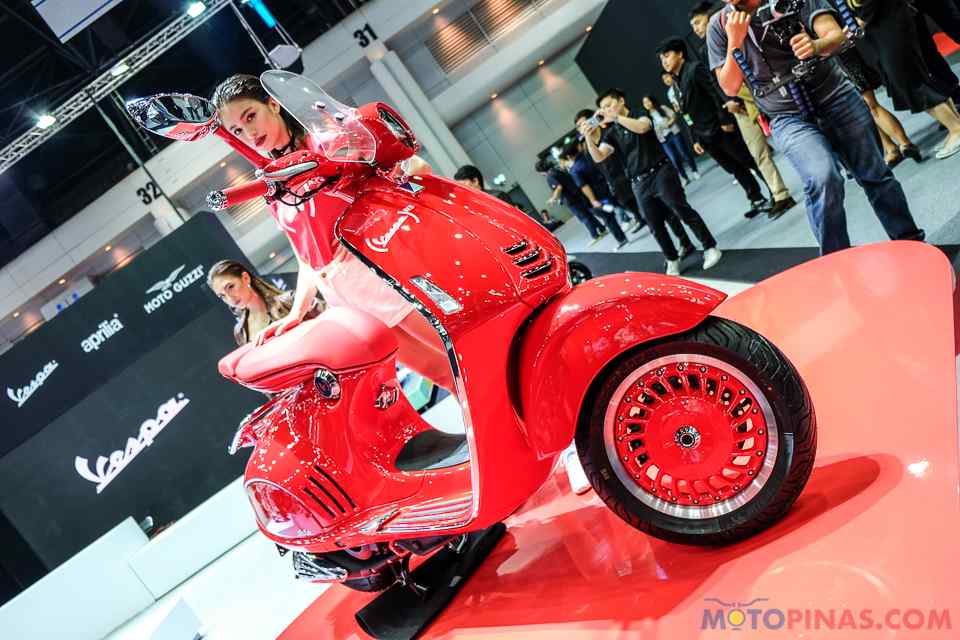 Vespa directed all eyes to the brightly colored 946 RED. The scooter is a collaboration between Piaggio and the (RED) organization, which partners with iconic brands for products that contribute profits to the Global Fund. The charity fights against AIDS and other serious diseases in the African continent. In line with the organization’s namesake and design philosophy, the 946 RED comes in a distinct all-red scheme that encompasses the body, seat, wheels, and headlamp housing. Even the handlebars and side mirror stems are red. Part of the proceeds from every 946 RED sold is pledged to (RED) and the Global Fund.

Part of Vespario distributor group, the Moto Guzzi brand was highlighted by the V7 II Stone Custom Concepts in Scrambler and Tracker forms. 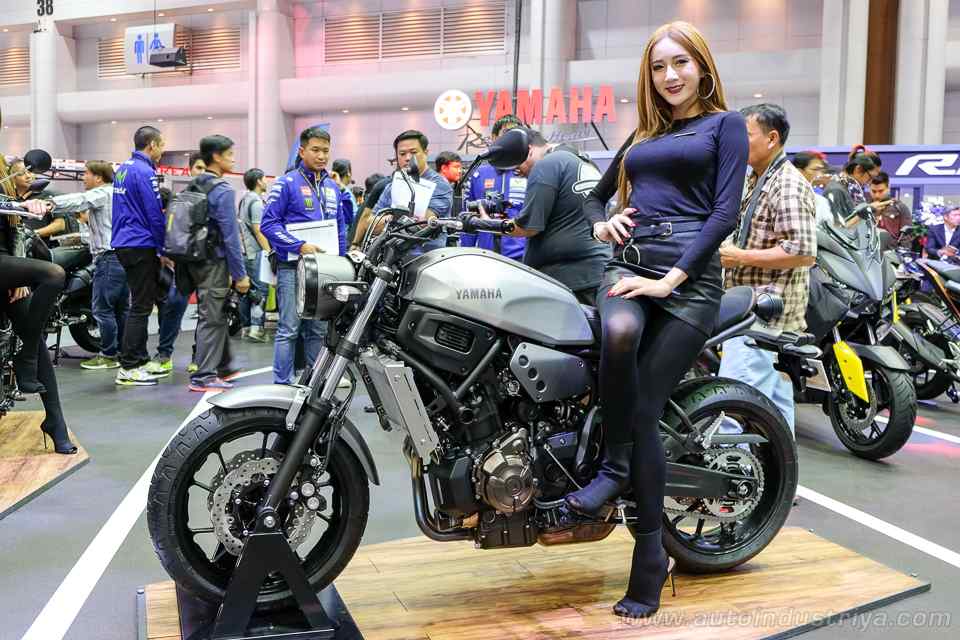 Yamaha put the brand's Sport Heritage line front and center with the local launch of the 2018 XSR700. The retro naked is based on the well-reviewed MT-07 (FZ-07 in other markets) and was initially exported to European markets when it was first released. The 2018 XSR700 has joined its bigger sibling, the XSR900, in a much-awaited global rollout. Powered by a 689cc in-line parallel twin engine, the motorcycle features styling that takes inspiration from classic UJMs (Universal Japanese Motorcycles) while showcasing Yamaha’s signature raw, angular tech look. The 2018 model wears Pirelli Phantom Sportcomp tires and increases customizability with a removable subframe. Differences from the MT-07 include a more upright riding position, more metal components than plastic, and and a higher seat height of 835.7 mm (32.9 in) due to upgraded suspension.

The 34th Thailand International Motor Expo 2017 has been ongoing since November 29 and will continue up to December 11 at IMPACT Challenger Halls 1-3, Muang Thong Thani in Pak Kret, Thailand. Thunder in the Heritage City

Our rider, Brando, heads to north to experience the Heritage City of Vigan in the company of hundreds of other riders for the Ilocos Sur Invitational Ride.

Lane-splitting is actually illegal in the Philippines

Motorcycle riders in the Philippines break more laws than we realize. Many of them are laws as far back as 1987.