Spirits are still high, reeling from the past weekend’s Moto Builds Pilipinas show, presented by Makina and AUB alongside the new Big Bike Expo. While guests ooh’d and aah’d over custom motorcycles from the country’s best garages, the most hype was for the main event: the Battle of the Champs. 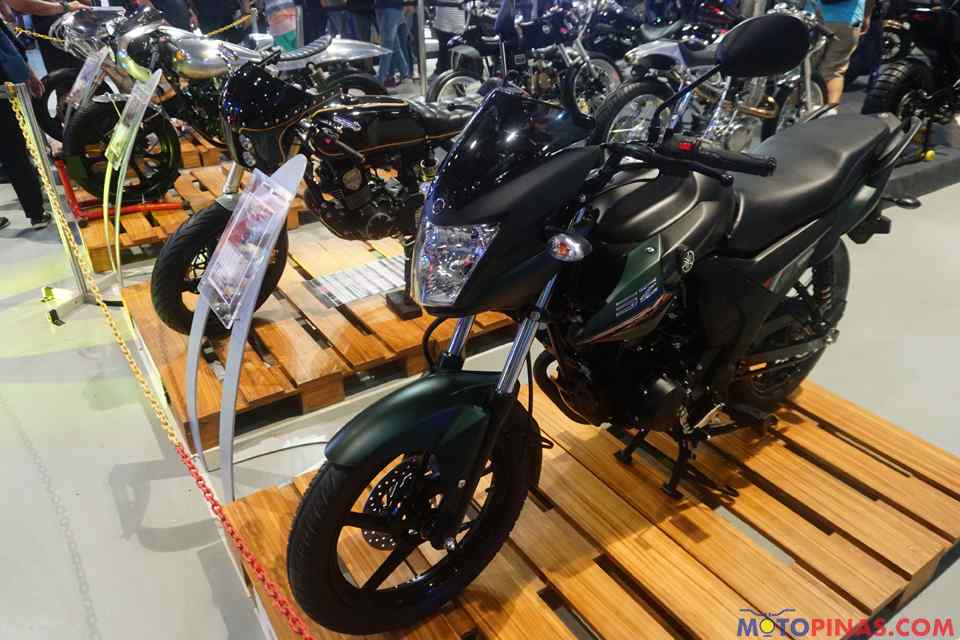 For Moto Builds Pilipinas' fourth year as the Philippines’ premier custom bike show, the unique competition took the past three winners of the previous Biker Buildoffs and tasked them with creating café racers out of identical 153 cc SZ16s donated by Yamaha. The contestants judged each other beside Yamaha Philippines’ Events Manager, Jariel Aytona.

Scroll down to learn about the winning build! First, here were the other two entries… 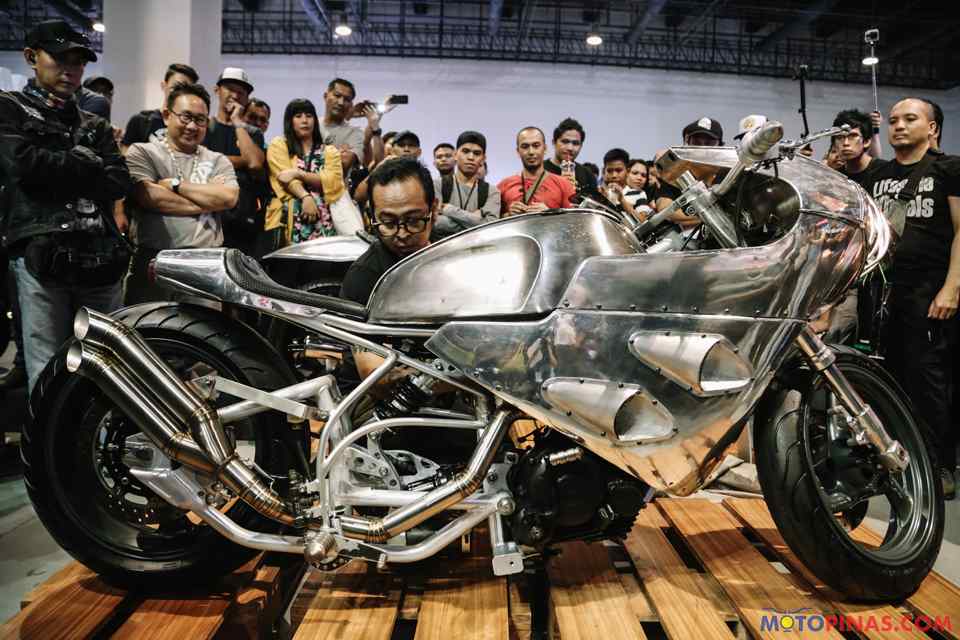 The 2017 Biker Buildoff winner, Jorge Jacinto from Garage Monkey Kustoms, went full-on crazy with his own idea of a café racer concept by unveiling a creation he calls “The Aluminatti”… This low-slung metallic sculpture features sprint-friendly proportions with exquisite aluminum bodywork that integrates an intake-laden, endurance-style half fairing and caged twin headlamps against sweeping subframe lines. 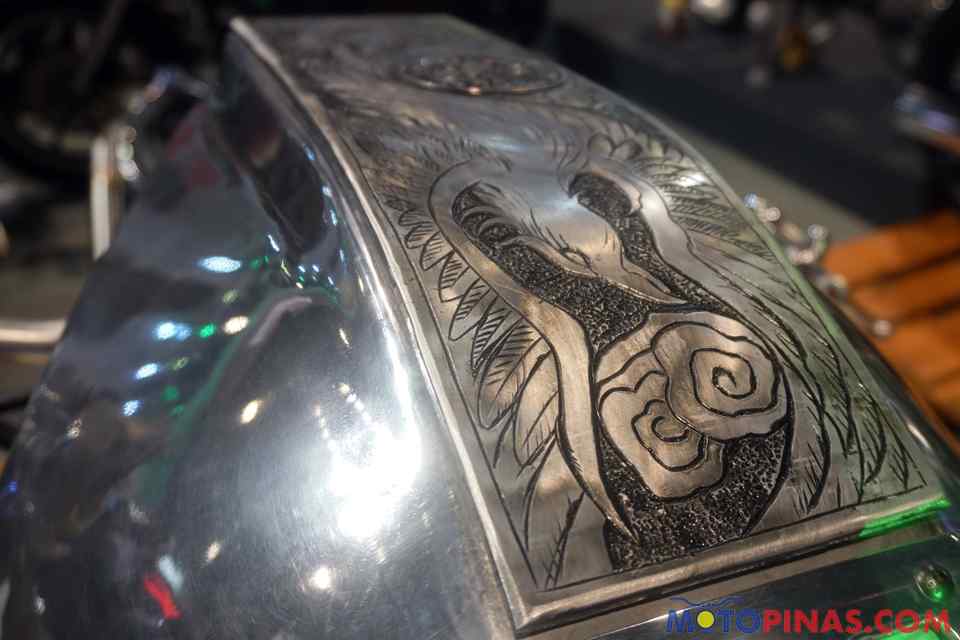 Inspired by the old automobiles of the past, Jorge said the work was done either in-house out of his shop in Cainta or at Wild Custom in Las Piñas, where he studied how to shape and weld aluminum under his mentor Alfredo Aranda. The elaborate engraving that runs through the length of the bike combines koi, dragon, and phoenix motifs to push the oriental scheme. The only part of the stock frame that was retained holds the engine in place. Jorge didn't stop with just looks, going on to change the way the bike works as a whole.

The Aluminatti uses inverted front forks with greater rake for a stretched profile — while creative engineering is manifested in the exposed chain routing and the suspension. The rear mono shock is connected to a switch-actived hydraulic system Jorge retrofitted from a Japanese industrial press. It allows the motorcycle to adjust its own geometry on the fly. The rider can choose between a lifted position, more suitable for normal riding conditions... And a lower setting that drops the bike to either enter attack mode on the strip, or to sit pretty while parked. The curious attraction was demonstrated at the show in front of a live audience. 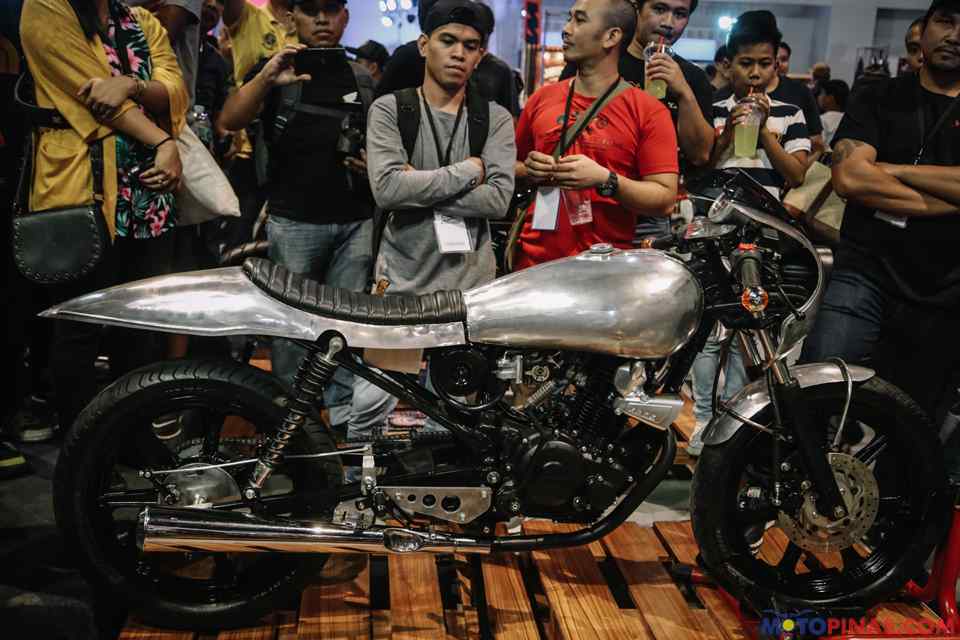 The Biker Buildoff winner from the very first Moto Builds Pilipinas show back in 2015 was Todee Teodoro of Kratos Custom Cycles. He considers his entry for this competition as his first all-aluminum build. Regarding the material, Todee considers aluminum “easier to shape, harder to perfect.” His interpretation of the café racer theme focused predominantly on lightweight, artistically expressive bodywork — choosing to keep majority of the components from the donor bike in order for its essence to largely remain. Even the beautiful bikini fairing uses the original SZ windscreen. His distinct spin features an elongated tail and streamlined profile. 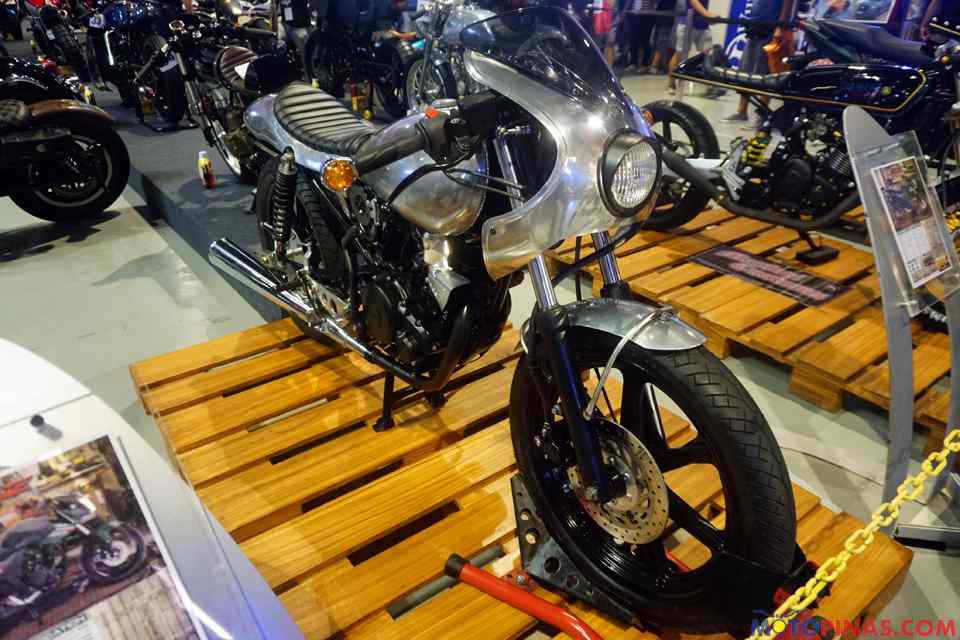 Todee was inspired by his newborn son. As a first-time father, he was motivated to finish working on the bike quickly out of his Makati workshop in order to be with his family in Parañaque. Instead of being constantly bent over the build, Todee was able to hammer away for only a few hours a day.

A mainstay since the beginning, and arguably one of the biggest game changers for the nation’s custom renaissance, Todee is proud to be a part of Moto Builds Pilipinas. He extends his appreciation for the show, citing it as a driving cause behind local garages stepping up their quality.

His special thanks go out to his family and friends — especially Noel Marfori and Jerry Formoso, etc. who came over and helped him with sanding close to the deadline. He is especially grateful to his machinist, Armand Soriano, and shop assistant, Ariel Claro. 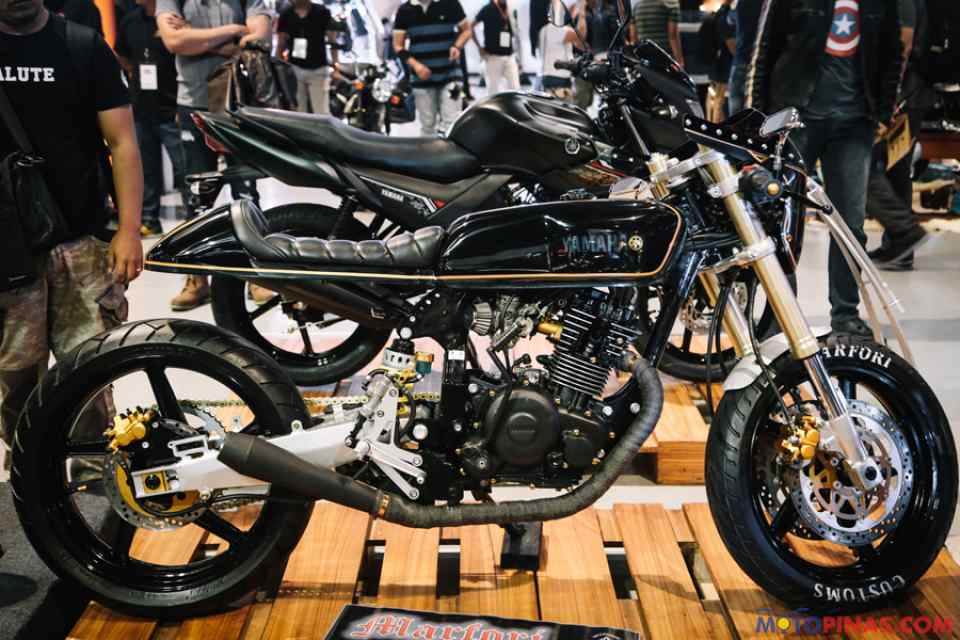 The ultimate winner of the 2018 Battle of the Champs was announced as Biñan-based Noel Marfori of Marfori Customs. The 2016 Biker Buildoff winner, and now the king of champions, entered a painstakingly complete café racer package effectively fusing retro beauty with modern performance. A self-proclaimed cruiser guy, Noel had to do a lot of research into what made café racers tick. The studying and reading paid off, leading to the development of the bike Noel named "Chaz". Not only is the build sleek and sexy, but it's also packed with upgrades — alluding to the motorsport-minded philosophy of street tuning as an integral step after the initial less-is-more paring down. Noel wants to share everything he learned by allowing the bike to serve as a basic guide for small-displacement riders who want to develop café racers of their own. 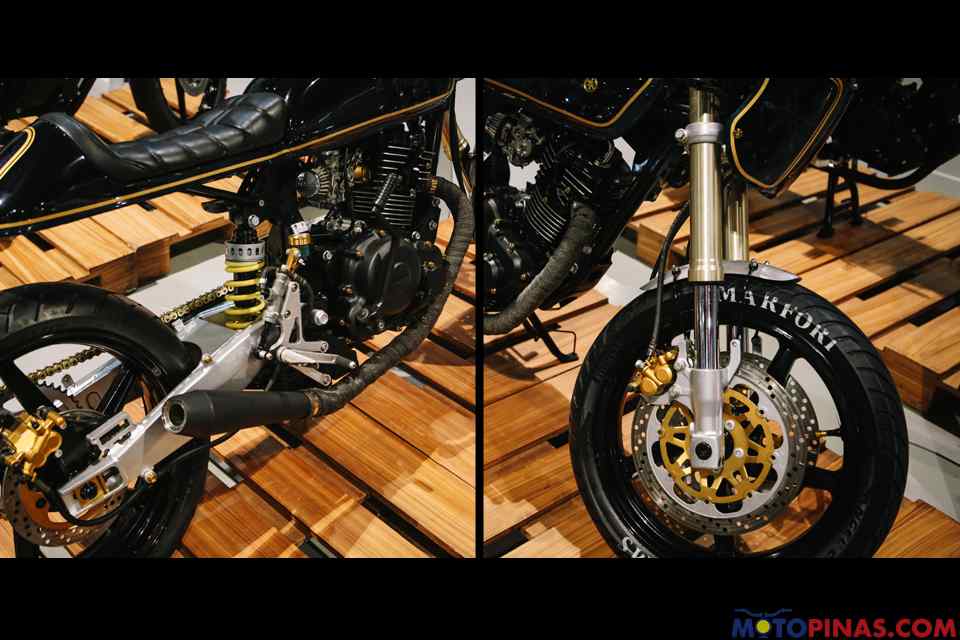 Instead of keeping the SZ’s parts, Noel took the Frankenstein route by using components off a wrecked Kawasaki Ninja including the swingarm, inverted forks, and better brakes. Additional to the improved handling ergonomics, the engine also now breathes better thanks to a port and polish job for higher RPMs, as well as carburetor jet enlargement and a revised air intake. He also went for a 520 chain conversion. Suffice it to say, these decisions will crack smiles from café racer aficionados. Noel inteded for the bike to be usable in everyday situations. It has been said that the best customs are the ones that people feel the strong urge to try and ride. Overheard at the show were visitors expressing the exact desire, so Noel definitely succeeded in that regard. 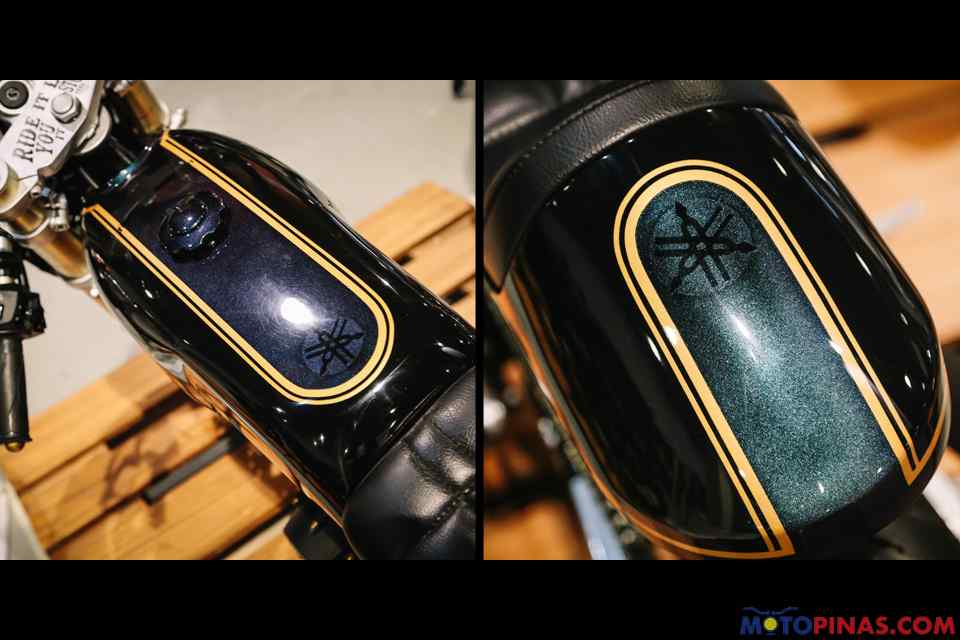 Noel finished the project with a paint scheme using 5 colors, eye-catching metallic glitter, and gold pinstriping. This was no surprise, since paint is one of his specialties. Noel gives special thanks to Philippine custom houses Kratos Custom Cycles and Benjie’s Cafe Racer for helping familiarize the local scene with the possibilities of the café racer format. He also credits Classic Motorworks with assisting him with research and suggestions, and gives special mention to his shop partner PJ Arevalo. 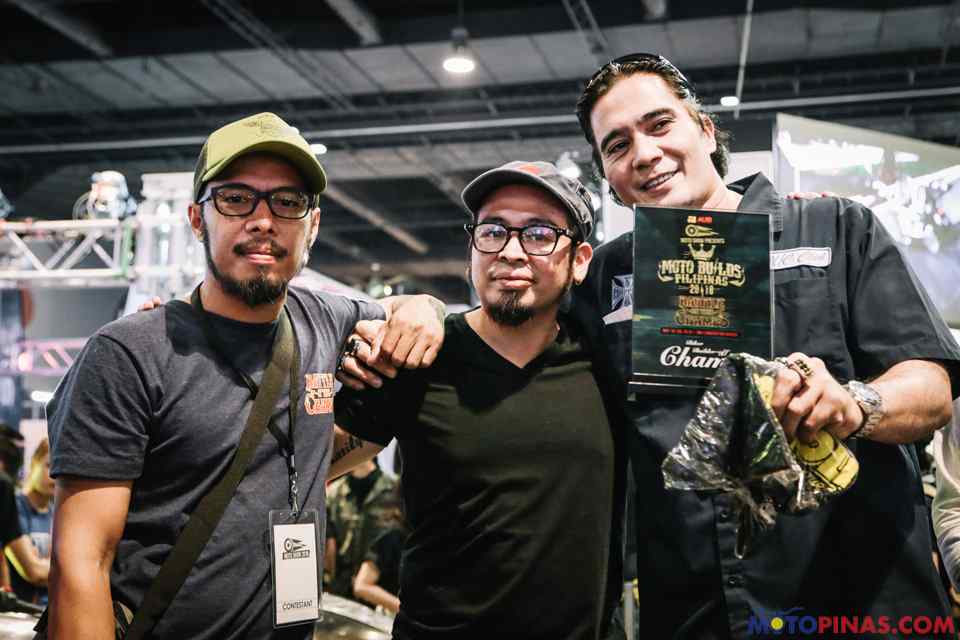 Congratulations to Todee Teodoro, Jorge Jacinto, and the ultimate winner Noel Marfori for their amazing motorcycles that all gave justice to the Battle of the Champs!

The 2018 Moto Builds Pilipinas show and the Big Bike Expo were held from May 19 to 20 at the SMX Convention Center in Pasay City.

We head to the country's surfing capital, not to surf, but to experience the burgeoning custom bike culture. Texas-based Filipino photographer, Joachim Rayos, takes us through the Handbuilt Motorcycle Show, staged during the 2018 MotoGP weekend at the Circuit of the Americas in Austin, Texas.