No doubt many have already heard of Siargao, the surfing capital of the Philippines. The teardrop shaped island in the southeast of the country just north of Surigao province, has long attracted the world’s top surfers and hosted international surfing competitions because of the near perfect barrel breaks found in its most famous surf spot, Cloud 9. 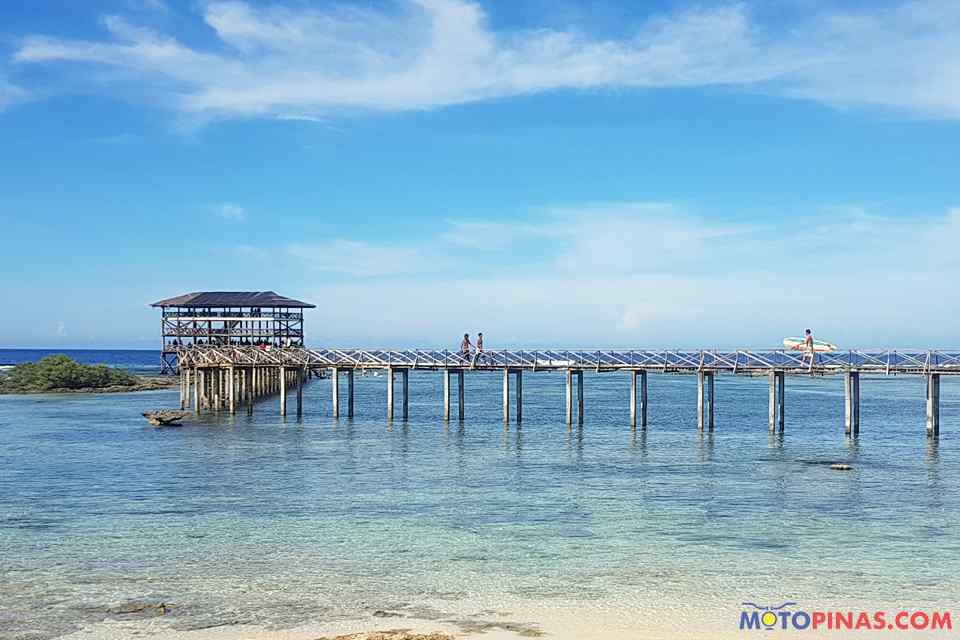 Of late, the island has risen in popularity, largely thanks to last year’s hit film, Siargao, starring actor and surfer, Jericho Rosales. The film not only introduces viewers to Siargao’s scenic beaches, breathtaking waves, and infectious culture, it also shows a glimpse of the island’s burgeoning moto culture. 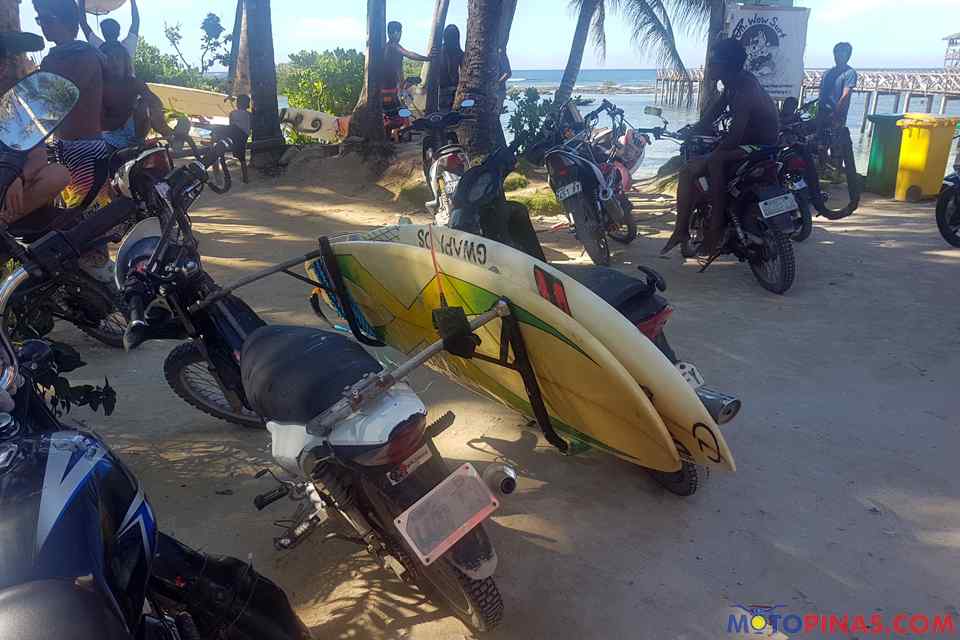 It should come as no surprise as surf culture has fueled the rise of one of the most popular custom motorcycle styling trends today: the beach scrambler. First popularized by motorcycle customizers, now big name brands like BMW, Ducati, and Triumph are releasing brand new models bearing the design aesthetic. 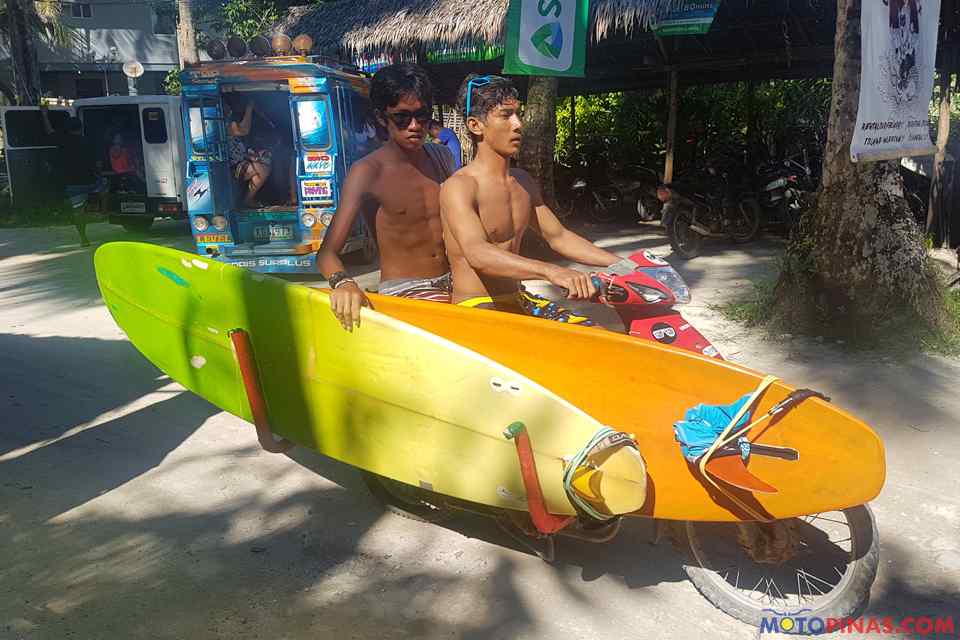 In Siargao, motorcycles were originally the most efficient and convenient means of getting around. They’re also favored by tourists as affordable and easy transport for rent. So while many come for the surfing, some for the food, those that prefer to get their adrenaline pumping with two wheels over surf boards can still come over and enjoy much of what the island has to offer.

I’ve been coming to Siargao since 2007 to visit my best friend who has decided to move and settle here. Admittedly, surfing is not exactly my cup of tea, but thankfully, this new alternative is burgeoning in the island. 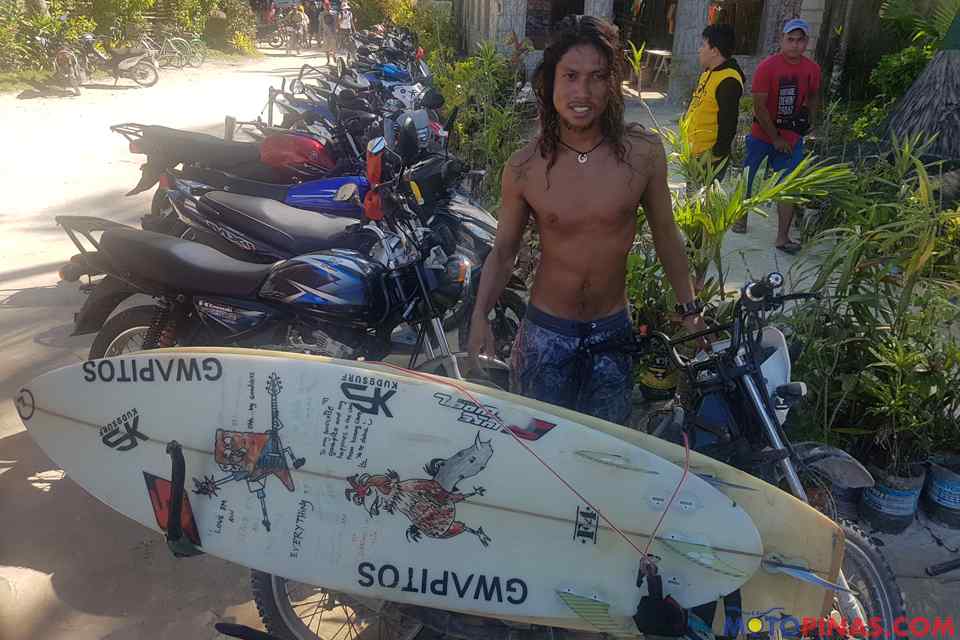 Back in 2007, the choices for motorcycle rental were mainly Honda XRM’s or their Kymco equivalent. And while there’s no doubting these bikes’ capability in rugged terrain, their styling and fun factor left much to be desired. 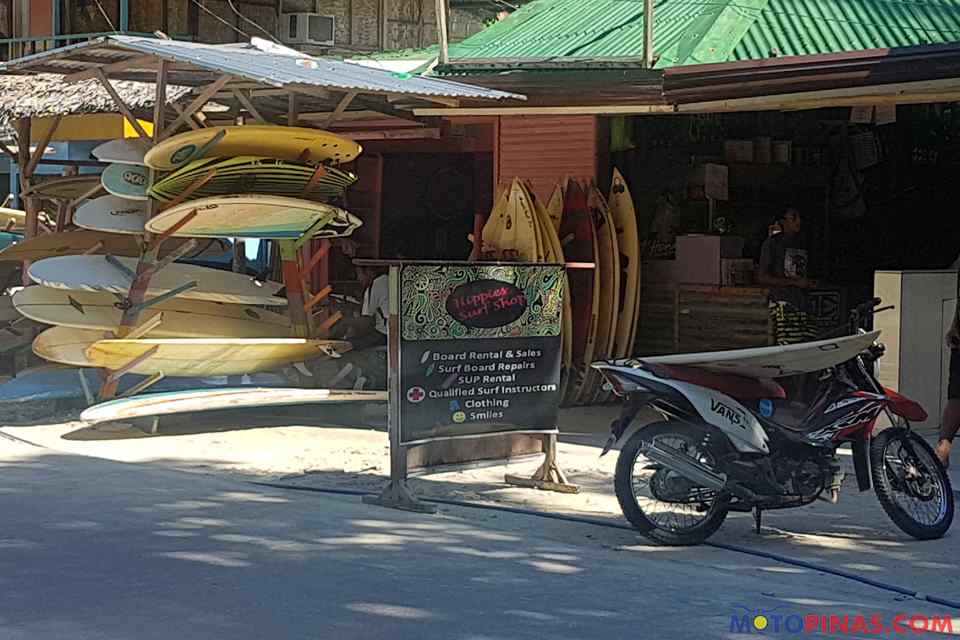 These days, there’s a broader assortment of bikes available for rent, ranging from Honda XR200’s to Yamaha Mio scooters hawked by practically every establishment on Tourism Road in the town of General Luna. 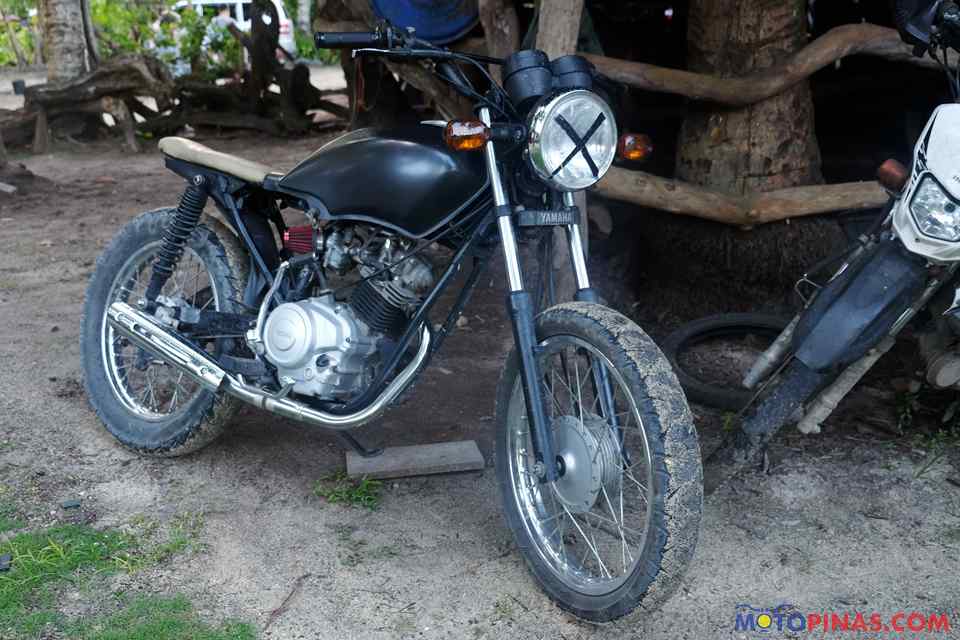 Even those owned by residents are quite the visual treat, with several custom yet practical conversions of your typical underbone and enduro bikes, clearly living up to their full potential as beach scramblers. 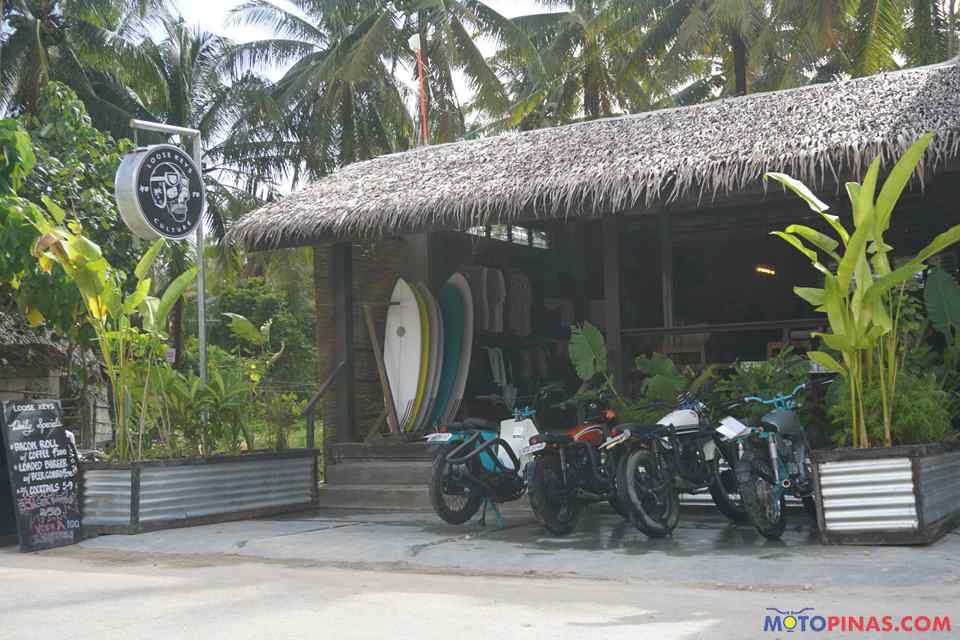 As I was browsing which means of conveyance to rent for this trip, one shining mecca quickly stood out: Loose Keys Moto Culture bar. Far from the usual surf café, restaurant or hostel, Loose Keys prides itself in its unapologetically motorcycle oriented theme. 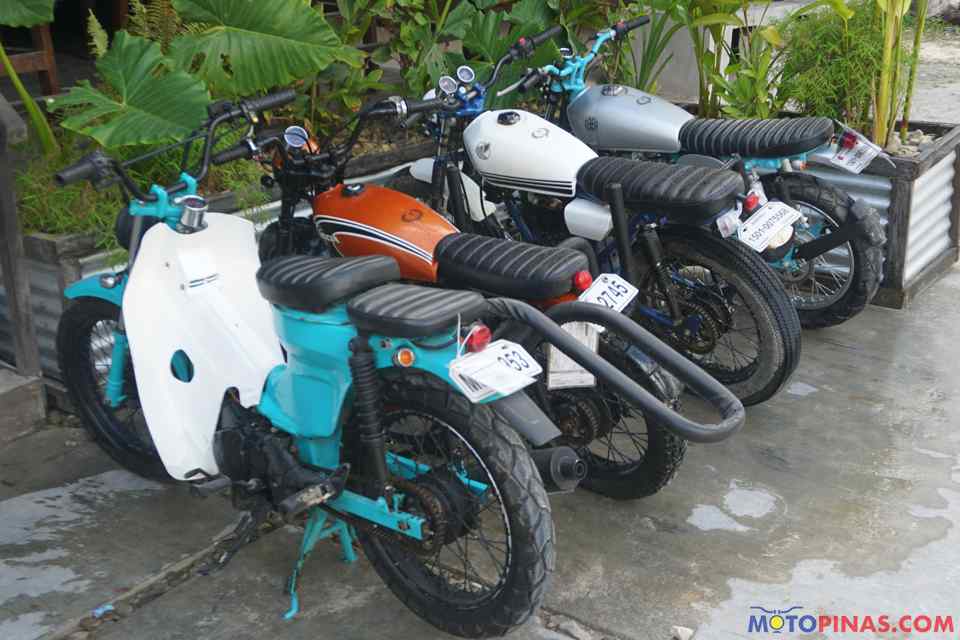 Its façade is dominated by custom scrambler versions of bikes like the XR150, TMX 125 and even a Honda Cub. Among them is the very same custom black XR150 used by Jericho Rosales in film. Many of the bikes have the trademark hooks for mounting and transporting surfboards. Each one can be rented for a day or longer.

Like its neighbors, it also offers surfboards for rent. Closer to the counter is a rack selling carefully curated apparel. 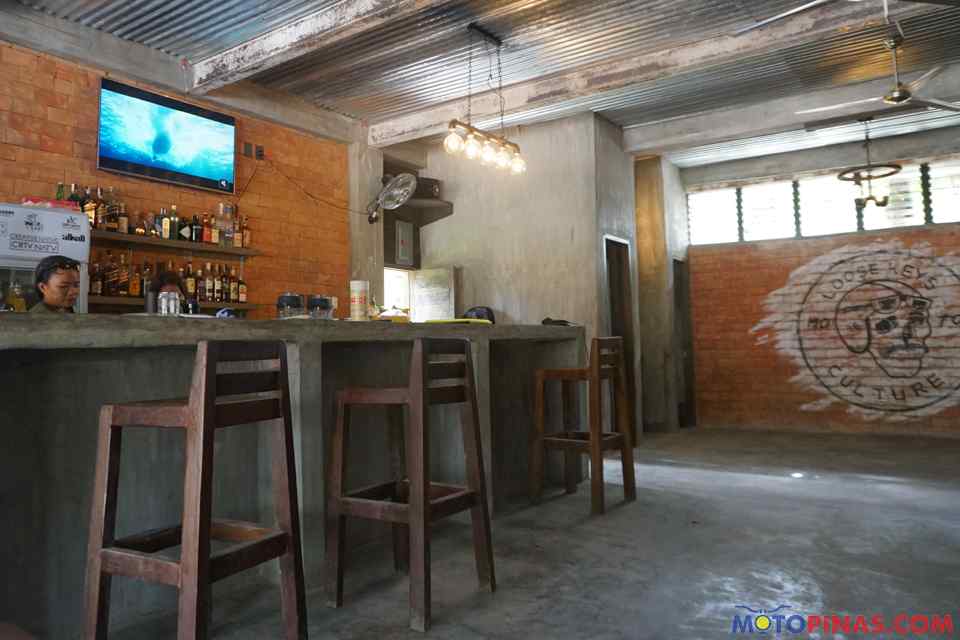 There’s only a couple of tables, seats at the bar. and broad open spaces for its frequently packed weeknights with live bands.

Loose Keys’ selection of custom motorcycles for rent is a welcome breath of fresh air in the island. Each one was conceptualized and created by 3B Customs of Surigao City, run by one of the country’s top bike craftsmen, Benjo Sun.

3B Customs ought to ring a few bells as it joined the Moto Builds Pilipinas competition last year with a very unique hubless chopper built from a Yamaha SZR. As you can imagine, creating a hubless bike is no easy feat as typical components like sprockets, chains, brakes and suspension have to be reengineered to create that unique look.

Though not as outrageous as the chopper, Benjo’s creations for Loose Keys are nonetheless eye-catching, sleek and perfectly imbibe the scrambler style aesthetic and function. 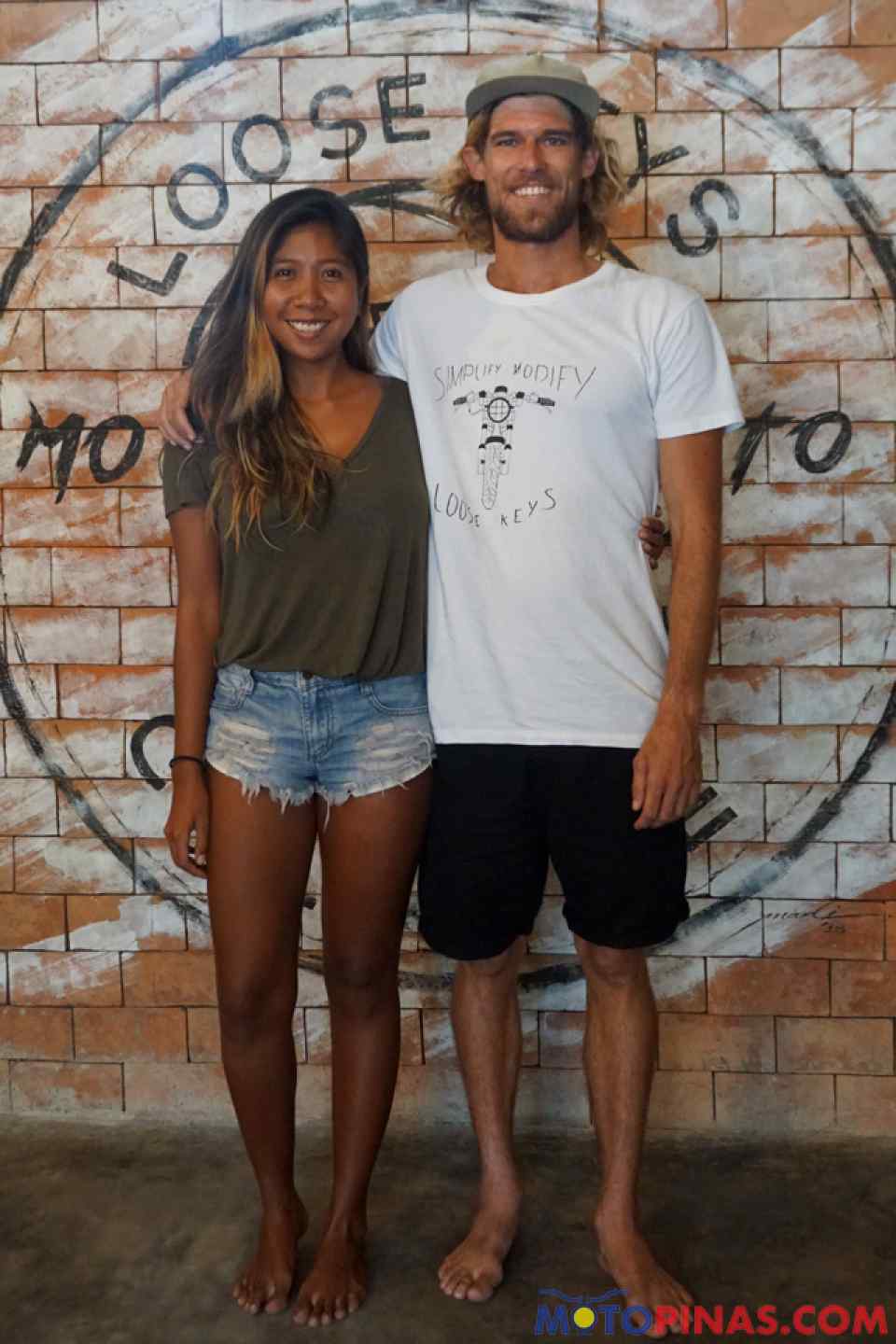 Mia del Mundo is the proprietor of Loose Keys, though she admits that the idea for the motorcycle café came from partner Daniel Fitzpatrick.

“Originally, this was supposed to be a motorbike rental place. The bar and everything was after. We sat down and said why don’t we set up a lifestyle brand plus turn this into a bit of a bar and café. Originally I wanted enough space so someone can tinker with the bike up front, which is very big in Australia and someone can sit in here and have a cappuccino,” said Daniel. 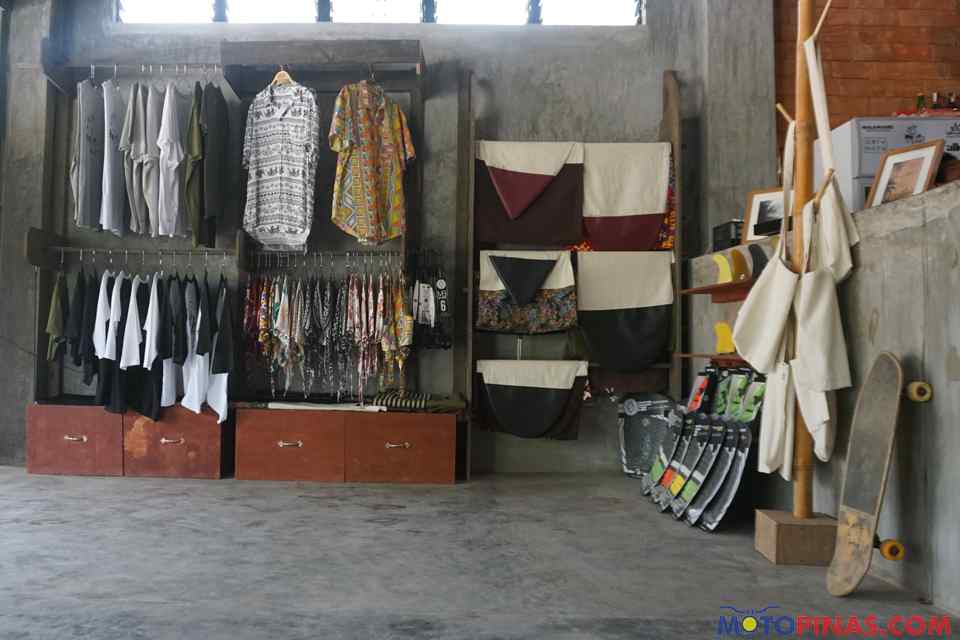 “I was based in Manila as a fashion designer and stylist for ABS-CBN teleseryes. I was working here in Siargao, and me and Dan met and wanted to do this together. Now we are settled here permanently,” shares Mia.

“We want it to revolve around motorbikes. Surfing is always gonna be a part of it. But if you like extreme sports, like motorbikes, skateboarding, it doesn’t matter where you come from, everyone can mingle here.” 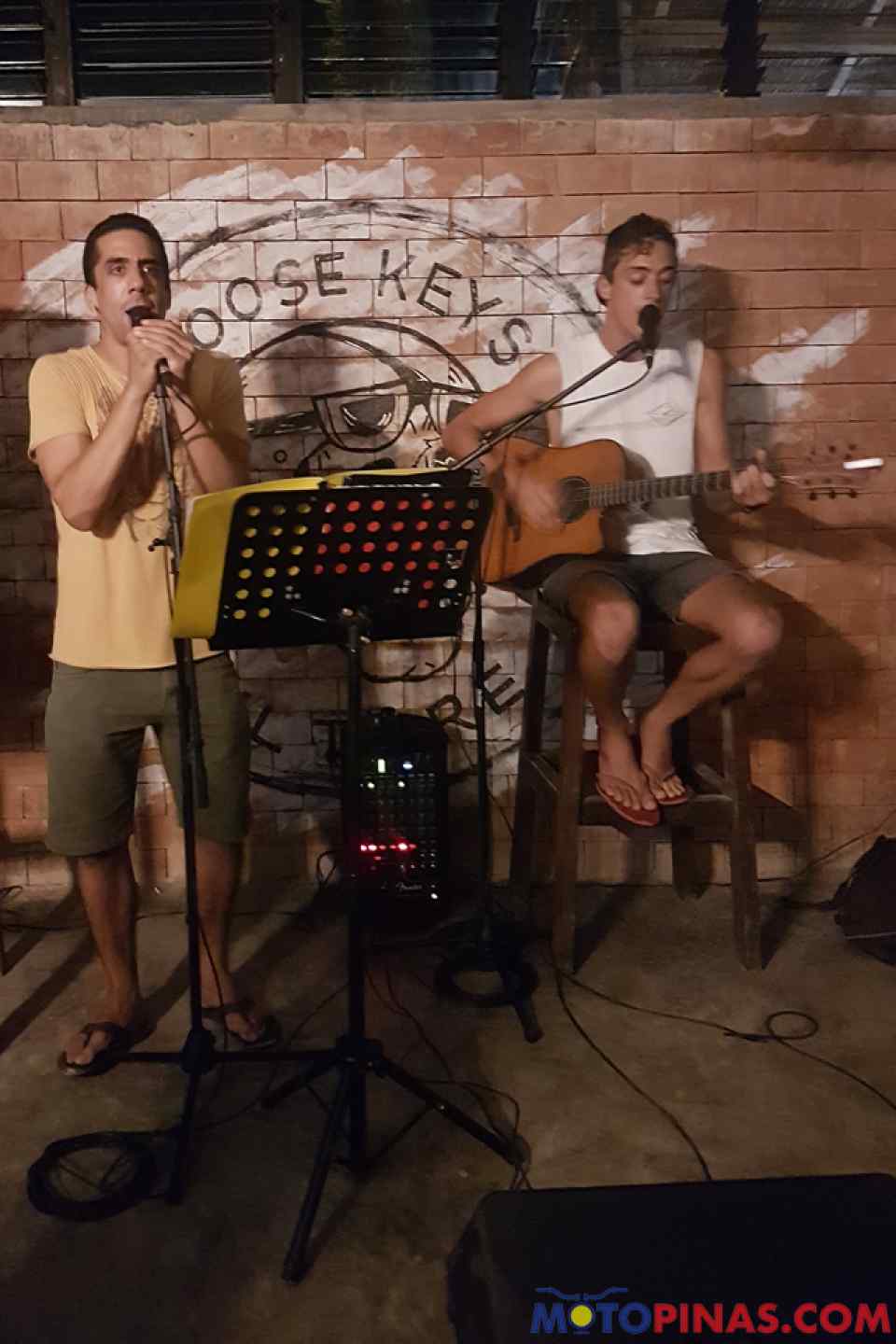 That friendly and open vibe is evident the moment you walk into the bar, greeted by the accommodating staff and start up a conversation with any of the locals. For those looking to make new friends in the island, be sure to drop by the place on a week night when there’s a band playing and you’re sure to come away with a few new friends. 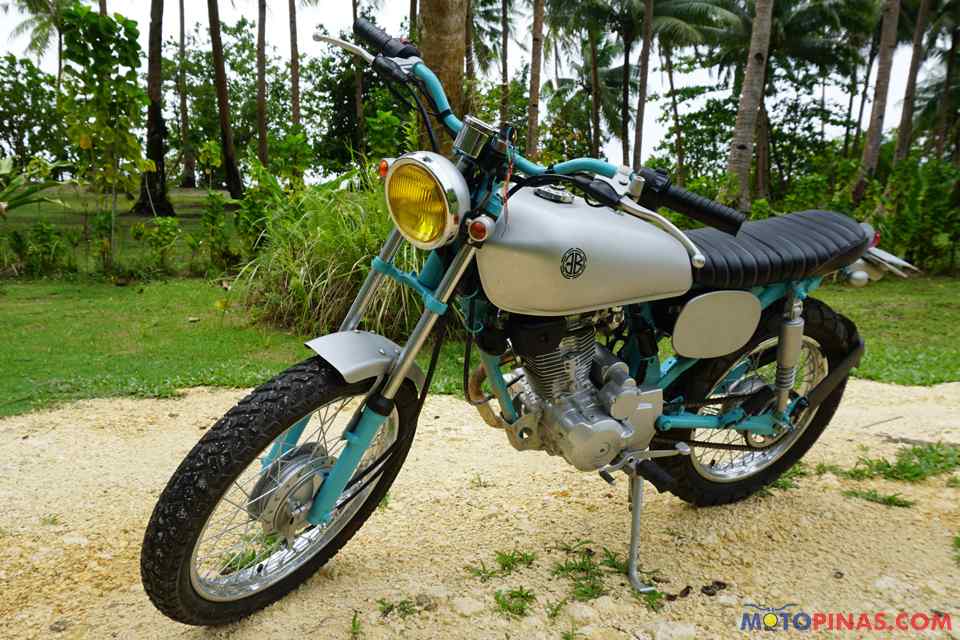 Socials aside, the custom bikes for rent are easily the best and most Instagram-worthy way of getting around the island, particularly for those who regularly ride. 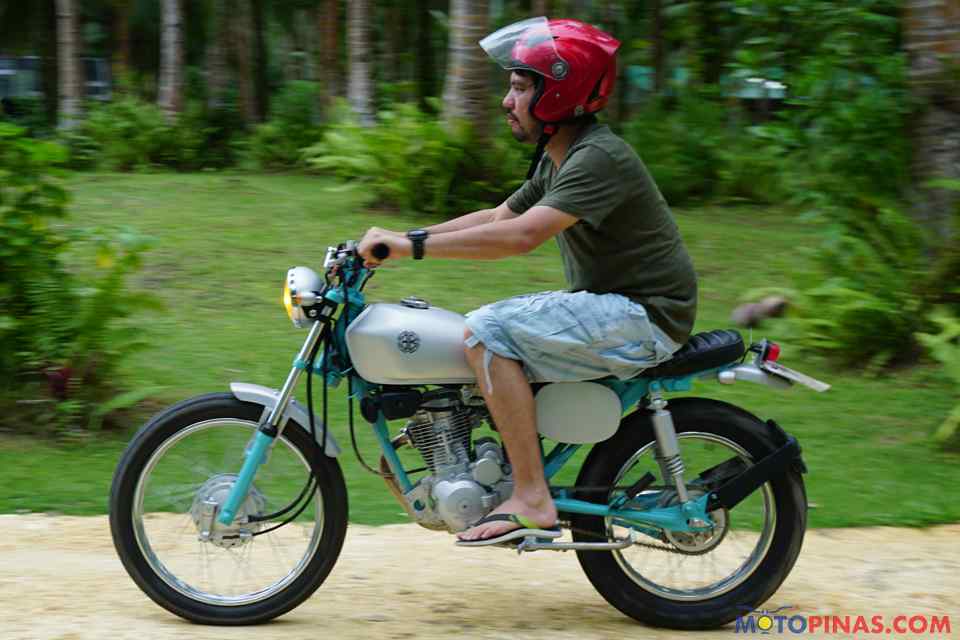 I chose to rent their custom TMX 125, without the surfboard hooks, to tour around the island. The 125cc four-speed squid was easy enough to take around the island, thanks to its lighter weight, robust engine, and comfortable ride. Naturally it didn’t have much to offer in the way of speed or handling, yet in a laid back and beautiful island like Siargao, why would you want the scenery to whiz by? 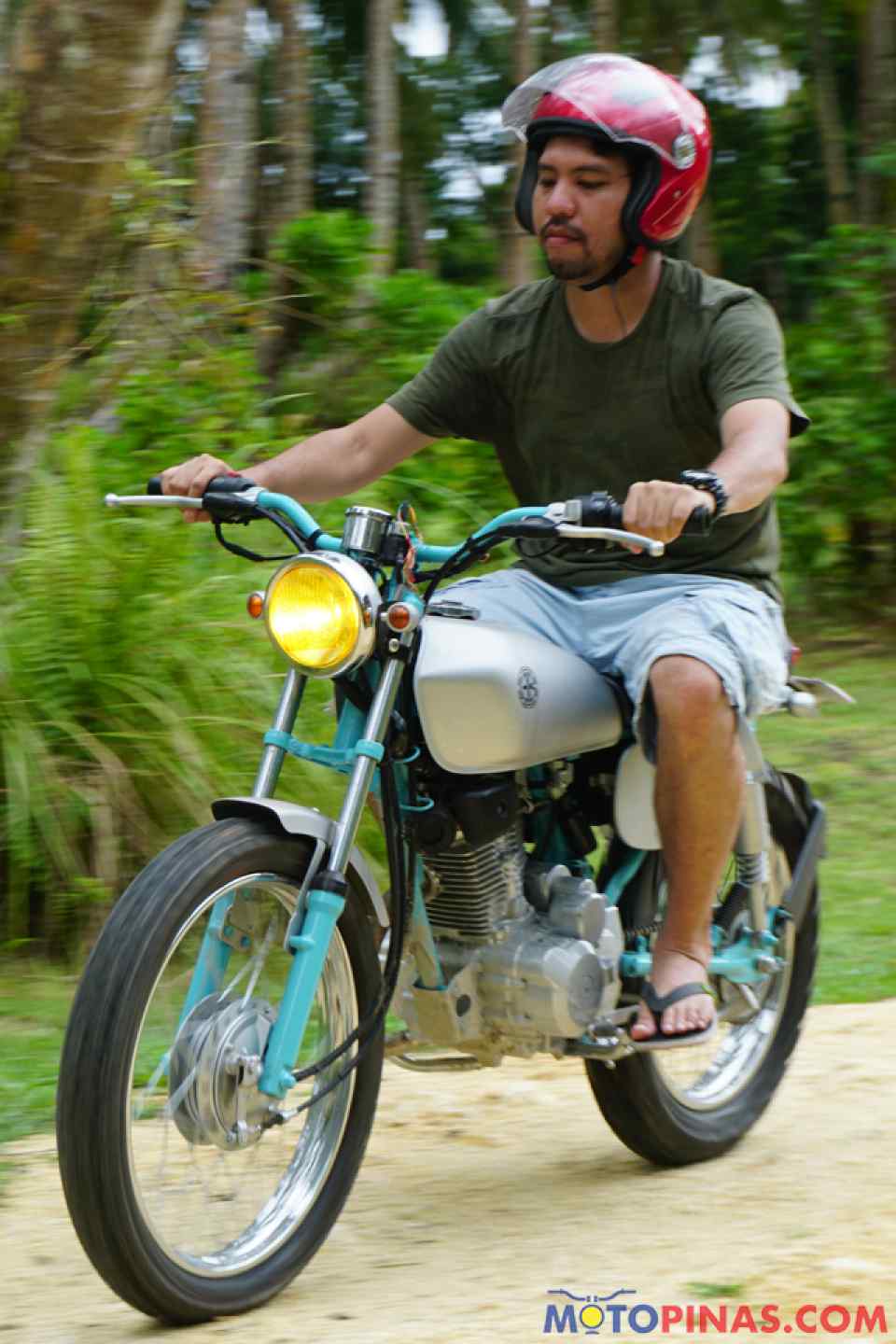 Some of Siargao’s streets can be crowded with the sheer number of tourists on peak season and there’s no better way to squeeze through them than on two wheels. Once out of town, many of the island’s roads are smooth and newly paved, leaving little to worry about but the ride. There are a few scenic sweepers, particularly the road that connects General Luna to the port town of Dapa. 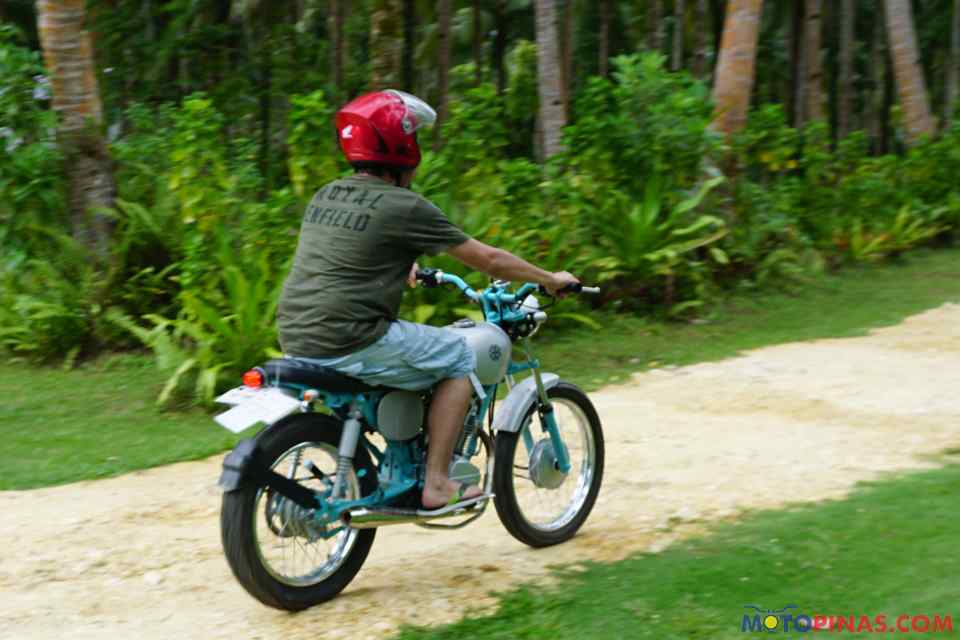 For the most part, we recommend renting the bike and availing of the provided helmet. Keep your speeds to 60 km/h or below. And keep in mind what most of the locals will say, “No worries.” The past 3 Moto Builds Pilipinas winners pit their skills against each other for this year's Battle of the Champs.