The Bangkok International Motor Show has made a name for itself as one of the most significant motor shows in the ASEAN region. There's certainly no question to its significance in the automotive industry, yet its influence is growing when it comes to two wheels as well.

With the Philippine motorcycle industry nearing the 1-million units per year milestone, a peek at the bikes on display at BIMS serves as a valuable barometer of what could follow to our shores. While scooters and underbones still very much dominate local sales, veteran riders are beginning to shift to larger motorcycles.

Thailand, by contrast is a more mature market, with sales leaning heavily on the lightweight backbone category (250-350cc). In addition, it has two homegrown brands, Stallions and GPX, producing a wide variety of two-wheeled modes of transport, and both present at the show with their respective vehicles.

This year's show finds many of the brands playing catch up with Ducati, cashing in on the current scrambler / roadster craze. BMW, Honda, and Triumph presented their own interpretations. Nonetheless, new dual sports, cruisers and sport bikes were also present. 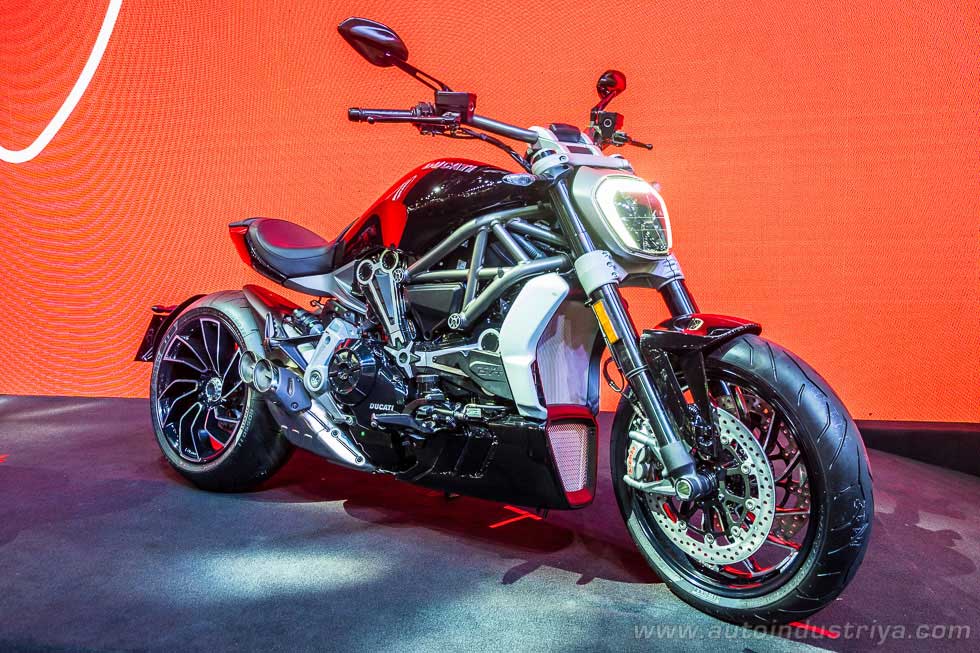 Quite appropriately, Ducati pushed the scrambler bar further with the launch of its Mike Hailwood limited edition. The special Scrambler is a collaboration between the Thai distributor of Ducati and Hailwood’s estate, and limited to 58 units. The bike is a nod to the 1978 Isle of Man-winning 900SS and is powered by an 803cc V-Twin. It features retro livery, a retro tail and whole host of performance parts.

Another showstopper was the XDiavel, a sporty cruiser with variable seat handlebar and footrest positions, all powered by a Testastretta DVT engine. True to its cruiser style, torque comes in at a low 5,000rpm, with cruise control, Bluetooth multimedia and provisions for GPS guidance. 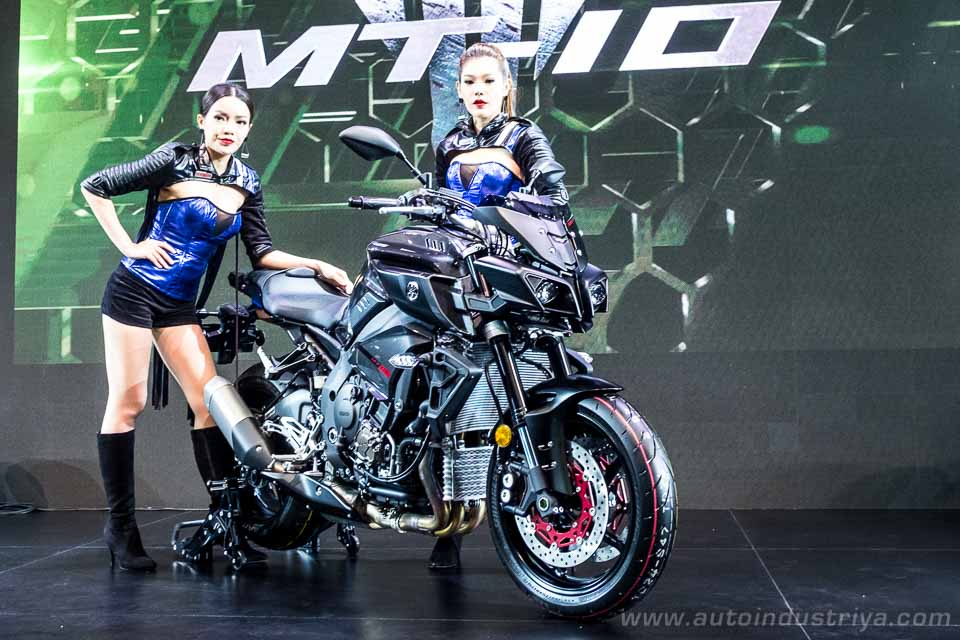 With the popularity of the MT-09, Yamaha took it up a notch with the MT-10. The futuristic naked liter bike is powered by a 998cc water-cooled engine with traction and riding mode programs. For those that find a liter a little too much, there's also the MT-03, sporting a 321cc, water-cooled DOHC. 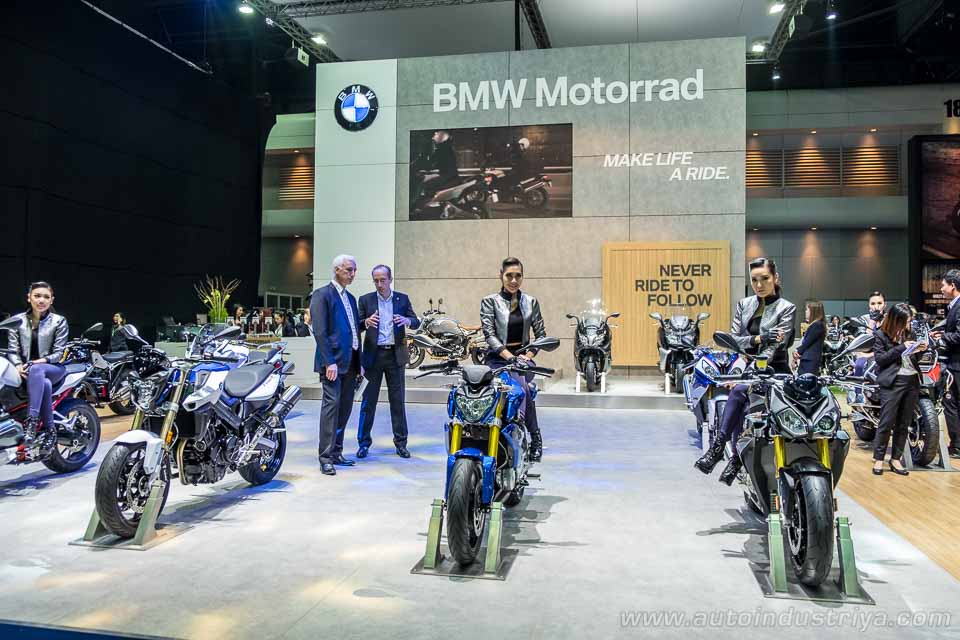 Making headlines is the first product of the TVS-BMW partnership, the G310 R. The Bavarian's first sub-500cc motorcycle shows off lots of inspiration from its R sportbike line. The new G-line is to designate engines with a backward-titled cylinder orientation, said to improve the bike's balance as well as fuel-air mixture. ABS is equipped as standard. It will be assembled in India.

Addressing the current scrambler is the R-NineT Scrambler, sporting a more rat-rod look with a brushed aluminum tank and visible welding seams. True to the scrambler ideal, it features street-friendly knobbies, a new seat and higher exhaust. It is powered by a 1170 flat-twin and comes with a choice of welded steel fuel tank or aluminum.

What originally inspired the Scrambler was the Concept Path 22, also present at the show. The concept was a collaboration with renowned custom builder Roland Sands, artist Ornamental Conifer and famous board maker Mason Dryer. It was conceived to make an appearance at the Wheels & Waves show. As such, it has a unique paint job, a mesh protected headlight, Akrapovic exhaust system and a board holder on the righthand side. 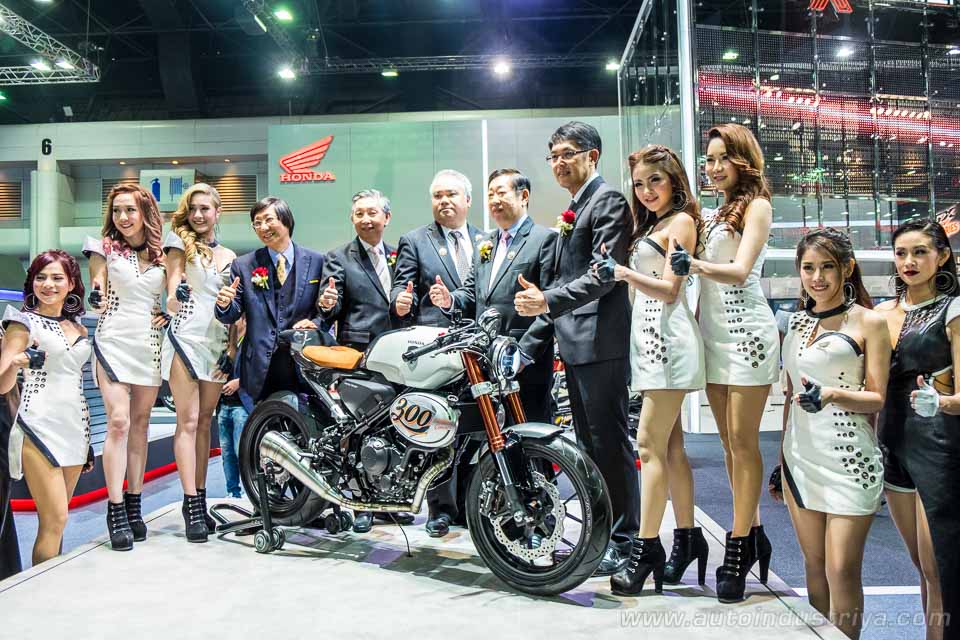 Making its world premier was the 300 TT racer concept, created by Honda Thailand. It derives its engine from the CBR300R/CB300F but employs a new subframe for its cafe racer form. It features LED headlights, a new exhaust and radial-mount front brake calipers.

Honda revealed its all-new Africa Twin dual-sport bike, powered by a 998cc twin. It comes with a choice of a six-speed manual or a new dual clutch automatic with manual shifting on buttons on the left switchgear console. There's ABS and traction control, as well as Honda Selectable Torque Control in both variants. It will be assembled in India.

Besides the cafe racer, Honda also had its own scrambler concept in the form of the CB650F. Like its Italian competitor, the Honda features LED head- and tail lamps with DRL. True to the CB origins, it boasts of a smoother revving water-cooled four-cylinder with exhaust higher up than normal. Gold inverted forks, Y-spoke alloy wheels, as well as Brembo petal brakes give it some added presence. 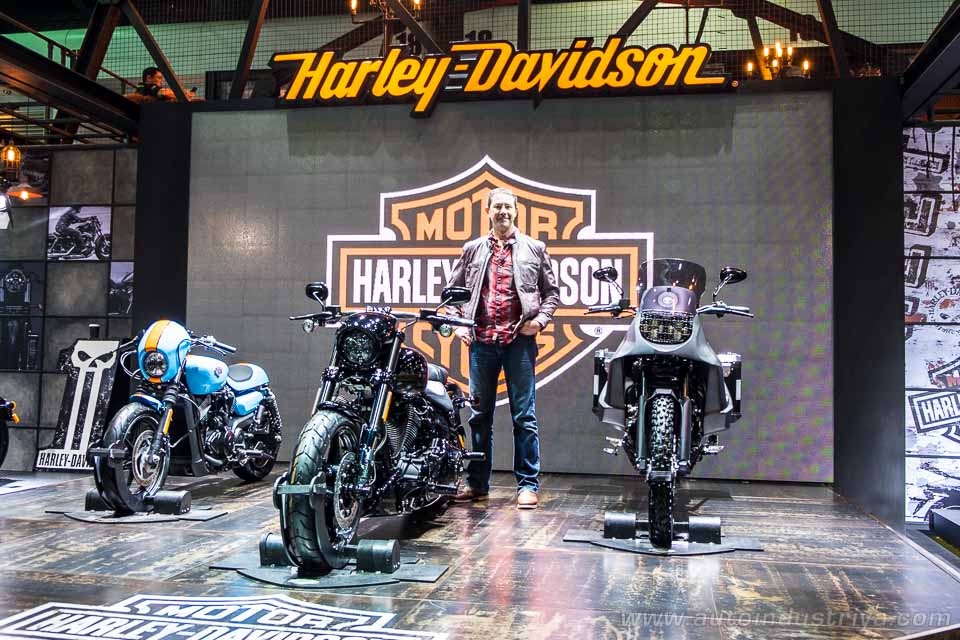 Harley showed off the possibilities of its Street 750 with the finalists of a build-off challenge. Taking the stage were three unique interpretations of the marque's entry-level cruiser. The first featured a retro racing theme with a cowled headlight and fairings, not to mention colors inspired by Gulf Racing. The second was a dragster cruiser custom with its low stance, wide tires and gold accents. The third was a very interesting dual sport execution, featuring brushed aluminum fairing, dirt-spec suspension and tires, and even steel paniers. 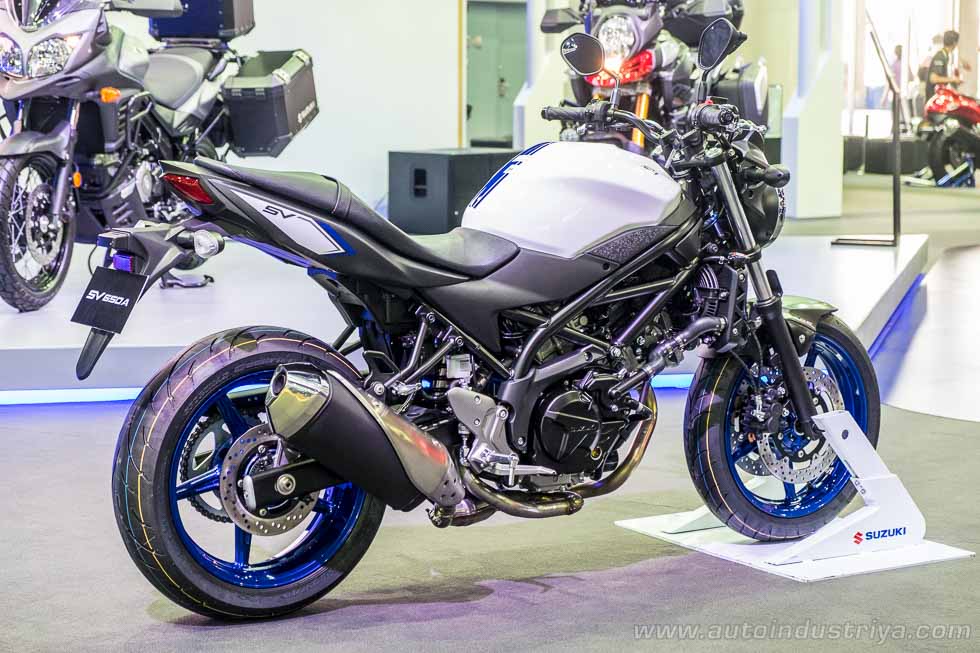 Fans of naked bikes will have new reason to troop to Suzuki with the SV650A. The new model is powered by a 645cc 90-degree V-Twin with twin spark. It also features Throttle-body Integrated Idle Speed Control (TI-ISC) for easy starts, low idling and easy take-offs with less chance of stalling. Finally, a new LCD multi-function display, has added features like fuel consumption and range.

One of the most anticipated sport bikes was the new GSX-R1000. The much awaited all-new model hopes to trump its competitors with its all-new 999cc engine with variable valve timing on an aluminum chassis. There's up to 200bhp on tap, regulated by a 10-level traction control system. It also has a bi-directional quickshifter/ autoblipper and is supsended by a Showa BFF fork and BFRC shock. 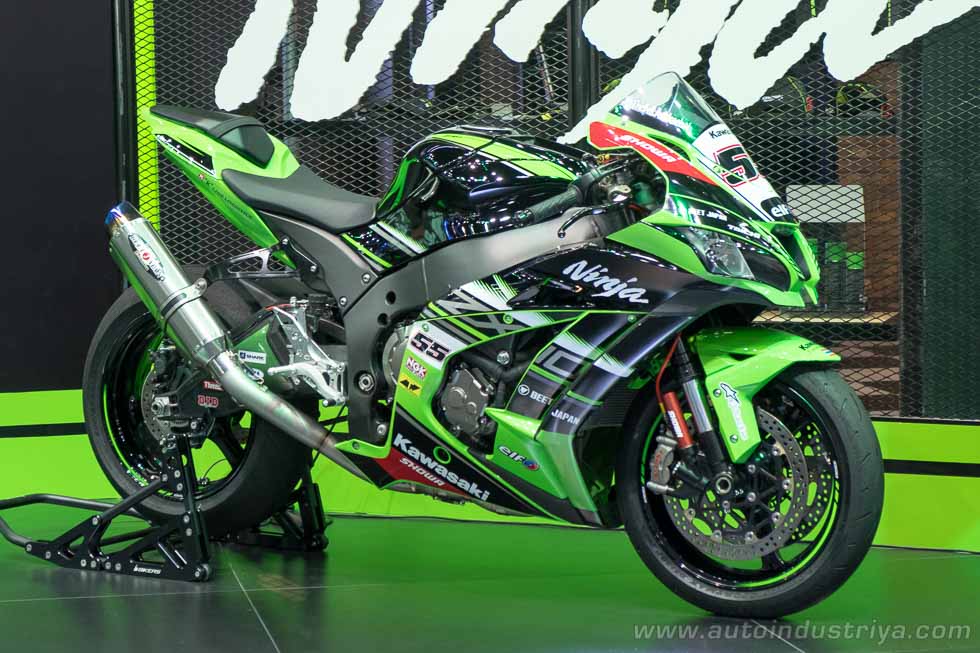 While Kawasaki had no significant new model to display at the show, it certainly made for quite a site with an all green line-up. The marque showed off its entire big bike line-up with examples of the Ninja ZX10-R, H2R, Vulcan S, Z800, Z300 and many more.

Kawasaki's presentation highlighted its rider programs designed to ease the transition from lightweight to middle and liter bikes, ensuring its customers are well equipped to handle the nuances of larger bikes.

Indian-owned British brand, Royal Enfield, was also present at the show with their line-up of bikes on display. The marque presented its Bullet, Classic and Continental GT lines, as well as a custom job on one of the Classics. 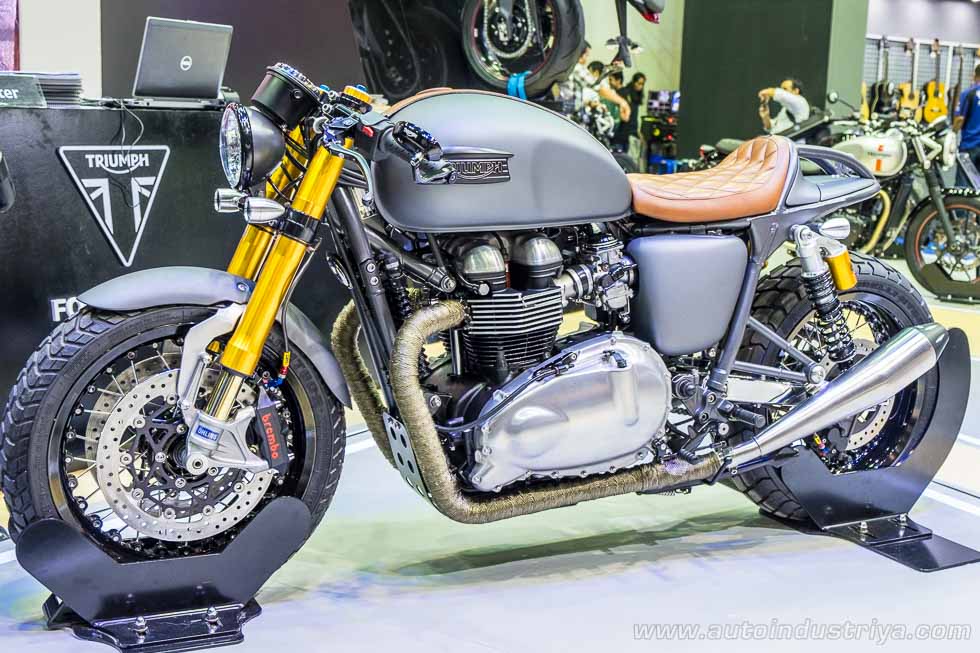 Finally, one of the original purveyors of the cafe racer and scrambler segments was not to be outdone. The British brand showed off new and revised versions of its iconic bikes.

First was the Street Triple RX, a special version of the naked Street Triple with more aggressive style, available in Jet Black or a combination of Diablo Red and Matte Aluminum Silver. It boasts of a retuned Daytona 675R engine, bumped up to 105 PS and 68 Nm of torque.

The classic Bonneville is represented by the T120, powered by a new liquid-cooled 1200cc 8-valve parallel twin with massive improvements in power and torque and aids like traction, cruise control, ride-by-wire, and ABS. Special editions like the Black and Prestige Inspiration Kit add either a stealth or more classic touch, respectively. Like the T120, the Bonneville Street Twin also benefits from a new liquid-cooled 900cc eight-valve engine, for more power and toque. Custom packages like the Brat Tracker Inspiration and Urban Inspiration add the appropriate brat or street custom accessories to its look.

The motorcycles at the Bangkok Motor Show certainly showed a bright future for two-wheeled vehicles in the region. Even more intriguing is the decentralization of manufacture from Japanese and European plants to Asian locations, making the prospect of owning larger and more exciting bikes a more distinct possibility.

We divine the differences between types of mopeds, scooters and underbones. We participate in the TRS-California Superbike School-Philippines to level up our riding skills.