Moto Builds Pilipinas has been the country’s premier custom bike show since its inception in 2015. Many things have changed for the event and its main organizer, Zach Lucero of Makina. What started off as an exhibit held at the Tiendesitas shopping complex, soon found a home sharing the SMX Convention Center with the prestigious, automotive-centric Trans Sport Show for the past two years.

For its fourth iteration, Moto Builds Pilipinas exercised a more stringent registration process for greater quality control. While less custom builds were shown, they were still plentiful enough to overwhelm. Meanwhile, dealers and distributors of motorcycles and gear returned to support the movement with display booths under a new name, the Big Bike Expo. The main event of Moto Builds Pilipinas 2018 was the Battle of the Champs, in which Biker Buildoff winners of the past three years competed against each other.

With a focus on the custom bikes, here’s our rundown of some of the standout builds at Moto Builds Pilipinas 2018… 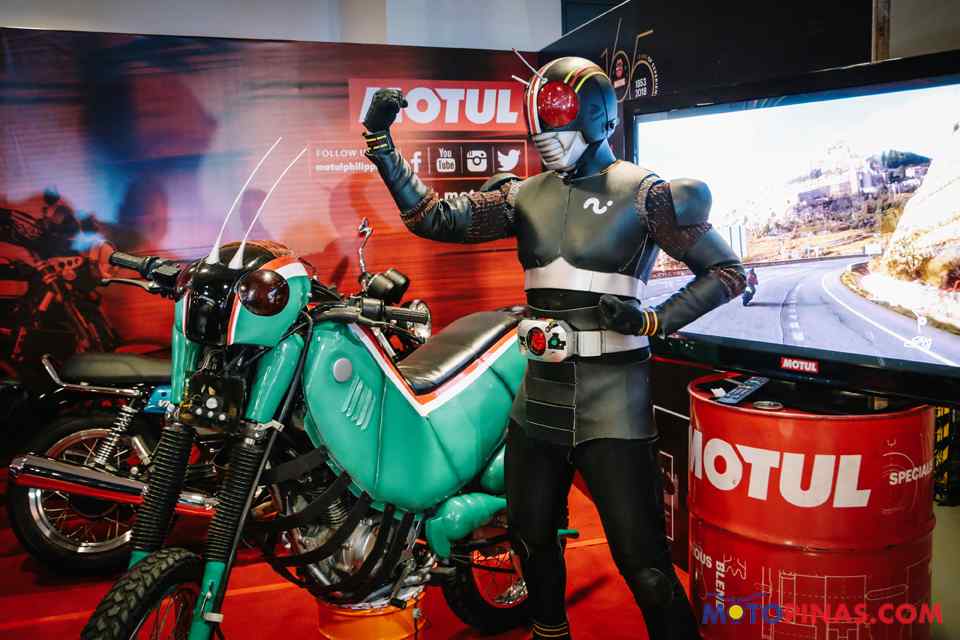 Motul Philippines invited a booth mascot that turned out to be one of the show’s coolest attractions. A Kamen Rider (Masked Rider) cosplayer showed up with an impressive replica of the “henshin" hero’s living motorcycle, Battle Hopper. The dressed-up Honda XR125 delivered nostalgic blows to guests, “right in their childhoods.” 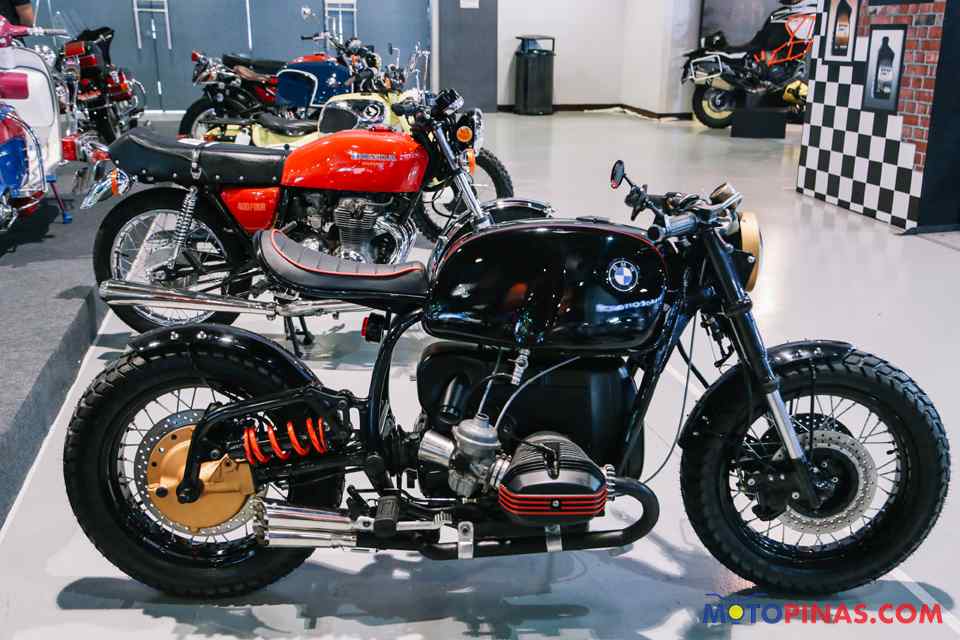 One of the most interesting motorcycles at the show was this 1979 BMW R 100 RT, built by Jay Martin of Top Bike and entered by Ropali Classics. Among its many revisions, Jay did an ambitious single-sided swingarm conversion on the bike, built from scratch and requiring creative re-engineering. While the rear brake was moved to the right side and exchanged for a floating disc, the shaft drive and original hub were retained — with the latter machined to take wire spokes and a smaller rim. 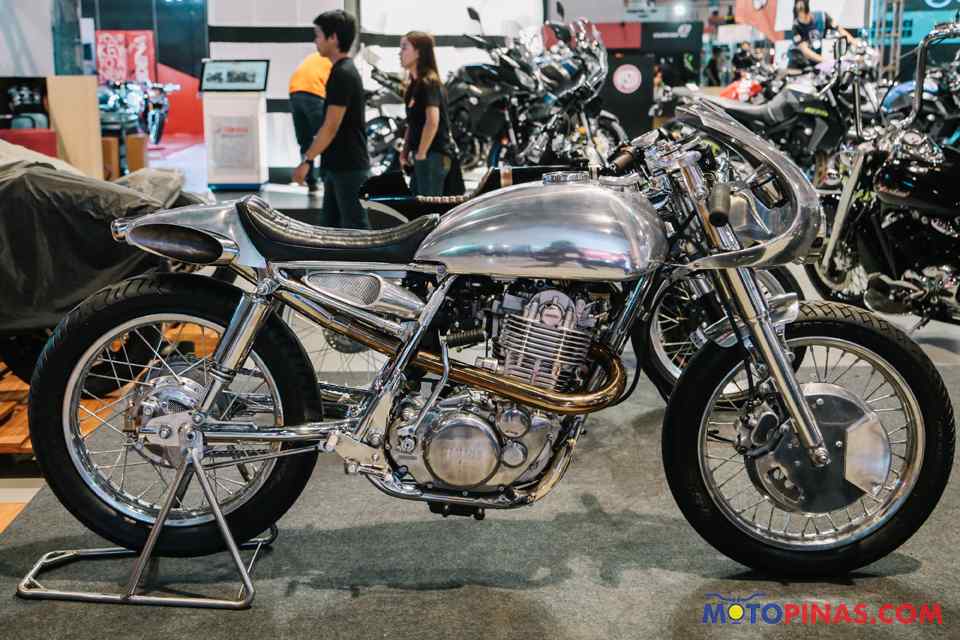 The herald of Philippine pride and custom craftsman of international acclaim, Benjie’s Cafe Racer (BCR Designs), causes a stir whenever he reveals a new creation. This SR400 “Lane Splitter 54” was commissioned by Yamaha Philippines, which entered it into the competition. This was the first time a BCR bike officially joined the fray, after previous BCR builds served as special displays for the show’s past two installments. 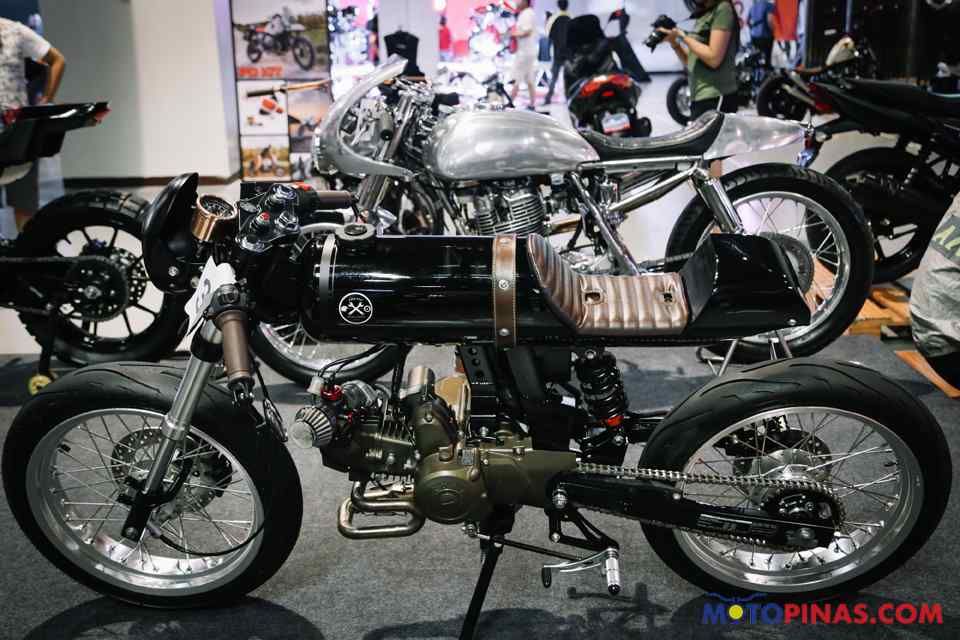 Iron Macchina turned an otherwise humble Rusi Mojo into a great-looking café racer via a new chassis, hidden wires, and a jazzy round tank. The new bike was named “Belleza Negra” and became a piece of rolling, retro-modern art exuding some steampunk vibes. 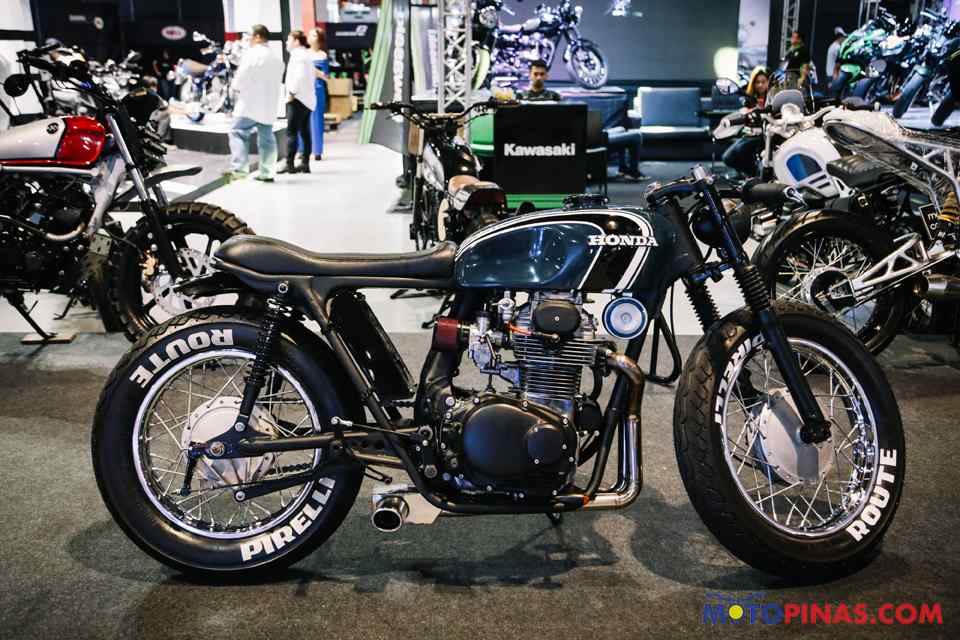 Jerry Formoso Kustoms (JFK) showcased his familiarity with the café racer format through a gorgeous Honda CB350. Aside from the minimalism achieved, the bike also features inverted bar end lever controls, a fabricated exhaust box, and turn signal indicators located under the engine. 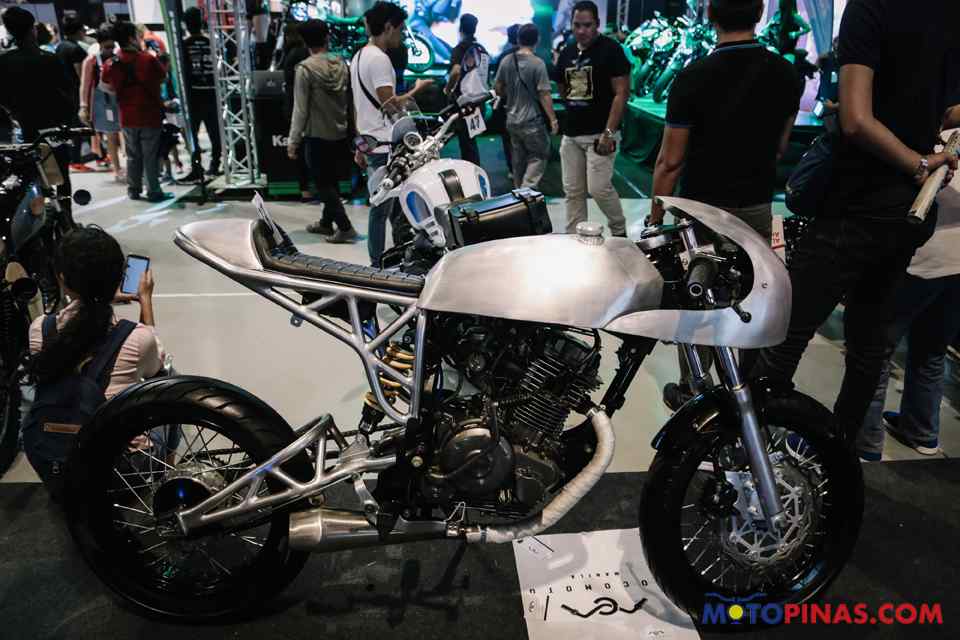 Coco Moto Manila entered their Yamaha SZ café racer with a highly aggressive stance. The design features a new mono shock exposed by a trellis subframe and connected to a trellis swingarm. 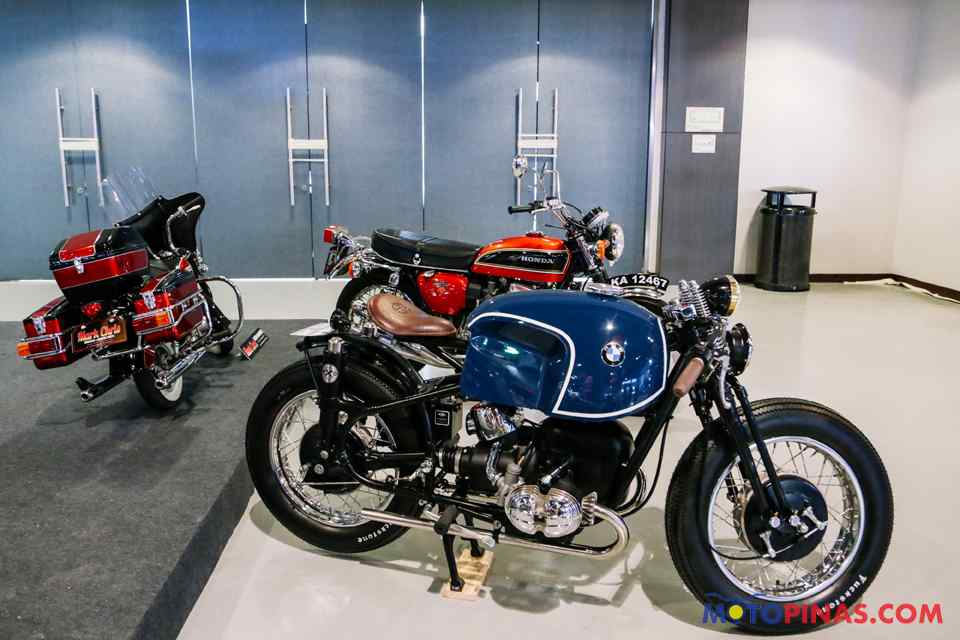 The growing amount of BMWs at the show didn’t go unnoticed. This R 50 was made by Iron Macchina, with a hawkish riding position, springer forks, and a replica of a massive Heinrich tank. 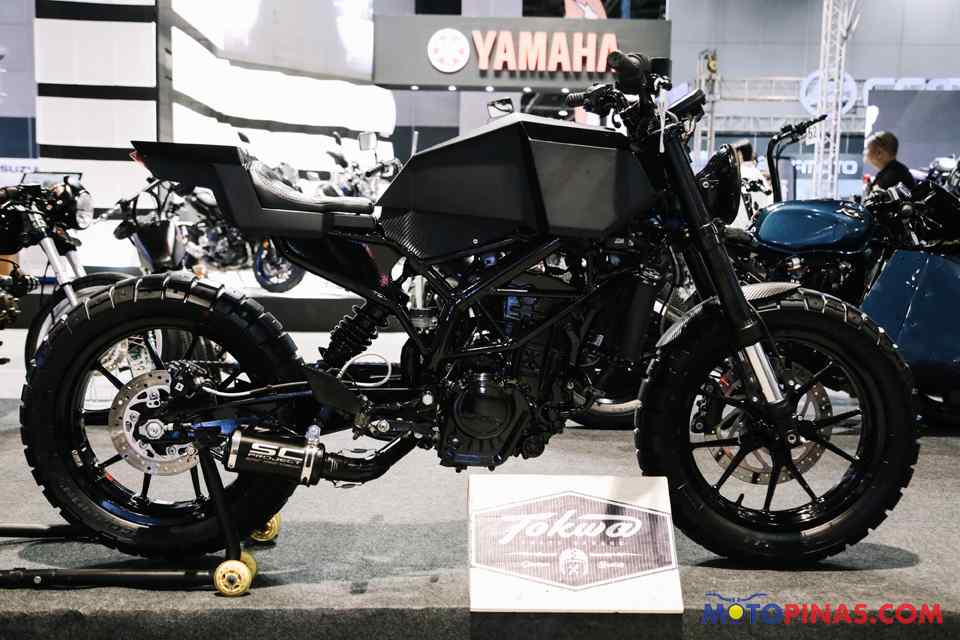 This menacing KTM Duke 200 was revealed by Tokwa Party Garage. Part tracker, part street fighter, this geometric motorcycle was murdered out for stealth and meant for an urban commando. 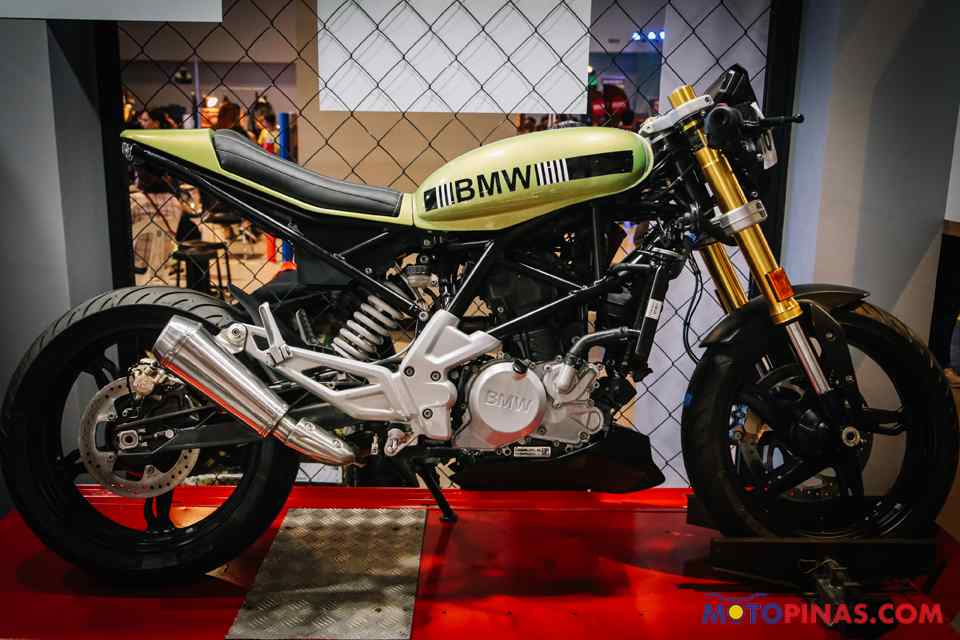 BMW released the BMW G 310 R for the Philippine market last year, and already a unit has gone under the knife. This sweet runabout by STKD shows off all its modernity, while incorporating retro bodywork. The café racer plays with genres by combining aesthetic influences taken from old-school trackers and even ‘70s dirt bikes. 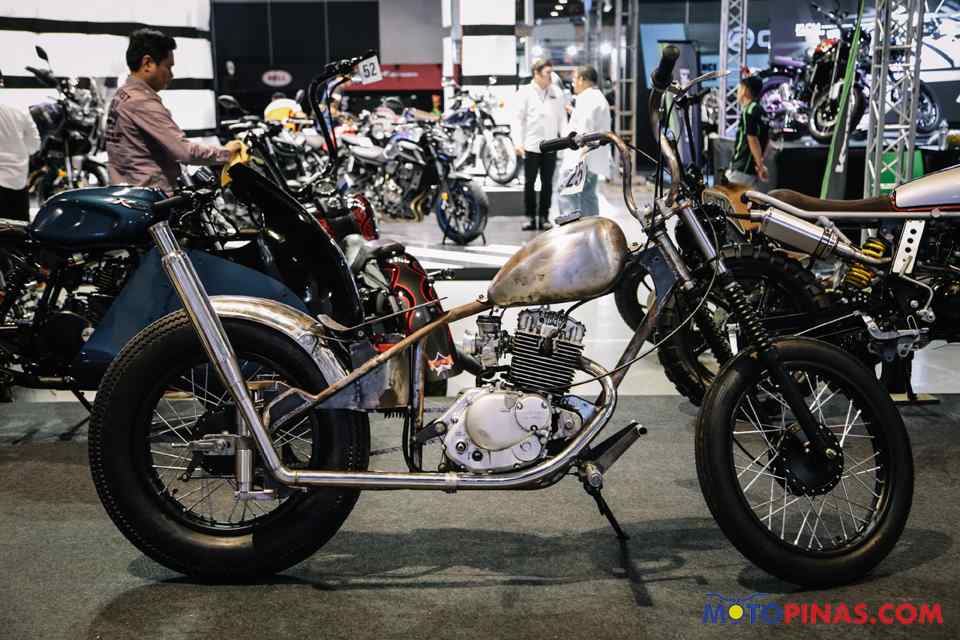 This little chopper is practically an all-new motorcycle. Pretty much everything that’s made of metal, including the frame, was fabricated by hand. The engine was rescued from a Suzuki GS125, and a few other components were salvaged from the parts pile at the builder’s shop, Ylagan Custom. 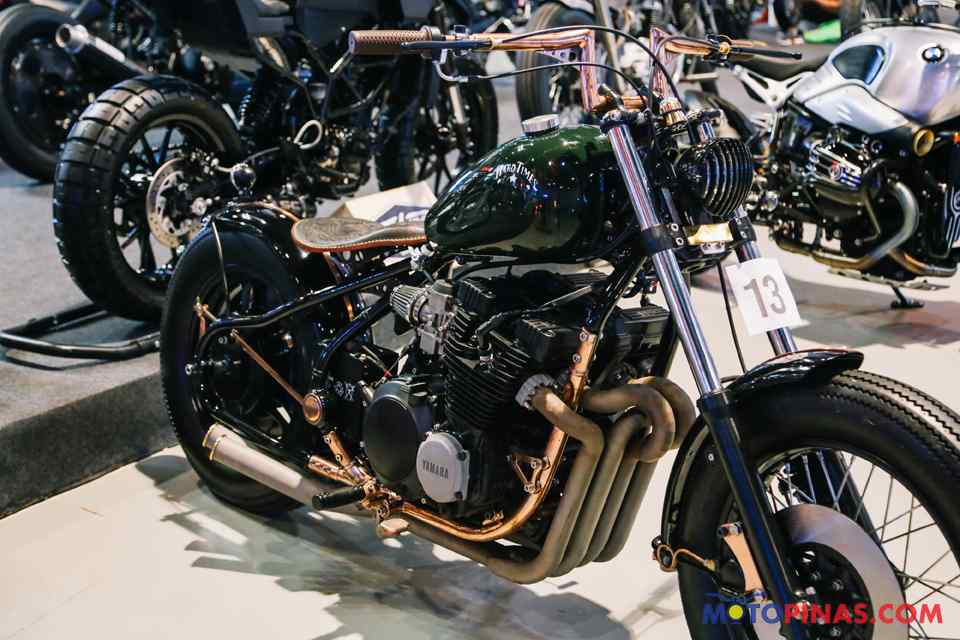 This chopper started off as a Yamaha XJ750 Maxim. With a hardtail conversion among other tweaks, the motorcycle was transformed by Laguna Choppers into a cupreous bobber.

The 2018 Moto Builds Pilipinas show and the Big Bike Expo were presented by Makina and AUB. The two events shared a hall and were held from May 19 to 20 beside the Trans Sport Show at the SMX Convention Center in Pasay City.

We join the final shakedown run of Philippine GS Trophy finalist, Aris Cuevas, before he joins the International GS Trophy in Mongolia. We head to the country's surfing capital, not to surf, but to experience the burgeoning custom bike culture.