Whether you’re deep into the local custom scene or casually infiltrating it, chances are you’ve heard of Kratos Custom Cycles and the man behind the operation — Todee Teodoro. With the internet building bridges across the globe and subcultures hopping borders and oceans to far corners like our very own archipelago, local mechanics and fabricators quickly and quietly started creating Filipino versions of cafe racers, brats, scramblers, trackers, etc — to the head-scratching curiosity of the established chopper-cruiser norm.

Kratos is one of the shops blazing the trail for the art of motorcycle building in the Philippines. With the country’s growing trend for two-wheeled self expression, relatively fresh with hype, Todee of Kratos Custom Cycles swiftly stood out and established himself as one of the best in the business, and Yamaha PH paid attention. 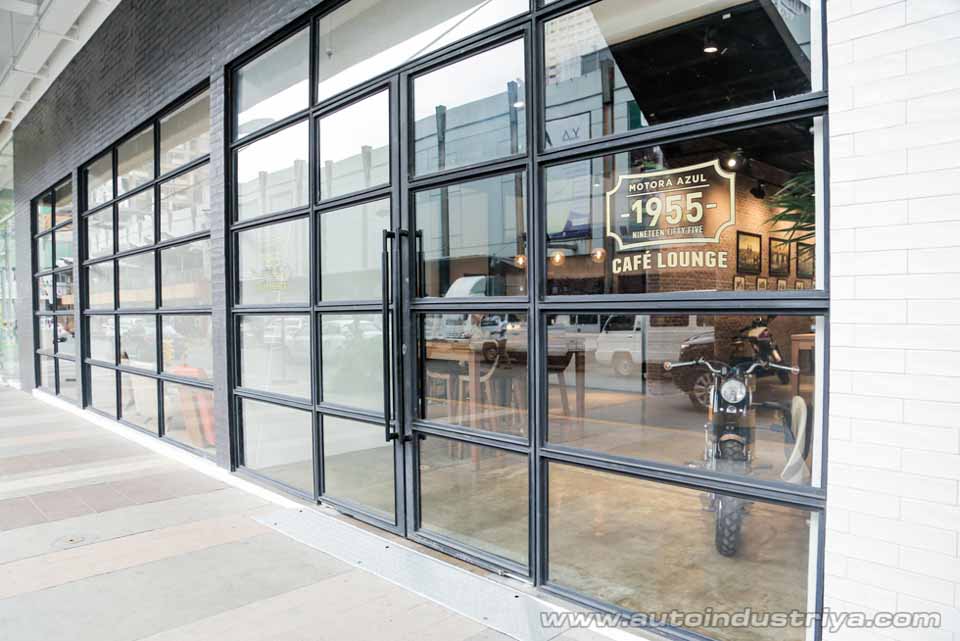 Our meeting place was the brand-spanking new Motora Azul 1955 Cafe Lounge, the motorcycle-themed coffee shop connected to the YZone flagship showroom on Sto. Cristo St. (where EDSA and Shaw Boulevard intersect) in Greenfield District, Mandaluyong City. There, Kratos’ three bikes, commissioned by Yamaha, are on display.

The place is spacious, clean, and refreshingly sophisticated. There was a brick wall, delicatessen-like signage, and the occasional retro prop here and there, but the whole ‘vintage gent’ thing isn’t overplayed thanks to their Japanese interior designer and modern furniture. I marveled at their hanging collection of prints by Kenji Shibata of Seevert Works, the photorealistic oil painter of historic motorcycles. The cafe’s partners, a group of passionate and business-minded bike enthusiasts, whom Todee is a part of, informed me that food would be available at the location soon and bike nights are being organized. The best part about it? Ample and hassle-free motorcycle parking of course, for visitors who want to ogle at their own rides over a cup o’joe. Most of us are guilty.

Todee Teodoro wasn’t always the greasy wrench and metal shaper that motorists have come to love. He actually started off as a fourth-generation leather shoemaker, going on to become a climbing instructor. His family also used to run the equestrian D’Rossa Riding School. Todee left those reins for handlebars and traded in one kind of ‘horsepower’ for another. 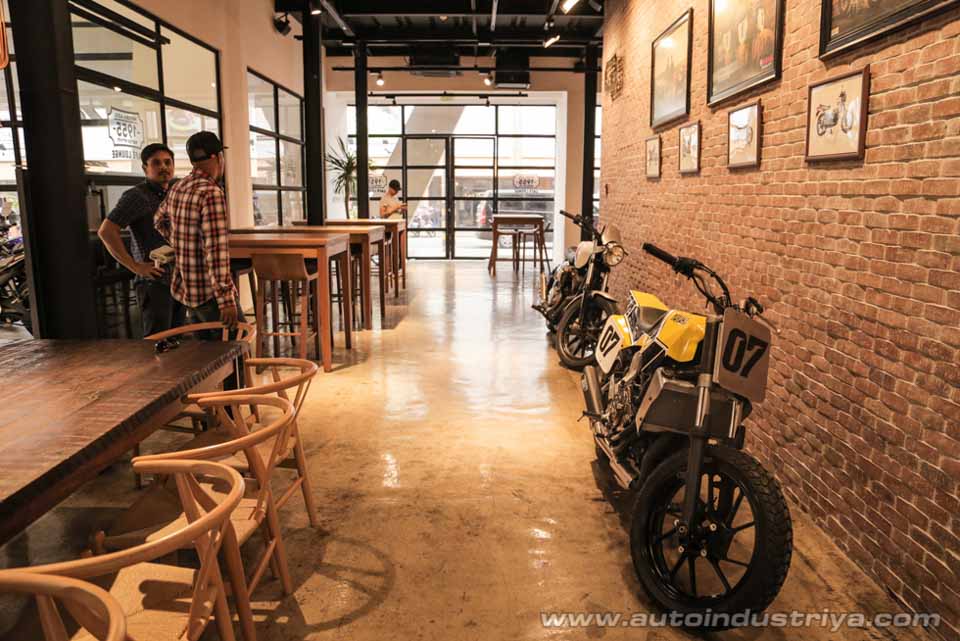 In the early 2000s, he started working on bikes under the mentorship of Jun Banaag, whom he never fails to credit for his training as a mechanic. Todee got hooked on wrenching and ended up turning his own Honda XR250 into a tracker. Friends starting bugging him for their own custom requests, so in 2007 Todee started dedicating his time to learning the ropes of fabrication. His first complete build for a customer was a Honda CB750, word spread, and the flood gates were opened. After honing the craft and creating a name for himself, Yamaha came a’knocking at his door.

Ian David Muramatsu, Product Manager of Yamaha PH and genuine moto enthusiast (with a penchant for vintage Japanese bikes), was the one who contacted Kratos Custom Cycles.

“I was going to Thailand and Indonesia and noticed that the custom build culture there was upcoming. I was very sure it would soon come to the Philippines, so I searched through many builders in the Philippines and noticed that Todee was one of the best,” Ian recounted. “I wanted Yamaha to actively support custom culture here, as well as educate people on how to make their motorcycles more exciting and personalized. Most of the builds abroad you see are big bikes like BMWs and Hondas… Yamaha Europe and Yamaha USA handle collaborations with custom builders; I also want to be a part of that kind of Yamaha activity all around the world. Majority of our market is low displacement motorcycles that are usually used for tricycles. I would like to suggest another way to expand that mindset: ‘This is not just for tricycles. You can make it whatever you want.’”

“Ian actually approached me via my Facebook page and messaged me, ‘Can we meet? I want to do a project with you. I’m from Yamaha.’ So he suddenly popped into the shop, gave me his concept, and the rest is history. I finished their first bike in 2015, but they delivered it to me a year before. When Ian’s bosses finally approved, I only had less than a month to do the whole bike… But good thing that the bike was sitting in my garage for the longest time so everything I wanted to do was already in my head. By the time they gave me the go signal and the budget, I just kept pounding away,” said Todee. 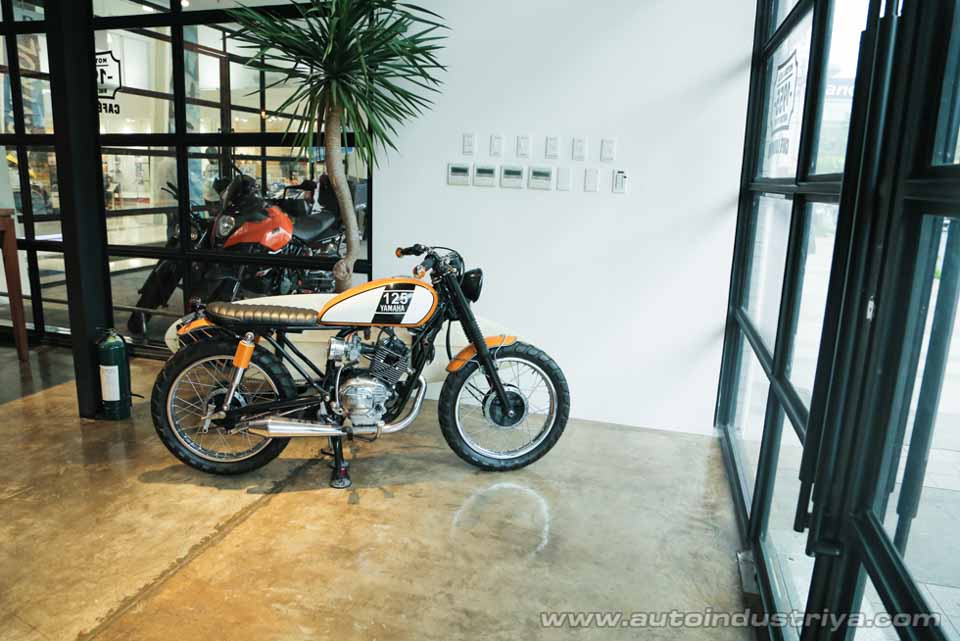 The aforementioned first Yamaha project is the STX125 at the window, loosely inspired by the SR250 of the ‘80s and rather beautifully greeting passersby. It’s the bike with which Todee had the most creative freedom, so he chose to build a clean and zesty scrambler with surfboard mounts.

Todee is a surfer himself, explaining that good waves are quite far from Manila. Because a surfboard can prove difficult in crosswinds on open roads, the bike is meant to be carried on a truck and alighted to hit the beach with ease where a car would otherwise feel too bulky. The little scrambler is clean with its minimalism, highlighted by the sheen of a newly built exhaust system and air cleaner. Also custom is the subframe and swingarm — punctuated by a sun-kissed, handmade tank painted in a metallic pearl yellow-orange that carries over to the fenders. “I like doing bikes that pop, not the conventional black. I want my bikes to stand out,” Todee reminded me. The bike won best in its class during the first Motobuilds Pilipinas show in 2015. 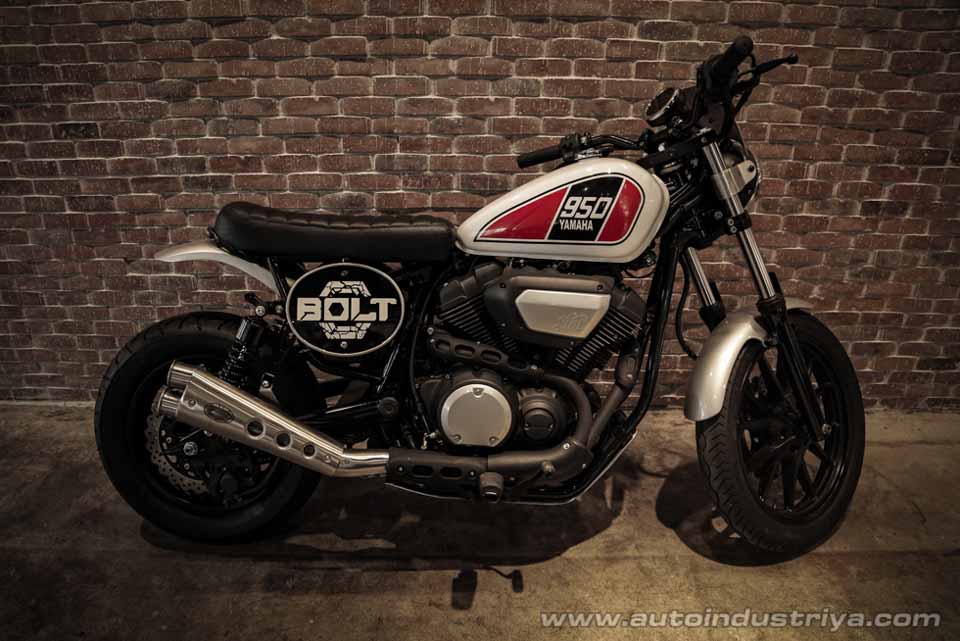 We then walked over to the XV950 Bolt, also a scrambler. Todee kept the tank stock, but laid a new retro paint job over it. The subframe was rebuilt as bolt-on and the rear suspension was lengthened care of 12.5” Progressive shocks. With the higher seating position, the gauge was raised to ergonomically meet the rider’s line of vision, featuring a handmade shield. A flexible LED strip serves as both the bike’s brake light and turn signals in the rear. Cutting the pipe to accommodate a slip-on Zard exhaust required care and knowledge of sensor location. The Bolt, along with the next bike, were both done together in three weeks to make the 2016 Motobuilds Pilipinas deadline — an impressive feat that, Todee once joked, caused a lot of ‘stress eating’. 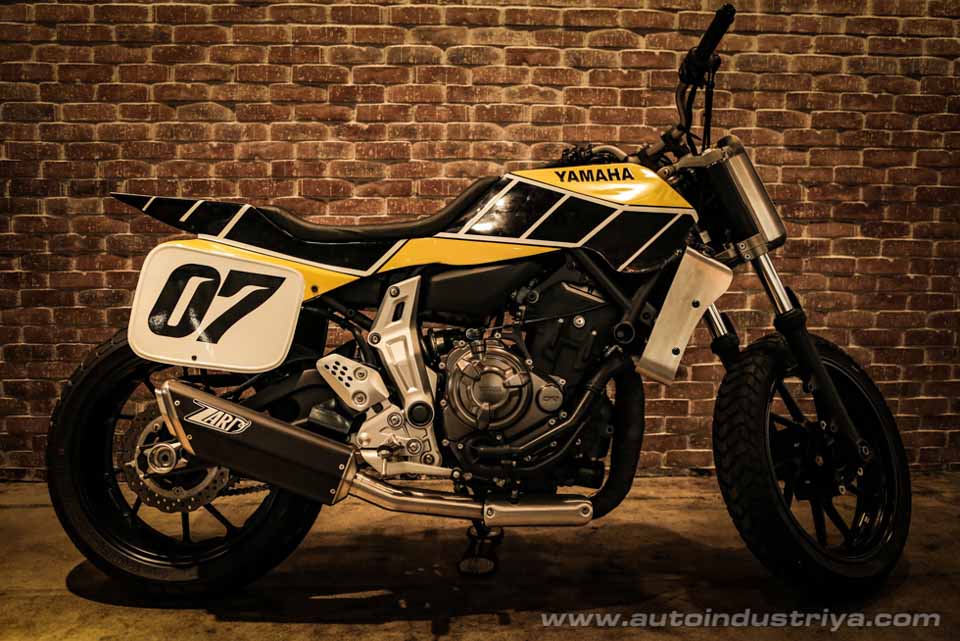 The third was an MT-07 flat tracker, purposefully built for romping around dirt ovals (as hinted by the absence of front brakes and headlights). Yamaha gave Kratos the DT-07 as a peg, but Todee veered away from the concept in order to make it his own. Its suspension wasn’t compromised with the raised seat height. The subframe was chopped while the radiator shroud, heat shield, and front number plate were fabricated in aluminum. Like the Bolt, Todee made a new exhaust system to receive a Zard slip-on. The aggressive angularity of the body becomes more conspicuous as you walk around the bike, complemented by the retro-modern livery; the graphic variation of lines of swell and squeeze to follow the polygonal facets. It is a bodykit with a half-gallon fuel cell, which he has ambitions to recreate in carbon fiber. The motorcycle will also get different tires eventually, and even if the build is an ongoing project, it managed to win second place in its category at this year’s Motobuilds Pilipinas. “This is unfinished. It’s a prototype. I’m still going to refine it a little more. It’s going to look really cool when it’s done,” Todee insisted.

It’s not everyday that a shop like Kratos Custom Cycles gets commissioned by one of the biggest brands in motorcycle manufacturing, moreso an even rarer opportunity to build not just one, but three bikes for a marque. Getting to chop new, expensive, large displacement motorcycles, I’d imagine, would be a highly amusing honor and challenge to any builder. Yamaha PH and Todee are even exploring a fourth idea, and if their talks become reality, the product is going to be wild.

The Kratos collaboration ties in with Yamaha’s aggressive and refined marketing strategy that effectively appeals to its existing customer base and potential buyers alike.

“We only have one shop in the Philippines that sells big bikes, but in the future we will expand. By the end of 2020 we are planning to have 5 all over the Philippines including Cebu and Davao,” Ian Muramatsu declared.

Yamaha PH has its knee down and head tucked, developing the local motorcycle lifestyle in preparation for their throttle-happy invasion…And Kratos Custom Cycles is helping them bring the endless possibilities to light.

The premier custom motorcycle show, only in its second year, reflects how big the local scene is getting We participate in the Ducati Riding Experience to pick up some valuable tips for riding big bikes on the street.