A Guide to Common Types of Motorcycles A motorcycle is a special thing indeed—a machine both fascinating in complexity and elegant in its simplicity. As its rider, you’re completely exposed to the elements with a panoramic perspective of your surroundings, while other people’s view of you is unobstructed in return. Getting into the world of motorcycles can feel like assimilating the culture of another tribe of road warriors, and we can help alleviate some confusion. This is an introduction to common motorcycle styles based on purpose, preference, and philosophy. Naturally, the lines between these types can blur when it comes to industry evolution, and you will find hybrids of these distinctions or models that completely break the mold. 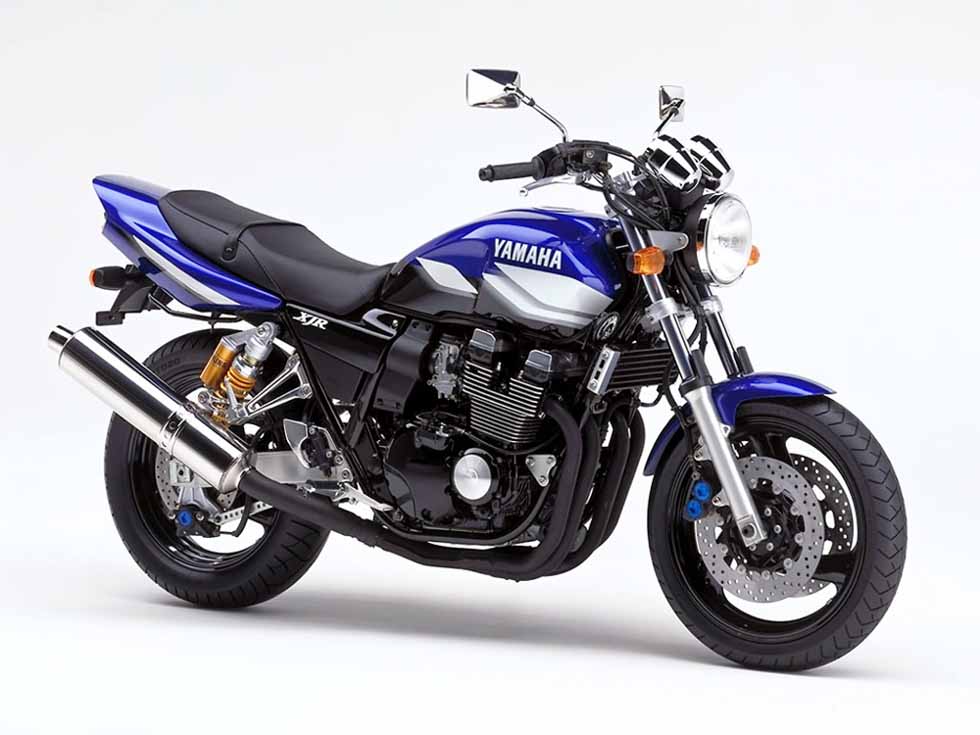 Standard motorcycles are street bikes or roadsters that are usually naked (without full fairings concealing the engine). These are your usual rides meant for the road. Characterized by versatility, relative comfort, ease of use, and a recognizable upright riding posture, standard motorcycles make excellent commuters and first bikes. Foot pegs are usually found aligned under a rider’s body or slightly forward to rest right under a bent knee. As well-rounded, reputedly wholesome vehicles with conventional suspension geometry and controls, they are less likely to break the back and the bank. 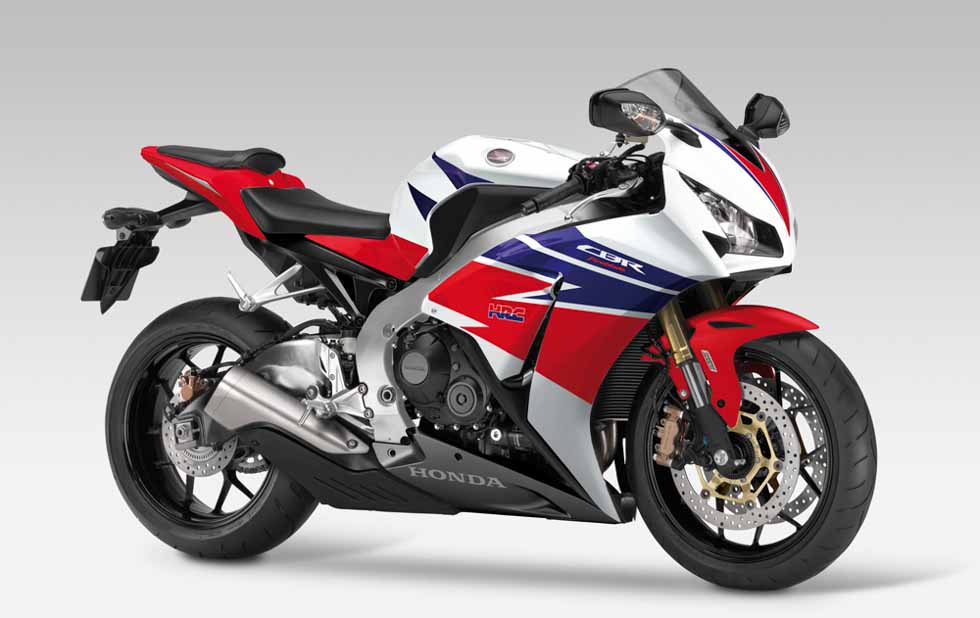 The sport bike, sportbike, or sportsbike, is a designated high performance motorcycle just like your quintessential sportscar — fast, deadly, and sexy. Built using lightweight materials for both superior speed and handling, sportbikes are seen battling it out in circuit and road races for production motorcycles, showcasing the engineering prowess of proud manufacturers. These advanced bikes are recognizable with predatory riding positions that force the pilot to lean forward on low and narrow handlebars, towards front suspension forks with less rake. Panels or shells called fairings protect the engine and provide air-slicing aerodynamics, distinct design cues, and space to display liveries and sponsorship decals. When a sportbike reaches the 1000cc “liter bike” displacement and starts to race at the upper echelon of motorsport, it effectively becomes a superbike. 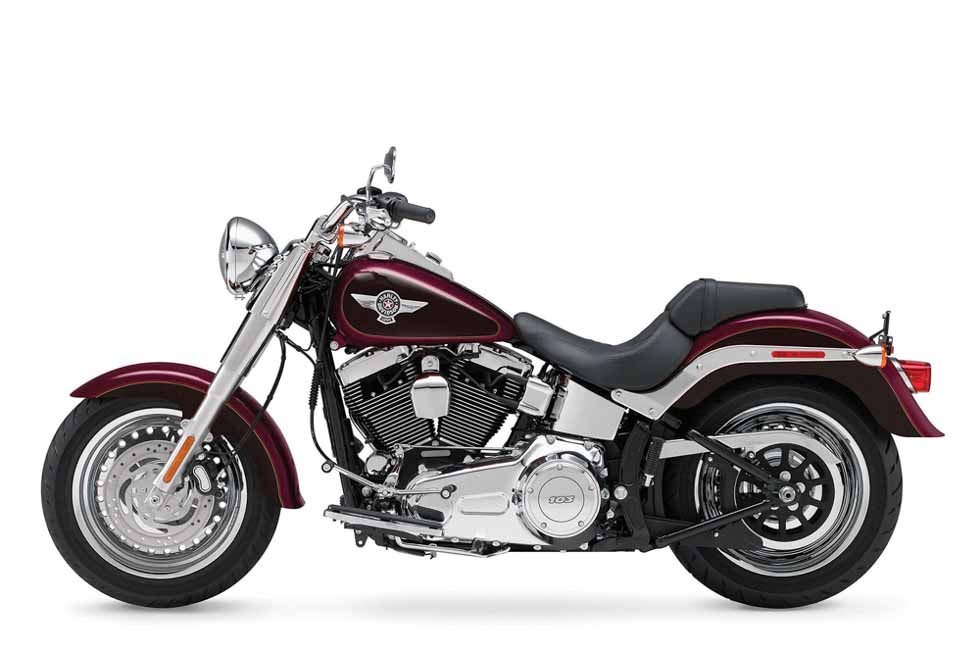 Cruisers originate from pre-WWII motorcycles and have gone on to solidify themselves as epitomes of either relaxed and effortless cool or badboy attitude. These bikes are immensely popular for their customizability, comfort, and community culture that owning one offers. The feet forward position of a cruiser is an immediate telltale sign. Pegs bring a rider’s feet forward from anywhere that looks like throne level to lazy boy. Handlebars can span a wide range of width, height, and format thanks to the varied availability of aftermarket parts for both visual impact or personal ergonomics. Many brands offer these bikes and entry-level ones can use smaller displacement engines, but the most iconic cruisers remain the big American V-twins. 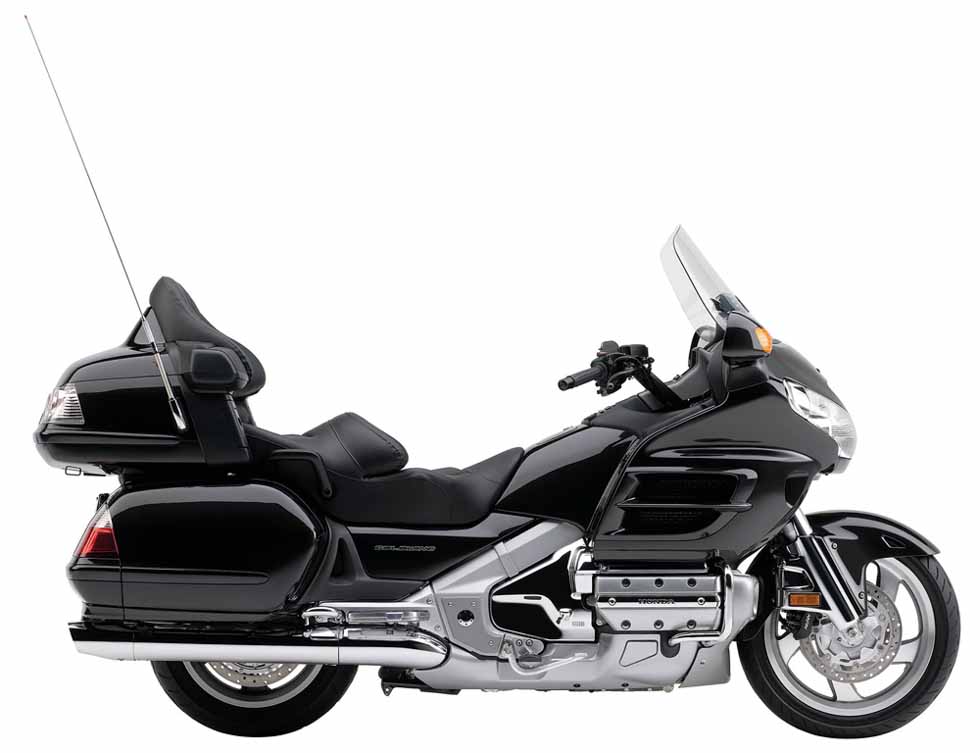 The kings of the road must be the tourers. Touring motorcycles are purpose-built for long distance rides on endless, interstate ribbons of pavement — combining derrière comfort, an upright riding position, good load carrying capacity, and amenities convenient for road trips (like cruise and climate control). They have big fuel tanks and large displacement engines to provide range and smooth highway speed — all under the weight of more electronics, equipment, passenger space, and cargo. Windscreens and fairings provide protection against the elements and unlucky insects. Sport-touring bikes are hybrids that often share detuned engines from their pure sportbike counterparts, combining technical performance for spirited riding with long-distance features. Baggers are big cruisers equipped for touring and outfitted with panniers or saddlebags (either hard or soft). Top-of-the-line Full-Dressers are some of the heaviest, most expensive, and most luxurious production bikes on the market, featuring advanced suites of electronics, radio, mobile apps, GPS, and other goodies that can make you feel like you’re controlling something closer to a car. Adventure bikes can be considered dual-sport tourers that can go off-road, but we’ll get to that in a bit. 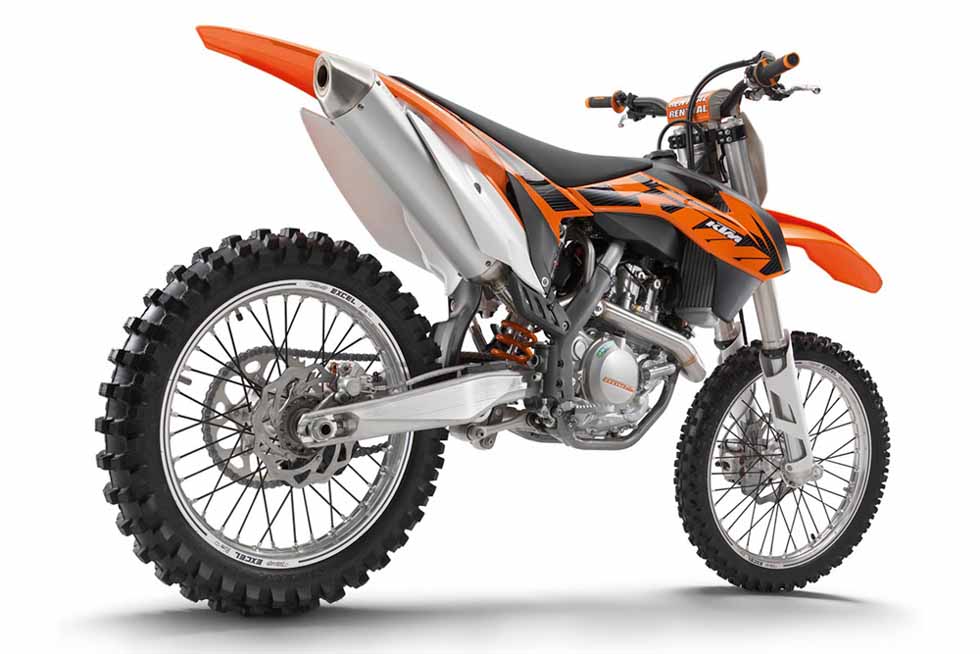 These off-road bikes are meant to go on unpaved terrain and have the knobby tires, ground clearance, and longer suspension travel to handle it. Around the turn of the century, early motorcycles took to the street and to the dirt with off-road trial racing emerging in the UK. The motorsport would later evolve into motocross. Dirt bikes are tall and sturdy rallying machines meant to invigorate, hit the trails, and explore. It is still common to find dirt bikes using two-stroke engines, and lacking street legal features (like lights, indicators, and horns). Some specialized models were made to excel in certain motoring events, like Trials bikes with hardly any seat if they had any at all. Supermotard, Adventure, and Enduro bikes have dirt bike genes but are dual-purpose for use off and on the road. 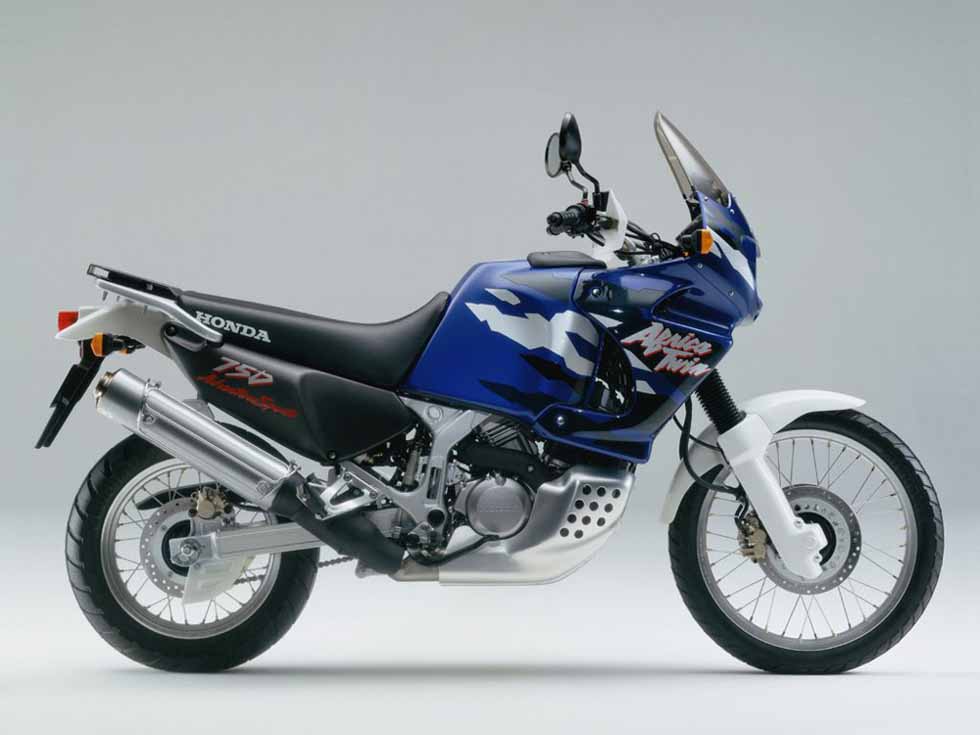 A multirole dual-sport can brave both the open road and the uneven terrain of the great outdoors. Motorcycle manufacturers combined their knowledge of dirt and street bike technology to create versatile, adventuring machines with a good amount of ground clearance and suspension travel. Dual-sport tires come with knobs, varying in how pronounced they are from chunkier to slicker. Enduro bikes are essentially dirt bikes—outfitted for long distance riding (like having more fuel capacity), equipped with road-legal necessities, and built with a focus on off-road capability. Supermotards, supermotos, or motards have the height and agility of a narrow dirt bike, but come with street performance tires. They can tear it up in the dirt, but really excel carving paved roads and maneuvering through the urban jungle. Adventure bikes describe the umbrella term encompassing a diverse range of highway touring power, features that are conducive to long-distance travel, and comfort in mind. They’re well-rounded mounts with soft, smooth suspension and levels of off-road capability varying between models. BMW may be credited for bringing the early adventure bike concept to the mainstream, but you can turn any dual-sport, dirt bike, or street bike into your own adventure bike with modifications and personalized touring accessories. 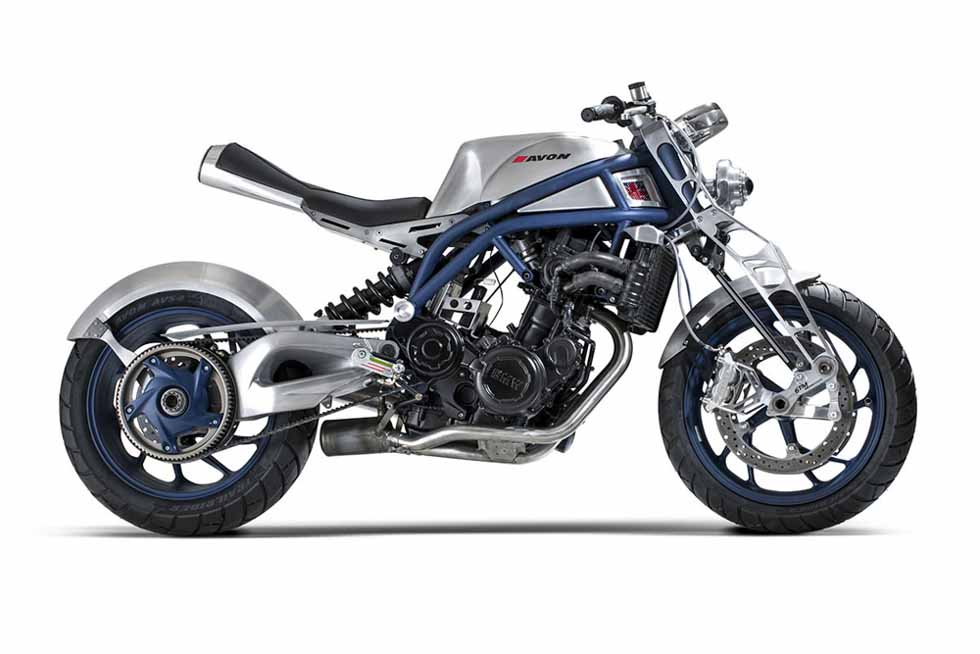 Made by the public for the public, these personalized creations are products of self expression and aspiration — testaments to the adaptability and customizability of motorcycles in general. How riders modify their motorcycles for competition or aesthetics continues to influence manufacturers in their creative process. Choppers are heavily customized cruisers usually following the ‘60s American thing for long forks and steep rake. Bobbers are cruisers as well, lightened for more speed and tighter maneuvering via minimalism and narrow handlebars. Cafe Racers were Cold War street bikes shed of excess weight and altered to perform like road racing sportbikes. The riders who raced between English cafes in the ‘60s are still paid homage to today by retro styling. Take a modern sportbike, remove fairings for naked aggressiveness, achieve an upright riding position, and shorten the exhaust to create a Streetfighter. Brat bikes point us to Japan where standard bikes or cruisers are fitted, in a budget-friendly way, with slab seats and upright or swept-back handlebars. Trackers are tributes to flat track racers via retro minimalism and wide handlebars, designated to perform on either the street, dirt, or both. Modify a road bike like the way you would a cafe racer and give it tracker-like versatility, dual-sport tires, higher engine and exhaust clearance for off-roading and small jumps, big torque, and a small tank for shorter distance sporting; you will be formulating a Scrambler. Some motorcycle craftsmen also like to stretch out and build bikes of nostalgic beauty after turn-of-the-century board trackers and even high-speed salt flat racers.

We participate in the TRS-California Superbike School-Philippines to level up our riding skills. T-COLLS every day: a pre-ride checklist