The Quirino Grandstand echoed with the rev of engines and SuperMoto bikes taking to the air last Sunday, during round two of the FIM Asia SuperMoto Championship, held in Manila. Battling it out with the seasoned international riders was our very own Philippine SuperMoto Team composed of Kenneth San Andres and Mark Reggie Flores. Of the two, San Andres, has already managed to secure points in the ongoing Championship battle.

After a strong finish in fifth place in the first heat (Moto 1) of the FIM Supermoto Manila Leg, Andres was already looking forward to gaining some more points in the next heat. Despite a promising start during the second heat (Moto 2) San Andres had to retire from the race due to a flat tire.

“Medyo hindi tayo sinuwerte ngayon. First lap pa lang po sa first corner, yung rider sa harap ko natamaan yung ipa [sack], so kumalat sya sa corner sa [racing] line ko mismo. So, wala na akong time makaiwas kasi tutok po ako dun sa rider. (Luck is not with us today. On the first corner of the first lap, the rider in front of me hit the sack barrier and its contents spilled on my [racing] line. I was unable to maneuver since I was tailing the rider.)” he said. 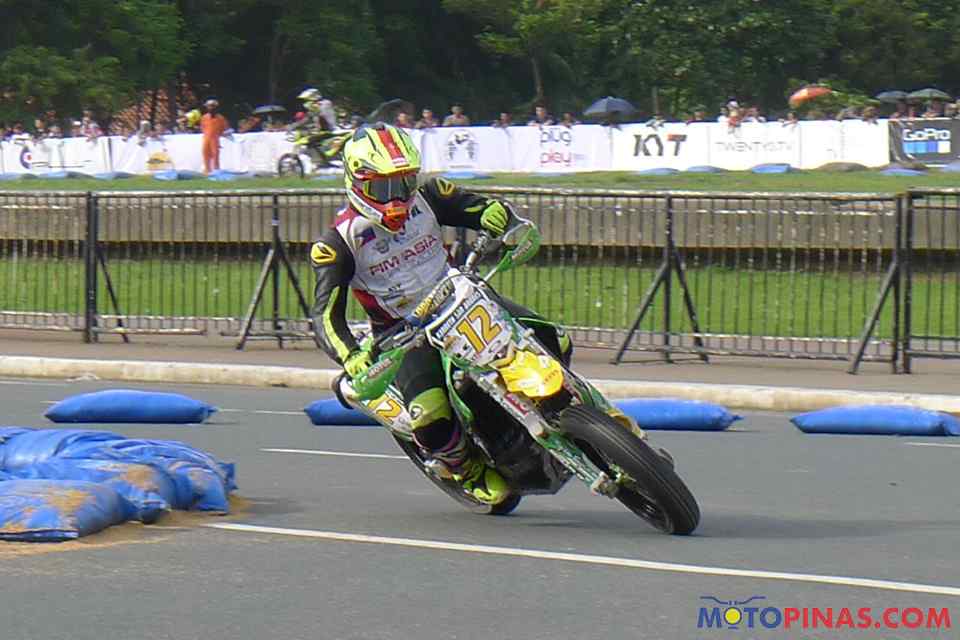 Following a few more laps, he figured in a crash with another rider.

The misfortune continued later in the heat as San Andres met the unthinkable: a flat tire.

When asked how or where in the racetrack it happened, Kenneth simply said, ”Hindi ko na rin po alam kung paano nangyari ba’t na-flatan po ako. So nung flat na po yung rear tire ko, delikado na po kung itutuloy baka ma-penalize pa ako ng FIM. (I can’t really tell how it happened. It was dangerous to continue and I could be sacked with a penalty by the FIM).

With a flat rear tire, San Andres decided to play it safe and return on the last lap to keep the points for the next round. “Hinintay ko na lang po yung chequered flag then pasok na lang po ulit ako para sa points. Marami pa naman rounds, three rounds pa po.” (I just waited for the chequered flag and went in again for the points. There will be plenty of rounds ahead, three more). 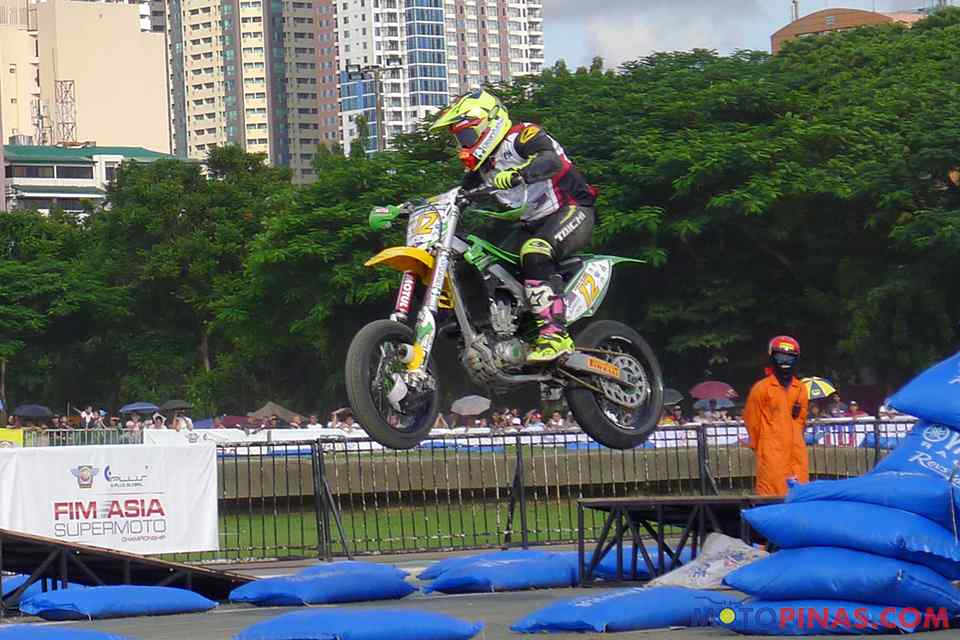 Running only a lightly modified motorcycle, he pointed out that his competitors all had the necessary racing upgrades to make their motorcycles more competitive.

One such upgrade he pointed out was the braking system, optimized to reduce brake fade over the course of a race. That alone, he says, cost more than a hundred thousand pesos. On San Andres's bike is a stock brake, necessitating him to care for and compensate during the race because of brake deterioration. His suspension system was also stock.

Even with all these setbacks, San Andres's fighting spirit remains strong. “Puso” (heart), the battlecry of the Philippine FIBA basketball team, Gilas Pilipinas, is the same mantra San Andres bears to heart.

We wish Kenneth the best of luck in the upcoming races in Indonesia, Singapore and Malaysia as he bears our flag. Read our tips on how to ride safer, more courteously, and more considerate of others in traffic.