Ducati recently announced the arrival of its latest ultimate superbike, the Panigale V4S. With the riding world already giddy with excitement the past few months, Ducati Philippines has finally brought the model to local roads. To experience the power and performance of the new model, Ducati Philippines invited select members of the media, special guests, and clients, to experience it at Clark International Speedway. 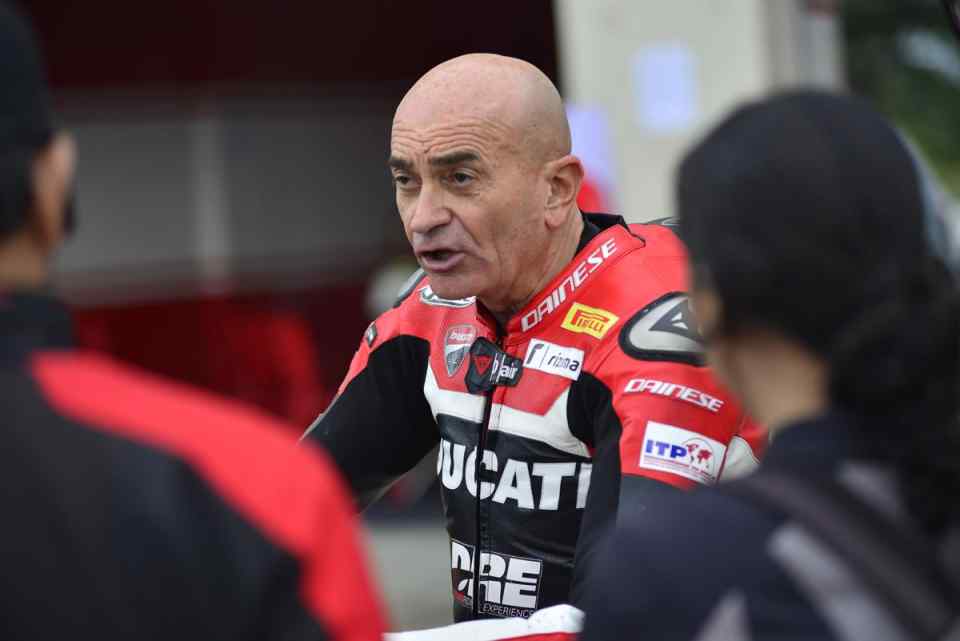 DRE's Director Dario Marchetti giving pointers to the media before entering the racetrack.

During the press conference, Dario Marchetti was asked how the new Panigale V4S feels contrast to the outgoing Panigale. “I came from a generation [with] no traction control, no ABS; your ABS was your hand while you brake. Now, thanks to these accessories (rider assist) it’s more easy. You can ride a very high-performance bike very safe[ly], very easy to ride. So it’s a wonderful bike.”

“I don’t think that everybody can ride a 210 horsepower bike on the track like that 10 or 15 years ago while tomorrow [with the new Panigale V4] everybody can ride and that’s exactly the difference between the bikes years ago and the bikes today. The [Ducati] V4 can give the riders the ability to ride a 214 horse power on the racetrack even with normal skills,” added Dominique Cheraki, Ducati Asia Pacific Markets Director.

Ducati Philippines also had reason to celebrate, as a few days before the event, they were awarded as the Best Importer in Asia – a testament to the ever-growing Ducati community here in the country. 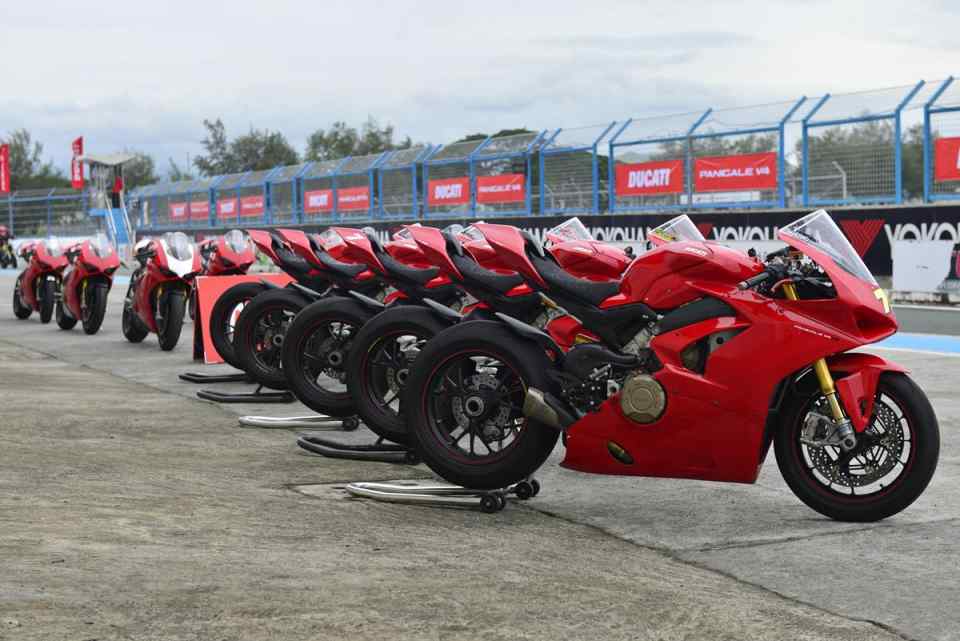 To give you some perspective, the new Ford Ranger Raptor bi-turbo produces 210-horsepower but it weighs 1,968 kilograms. The new Ducati Panigale V4 S has a claimed 214-horsepower and only weighs 195 kilograms fully fueled and oiled. We’re no math wizards, but it’s pretty obvious that the Panigale V4S has the upper hand in terms of power to weight ratio. Before I hopped on this gorgeous Panigale V4S, I couldn’t help but stop in awe and stare at the Panigale V4S’ beautiful curves – like a very gorgeous Lady in Red. 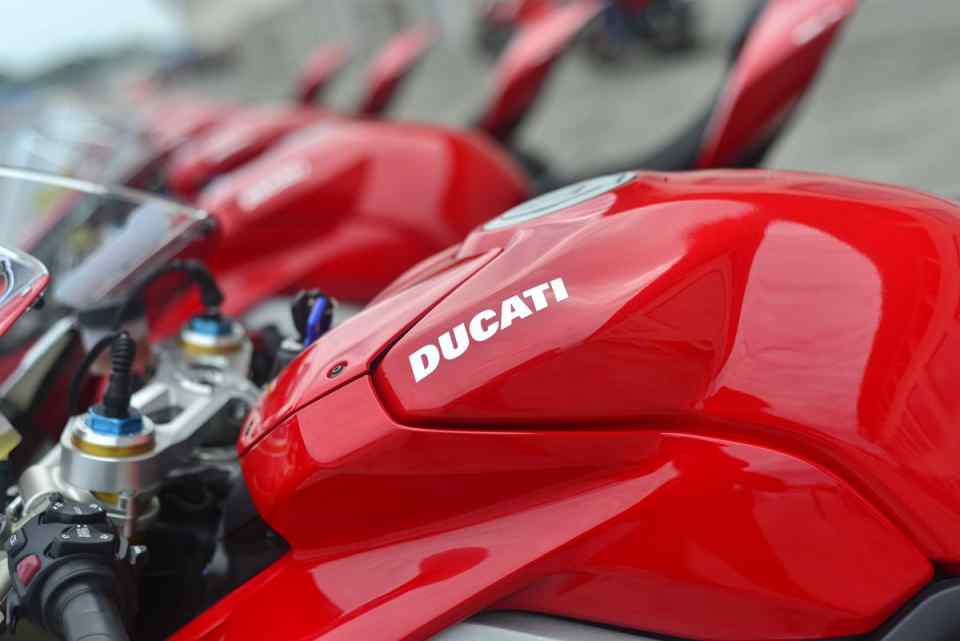 At first I thought the spark plugs were off or something, but it really takes a few revolutions to bring the new Desmosedici Stradale “MotoGP” engine to life. What surprised me is that, though the engine and the name suggests that it is supposed to be a 4-cylinder, it sounds like an L-twin – a very big L-twin engine. At 1103cc, it's almost as big as the BMW GS 1200 engine’s displacement (plus 2 more cylinders). The footpegs are said to be 10mm higher than the 1299, which some feel are much better for racetrack cornering. Engine braking can be adjusted too, with 3 settings.

A little research also revealed that the new Panigale V4S engine’s crankshaft is backward-rotating like most top-notch MotoGP racebikes are. Changing the direction the crankshaft turns theoretically negates the some of the inertia of the rotating wheels thus making the bike easier to turn and more stable on the corners.

As we entered the racetrack with Carlos, Rebecca, Dario, Federico and TJ, it was drizzling a little bit so we couldn’t push the bikes to their limits (as if my skills could push it - I'm only day dreaming). After a few laps at the CIS, it became evident that the Panigale V4S’ rider assist systems were indeed “assisting” the rider, not hampering him in each corner.

For example, instead of feeling the pulsating brake lever or pedal, it's just smooth sailing on the Panigale with its sophisticated cornering ABS; instead of losing power when losing traction on the rear, the bike just corners like nothing happened, but you know that the TC is actively working to save your butt. As for the suspension, a top-shelf Öhlins fork and shocks electronically adjust a hundred times per second to give the rider more and more advantages on the track. The Ducati Quickshift was also a gift from the heavens. No need to pull the clutch after take off. It also has launch and wheelie control systems, but I never dared to test them on this P2-million machine.

The author sitting on the Panigale V4S that WSBK Champion Carlos Checa used during the trackday.

Like most Ducatis, the bike still feels narrow in between your legs compared to most four cylinder superbikes. As mentioned earlier, the V4S's engine's crankshaft rotates backwards, which negates some of the inertia of the rotating wheels thus making the bike easier to turn and more stable on the corners.

Members of the media, ready for some track action during the Panigale V4 Experience.

Dominique Cheraki was right when he said that even an average rider like me could ride the new Panigale V4S like an experienced track rider thanks to its wide array of computer aides that help [read: not hinder] riders achieve their best lap times. 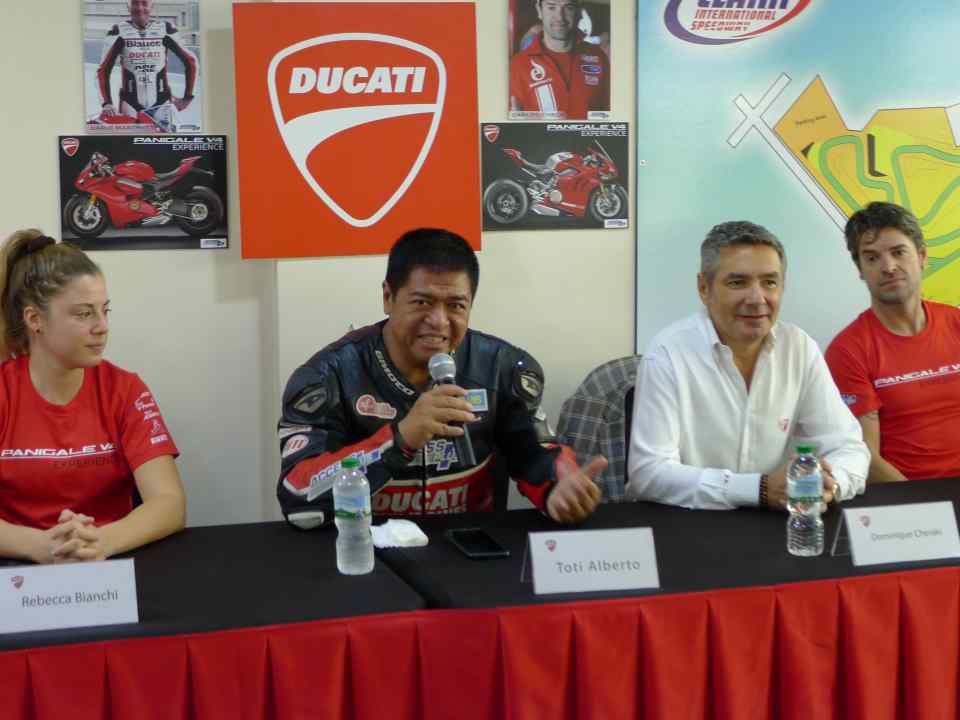 I have to agree, if the Panigale V4S can make an average rider like me perform like a “pro”, then what more if he’s already a pro rider?

Santa will really have his list full of wishes from overgrown boys this season.

We look back at one of our most memorable rides last march, to Quirino Province, home to incredible roads and even more intriguing sights.