If every mountaineer yearns to summit Mt. Pulag, every triathlon the Ironman 140.6-km challenger, then for every rider, there's the BOSS Ironman Motorcycle Challenge.

The BOSS Ironman Motorcycle Challenge (BOSS IMC) has established itself as a calendar riding and driving endurance challenge here in the Philippines, even attracting motorcycle riders and car drivers from all over the globe. For the past 14 years, it has served as the proving ground for motorcycles in terms of reliability and riders in terms of endurance and navigating skills. After all, the route is made up of 1,200 kilometers of Northern Philippine roads. This event is also a partner of the Department of Tourism in helping promote the beautiful towns and cities along the designated route. 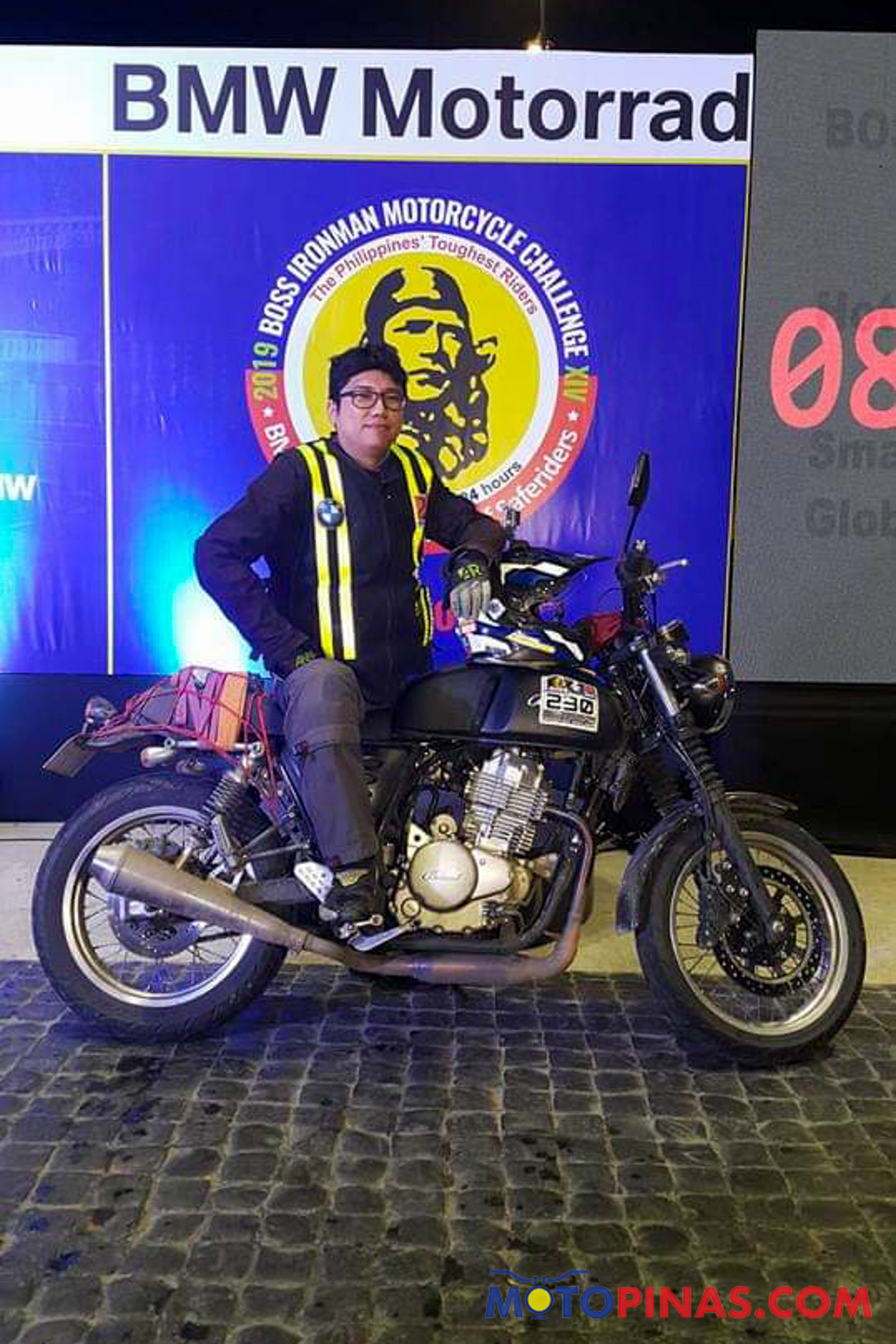 What is the BOSS Ironman?

The BOSS Ironman Challenge started in 2005, inspired by the Iron Butt Challenge of the US, where riders must traverse 1,000 miles within 24 hours as a test of endurance. The Philippine edition challenges participants to take on a 1,200-kilometer ride within 24 hours, with the Northern Luzon Loop as the route. Since its inception by the BMW Owner's Society of Safe Riders (BOSS), the challenge has since been opened to any adventurous rider, and later on, cars in the years that followed.

While the challenge is to finish a designated route, usually more or less 1,200 kilometers, within 24 hours, BOSS stressed that all traffic and safety laws should be observed at all times. In addition, participants must complete the challenge no sooner than 16 hours, and not more than 24 hours.

To showcase the ruggedness and reliability of their bikes, Bristol Motorcycles, fielded four bikes entries for this year's Ironman Challenge. Taking on the route were Oliver Navarro, Jay Francisco, Bong Diaz, and yours truly, calling ourselves the Bristoleros.

We were the underdogs of the event, considering that entries for the BOSS IMC are typically motorcycles with 1000cc and above displacements. Our Bristol bikes, were powered by the minimum requirement of 400cc engines.

Despite entering as a group, we were given different entry numbers, and not consecutive numbers as we had hoped. This meant we would be flagged off at different times; the lower your number the sooner you go. The initial plan was for us to regroup somewhere along the way before reaching the first check point in Vigan almost 400 kilometers away. One of our riders, Oliver, was determined to finish just a little over the 16 hours minimum time allowed. 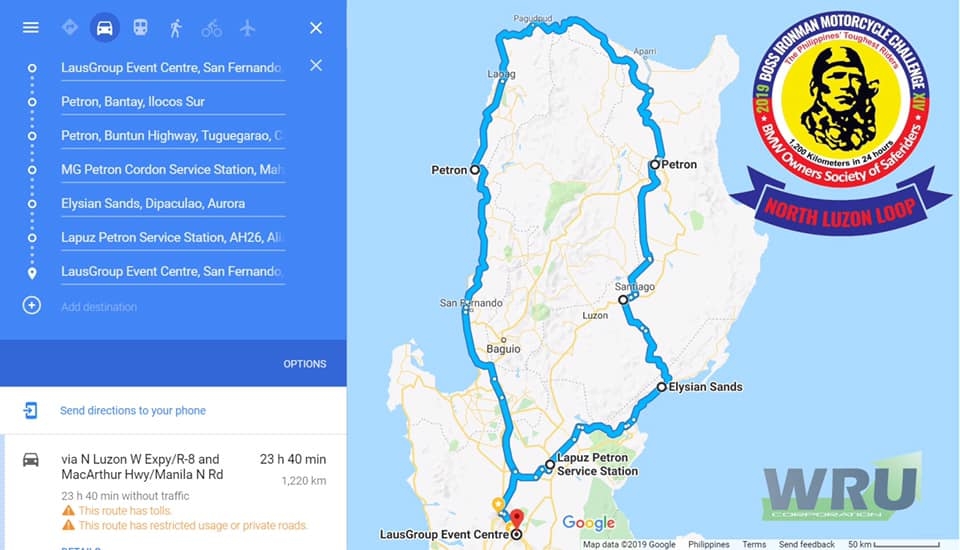 This year’s BOSS IMC route starts at the LausGroup Event Center in San Fernando Pampanga. It's then 340 kilometers straight north to Petron Bantay, near the Heritage City of Vigan, for the first checkpoint. It's another 376 kilometers to Petron Jerico in Tuguegarao for the second checkpoint. Continuing the loop, it's 143 kilometers down to Cordon Isabela through Enrile Cagayan for the the third checkpoint at Petron Cordon. We then pass through the beautiful Quirino Province, down to Dinadiawan, Dipaculao Aurora for about 113 kilometers for the fourth checkpoint at Elysian Sands Resort. We ride 148 kilometers to Petron Talavera in Nueva Ecija for the fifth and final checkpoint before heading back to the LausGroup Event Center in San Fernando Pampanga for the finish line for a total of more than 1,219 kilometers.

The riders were flagged off according to their registered numbers at the Laus Group Event Center in short intervals, starting at 10 pm. The ride between San Fernando to Bantay, Ilocos Sur (340-km) was uneventful and my bike only consumed 12 liters of fuel, roughly 28 kilometers per liter on straight highway riding, traversing NLEX, SCTEX and TPLEX.

This Bristol Classic 400i proves once again that it is a perfect and economical riding companion especially on a weekend getaway where you will be using the expressways. Not once did I encounter an expressway officer questioning the legality of this motorcycle, being a 400cc and looking the part, too.

After the expressways, it was back to the Pan-Philippine highway with all the pedestrians, tricycles, unruly jeepneys and even dogs! Good thing the Bristol Classic 400i was as nimble as a 150cc standard bike, making safely weaving through the obstacles in the national highways easier versus bigger displacement and heavier motorcycles. It was raining from Bangui, Ilocos Norte down to Tuguegarao; then from Maddela to Dipaculao where the winding roads are slippery.

I was still tailing my Bristoleros comrades by the time I entered the town of Bangui, Ilocos Norte. Good thing I was joined by my other riding friends riding at the same pace. At this point, it started to rain, making for a very cold and long night. We had to stop at a small store in Claveria, Cagayan to sip a hot cup of coffee to warm our bodies. Lucky for them, they had brought their rain gear with them. Mine, unfortunately, was still in my tool bag that I had left at the hotel room. Thanks to my off-road riding experience, I decided to modify a garbage bag into a make-shift raincoat to keep my body heat up and survive the cold. After the cup of coffee, we headed out once again. Despite the very cold starting temperature, the Bristol Classic came to life with just one-click start thanks to its electric starter and EFI system. All wet, we headed straight to Tuguegarao for the second checkpoint. 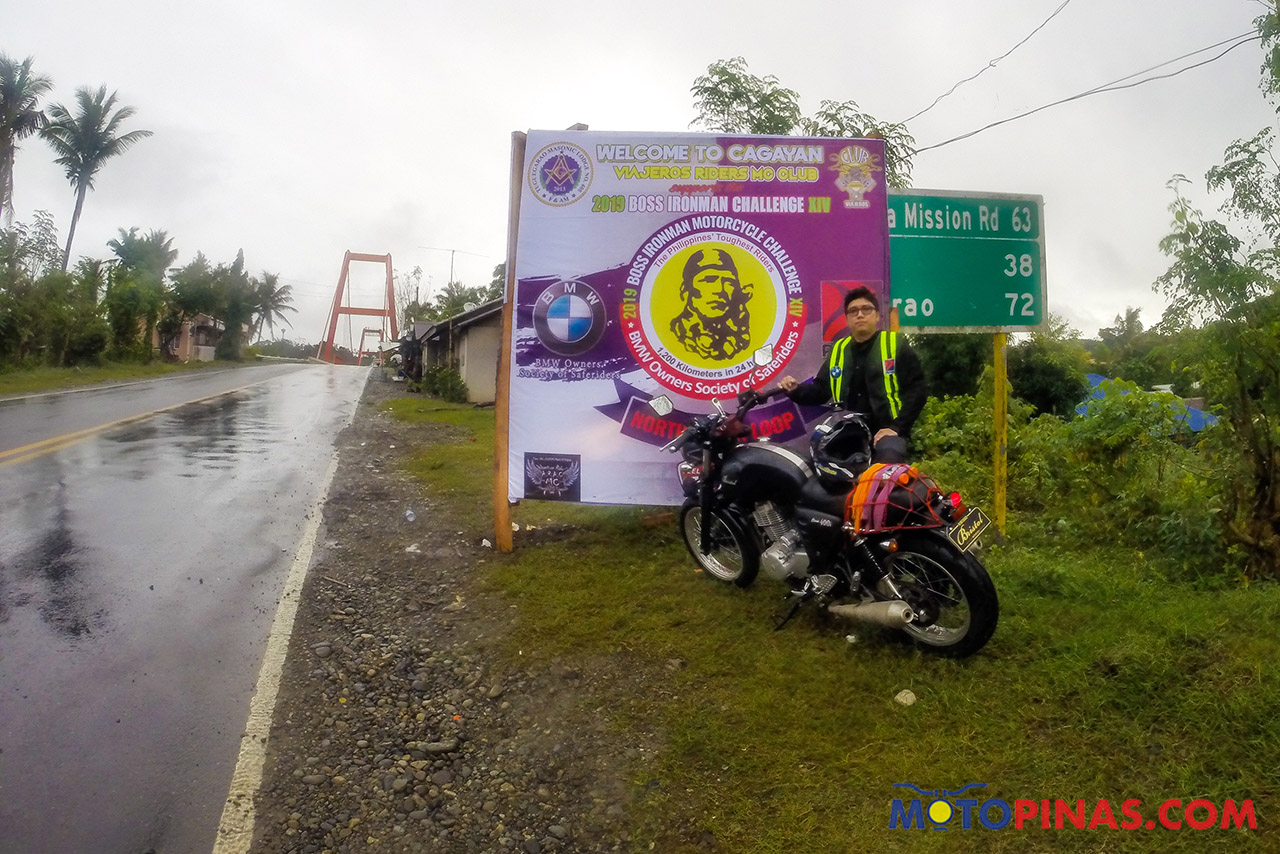 There's no Ironman checkpoint here, but the Viajeros Riders Motorcycle Club who offered food and drinks to the participants - for free.

By the time we got to the second checkpoint in Tuguegarao, I only consumed another 12 liters of fuel. It's impressive considering that this stretch from Bantay, Ilocos Sur to Tuguegarao is is farther (386 km). The Bristol Classic 400i improved its fuel economy, moving up to 31 kilometers to a liter! (My regular 250cc off-road motorcycle consumes 28 kilometers to a liter). As the sun was up and shining, we trotted down to Enrile, Cagayan and to Cordon Isabela for the third checkpoint. This Bristol Classic 400i again had racked up 31 kilometers per liter in fuel economy, running at 80-100 kph on open stretches. 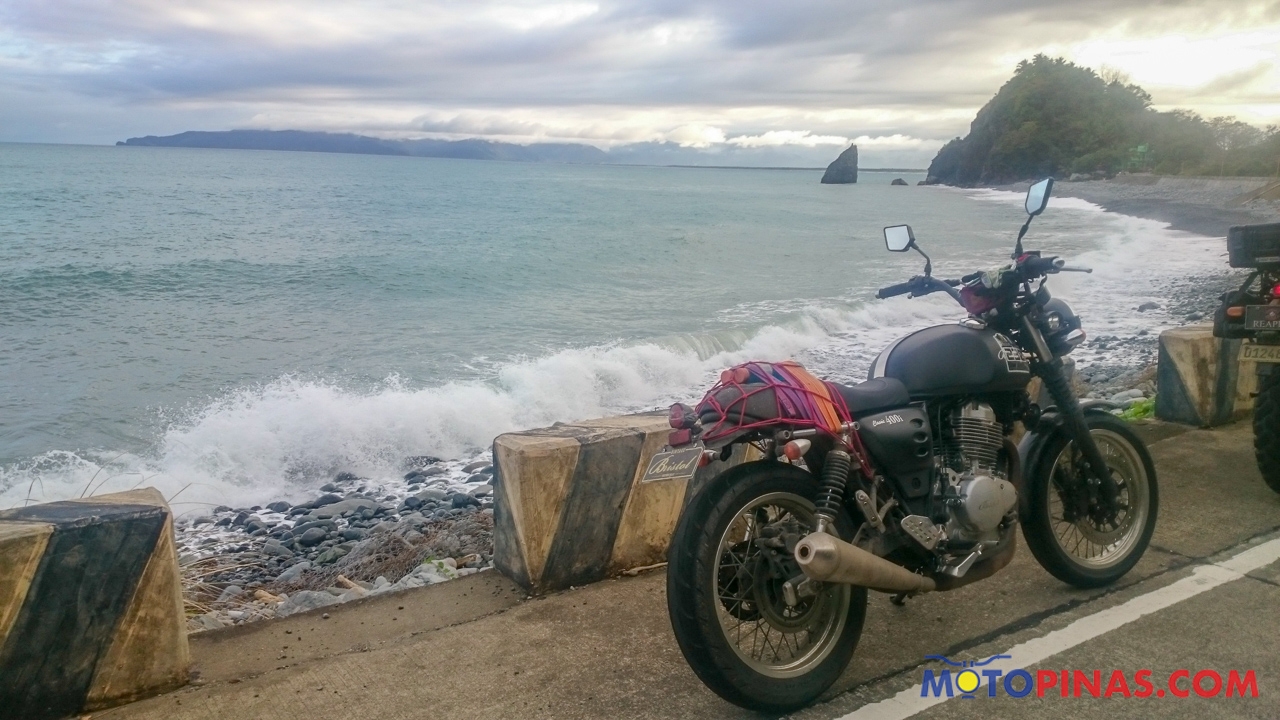 The beautiful shoreline of Dipaculao, Aurora.

By the time we reached Elysian Sands (fourth checkpoint) in Dinadiawan, Dipaculao, Aurora, it was only minutes before sundown. Oliver had already checked in at the finish line a few hours ago. He had even bested motorcycles with bigger displacements than our Bristols. Bong Diaz at the finish line

As for us, we just took it easy on the winding and slippery roads of Aurora back to the flat lands of Nueva Ecija until the finish line at the LausGroup Event Center in San Fernando Pampanga. Overall, me and my new-found riding mates completed the 2019 BOSS Ironman Motorcycle Challenge in 22 hours, 18 minutes, riding with rest and snack stops along the way. 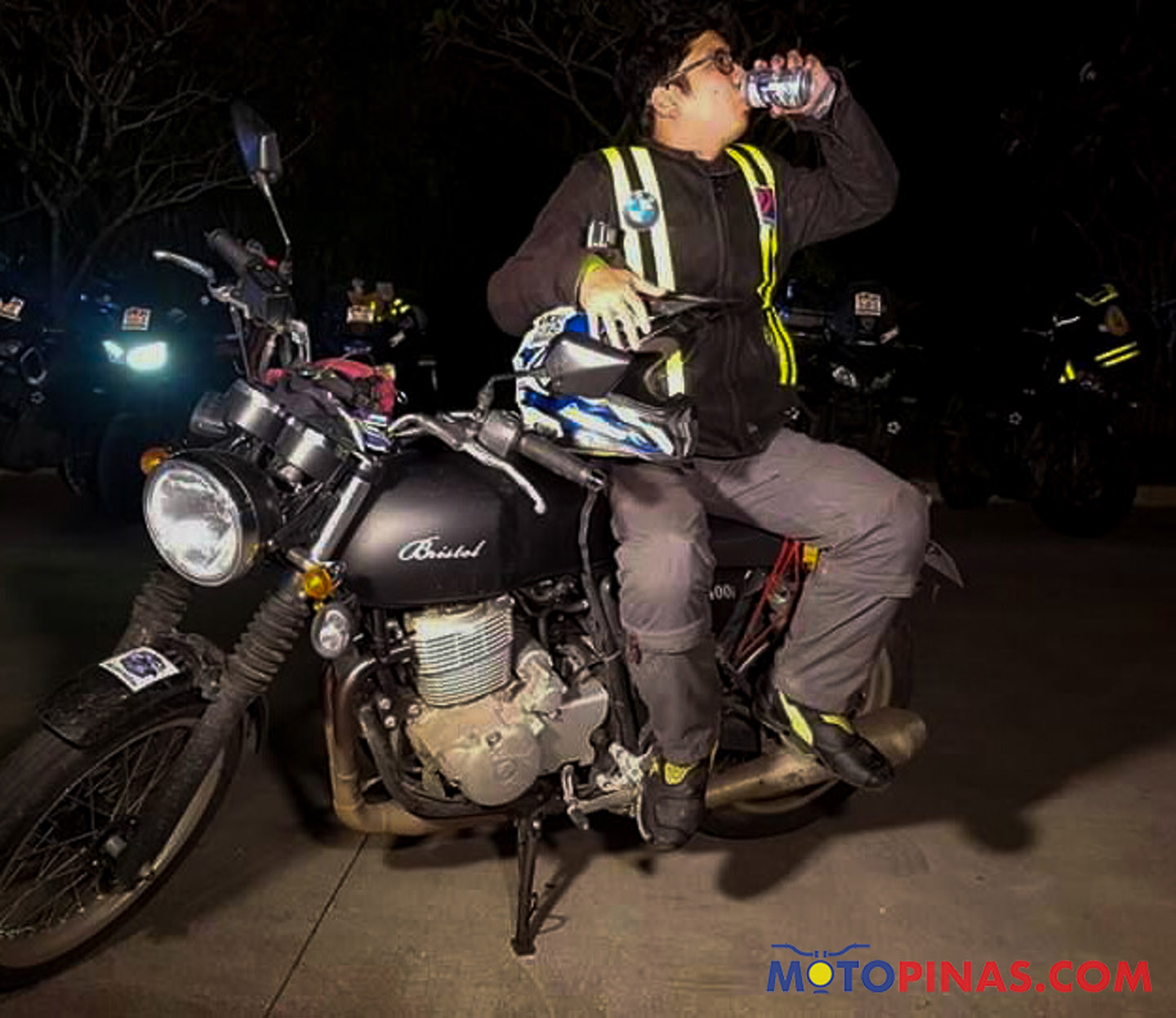 Mandatory beer after the ride. (Note: no more riding beyond this point)

All Bristoleros finished the 2018 BOSS IMC with ZERO breakdowns and within time allowed by the organizers. This proves once again that Bristol Motorcycles are a reliable and economic riding buddy for everyday, weekend or even motorcycle endurance events such as the BOSS IMC. “We assure that our customers always have the parts available at the shop. We even go the extra mile of going to their places to tune their Bristol Motorcycles,” said Andrew Sy, Operations Manager for Bristol Motorcycles Philippines. “Its heart is the Taiwan-made Hartford powerplant which is also being used on motorcycles in Europe and in the USA and now tested and proven here at the 2019 BOSS Ironman Motorcycle Challenge” he added. These Bristol Motorcycles may have been designed for leisure riding but it proved to be a worthy companion in this year’s BOSS Ironman Motorcycle Challenge. Take a peek at what's to come from the bikes exhibited at the Thailand Motor Expo.