Known for their resonant burbles, long wheelbases, wide turning circles, heavy weight and gobs of power, cruisers aren’t the easiest of bikes to break into. There will be quite a lot of adjustment, whether you’re coming from another kind of bike, or hopping in fresh. Still, it’s easy to see why the bike, its lifestyle, and reputation are appealing to so many. The denim, chrome, tattoos, chains and lots of leather being seem like unofficial pre-requisites to own and ride a Harley.

Yet that’s all about to change, both for Harley and those looking to buy one. Serving as Harley-Davidson’s envoy to a new and possibly more profitable market segment is its Street 750 model. Designed to be enjoyed in the city and by riders new to cruisers, the Street 750 hopes to ease them in to the proud American brand, and possibly up to bigger and better bikes in the future. 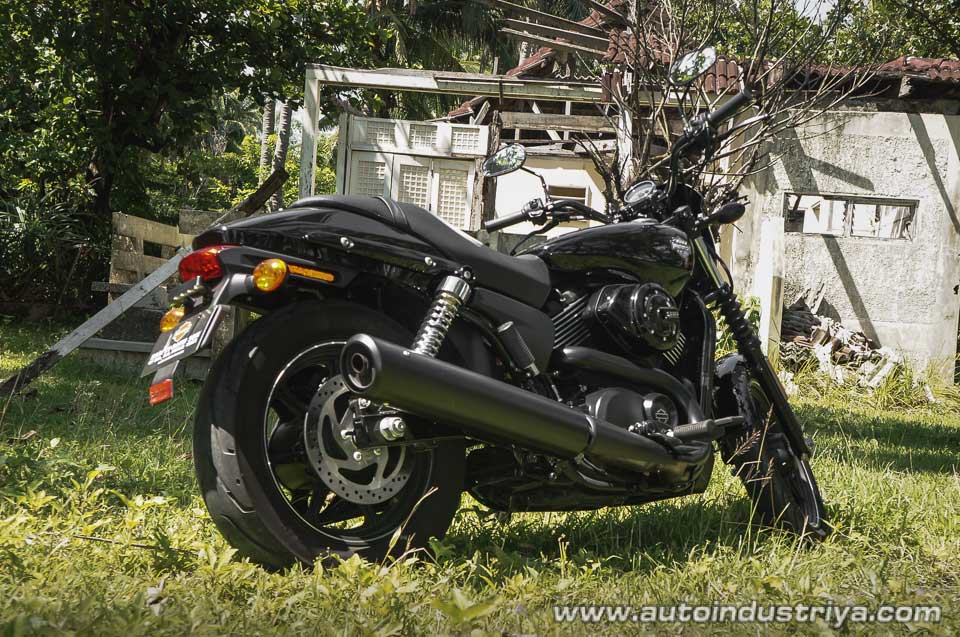 The Street 750 is one of Harley’s smallest bikes, with the Street 500 serving as the base variant. To begin with, it’s both very familiar and all-new at the same time. There are several hints of the Harley character in the way it looks and rides, with some changes too, like the water-cooled engine and smaller size.

Harley purposely designed the bike to be bereft of the chrome, sissy bars and a loud exhaust. It’s inspired by Harley Davidson’s Dark Custom line of accessories and apparel with the amount of chrome tastefully reduced in favour of a matte black finish. It’s meant, after all, to appeal to urban riders that have to navigate heavily trafficked streets, tight turns and narrow parking.

That said, there’s 3.5 inches of rear wheel travel and 5.5 inches up front from a 37mm fork, giving the Street more than double the travel of its Sportster cousins while maintaining a low seat height. The shorter wheelbase and skinny 100 mm front tire make it easier to change direction too.

Yes, it still has the Harley shield, the low seat posture and even the V-Twin engine. There’s hints of the V-rod’s design with its low seat height, tank mounting, and matte exhaust. 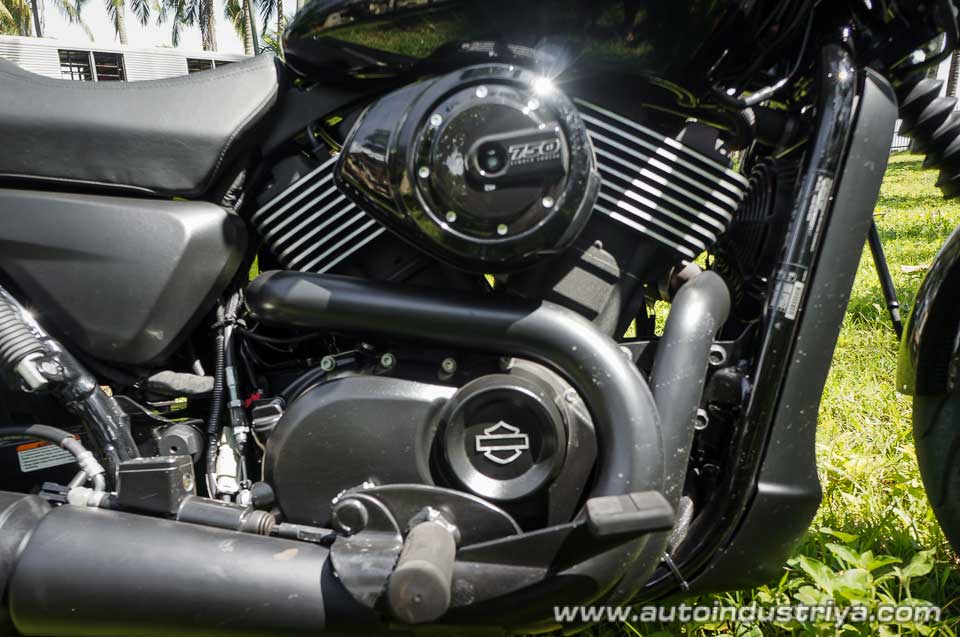 As the name suggests, it’s powered by Harley’s 750 cc engine. The tiny (in context) twin is liquid-cooled, SOHC, four-valve per cylinder and is fuel injected. It’s still belt driven with a powerband that delivers torque from 2,000 to 8,000 rpm. A six-speed gearbox brings it up to speed. It’s no featherweight, tipping the scales at 222kg with all the fluids, yet still far lighter than most Harleys.

Finally, the ergonomics have clearly been designed with Asians in mind. It’s easy to swing a leg over the low rear. The handlebars are an easy reach. Knees are at just the right height to hug the tank. Finally, there’s still a bit of clearance underneath to roll over pock-marked roads.

Our time with the bike allowed us to take it in the city and onto a short jaunt out of town. In traffic, the bike’s narrower width made it easy to squeeze in between cars. Plenty of torque in the low range also provided the grunt to get up to speed from a dead stop. Exhaust fans also occasionally turn on to keep the temperature down. Though like the other Harleys, the heat between the legs can be pretty hard to bear over long periods.

It was over a longer ride that I got to really stretch the 750’s legs. Despite riding with dual sports and sport bikes, the mounds of power of the engine allowed it to keep up easily. The shifter is still thankfully very tactile and mechanical in feel. It had great straight line stability, even at high speed, yet was easy to lean as well. It’s no sport bike though, and while it handles mild, sweeping turns fairly well, you’ll find yourself scraping the peg on tighter ones — though that’s to be expected of a cruiser. The long travel suspension soaked up bumps very well, making the road feel practically as smooth as silk. 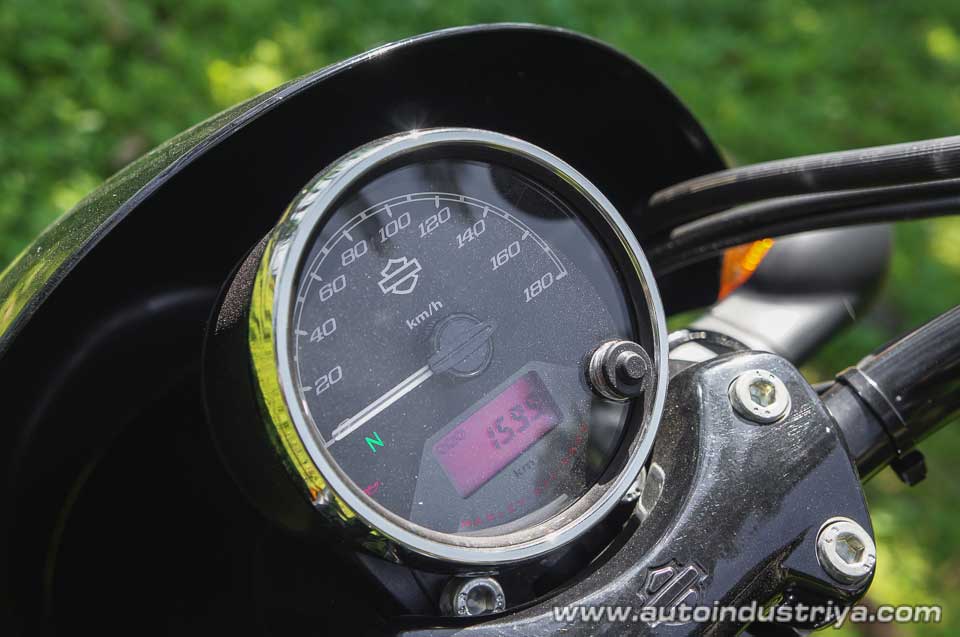 Of course, there are also a few concerns with the bike. For one, it’s equipped with a fairly bare instrument cluster. Up front is just a speedometer with an odometer and trip meter. There’s no fuel gauge, just a low fuel light, making it hard to gauge just how far the bike will go. It’s also thirsty, sipping 20 km/L, particularly with just an 13-liter tank. You'll find yourself fueling up at every stop out of paranoia. Though that should be more than enough if used just within the city.

The front brake returns vague bite and feedback, forcing you to rely more on the rear. Another concern are the mirrors, which give a good view of the sides, but none at all behind. Finally, there’s the exhaust; perhaps one of the most prized trademarks of a Harley. The standard pipe does little to show off the V-Twin’s distinctive sound, which is a shame considering the brand’s reputation for it.

Many of these matters like the mirrors and exhaust can easily be addressed with Harley’s extensive line of aftermarket accessories. I’d opt for mirrors that stretch farther out and Screaming Eagle exhaust. It's unfortunate that these shortcommings weren't addressed in stock form.

Over the long ride in and out of the city, it’s evident that the Street 750 is an ideal bike for those that are just starting to learn to ride or moving from another type of bike into a cruiser. At just under PhP500,000, it’s affordable, easy to ride, agile, and also quite forgiving. The riding dynamics are easy to master in just a few hours and the power is more than enough. And perhaps the bike's quirks and many of the aspects it lacks will train you to be a better rider.

I remember first riding a big bona-fide Harley (Fat Boy Lo) was challenging and intimidating experience. Now with the Street 750, it’s easier to slip into. Yamaha Bolt could very well be your first cruiser bike.