With a rich heritage and reputation for style and performance, few would have suspected Ducati to revive the scrambler motorcycle segment — the predecessor of the modern motocross segment. Yet Ducati's example of a scrambler is what typically comes to mind when it's brought up.

Long before the light motocross bikes of today existed, scramblers were modified road motorcycles fitted with longer travel suspension and semi-knobby tires to go hare scrambles racing over rough terrain. Scramblers eventually evolved to motocross racing, with more extreme tracks and purpose built bikes. While there have been attempts to bridge the gap between off-road and on-road bikes with dual sport and adventure bikes, many still pined for the sleek, minimalist look of the old scramblers. 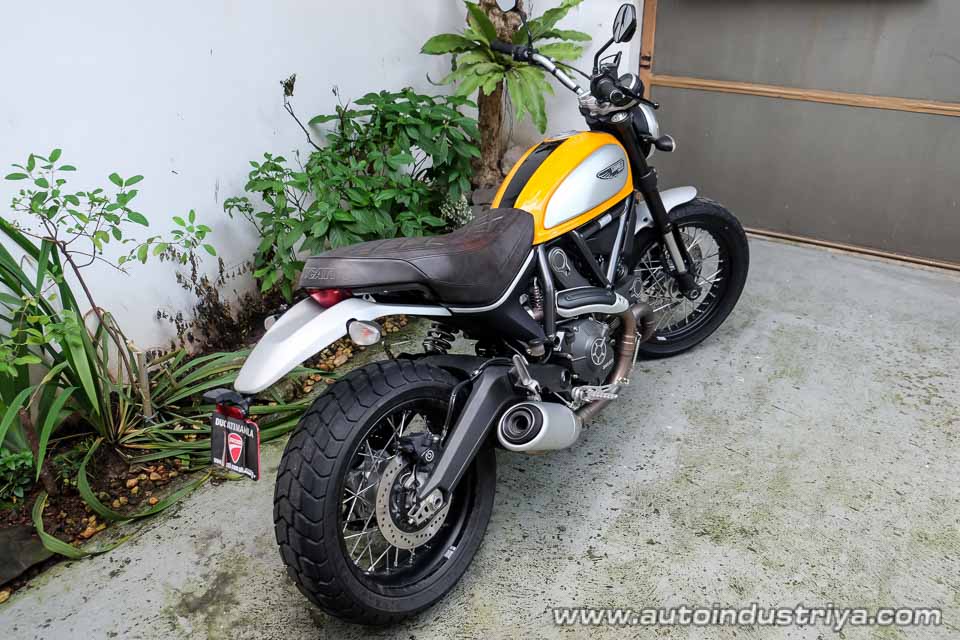 Triumph was the first to attempt to revive the aging style with its Scrambler in 2006, but it was warmly received. It was Ducati's interpretation — blessed with a contoured seat, low mounted pipe and snaking headers — that made motorcyclists sit up and take notice.

The styling had just the right amount of classic nods and modern cues to allure without alienating. It also helped that it was offered in several trims, from the Classic, to Urban Enduro, Sixty2, Icon, Dessert Sled and Cafe Racer. Besides the trim styles, the bike was also offered with a choice of 400cc and 800cc engines, with a whole host of optional accessories. 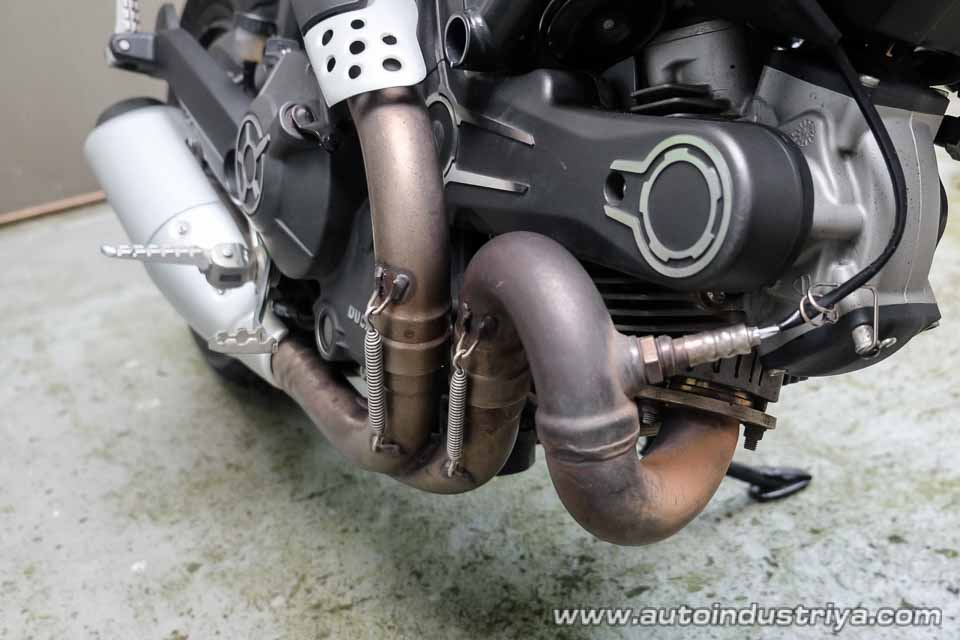 Whichever you choose, it's easy to appreciate the care Ducati has put into its headers that beautifully curve and bend to form the exhaust. The retro headlamps integrates clever LED daytime running lamps. If you opted for the Classic, the quilted seat is a work of art on its own.

Ducati's renown for performance and styling aside, the doesn't just woo with its style. It's remarkably easy to ride. Hop onto one from a cruiser, sportbike, adventure bike or even scooter and there's very little to adjust to. The seat height is agreeable to most riders regardless of stature. The weight is just right for most to handle. The controls are standard fare, with a novel sliding cover for the starter, doubling as a kill switch. 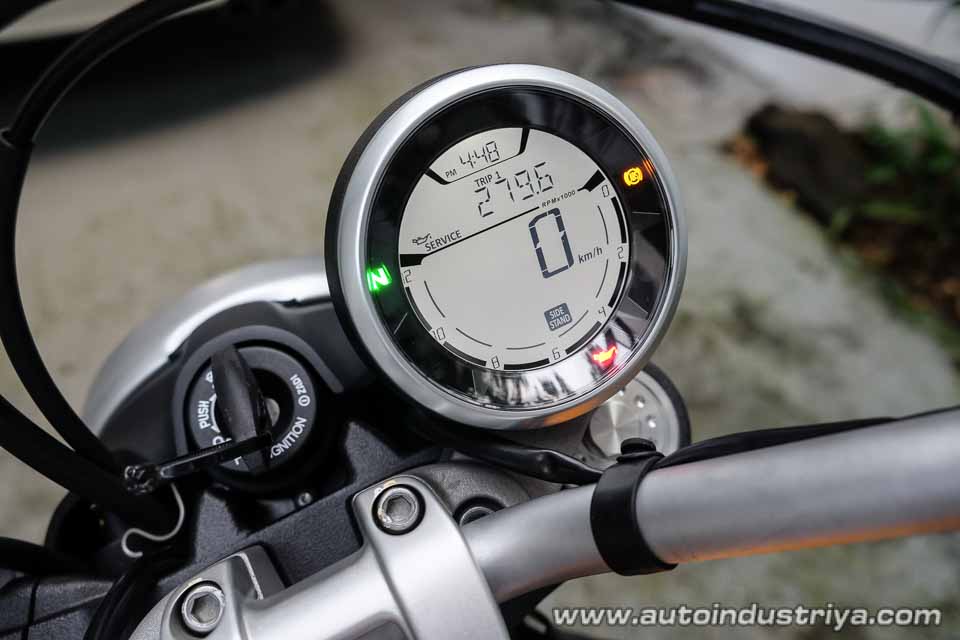 All of the information is easily gleamed on the single, off-center digital multifunction gauge. It shows everything from the tachometer, speed, warning lights and engine temperature. The display can be configured with controls on the left stalk. Unfortunately, there's no fuel gauge, just fuel range and a warning light once it hits the reserves.

The riding position is standard and is easy and comfortable even after hours on the saddle. Being based on the Monster, the handlebars don't turn as far as you'd expect. Many complain about the steering's wide turning radius, yet this never comes into play when already on the road. It's more than enough to maneuver with in traffic, though not as agile around very tight spaces in traffic as adventure or motocross bikes. Thankfully, the high handlebars and mirrors will more than clear most sedans' mirrors, its width manageable for squeezing through traffic.

With an 803cc engine between the legs, the instant torque low on the rev range is surprising, yet also particularly handy to dart ahead of traffic. The exhaust is fairly quiet, and as such, it's likely this will be the first thing many buyers will change. There's lots of usable power right up to 10,000, though aerodynamics will be your biggest problem at highway speeds.

In spite of the semi-knobby tires, the Scrambler feels pretty surefooted even on tarmac. It's easy to lean and will gladly keep pace with sport bikes. They might not grip to the ragged edge but will certainly be enough for most. These tires work even better in wet and muddy roads, clawing for grip better and returning more confidence to the rider where others would slow down. 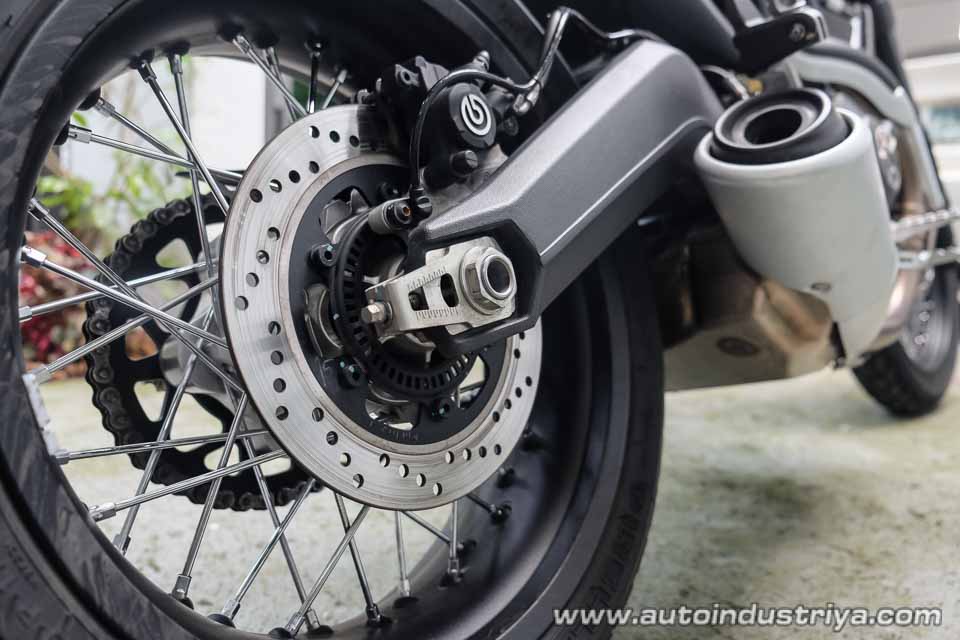 Perhaps the biggest boon is the standard Brembo ABS and traction control fitted in both the 400cc and 800cc models. Grab as hard as you like, the brakes will bring the bike to a drama-free stop even over sandy roads.

As a result, it's not surprising to see so many Scramblers as a first choice for riders moving up from smaller displacement standard bikes and scooters. It rewards with its simple yet intuitive controls, great balance, and phenomenal handling, setting the bar high for those that only originally envisioned it as a transition bike.

The Scrambler will gladly tackle smooth asphalt, rough roads, or even a little bit of dirt with ease. And thanks to a broad selection of parts and accessories, can easily be transformed to be a show-winner, touring contender, or simply your own definition of what a Ducati should be.

Vintage Electric bicycles purvey nostalgia with an EV twist, out of sunny California We take the Royal Enfield Continental GT for a test ride and see how it fares on a daily basis.