Many riders dream of traveling around the country on their bikes, and this can be made easier through the fast and safe expressways. However, with the current rule that limits expressway access to bikes 400cc and above, that dream is often put at risk when riders are forced to use national roads instead where there are counterflowing tricycles, jeepneys, undisciplined pedestrians and even animals crossing. 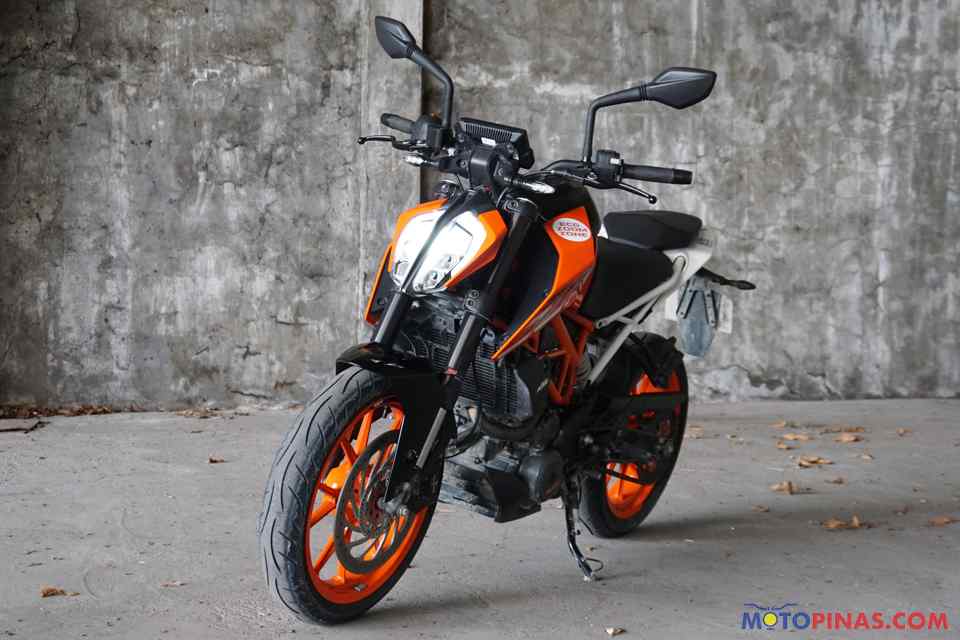 One bike that has brought that dream a little closer is the KTM Duke 390, being expressway legal and relatively within reach with its pricetag of P260k. That accessible pricetag is the result of the Duke 390 being assembled at Ayala Corp’s IMI facility in Laguna since 2017. 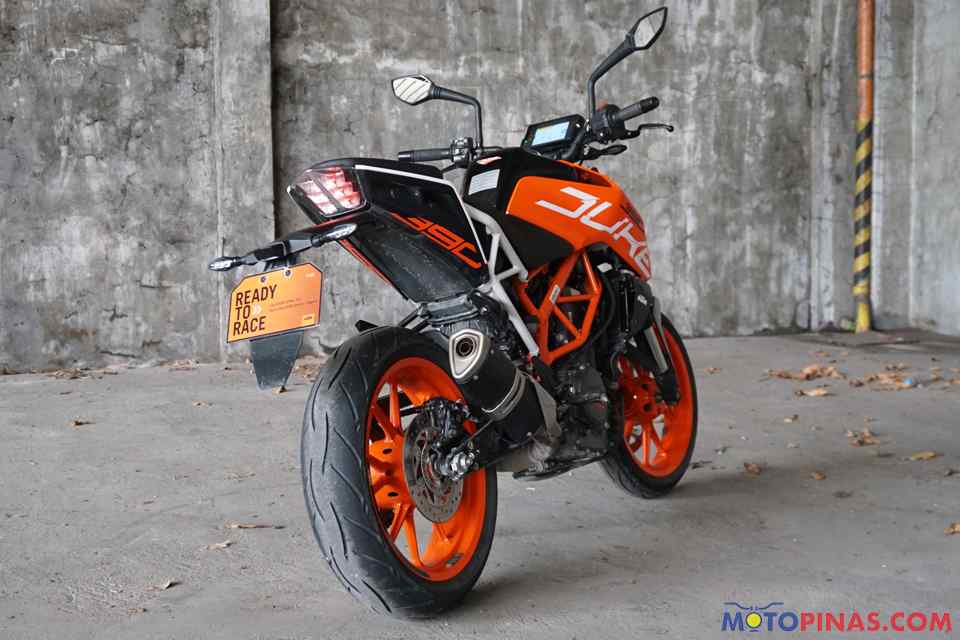 I had first glimpsed the Duke 390 at the opening of KTM’s premier shop in Dagupan, Pangasinan. It was also the first time for me to try it out, albeit only for a quick stroll around town. Since then, I kept thinking about it, and through the generosity of our friends from ECG Zoom Zone, I was able to bring home the very same bike when I was in Baguio last month for the Shell Bike Fair. 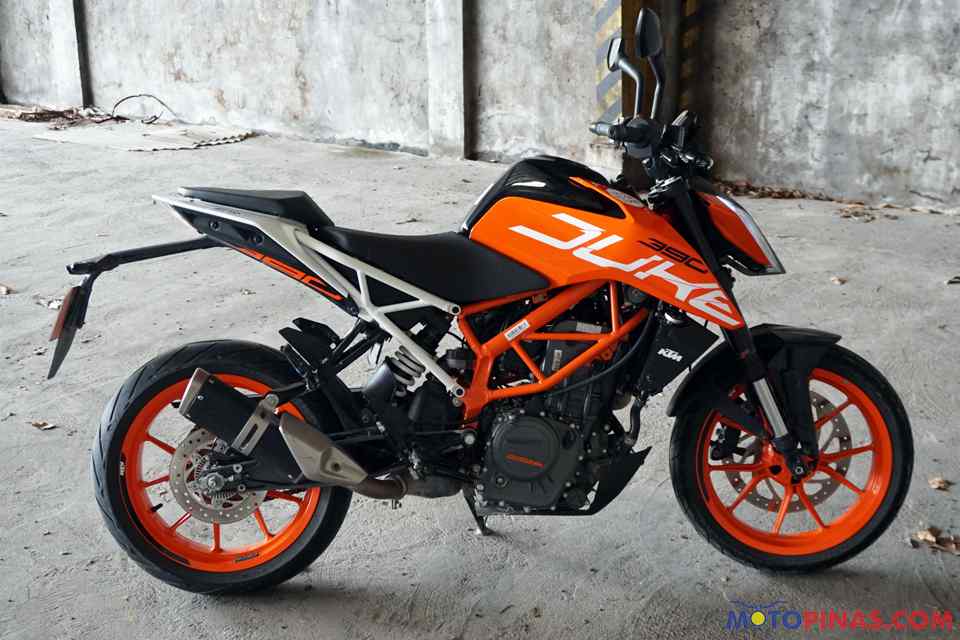 What I really liked about the Duke 390 is its design that closely resembles its bigger sibling, 1290 Super Duke R. Unlike many Japanese bikes that were supposedly “designed directly from (insert flagship sportbike here)”, the Duke 390 looks at least 90% like its halo model sibling.

Just look at the Duke 390’s front face and you’ll understand what I’m trying to say. 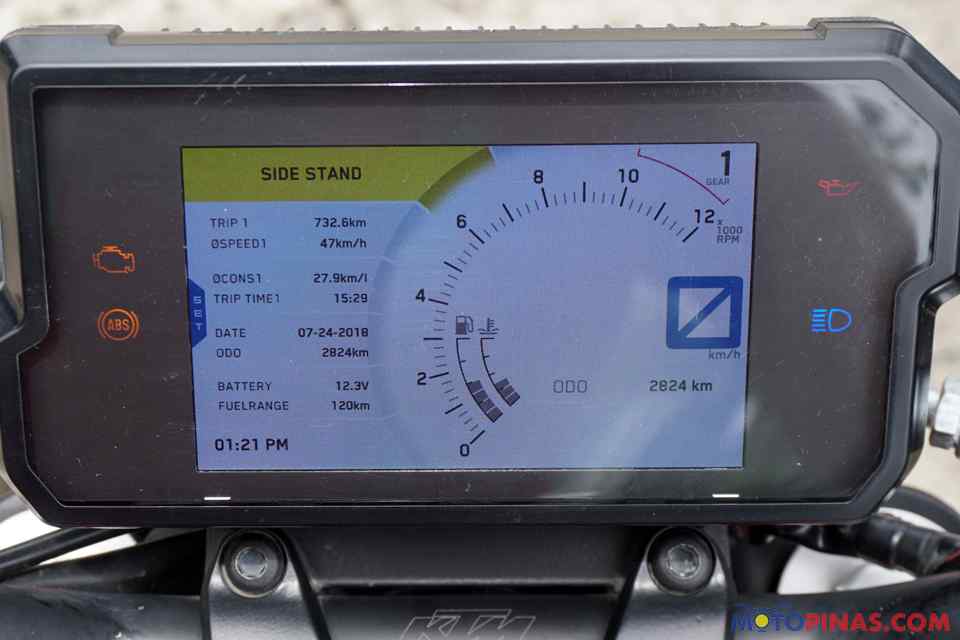 Another thing that I liked about this motorcycle was the light-sensitive TFT screen (changes the backlight color depending on outside conditions). 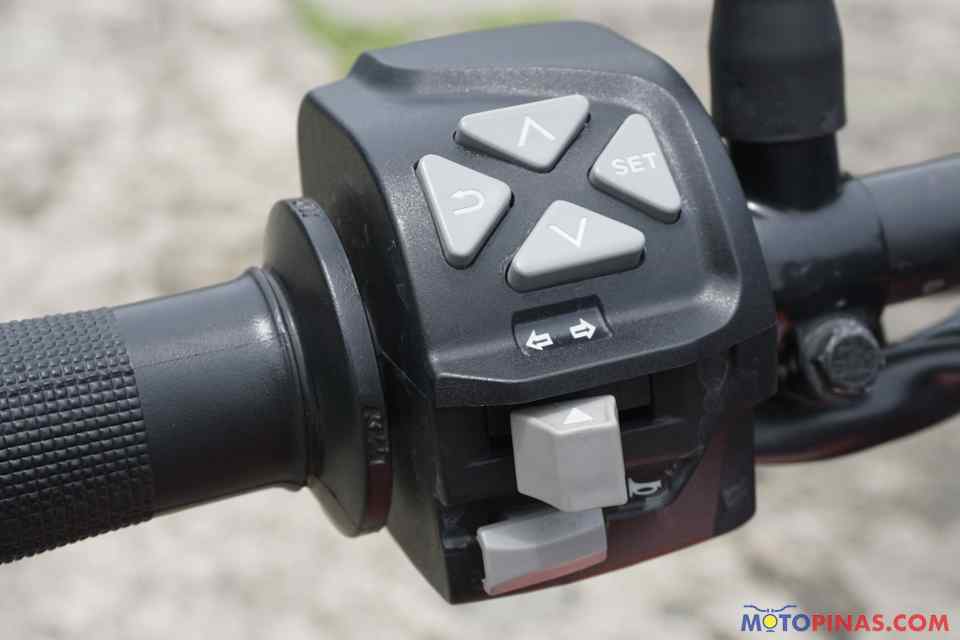 It is the first “true” TFT screen on an entry-level bike which can be toggled through 4 buttons at the left handlebar. Both the clutch and brake levers are fully adjustable just by a quick turn of the dial tuner.

At 830mm seat height, some individuals may find it tall, but given the Duke 390’s super lightweight feel, even a lady rider will not have a hard time balancing the bike on full stops. 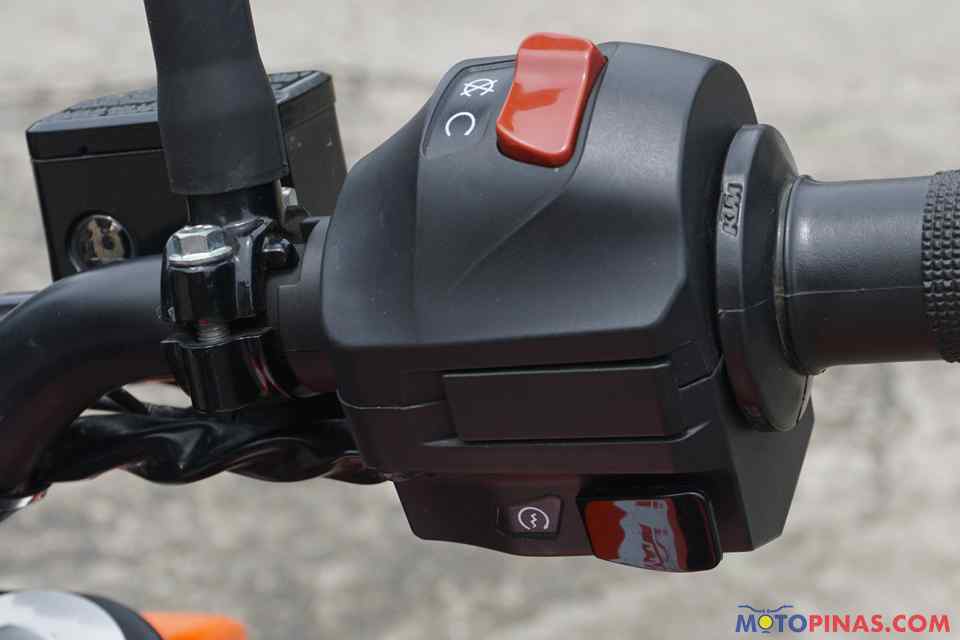 Did I mentioned that the Duke 390 is now ride-by-wire? The technology, popular in cars and airplanes, was previously unheard of on this motorcycle category. It immediately translates power from every twist of the throttle yet is so smooth that beginners will not be intimidated. 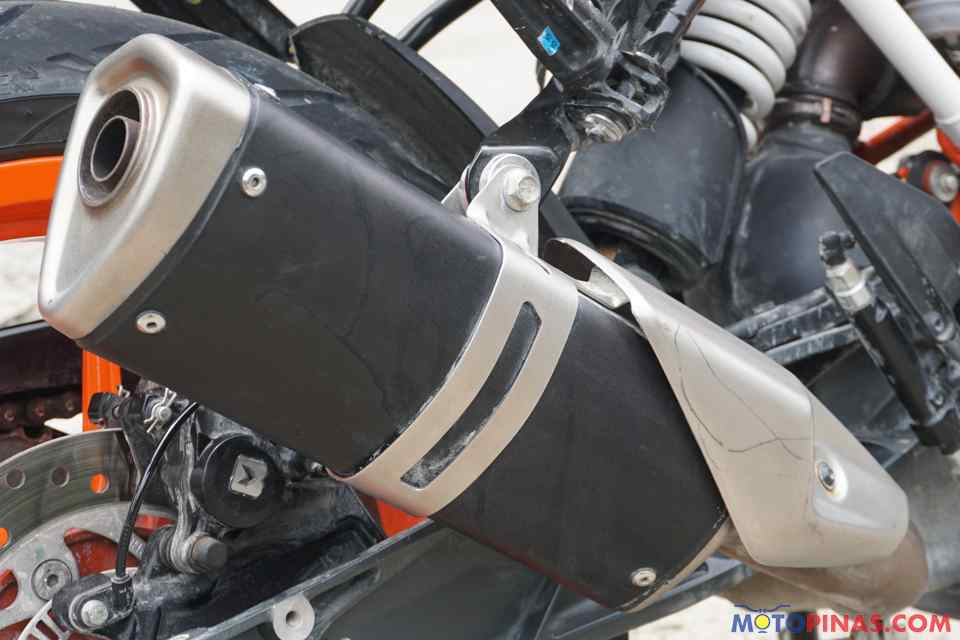 The new Duke 390 also has a better-looking sporty exhaust than the outgoing model. 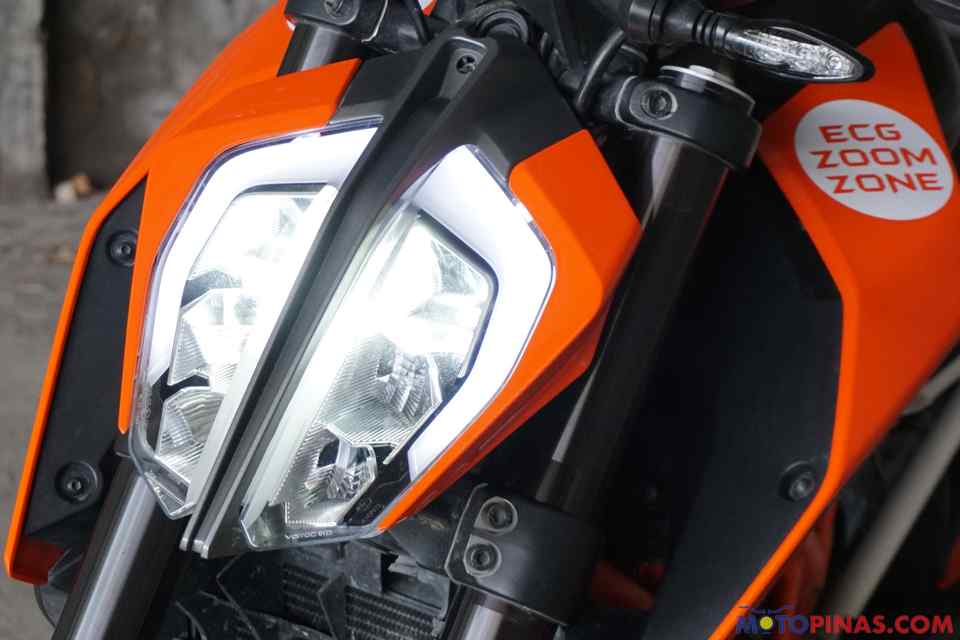 Best of all are the LED headlights. I can’t even find the words to describe just how beautiful they are. 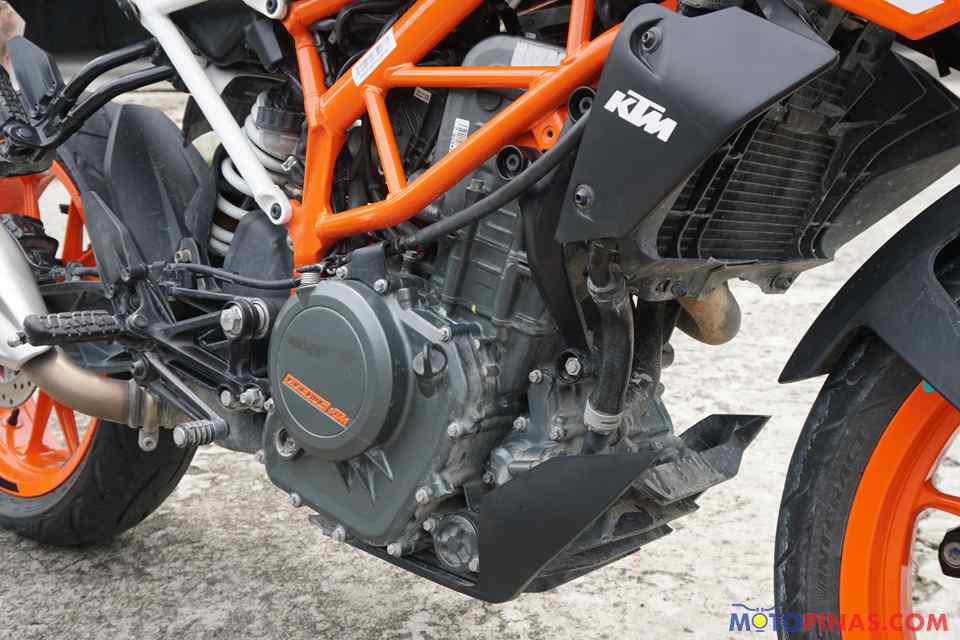 The Duke 390 is powered by a liquid cooled 373.2 cc four-stroke, single cylinder twin cam engine that produces 44 horsepower. To put it in perspective, the Suzuki Multicab that plies the streets in various applications and configurations only has 30hp, and on average weighs 700kg. The Duke 390 on the other hand weighs no heavier than Kawasaki’s NS200 and is just a tad heavier than Yamaha’s FZ 16.

The engine’s sweet spot is between 6,000 to 8,000 rpm then redlines at 10,0000 rpm. The engine is mated to a 6-speed slipper clutch transmission, another feature not typically found on a P200k motorcycle. 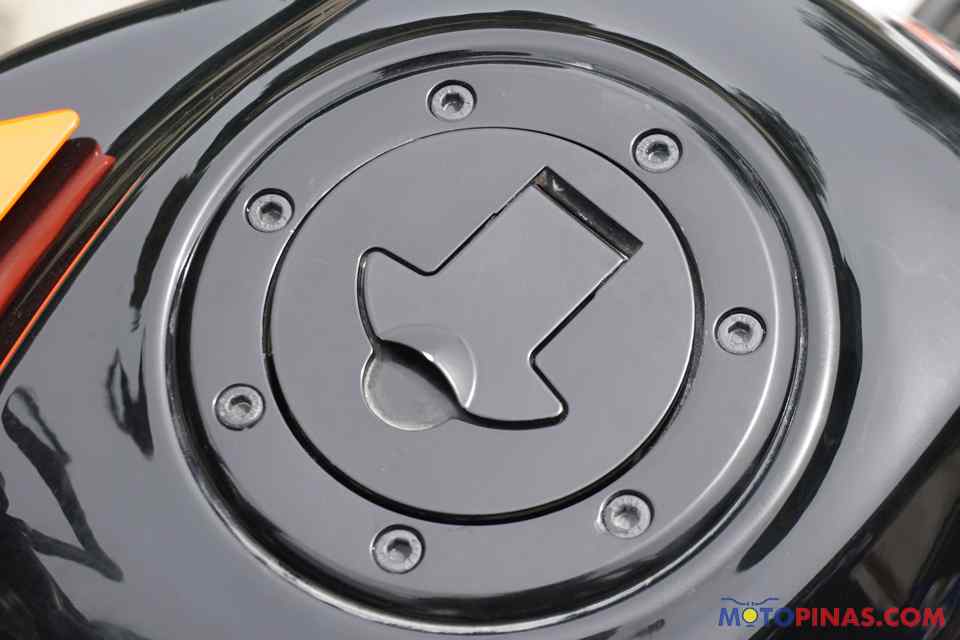 Although the Duke 390 has a huge tank of 13 liters, it doesn’t compromise its overall looks. When I brought home the bike from Baguio City with the wife and our things, I was able to manage a decent 28 kilometers per liter. On another occasion when we rode to Lobo in Batangas that included a 20-plus kilometer offroad stretch, plied the SLEX and STAR tollways then back home, I was able to get a whopping 32 kilometers per liter.

My worst fuel economy reading was 24 kilometers per liter in heavy traffic when I fetched my son from his school in Manila. Overall, the Duke 390 has impressive fuel economy that’s rare for an expressway-legal motorcycle. 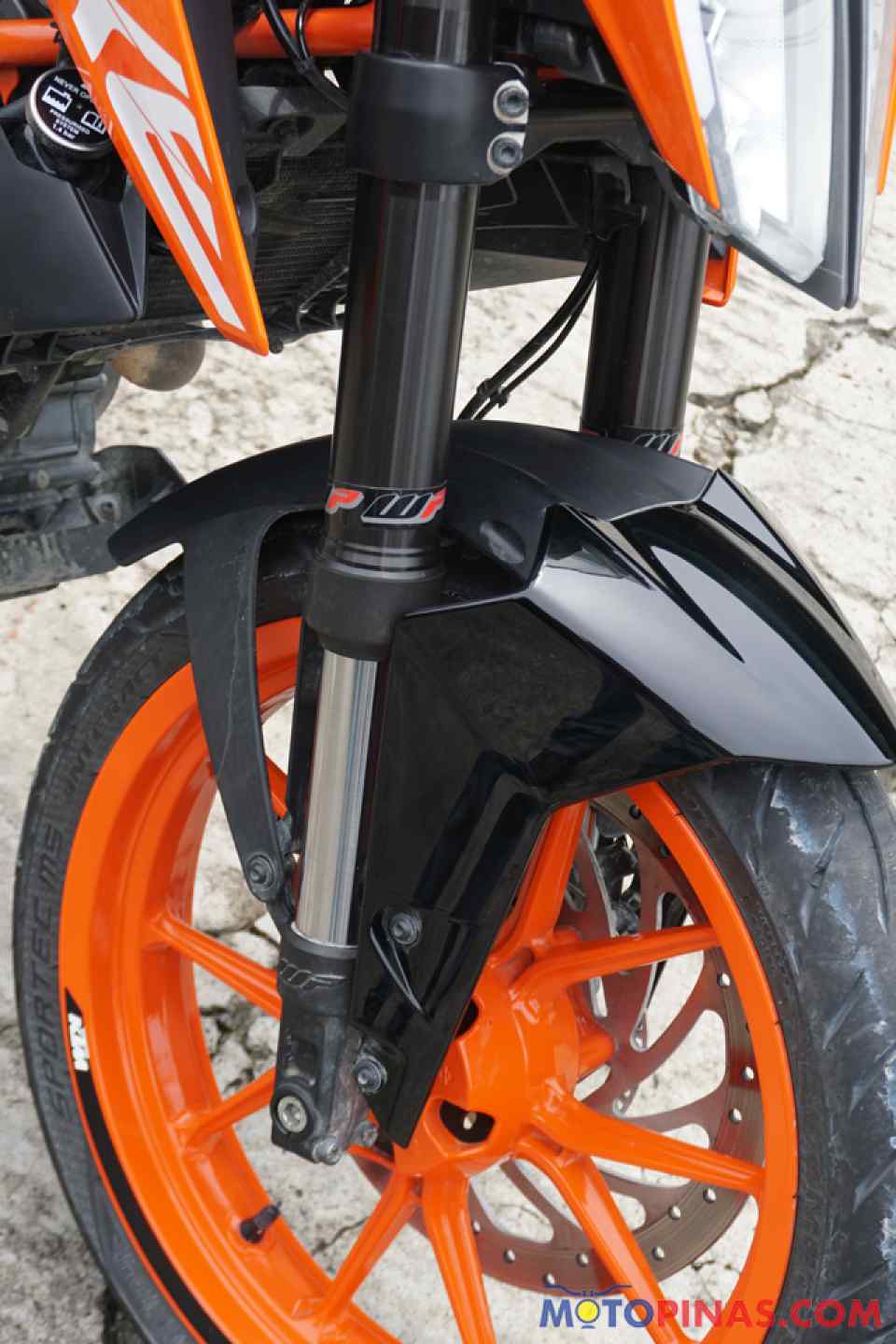 As they say in motorcycle riding school, the motorcycle’s suspension plays a big role in its ability to stop. The front’s 43 mm WP suspension with 142 mm travel absorbs bumps perfectly, yet is still sporty enough for mountain twisty riding. The same can be said about the rear WP mono shock absorber with 149mm travel. 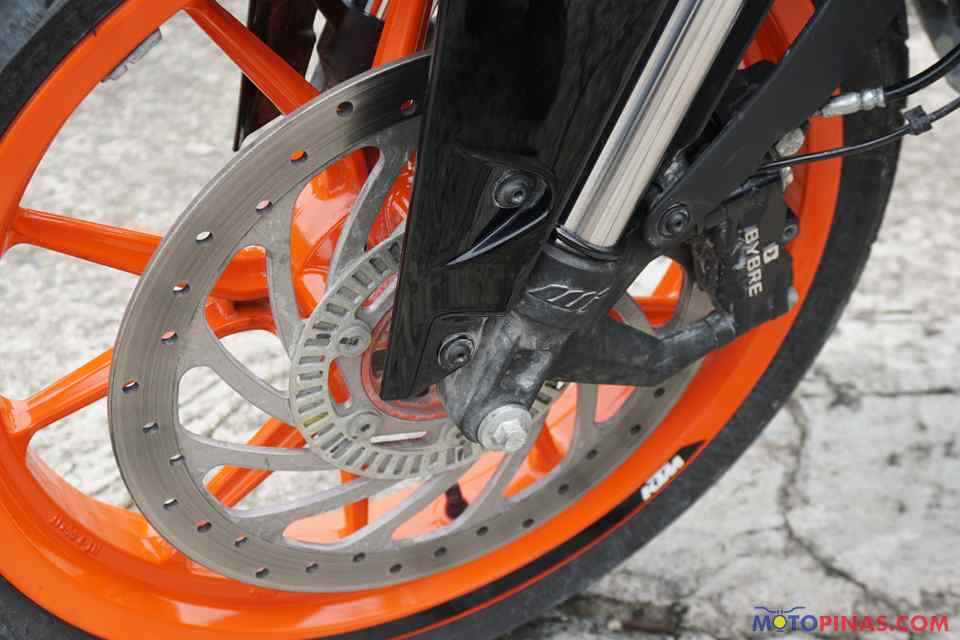 Stopping power is through a 320-mm 4-piston radially-mounted front Bybre disk and a 230-mm single piston, floating caliper rear Bybre disk – all with ABS. The rider has the option to turn it off for more playful riding or select the Super Moto mode (rear off) for some power slides. Just stick with the Road option for both front and rear wheel ABS, which we tested during our little expedition in Lobo. 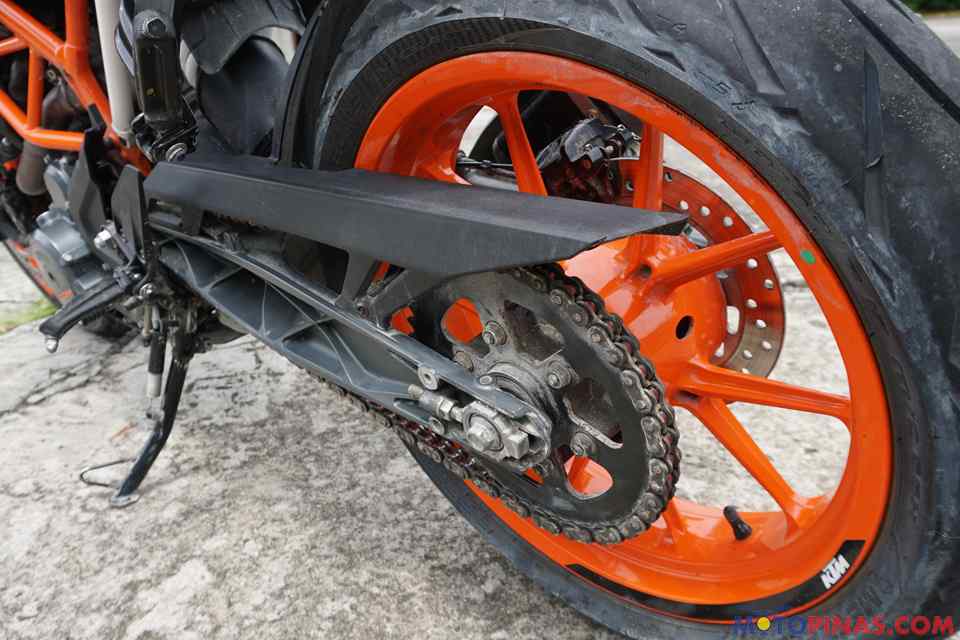 Being a dirt rider myself, I think I’m a bit familiar with the consequences when we hit the brakes hard on dirt. However, with the Duke 390’s advanced ABS software, the bike just kept the traction on dirt even when I tried to brake as hard as I could. The bike just stayed in control and upright. This feature alone can save someone’s life and limb, especially during emergency braking situations. 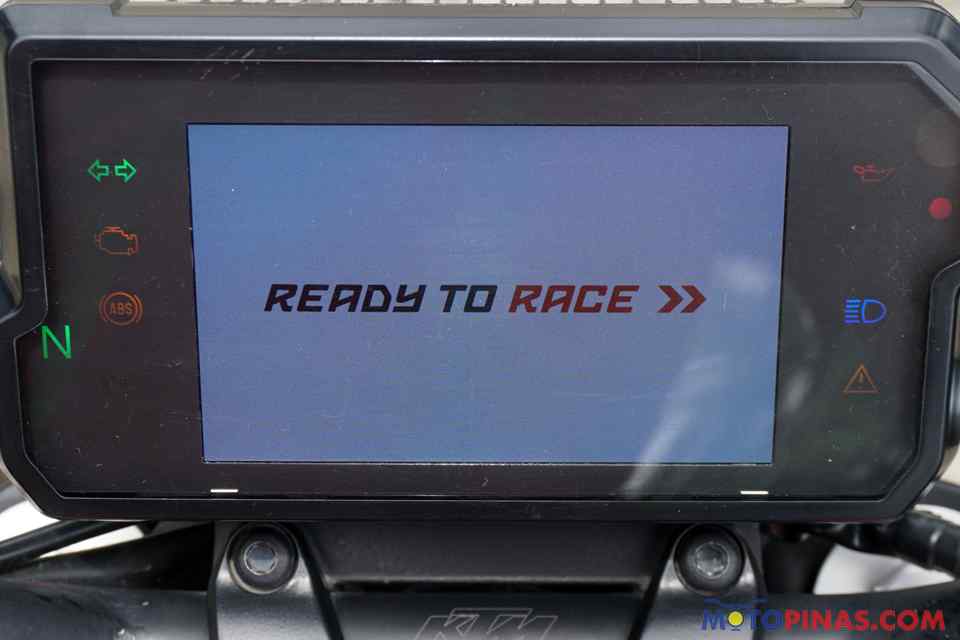 As soon as I posted pictures of the Duke 390 on social media, some of my friends were already asking me about it.

“I heard that the Duke 390 is of bad quality. Is this true?” This is no longer the case. The outgoing Duke 390 may have hurt the reputation of Duke 390, but the 2017-onward models were already refined by KTM and all previous issues were eliminated, save for the moisture building up on the TFT screen. However, I’m sure Adventure Cycle Philippines will take care of this. With so much sophistication and improvement, some reviews from peers consider it as a totally new model.

“Would you recommend it as an everyday city bike?” Yes, the Duke 390 is so light that even lady riders will not have problems riding it in the city. It’s also a perfect weekend bike. The Duke 390 can take you beyond Baguio City (from Manila) in just one top up. The comfortable upright riding position will just make you want to ride the Duke 390 even further. 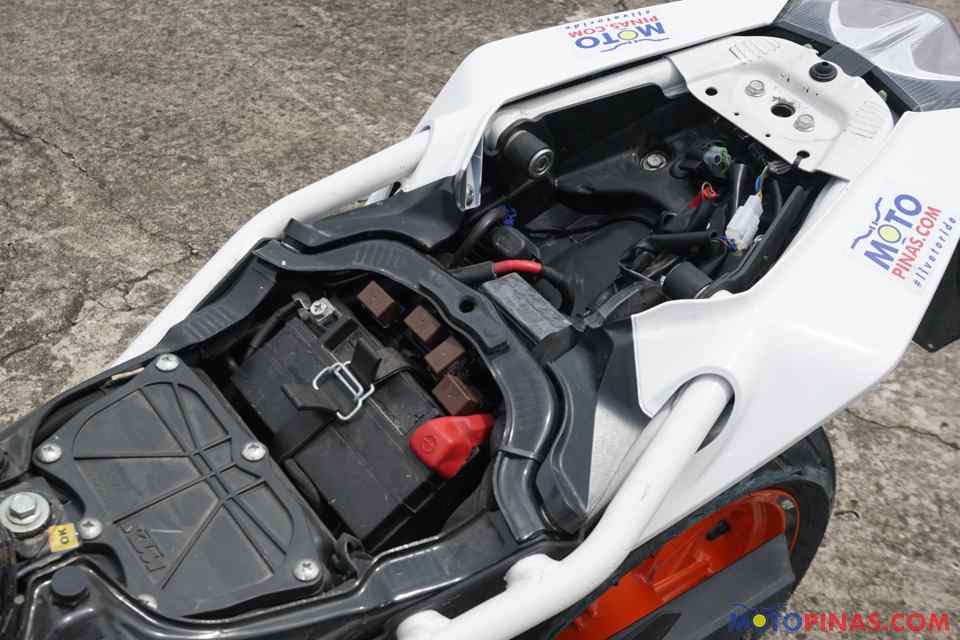 There are many motorcycles out there that have been cool to ride, yet only a few have the “Wow” factor in them like the new Duke 390.

For those that dream of riding the expressways, the Duke 390 can make it a reality. It is perfect for the everyday commute and at the same time perfect for weekend out-of-town rides.

When you buy a Duke 390, make sure to also avail of KTM’s 24/7 Emergency Roadside Assistance through Ibero Asistencia that includes towing, removal and recovery assistance, fuel and spare key delivery, 24/7 concierge service, lodging or travel reimbursement and travel with your Duke 390 worry and hassle free.

We try out BMW's most accessible model, the G310 R. The Moto Guzzi V7 III Special will inject spirit, color, and character into your daily ride.