It’s quite hard for the typical rider to afford a nice car, let alone a BMW motorcycle. With offerings typically priced above P1M, most riders won’t even look int the direction of the German brand. When the news came that BMW Motorrad will be offering its first sub-500cc bike, we got excited. Finally, a star in the sky would be in reach, especially for the average rider. 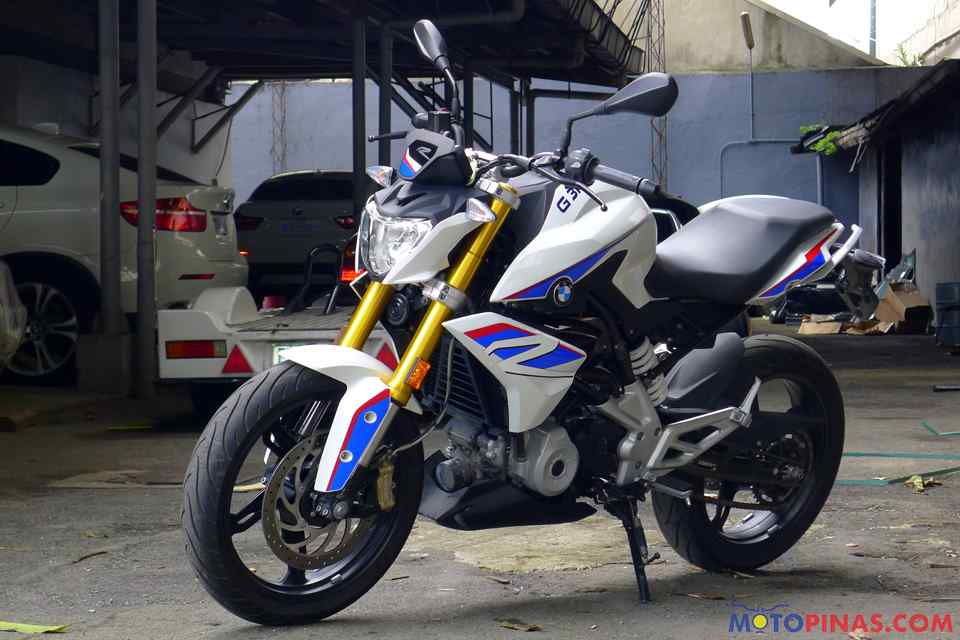 The G 310 concept first appeared in the EICMA Motorcycle Show in Milan, Italy, back in 2015. This highly-anticipated model is the first BMW motorcycle manufactured outside Germany through a technical partnership with TVS. The design and development of the G 310R took more than 5 years to complete, with the Munich R&D Team strictly supervising the production in Bangalore, India. 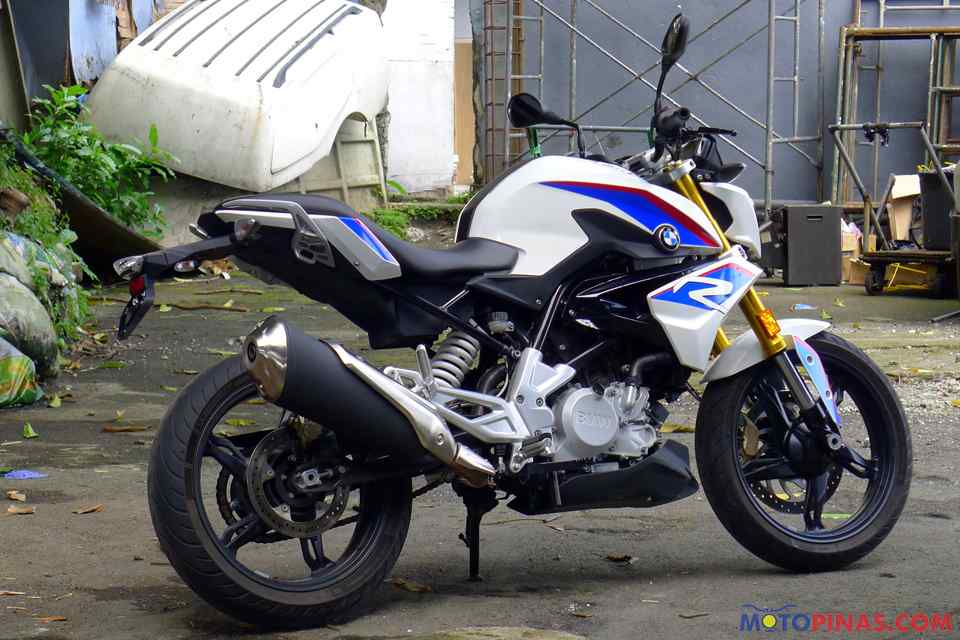 With the keys handed over to us by our friends from BMW Motorrad Philippines, we were delighted to test the G 310R in Manila traffic jams and for a short ride off in Laguna. 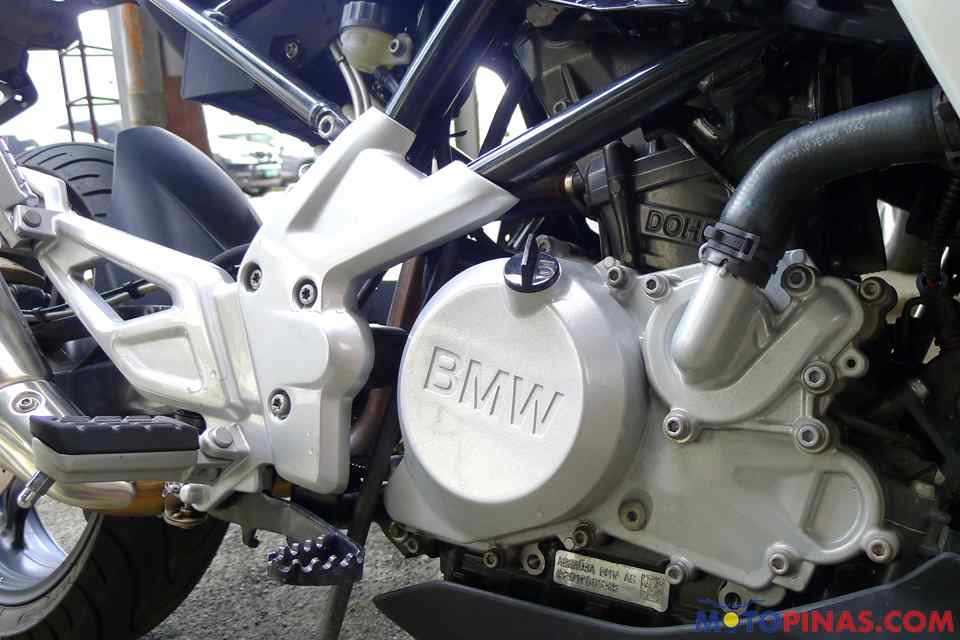 The G 310R is powered by a quite unique powerplant: a backward-tilted liquid-cooled 313cc single-cylinder double overhead cam (DOHC) engine. As opposed to a conventional engine, this thumper’s intake manifold is in front while its exhaust is in the rear. Just imagine a KTM V-engine cut in half – that is how it looks like. The 34 ponies this engine has are then transferred to a 6-speed constant mesh transmission with chain as final drive.

The engine likes to rev, with its usable bottom end power beginning at 4,000-ish rpm until finally kicking in at 6,000 rpm and beyond. While the clutch pull is light, there were quite a few instances of stalling especially during my first few minutes with the G 310R, but that’s part of the expected adjustment period. 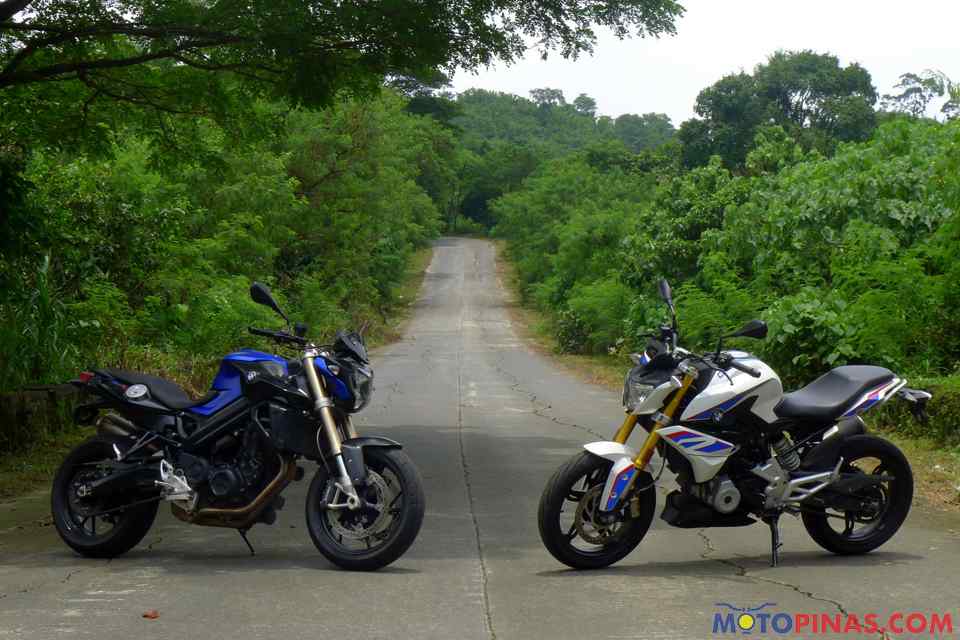 This bike likes the high RPMs like its bigger siblings, the F 800R and the S 1000R. Once I got used to it, it was smooth sailing, even in tight traffic. I didn’t plan to test the G 310R’s top speed, but this bike had a convincing 0-100 kph in just 7 seconds. 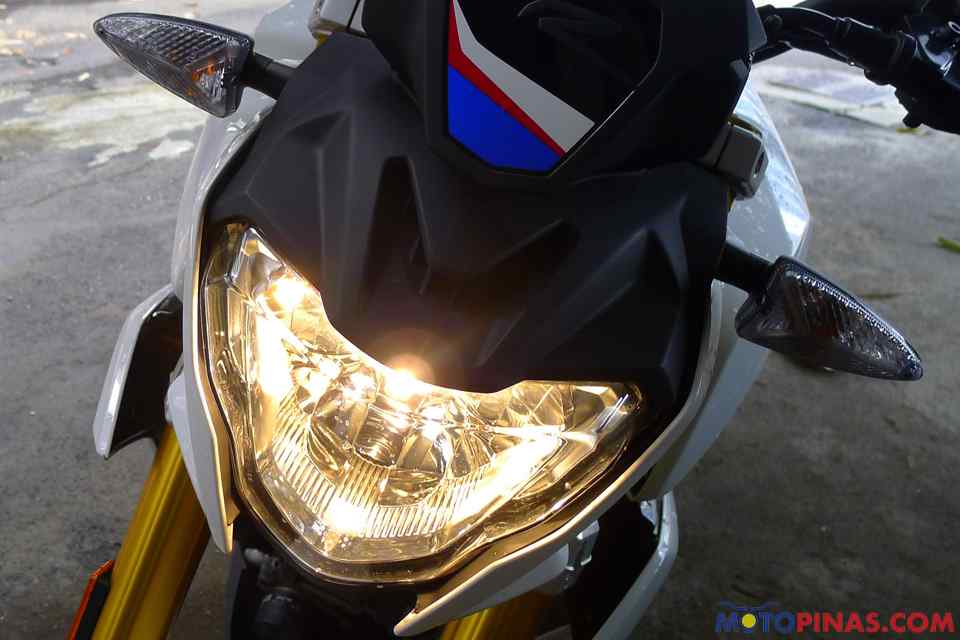 As with all BMW motorcycles, the G 310R is also equipped with the latest ABS package. The styling is somewhat modern with a hint of year 2000-era utilitarian standard bike looks. The front lamp closely resembles that of the F 800R while the tail light is all LED. 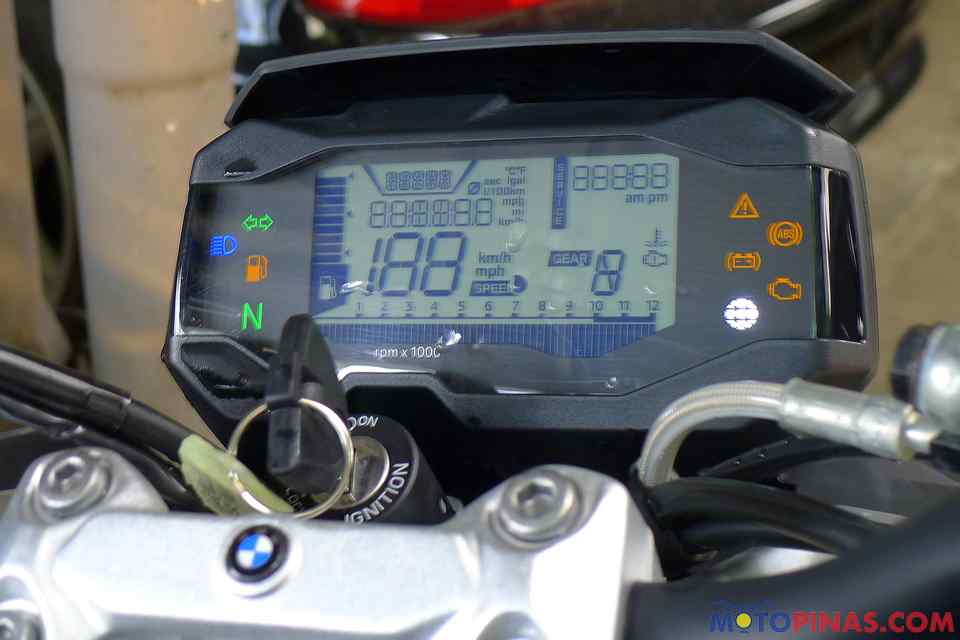 Comparing the Duke 390 to the G 310R is inevitable, as they are practically in the same market segment. Although the display isn’t yet a TFT like that of the 2017-up KTM Duke, the G 310R’s LCD screen is pretty classy and displays all the important stuff a rider needs: gear indicator, trip computer functions including fuel economy, bar graph tachometer, speed and more. What sets the BMW G 310R from the Duke 390 are the details: quality fit fairings, neat welds on the frame and handle bar switch buttons that are at par with BMW’s bigger models. The G 310R just feels like what a BMW motorcycle should be. One friend who owns a KTM Duke 390 even proclaimed that the G 310R’s seat quickly embraced his butt the moment he sat on the bike — that’s how comfortable it is. 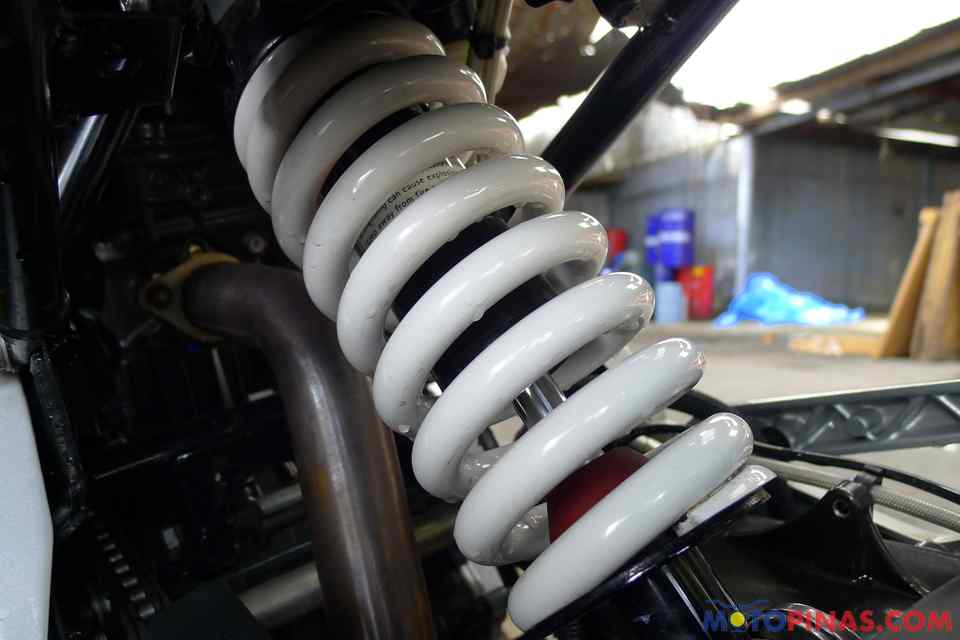 As I set out to test the G 310R, the traffic along C5 in Pasig was at its worst because it was already past 5 pm. The G 310R’s engine was cool with the fan seldom turning on. 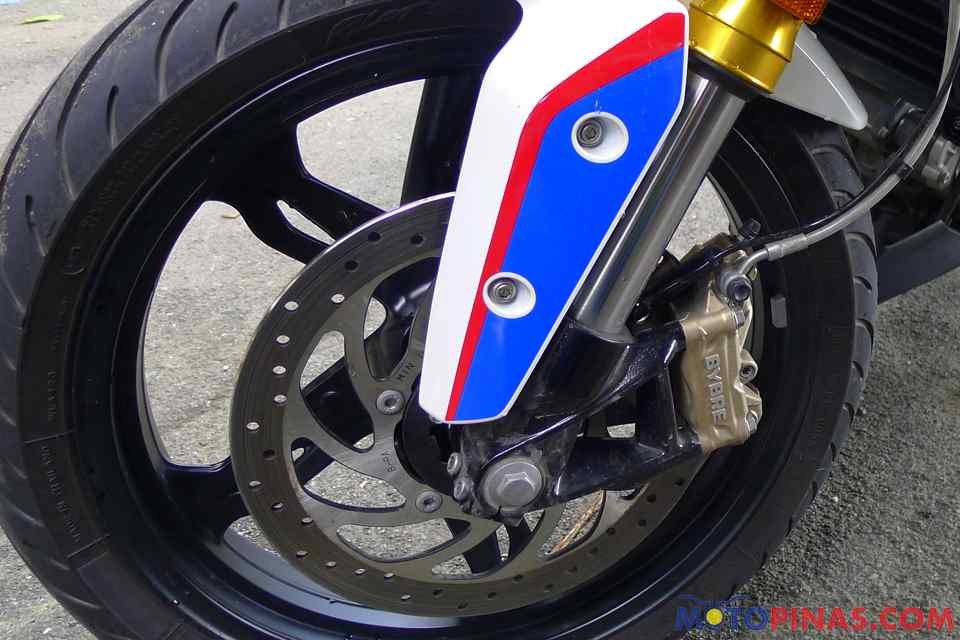 The following Sunday, I met with some friends at Leslie’s Tagaytay for a quick breakfast. Note that these guys all ride liter bikes, but the G 310R never failed to tail them on the twisty downhill from Tagaytay to Tanauan via the famed Sungay Rd., all thanks to the superb KYB suspension performance on the corners, and surgical-accuracy of the 4-piston Bybre caliper for the front and single floating piston caliper for the rear. There was never a moment that the brakes felt faded.

Although I may not have noticed it, the rearward arrangement of the engine may have had an impact on the G 310R’s great handling because of the nearly 50/50 weight distribution of the bike. A pair of Michelin Pilot street tires keeps the bike firmly on the tarmac. 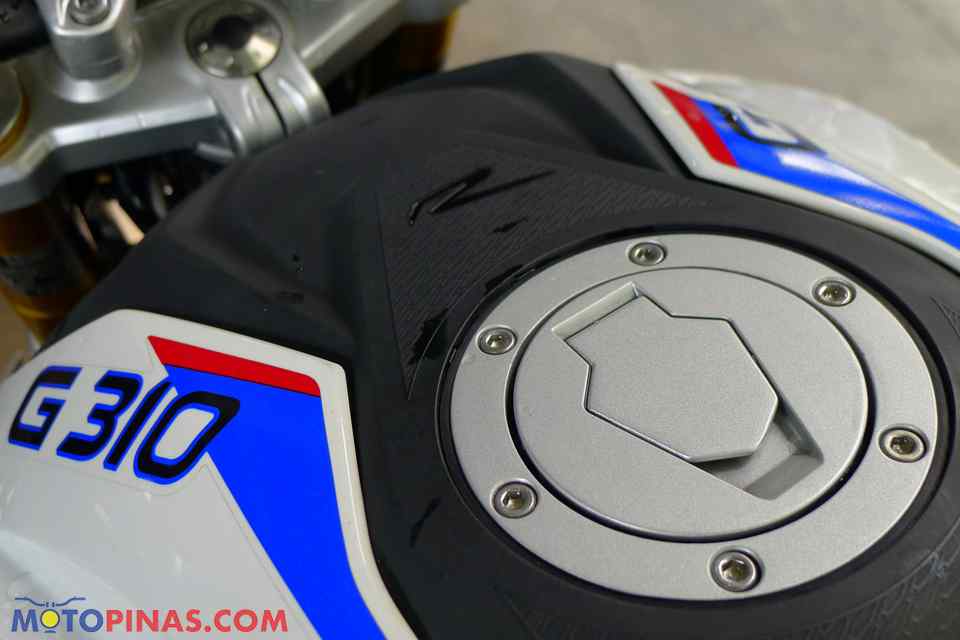 Throughout the entire time, I was able to achieve a combined 27.4 kilometers per liter on one top up. That’s pretty decent considering how excited I am to twist the throttle whenever there’s an opportunity, even during Friday traffic jams. One full tank is pretty much more than enough to get you to Baguio City, including a tour through the City’s busy main thoroughfares.

The entire 200-kilometer trip from my home to Tagaytay City, then to the Laguna Sports Complex for the 9th Anniversary festivities of the Motorsiklo Xklusibo and back home only consumed 7.3 liters of fuel. 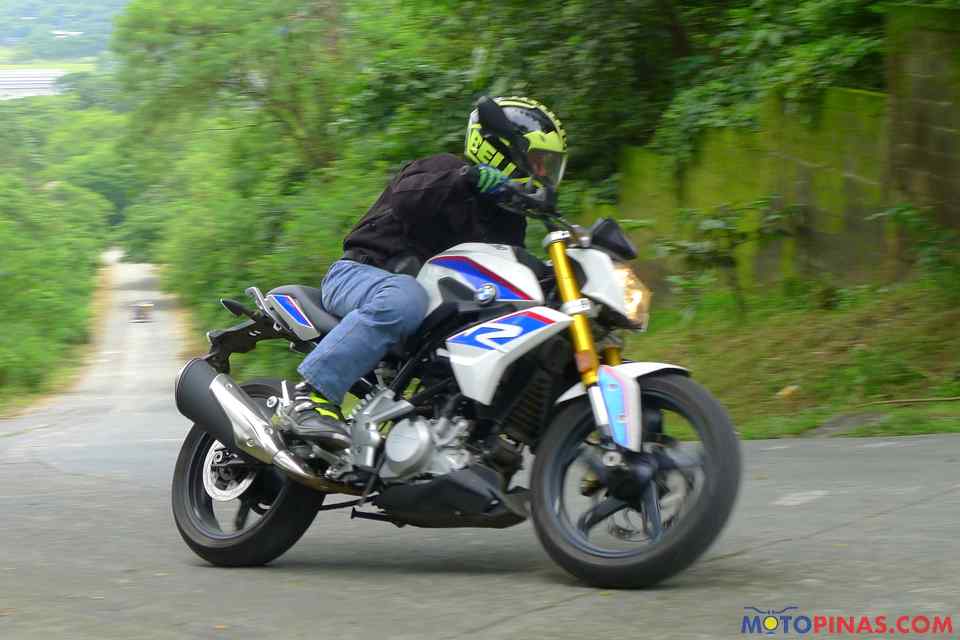 Though a bit mild-mannered compared to the Duke 390, the BMW G 310R still impressed me with its elegance and handling performance. The G 310R is well refined. The LCD doesn’t suffer from inside moisture as found in some Hondas and KTM Dukes.

I found its sweet spot at around 90kph with the vibration at its smoothest. The only thing I would wish is to have the little creature comforts of a USB outlet/ charger added to the Philippine spec model, but it’s not really a big deal considering that there are tons of it readily available on the internet.

Lastly, its lightweight and small size makes it a perfect “everyday BMW motorcycle.” When I say “everyday”, I mean including long rides during the weekend. This bike simply has the right powerband for the city and the long haul; not even intimidating to our lady friends who want to foray into motorcycle riding.

With a tempting price of P300k, ease of use and flexible performance, a BMW motorcycle is finally within reach.

Our resident trail rider tries a sport bike for a change and finds himself smitten. Is it highway legal? Is it reliable? Brando tries out the KTM Duke 390 and answers them.